Home » World News » ‘No timeframe, let alone a date’: France has no immediate plans to speak to Canberra

Paris: France has no immediate plans to restore diplomatic relations with Australia, as Emmanuel Macron and Boris Johnson move to heal a damaging rift triggered by the Morrison government’s new pact to counter China. 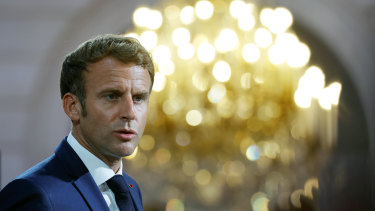 A high-level French government official told The Sydney Morning Herald and The Age that it was far too soon to even consider when its ambassador to Australia, Jean-Pierre Thebault, would return to Canberra after being recalled amid the fallout from a shock deal for the US and UK to help Australia build a fleet of nuclear-powered submarines.

The deal sunk a $90 billion contract between Australia and France for 12 diesel-powered submarines, which Macron had used as a central plank of his strategy to be a major security partner in the increasingly contested Indo-Pacific.

Thebault remains in Paris for “consultations” over the so-called AUKUS pact and how France should re-engage with Australia at the diplomatic, ministerial and leader level.

Asked whether it would be weeks or months before Thebault returns, the official replied: “I’m completely unable to put a timeframe on it, let alone a date.”

The official, who spoke about the government’s deliberations on the condition of not being named, said France had re-engaged with the US and UK but not Australia because “the three countries are not on the same footing”.

“At the end of the day, the strategic decision was an Australian one and that is being taken into account,” they said.

“This is not about French disappointment about losing a contract. This is about a strategic decision that has implications for the whole of Europe. And to address that there is no easy fix.”

Some Australian government ministers have concluded that even if Thebault returns in the coming weeks, relations with France will not begin to thaw until after presidential elections in April 2022. 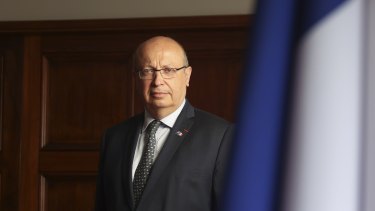 The French ambassador to the US, Philippe Etienne, will return to his post in Washington DC early next week.

A Downing Street spokeswoman said Johnson and Macron used their Friday phone call to “reaffirm the importance of the UK-France relationship and agreed to continue working closely together around the world”, including through NATO.

The AUKUS agreement is particularly sensitive for European security because the US and UK are influential members of NATO.

Johnson had a day earlier told the French to “get over it” and “give me a break” amid sustained outcry from Paris.

Christop Huesgen, a longtime foreign policy adviser to the retiring German Chancellor Angela Merkel and German ambassador to the United States until earlier this year, said the US involvement in the AUKUS agreement was an “insult” to a key NATO nation.

“I don’t know whether that loss has been sufficiently outweighed by the supposed increase in regional security,” he told the Financial Times.

The French government is angry with Australia over three key factors, including that Australia, the US and UK were negotiating behind an ally’s back; and that the Morrison government has downplayed the connection between the submarine contract and Macron’s interest in the Indo-Pacific.

“This is not about disappointment over a commercial contract,” the French official said. “This is way more profound.”

They are also baffled that Australia has torn up a contract for French vessels when the AUKUS agreement only provides for an 18-month review into what sort of nuclear boats the US and UK could help Australia acquire. The cost of the eight vessels is not known, nor is when they will first enter the water.

Macron’s supporters are annoyed at what they say was an attempt on Morrison’s part to give the impression he had spoken with the French President about the submarine decision the night before it was announced in a press conference with Biden and Johnson.

The Prime Minister told reporters last week that he “had been able to directly communicate the decision” to Macron. Asked three days later when he told Macron, Morrison said at about 8pm or 8.30pm the day before the announcement.

Morrison tried to arrange a call with Macron but the French couldn’t or wouldn’t arrange it. Morrison then sent Macron a letter to his phone outlining Australia’s decision.

French fury is also directed at Foreign Minister Marise Payne, who presided over the submarine contact’s birth during her time as defence minister and held a meeting with French Foreign Minister Jean-Yves Le Drian just two weeks before the AUKUS announcement. 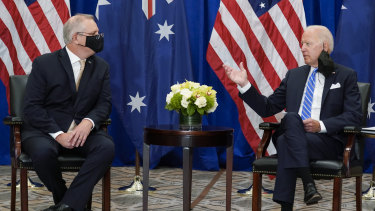 Scott Morrison with US President Joe Biden in New York after the AUKUS partnership was announced.Credit:AP

Payne gave Le Drian no indication the deal was about to be scuttled and even released a joint statement afterwards praising the French-Australia submarine project.

Morrison told reporters in New York this week that the French should have known Australia was considering switching to nuclear submarines provided through the US or UK. He also said it would take time for the relationship to heal.

“I acted in accordance with Australia’s national security interests,” he said.

“That is something that Australia should always do, and I think that all Australians would expect me to do. Hard decisions have to be made by prime ministers about our interests.”

Macron, who has not spoken publicly about AUKUS or the submarine decision, is likely to visit Biden at the White House next month.