Home » World News » ‘Not concerned’: Time to stop worrying about the vaccine rollout?

The Age and The Sydney Morning Herald have launched Examine, a new weekly science newsletter written by national science reporter Liam Mannix. The seventh instalment is below and you can sign up here.

The obvious response to Australia’s COVID-19 vaccine rollout is anxiety and frustration. 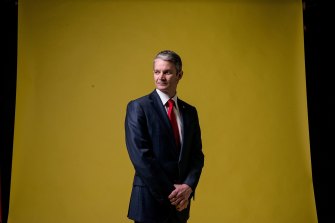 Vaccine shipments to Australia have been blocked, constricting supply. Locally, GPs’ phone lines are melting down, early goals are being missed and full vaccination targets are potentially blowing out to some time in 2022. But not everyone is worried.

“None of this is remotely concerning to me,” says Professor Brendan Crabb, director of the Burnet Institute in Melbourne and one of our best “big picture” thinkers.

“Obsessing about the speed of our vaccine rollout … is blinding us to the much bigger issue of large amounts of circulating virus in the region. That’s where the danger lies for us,” he says.

There are clear teething issues with Australia’s vaccine rollout. The federal government was hoping that 4 million people would have been given their first dose by the end of March. That target slid to April, and now looks unlikely to be achieved. By March 21, just 281,549 doses had been administered.

The single biggest issue is that Australia has not been able to secure the AstraZeneca vaccine it bought. Of 3.8 million doses expected by the end of February, just 700,000 have arrived, due to overseas factories producing fewer than planned and the European Union’s decision to hold back 250,000 doses.

The government cannot control that – and, really, should be lauded for doing the one thing it could do to guarantee supply by ensuring we make our own vaccine in Australia.

But there is also evidence some of the things the government does control have not quite been up to scratch.

Associate Professor Holly Seale, a leading expert on vaccination programs, tried to book an appointment for a vaccination last week. She found almost every aspect needlessly difficult. There was “a lot of complexity that is not needed”, she says.

“We have a little bit of an information void. People out there are not really sure what process they should be using. And that’s where the uncertainty lies.”

I tried the same experiment on Sunday, calling nine practices in Melbourne. None had appointments available; four told me they hadn’t even received their vaccines yet.

The federal government told us those four were mistaken, and their supplies had arrived. I’m happy to accept that in good faith – but the fact the receptionist does not know the vaccines have arrived seems less than ideal.

So, there is evidence of teething problems. 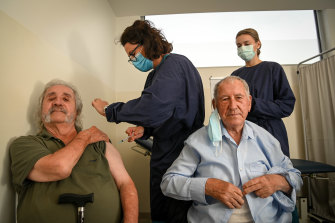 But the more important question is: does it matter? Should we care about a slower vaccine rollout?

No, says Professor Crabb. A delay of a few months will essentially change nothing in Australia.

“In the absence of herd immunity … you will need some level of public health intervention, to run side-by-side vaccines. And probably for ever, as long as we have [the] virus,” he says.

Herd immunity – enough people being immune to prevent the virus circulating – is a pipe dream in the short-to-medium term, because at this stage we’re not vaccinating children and because we expect some vaccine hesitancy.

We might be able to achieve it in the long term, Professor Crabb says. But that relies on new vaccine-resistant variants not turning up.

“We will still have to have border closures, quarantine, no international travel, for quite some time yet,” says Professor Fiona Russell, a vaccine expert at the Murdoch Children’s Research Institute.

“I don’t think our lives will change, in terms of what we’ll be able to do.”

In the short term, there is essentially no significant health or economic benefit to fully vaccinating Australia, professors Crabb and Russell say. 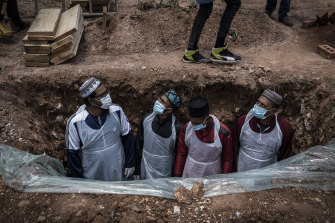 A grave is prepared for a COVID-19 victim in Johannesburg, South Africa, where a hyper-infectious strain of the coronavirus has spread.Credit:AP

But that only applies to Australia. In other countries, with raging outbreaks, vaccines can save lives now.

Italy stopped a shipment of vaccine to Australia because 5157 people have died from COVID there in the past fortnight. More than 100 countries are yet to receive a single dose.

“Papua New Guinea, might, in the next month or so have between 100,000 and 1 million people infected, with who knows what variants,” says Professor Crabb.

In Australia no one has died from the virus since December.

Sadly, given the global supply crunch, vaccines are a zero-sum game. Every dose injected in Australia is one less injected elsewhere in the world.

And here’s the important thing people miss. Every time SARS-CoV-2 replicates inside an infected person there is a small chance it will make a copying error that generates a nasty variant.

Out-of-control outbreaks around the world will continue to spew out new variants, each potentially challenging our vaccine. Every unvaccinated person in the outside world increases Australia’s risks even when fully vaccinated.

Stopping the global pandemic is what will keep us safe.

“The best protection for our own vaccine program is to not have mutant viruses,” says Professor Crabb.

Science and health explained and analysed with a rigorous focus on the evidence. Examine is a weekly newsletter by science reporter Liam Mannix. Sign up to receive it every Tuesday.

Is Jac Naylor leaving Holby City and does she die?

Drew Barrymore Dishes On 'Terrible' Dating App Experience: 'It Was A Car Wreck'

Denise Richards Feuds With ALL the Housewives in RHOBH Reunion Teaser