World leaders have expressed their sadness as a devastating fire broke out at the iconic Notre-Dame cathedral in Paris, one of the world’s most famous and popular tourist attractions.

French President Emmanuel Macron said he was “so sad tonight to see this part of all of us burn” and declared a national emergency.

Mayor of Paris Anne Hidalgo tweeted: “I don’t have words strong enough to express the pain that I feel when I see the Notre-Dame ravaged by flames.

“Tonight, all Parisians and French people weep for this emblem of our communal history. Our motto will give us the strength we need to raise ourselves up again.”

Speaking to television news channel BFMTV, her deputy, Emmanuel Gregoire, said the Notre-Dame cathedral had suffered “colossal damages” from a fire that started in the spire and caused it to collapse.

UK Prime Minister Theresa May tweeted: “My thoughts are with the people of France tonight and with the emergency services who are fighting the terrible blaze at Notre-Dame Cathedral.”

Foreign Secretary Jeremy Hunt said he was “thinking of all our friends in France tonight. Heartbreaking for the millions who love this great cathedral and great city across the world. Wishing you all the best in tackling the blaze and its consequences”.

London mayor Sadiq Khan declared the British capital stood “in the heart of Paris, and in friendship always” – and described the scenes at Notre-Dame as “heartbreaking”.

The UK ambassador to France, Edward Llewellyn, called the images “tragic” and added: “All our thoughts [are] with the heroic firefighters.” 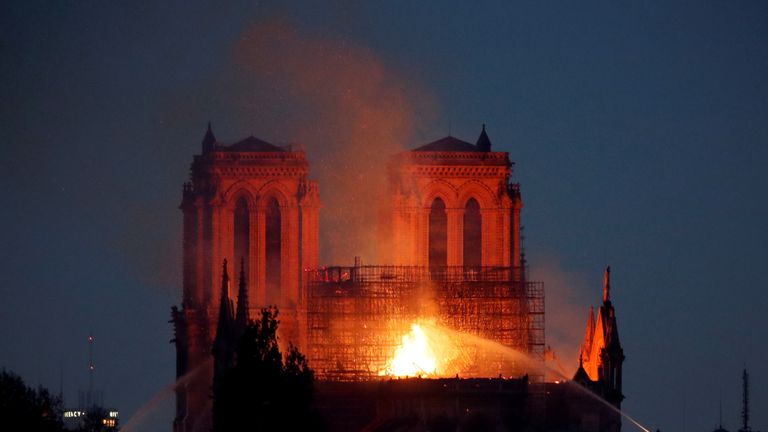 German Chancellor Angela Merkel called the cathedral “a symbol of France and our European culture” and sent her thoughts to “our French friends”.

Donald Trump also expressed his sadness on social media, saying it was “so horrible to watch the massive fire”.

Former US president Barack Obama described the cathedral as “one of the world’s great treasures” and added: “We’re thinking of the people of France in your time of grief. It’s in our nature to mourn when we see history lost – but it’s also in our nature to rebuild for tomorrow, as strong as we can.”

The Vatican issued a statement about the “terrible fire” which “devastated” the iconic landmark, saying: “The Holy See has seen with shock and sadness the news of the terrible fire that has devastated the Cathedral of Notre Dame, symbol of Christianity in France and in the world.”

It said the Vatican was praying for firefighters “and those who are doing everything possible to confront this dramatic situation”.

The Louvre Museum, another famous and popular tourist attraction in Paris, tweeted that the fire was “a tragedy for the world heritage of mankind” and expressed its “profound emotion and its strong solidarity with the teams that are currently fighting against the flames”.

NASA wants to send a helicopter to Mars

Kate Middleton, Prince Harry and Sophie Wessex – all the royals you can listen to on podcasts

Movies Like To All the Boys I've Loved Before to Watch