Belgrade: Beaming from the top shelf in the darkest corner of the cocktail bar at Barblija is a lit black and white sign with the words Jedan je Novak.

“One is Novak,” the muscular bartender literally translates, but its meaning is “There is only one Novak”. 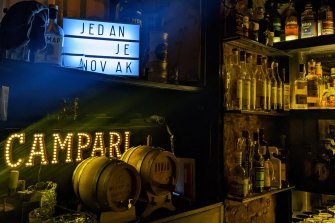 For those wondering how locals reacted to the sound of Australian accents on the streets of Belgrade as Novak returned home after the Australian Open debacle, the answer is with warmth, friendship and hospitality.

Even when construction workers hoping for a glimpse of the tennis star specifically sought out Australian journalists among the media throng, they blew kisses, winked and laughed as they joked “deport”, gesturing for me to move towards the terminal departure gates. 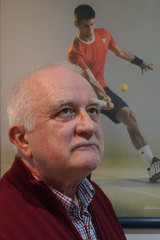 Dusan Janjic, Serbian analyst, in front of a poster of Novak Djokovic at the Gemax tennis club in Belgrade.Credit:Oliver Bunic

There was no animosity directed towards the Australian people, only a sense of wounded Serbian pride and injustice that had been meted out to the man who put Serbia’s name up in lights on the global stage for something not related to the Balkan wars.

Dusan Janjic is renowned in Serbia and was in Dayton, Ohio, for the signing of the peace accord that ended the Bosnian war in 1995.

The Serbian political analyst, commentator and legal practitioner was one of the tens of thousands who watched last week’s Federal Court hearing on Djokovic’s extradition from Australia on YouTube.

“Now I’m not trusting your rule of law, not because Novak is innocent or something, but because in the middle of the process, the prosecutor representing the minister changed the accusation,” he says.

“It’s a political game. Unfortunately, Australia’s Prime Minister and Immigration Minister are not different to Balkan ministers, they’re the same kind of people, people who are harassing everything including the law.

“I was really believing ‘Balkanisation’ was a term for the Balkan people – Balkanisation means quarrelling about everything and including the small details – but now I realise that’s the global political culture.

“[Prime Minister] Scott [Morrison] and the other people – they’re really good examples of the Balkanisation of the policy.”

As Janjic sees it, the Djokovic saga is the result of a society as divided as those in the Balkans. And the similarities don’t end there. He identifies a “chauvinistic” culture in Australia and the Djokovic family.

The 84-year-old has known Djokovic’s father Srdjan for 20 years – against whom he’s hit many a tennis ball – and Novak since 2012.

He says there are two Novaks: one, a globalist, humanitarian and philanthropist who speaks five languages; and the other, the product of his family, in particular his father.

“He presented himself as a nationalistic-oriented guy who was also against virus rules,” Janjic says.

“He’s basically not educated, trained to believe in science, it’s more believing in some kind of destiny.”

It was not just an image. Indeed, Djokovic showed a disregard for COVID rules when he admitted to mixing with the public despite knowing he was positive for the virus.

In their reasoning for deportation, the Federal Court justices said it was this behaviour that made it “open to infer that this, if emulated, may encourage an attitude of breach of public health regulations”.

Janjic points to Djokovic’s upbringing as an explanatory factor.

“He was not that fully educated, he was completely focused on tennis … he’s basically not educated, trained to believe in science, it’s more believing in some kind of destiny,” he says. 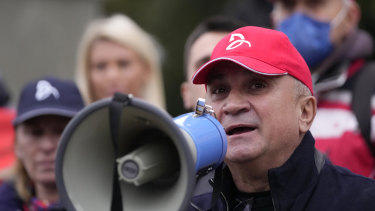 Novak Djokovic’s father Srdjan speaks during a protest in Belgrade, Serbia, claiming his son was the victim of a “political agenda”.Credit:AP

The family is Serbian Orthodox and while it is common in Serbia for the eldest sons to be venerated, the Djokovics have deified their son.

“Novak is like Christ,” says Janjic. “It’s a really confused identity in the family.”

The Djokovics threw their life and finances behind supporting their son’s quest for sporting genius but Janjic says Srdjan has also been a bad influence on his son, describing his comments after Djokovic’s detention in Melbourne last week as “stupid statements”.

“Jesus was crucified on the cross, and everything was done to him, but he is alive among us even now. Now Novak is being crucified, they are doing everything to him,” Srdjan told the press after his son was sent to a hotel the Australian government normally reserves for asylum seekers. 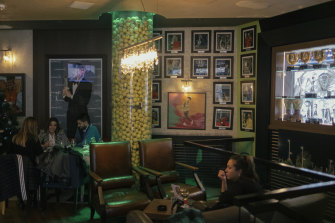 The Djokovic family restaurant ‘Novak’ doubles as a shrine to the Serbian national hero. Credit:Getty Images

“The father is chauvinistic-orientated, this family is quite in the mind of the father, traditional and patriarchal,” Janjic says.

The family usually holds court at their Novak restaurant in Belgrade which serves as a shrine for the faithful to venerate the 34-year-old tennis star. Photos of Djokovic on court line the walls and his trophies are held in glass cases.

When they thought their son would be victorious in the court, they were promising to hold a media conference but cancelled after Djokovic’s loss and deportation. The tennis star too has vowed silence until the Australian Open is over.

He was thought to be holed up in his penthouse a few blocks away in new Belgrade, close to where he grew up.

What Djokovic is contemplating as his next moves is critical to his future. 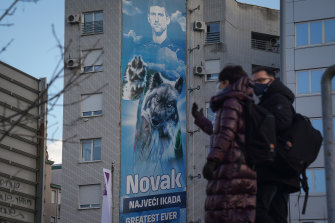 “I love him so much, and that’s what you can see from my artworks dedicated to him,” says Andrej Josifovski, a street artist whose giant portraits of his hero have been promoted by Djokovic on his official website.

“He is proud of all of us who speak Serbian and feeling like Serbs, and not only Serbian, I can say Yugoslavian.

“He fights for the freedom of every human being today. He is our best ambassador and we are all standing with him.”

While the freedom-crusading, nationalist message is heard in Serbia, outside the country, Djokovic is now branded an anti-vaxxer after the saga in Australia.

And this has financial implications.

“As soon as possible, we will be in touch with Novak Djokovic to review the events that have accompanied his presence in Australia,” said a spokesperson from French sponsor Lacoste.

A week has passed and there has been no update from either Team Djokovic or Lacoste. 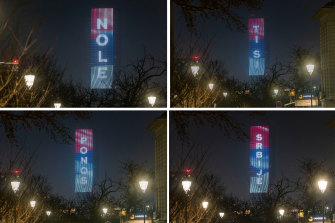 The Belgrade Tower, still under construction, being illuminated with the national colours and a message to Novak Djokovic reading “Nole, you are the pride of Serbia”.Credit:Oliver Bunic

Brand Finance, a firm that analyses prominent personal brands, estimates Djokovic’s total value to be upwards of $US179 million ($249 million) and his current annual income from sponsors at around $US35 million.

Losing Lacoste could mean a financial hit of as much as $US64 million, according to Hugo Hensley, who heads the firm’s sports service.

“Personal brand in tennis can clearly be a huge driver of value, which gets more pronounced at the top; Federer is reported to still make almost three times the sponsorship income as Djokovic at the age of 40,” he says.

“Depending on the future of Djokovic’s movements, his sponsorship appeal could drop from being fully brand-driven, to be primarily exposure-driven.

“A brand-driven partnership is one where the sponsor is hoping to attract positive attributes to their brand through association with a strong [name], whereas weaker sports brands may have to settle for sponsors just looking to get in front of as many eyeballs as possible.”

If Novak is to save Brand Djokovic, Janjic says he needs to spend less time in Serbia and part ways with his overtly nationalistic and new-age wellness beliefs, at least publicly.

“He has to prepare a completely new business plan – it’s new mathematics for Novak,” says Janjic.

But there are signals Djokovic will continue to fight. British tabloid The Sun cited a source close to the player’s agent saying that Djokovic could sue Australia for the lost prize winnings.

There are also reports that a fly-on-the-wall documentary is in the works for Netflix. The production company reported to be producing the documentary did not respond to a request for comment.

In Serbia, there is no doubt Djokovic remains the “One”. But whether he can win a 21st grand slam without being vaccinated, and seal his reputation as the GOAT – Greatest of All Time – depends on his next serve.

‘The Bachelorette’s Chad Johnson Was Arrested For Alleged Domestic Violence