Home » NY man bragged about Capitol riot on Bumble; his match turned him in

A New York man was arrested Thursday after allegedly bragging on the dating app Bumble about his involvement in the deadly riot at the U.S. Capitol in January, according to reports.

Robert Chapman of Carmel, N.Y., reportedly matched with the woman about one week after the Jan. 6 riot, telling her he “did storm the capitol” and “made it all the way into Statuary Hall.”

The woman wrote back, “We are not a match,” then contacted the police. She provided screenshots to the FBI, which also show the suspect naming reporters and news outlets he spoke to, Newsweek reported. 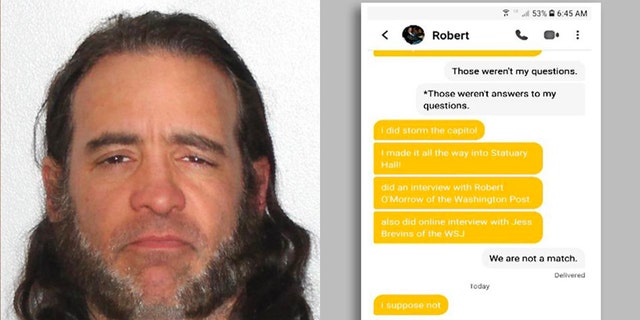 The FBI said Chapman’s bragging was not limited to the one dating app encounter: He allegedly posted on Facebook about the insurrection, even updating his profile picture to a selfie from the riot, The Seattle Times reported.

Another Facebook user posted a photo of Chapman posing in Statuary Hall, saying, “My Dear friend and Brostar Robert made it in the Capitol building at the protest yesterday. Wooo Hooooooooo!!!!”

Chapman was released on bail conditions, with a preliminary hearing scheduled for May 19, according to court documents.

WNBC reported that Chapman’s hearing, via teleconference, ended with his release on his own recognizance.

Chapman’s identity was confirmed through surveillance footage from the siege as well as a mugshot from an arrest in 2017 over undisclosed charges.

OREGON TEACHER: WHITE EDUCATORS SHOULD BE ‘AS BOLD’ AS CAPITOL RIOTERS IN ANTI-RACISM PUSH

Dating apps have proven a useful tool in tracking alleged participants of the Jan. 6 riot, with users reporting others who posted pictures from the incident. Others, like Chapman, openly bragged about their involvement.

Attorney information for Chapman was not immediately available.

Will Starbucks Be Open On New Year’s Eve 2018? You Can Ring Out The Year With Your Faves