Under the terrifying admission, half the people living in the city will get the disease, and if the current trajectory remains the same, at least 40,000 could die.

De Blasio said: ‘It’s a fair bet to say that half of all New Yorkers and maybe more than half will end up contracting this disease.’

Health commissioner, Dr. Oxiris Barbot, added: ‘We think 50 percent by the end of this epidemic, this pandemic, so by the time September rolls around likely 50 percent, but it could also be much higher.’

De Blasio also told New Yorkers  not ‘cling to the false hope’ of reopening by Easter after President Donald Trump defied expert advice and suggested that date for lifting lockdowns.

And he slammed Mitch McConnell for ‘standing in the way’ of the funding ‘we need’ as the $2 trillion economic rescue package continued to hit snags in Washington.

De Blasio also noted that the city now makes up a third of all cases in United States – with 17,800 of the total 60,000 nationwide and with nearly 200 deaths as of Wednesday evening.

Labeling the coronavirus pandemic ‘a growing crisis and growing challenge’ he told New Yorkers to ‘not let their guard down’. Doctors in the city have described an ‘apocalyptic’ surge in patients in overwhelmed hospitals.

De Blasio added: ‘April is going to be tougher than March, and I think at this point, May could be even tougher than April. People need to be ready for that.’

Dismissing the president’s comment earlier in the week, de Blasio said: ‘The notion that everything might be fine by Easter, I don’t know where on Earth that idea comes from.’ 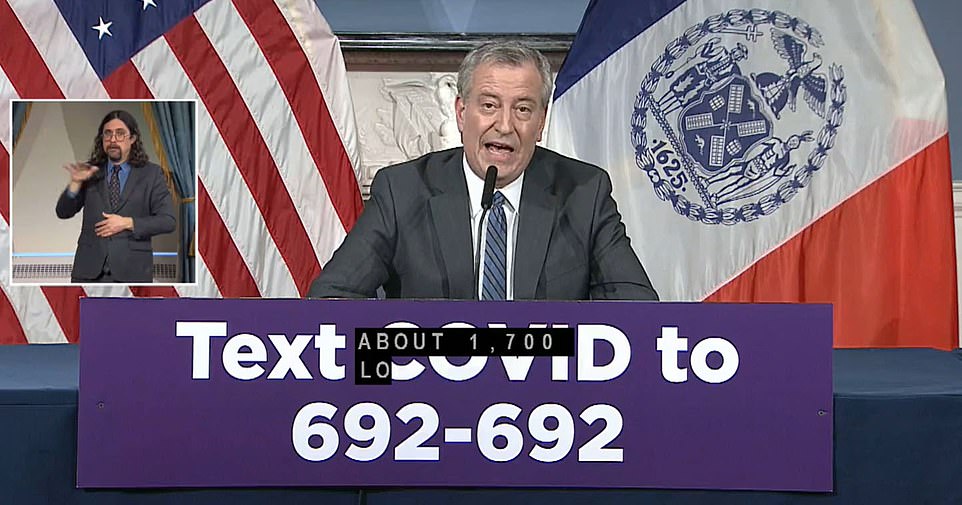 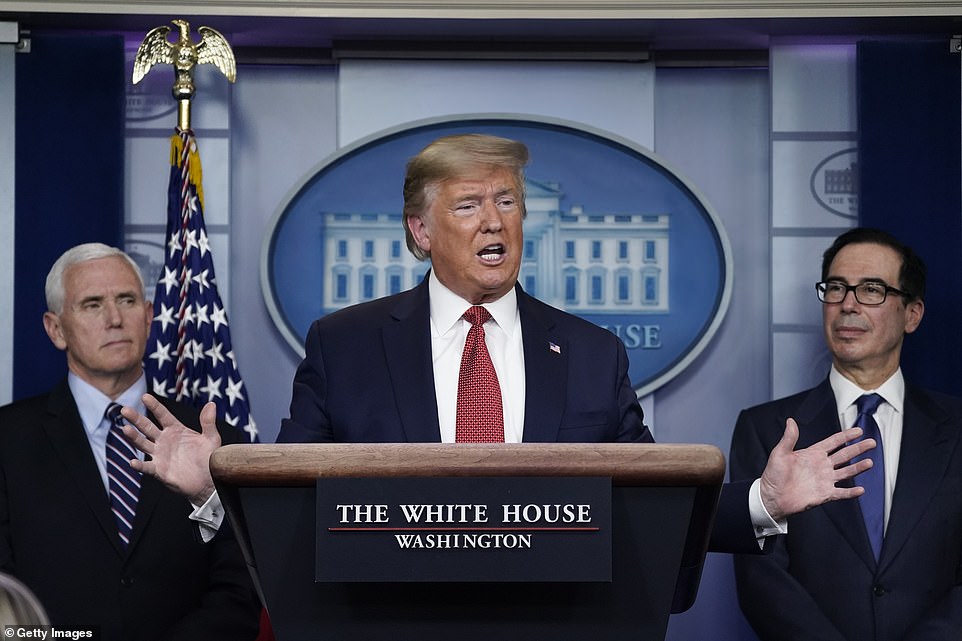 De Blasio warned residents to not ‘cling to the false hope’ of reopening by Easter after President Donald Trump, pictured Wednesday, suggested that date for lifting lockdowns 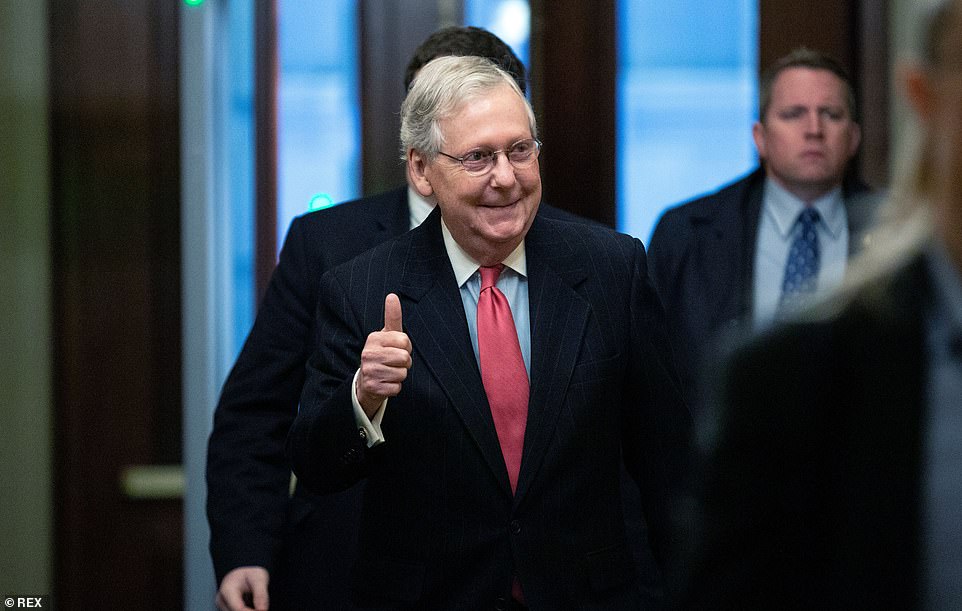 De Blasio had firm words for Senate Majority Leader McConnell, who he called a ‘roadblock’ and whose actions he labelled ‘immoral’.

He said he would called President Trump directly to appeal for financial help adding: ‘Giving New York City $1 billion out of $150 billion pool. We are one-third of the cases in this country right now. Someone do the math down in Washington.

‘Less than one per cent of funding and we have a third of the cases. That is just immoral.

He thanked Democrats Nancy Pelosi and Chuck Schumer and said supplies from federal and state government have been a ‘ray of light’.

US coronavirus death toll rises to 823

The coronavirus death toll has risen to 823 in the United States with more than 60,000 confirmed cases as the burdens of the pandemic continue to intensify across the country.

New figures released on Wednesday show that New York, which is the epicenter of the US outbreak, now has 50 percent of the country’s total confirmed coronavirus cases.

Washington state, which was initially the epicenter following an outbreak at a Seattle nursing home, now has 2,472 confirmed cases and 125 deaths.

California is reporting 2,675 cases and 59 deaths, including the first child after a 17-year-old boy with no known pre-existing conditions died.

But he said the goal is to have 15,000 ventilators, warning that the city was ‘a sixth of the way there’.

Dr. Ashley Bray, 27, a medic at Elmhurst Hospital Center in Queens, told The New York Times: ‘It’s apocalyptic.’ In 24 hours 13 people have died of coronavirus at the hospital, including a 38-year-old man.

De Blasio told CNN on Wednesday: ‘We are concerned about how many people are contracting the disease.

‘I mean, I’ve been honest with New Yorkers. Probably before this is over, half of all New Yorkers, if not more, will contract this disease. Thank god 80 per cent of them will have a very mild experience.

‘Even a lot of the folks we’re talking about, the health care workers, if they’re younger, if they’re healthy, they’ll probably miss work a week, ten days.’

In response to the growing surge of patients at NYC hospitals students at NYU’s Grossman School of Medicine were able to graduate early to join in the fight.

A spokesperson told TIME: ‘In response to the growing spread of COVID-19, and in response to Governor Cuomo’s directive to get more physicians into the health system more quickly, NYU Grossman School of Medicine and NYU have agreed to permit early graduation for its medical students.’

New York Gov. Andrew Cuomo has already said: ‘I’m telling you, these numbers don’t work.’ Cuomo said the Senate package would send less than $4 billion to New York, far short of his estimate that the crisis will cost his state up to $15 billion over the next year.

Noting the military presence in the city de Blasio called the soldiers ‘real heroes’ and welcomed the ‘real boost’ they have given.

But he also announced the city would be removing the hoops from 80 basketball courts where New Yorkers have repeatedly ignored social distancing advice.

De Blasio also said 200 low risk inmates will have been released by Wednesday evening with more planned Thursday in his daily briefing.

New York Gov. Andrew Cuomo had earlier said that new evidence suggests social distancing is ‘working’ in slowing down coronavirus, with the rate of hospitalizations slowing every day this week, but that we were ‘still on our way up the mountain’.

Across the state, there have been 285 coronavirus deaths, including at least 192 in New York City.

In the most extreme measures to date, 17 states have ordered 100 percent of non-essential workforces to stay home to help curb the spread of COVID-19.

Locked down: 6.9 million locked down

The current hospitalization rate is 12 percent – a worrying figure especially given the looming ‘peak’ of cases which is expected to inundate hospitals in just three weeks. Three percent of cases require ICU.

That means there are currently 888 people in the state of New York needing intensive care and experts say the city’s hospitals are already close to overrun.

Gov. Andrew Cuomo stressed the need for more equipment – specifically ventilators – but said the arrows were pointing in the ‘right’ direction.

‘Evidence suggests density control is working. On Sunday, the projection was hospitalizations doubling every two days.

He told CNN: ‘Governor Cuomo is speaking about a certain period of time where he’s going to be running out. He’s now getting help with ventilators, with masks and others. Hopefully that will be enough. I think it will be.

‘You’re getting private industry involved in making more of these things that we need.’

The plan by the White House and Senate leaders to jam through an immediate vote on a $2 trillion coronavirus bailout package came under threat Wednesday after a trio of Republican senators dug in against a provision to provide a boost unemployment insurance.

The GOP senators said unless their objections are met they won’t go along with Majority Leader Mitch McConnell’s plan to seek unanimous approval to cut off debate on the bill.

Their opposition to the move provoked immediate pushback from Vermont Sen. Bernie Sanders – who said unless they back down he is prepared to stall the bailout to get new restrictions over its $500 million bailout fund.

‘In my view, it would be an outrage to prevent working class Americans to receive the emergency unemployment assistance included in this legislation,’ Sanders said in a statement. He said he was prepared to put a ‘hold’ on it if they don’t back down.

He tweeted his comment to a reporter that ‘I cannot at the last minute allow some right wing senators try to undermine the needs of workers and think they are going to get away with that.’

A group of three Republican senators claimed language in the bill mistakenly gives an incentive for some workers to lose their job because they would make more money from the government benefits than they would keeping their job.

Senators Lindsey Graham of South Carolina, Tim Scott of Florida and Ben Sasse of Nebraska released a statement Wednesday claiming they would vote against the unanimous consent measure, which could delay the fast-tracking of the relief package. Graham is a key ally of President Donald Trump.

‘A massive drafting error in the current version of the coronavirus relief legislation could have devastating consequences: Unless this bill is fixed, there is strong incentive for employees to be laid off instead of going to work,’ the statement read.

‘We must sadly oppose the fast-tracking of this bill until the text is addressed,’ it continued.

‘This bill pays you more not to work than if you were working,’ Graham told reporters.

Also joining the trio was Sen. Rick Scott of Florida, who said ‘we cannot create an incentive for people to say I don’t need to come back to work.’

The package boosts the maximum weekly unemployment benefit that states provide by $600, as economists fear a surge in layoffs linked to the coronavirus and the shuttering of U.S. businesses.

If the senators follow through on their threats, it could stall the effort for days. McConnell wants to fast-track it by getting unanimous consent from senators. Without unified support on the bipartisan deal, he would have to schedule a procedural vote wait for time to tick off the clock.

A delay might require further horse-trading, as more lawmakers and staff get the chance to pore over detailed legislative language. 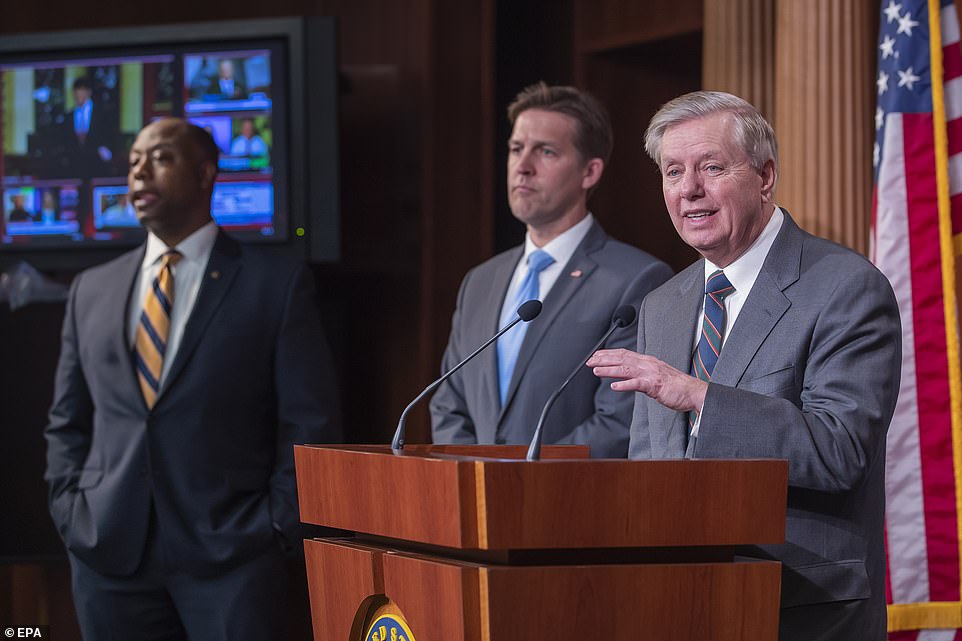 McConnell said Wednesday that the Senate will pass the $2 trillion coronavirus relief package later in the day after meeting with Democrats several times in the last few days to iron out the details.

‘The Washington drama does not matter anymore. The Senate is going to stand together, act together and pass this historic relief package today,’ the Senate Majority Leader asserted Wednesday afternoon.

Senate Minority Leader Chuck Schumer said that ‘once the language is ready, Democrats are ready to speed up the consideration of the bill as much as possible.’

‘I expect that the Senate can get the job done in the next few hours,’ he said from the Senate floor.

Lawmakers are hoping that third times the charm after Democrats blocked the GOP-backed bill from passing in the Senate Sunday and again on Monday when they brought what they said was a ‘partisan’ version to the floor.