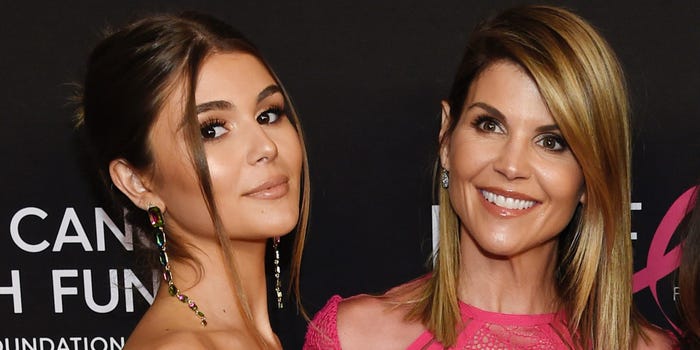 Beauty influencer Olivia Jade Giannulli has spoken out about the college admissions scandal for the first time since her parents were charged in March 2019 — and she says she finally recognizes the privilege that went into the scheme.

Lori Loughlin and Mossimo Giannulli are currently serving prison sentences after pleading guilty to paying $500,000 to have their daughters Isabella and Olivia Jade admitted into the University of Southern California as purported crew recruits. Olivia Jade sat down on the latest episode of "Red Table Talk" on Facebook Watch to discuss the scandal.

"What a lot of people don't know is that my parents came from a place of just 'I love my kids…' I think they thought it was normal," the 21-year-old told co-hosts Jada Pinkett Smith, Willow Smith, and Adrienne Banfield Norris. "There was a college counselor who seemed legitimate but didn't end up being legitimate. And in that community, it was not out of the ordinary. It's embarrassing to say I didn't know [it was not normal]."

Olivia Jade was on spring break from USC when Loughlin and Giannulli were indicted alongside dozens of other parents, school officials, coaches, and the scheme's ringleader, William "Rick" Singer, who prosecutors say facilitated students' admissions to elite universities through bribes, falsified SAT and ACT exams, and fake athletic profiles.

Prosecutors say Loughlin and Giannulli worked with Singer to create fake athletic profiles for both Olivia Jade and their older daughter, Isabella, that included photos of them on rowing machines and resumes featuring fake rowing accomplishments.

Olivia Jade called her family's involvement in the scheme a "mistake."

"I put a lot of trust in a person who claimed his profession was college counseling and then he led me in a wrong direction. It's not to shift blame. It's just to say I didn't know what was going on," she said. "I did work hard, and when this did come out, I was a little confused when I saw stuff about what I had written on my application. I remember I had written about my YouTube."

She told "Red Table Talk" that she was embarrassed and ashamed about her parents being charged, but at the time she was also confused as to what exactly her parents did wrong.

"I wasn't angry, and it's because I didn't have a complete understanding of what just happened. I didn't see the wrong in it. One-hundred-percent honesty, when it first happened, I didn't look at it and say, 'Oh my god, how did we do this?' I said, 'Why is everybody complaining? I'm confused at what we did?'" Olivia Jade said. "That's embarrassing in itself that I walked around my whole 20 years of life not realizing that like, 'You have insane privilege. You're like the poster child of privilege, and you have no idea.'"

In the weeks after Olivia Jade's parents were charged in the college admissions scandal, videos of Olivia Jade saying she hated school resurfaced, and several companies, including Sephora and Amazon, dropped their partnerships with her.

She and her sister took a hiatus from USC and ultimately decided not to return.

But she told the "Red Table Talk" cohosts that she's also taking steps to acknowledge her privilege, and recently started working with an after school program in the Watts neighborhood of southern Los Angeles

"I don't want to throw money at a problem. I want to invest myself so I can start to understand. I'm starting, but I'm still learning and it's taken me a minute to do, but I also think I needed to have that understanding and have that mind switch to start doing stuff," she said.

At the time of publication, Loughlin is a little more than halfway through her two-month college admissions scandal prison sentence, and Giannulli is just a few weeks into his five-month sentence.

It's unclear if Olivia Jade has been able to speak with them, but at the time "Red Table Talk" was recorded she said COVID-19 guidelines barred her from visiting.

She's currently living with her sister, and told the "Red Table Talk" cohosts that she wants a second chance.

"I'm not trying to victimize myself. I don't want pity. I don't deserve pity. We messed up. I just want a second chance to be like, 'I recognize I messed up,'" she said. "And for so long I wasn't able to talk about this because of the legalities behind this. I wasn't able to say 'I'm really sorry that this happened,' or 'I really own that this was a big mess up on everybody's part.' But I think everybody feels that way in my family right now."

Cast of 'Beverly Hills, 90210' Reunites for New Series: Where are Shannen Doherty and Luke Perry?