Testing has become a core focus as the U.S. tries to contain the spread of the Omicron variant, which now accounts for an estimated 58.6% of all COVID-19 cases in the country.

President Biden announced on Dec. 21 that his administration would be providing 500 million at-home tests for free across the U.S. And according to Dr. Arthur Caplan, a bioethicist and professor at NYU Langone's Health Division of Medical Ethics, the initiative is still not enough.

“Right now, I still think we’re not in a great place,” Caplan said on Yahoo Finance Live (video above). “We don’t have enough testing. The federal government has promised 500 million tests coming in six weeks or so. 500 million tests is, sadly, not sufficient. These tests require two tests, 24 hours apart, to confirm what you find. That means 250 million people can get tested, if you will, once. We need a lot more testing capability than that.”

President Biden has acknowledged the country's testing shortfall and admitted in an interview with ABC News that he wished he had thought about ordering the 500 million tests two months ago.

The number of COVID cases in the U.S. has skyrocketed by 153% over the past 14 days, with the country averaging a new pandemic high of more than 300,000 new cases a day.

“It’s morally scandalous that we don’t have the testing capability to tell people to stay home when they’re sick, when they’re positive,” Caplan said.

'In an unvaccinated population … it's just inevitable'

The recent images of long lines of people waiting for COVID tests echo the beginning of the pandemic in early 2020 when tests were hard to come by for Americans.

“The new strain, this Omicron strain, is as contagious as measles,” Caplan said. “And that might not mean much … but measles is almost impossible to contain. It’s so contagious. It’s crazy. And Omicron looks to be contagious at that level. In an unvaccinated population, 15-20 million people in some parts of the United States, you know they’re gonna get it. It’s just inevitable.” 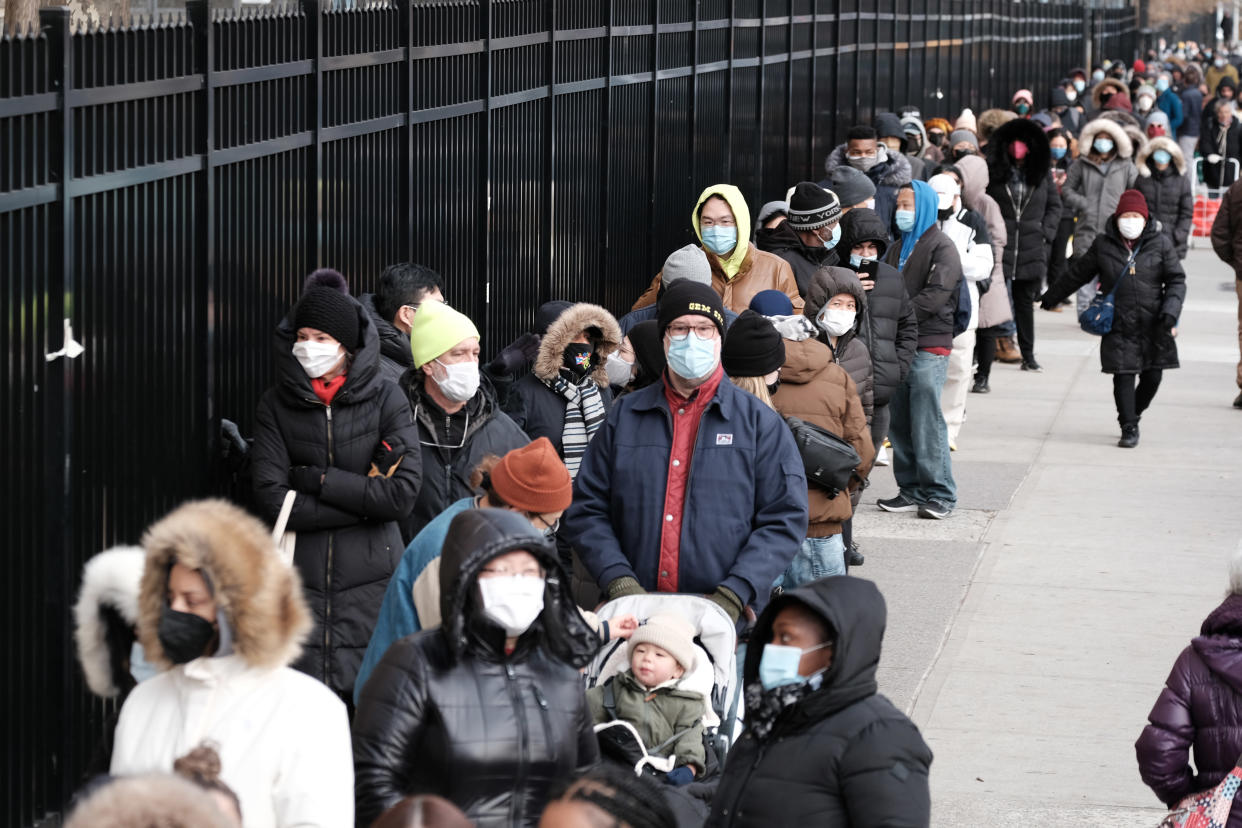 Data has indicated that vaccines make a difference in the severity of illness from the Omicron variant. According to Dr. Anthony Fauci, getting a booster on top of initial COVID vaccinations produces sufficient antibodies to thwart the serious effects of Omicron.

“If you haven’t been vaccinated — and I mean three shots with the booster — I think you’re very likely to get it,” Caplan said. “That’s the bad news. It doesn’t seem as harsh as other strains. That’s a little better. But even there, vulnerable people — people with immune diseases, older people, cancer patients — they’re really going to be in trouble if they catch this thing.”

He added that the U.S. should continue pushing for vaccines but conceded that "part of the way we’re going to work our way out of Omicron with its high contagiousness is more testing, and we’re not there yet. We’re just not pushing it hard enough.”

And for those who are able to access PCR tests, which are considered to be more accurate than rapid antigen tests but require laboratory work, the wait times are extending by days amid the surge.

“You cannot wait 5-7 days, especially in a city like New York,” he said. “Rapid antigen tests are finding out there’s a correlation with contagiousness which gives you your status at that moment, so it’s actually a more useful test, considering the circumstances, to test right before that gathering that you want to do with your family this holiday season.”

Adriana Belmonte is a reporter and editor covering politics and health care policy for Yahoo Finance. You can follow her on Twitter @adrianambells and reach her at [email protected]

Our Absolute Favorite Slippers on Zappos Right Now — All on Sale!