Milwaukee: The Democratic Party's experiment with an entirely virtual political convention kicked into high gear on its third night with a series of vigorous speeches, an impressive debut from vice presidential nominee Kamala Harris and an important shift towards policy specifics.

Barack Obama and Hillary Clinton dramatically raised the stakes of the election, telling their followers that democracy itself is at stake on November 3 because Donald Trump will try to cheat his way to victory unless they get out to vote in overwhelming numbers. 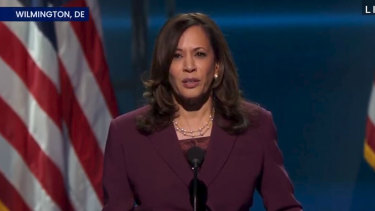 Kamala Harris demonstrated why Biden picked the California senator to be his running mate.Credit:CSpan

Both recognised the importance of imbuing the election campaign with a sense of urgency. The COVID-19 pandemic and resulting economic recession have stripped the election of its usual status as the dominant issue in the national conversation. Americans don't know whether they can safely send their kids to school or if another much-needed stimulus cheque is coming in the mail.

And Joe Biden is up against an opponent who claims the radical left is about to take over America, destroy the suburbs and allow open borders.

In keeping with tradition, Obama has refrained from criticising his successor directly for most of his first term. Those days are over: his speech was stunningly hard-hitting for a man often described as professorial.

"Donald Trump hasn’t grown into the job because he can’t," Obama said, accusing him of treating the presidency as "one more reality show that he can use to get the attention he craves".

Obama's masterful speech offered a reminder of why he is regarded as one of the most talented orators in American history.

Importantly, though, the night wasn't just about Trump bashing. The Democrats finally got around to explaining their policy vision for America and making an affirmative case for Joe Biden that didn't simply rely on him being an empathetic contrast to Trump.

Obama was generous in his praise for his former VP, crediting him with helping to get the Ebola epidemic under control, leading the US out of the global financial crisis and passing healthcare reform.

Several speeches hit notes of economic populism, balancing out the previous focus on gender and racial diversity. Elizabeth Warren, for example, said that Biden's policies reflect that America's "economic system has been rigged to give bail-outs to billionaires and kick dirt in the face of everyone else".

Accompanying videos highlighted the Democrats' policies on climate change, gun safety and immigration. Another video focussed on how the pandemic has crushed the livelihoods of small business owners. It was good TV and good politics.

The night ended with a speech from Harris that demonstrated why Biden picked the California senator to be his running mate. She told a compelling personal story as the daughter of Jamaican and Indian parents who rose to the top of politics. She took on Trump with prosecutorial zeal, declaring: "I know a predator when I see one".

The downsides? If anything, there were too many big-name speeches crammed into one night. The Democrats' newly-unveiled election slogan – "Build back better" – is workmanlike rather than memorable. And, as Obama suggested in his speech, it's unclear how many truly undecided voters remain who can be persuaded by such a broadcast.

But all up, the event went as well as Democrats could have hoped for. It's now up to Biden to stick the landing on the convention's final night.