On the 80th anniversary of Kristallnacht, the far-right march in Berlin: Protesters gather in Berlin as country marks pogrom against Jews

A Berlin court has overturned a ban on a far-right rally planned for this evening – the 80th anniversary of the infamous anti-Semitic pogrom known as Kristallnacht.

The far-right ‘Wir für Deutschland’ (We are for Germany) movement, will march through the German capital on Friday night.

Although Berlin’s interior minister, Andreas Geisel, called off the march on Wednesday, The Administrative Court in Germany’s capital overturned his decision. 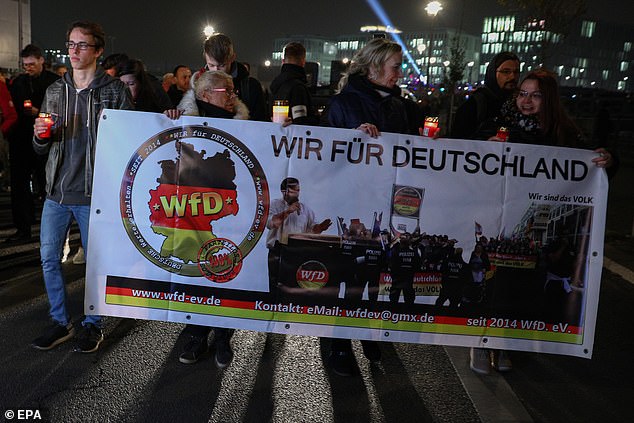 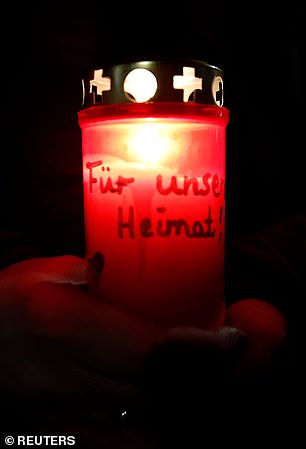 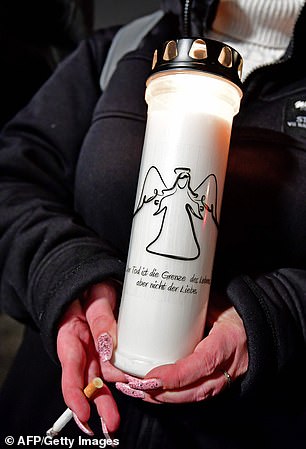 WfD have called the event a ‘funeral march’ and invited protesters to bring along candles to ‘commemorate the victims of politics and their actions’. It is to start near to the Reichstag – Berlin’s parliament building 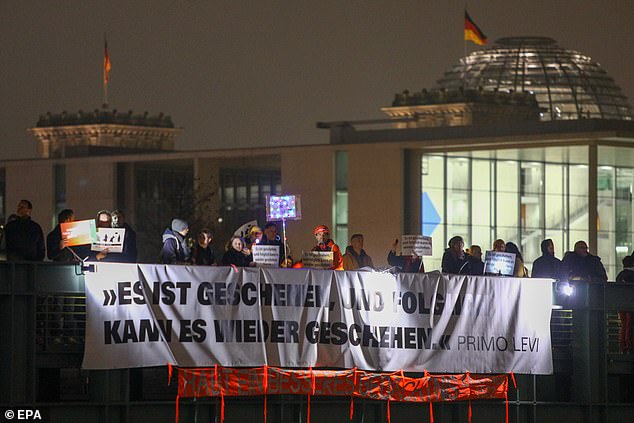 Counter protesters hold a banner reading: ‘It happened, therefore it can happen again’ during a demonstration against the far-right march in Berlin 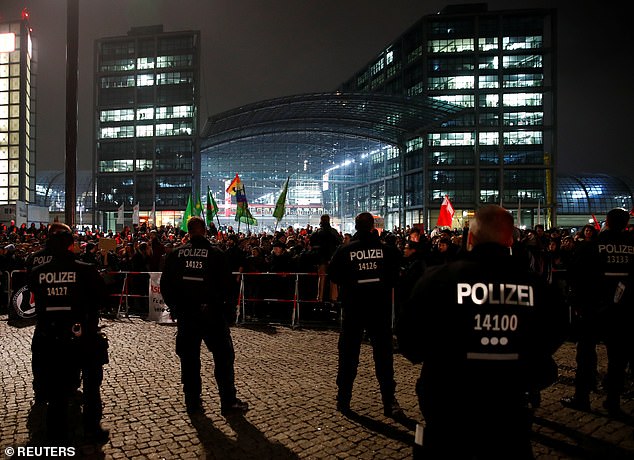 Police secures the area as people take part in a counter-protest against a right-wing activists’ demonstration, in front of the Berlin’s main railway station 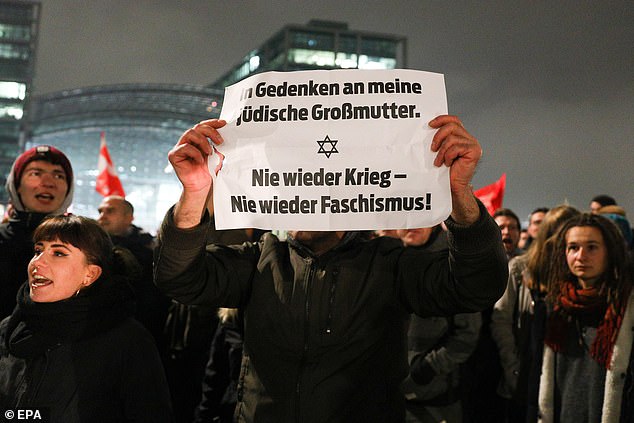 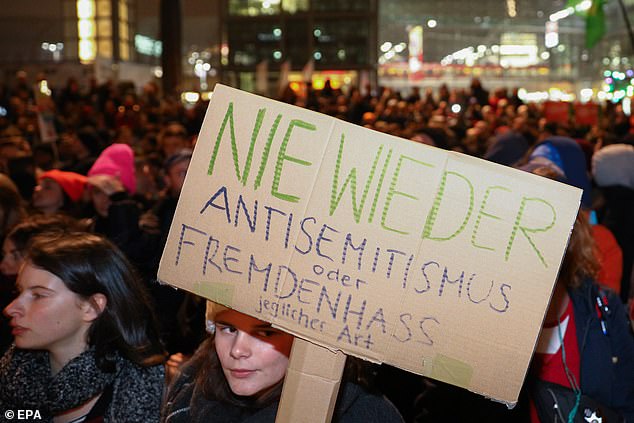 Geisel, a member of the Social Democratic Party (SPD), took issue with timing such a rally to coincide with the anniversary of Kristallnacht.

He said it would ‘blatantly negate the moral and ethical significance of this memorial day’,German news agency dpa reported.

‘The idea that on the 80th anniversary of Kristallnacht right-wing extremists could march through the government district – perhaps in the dark with burning candle – I find it unbearable,’ Deutsche Welle quoted Geisel as saying.

WfD called the event a ‘funeral march’ and invited protesters to bring along candles to ‘commemorate the victims of politics and their actions’. It is due to start near to the Reichstag – Berlin’s parliament building. 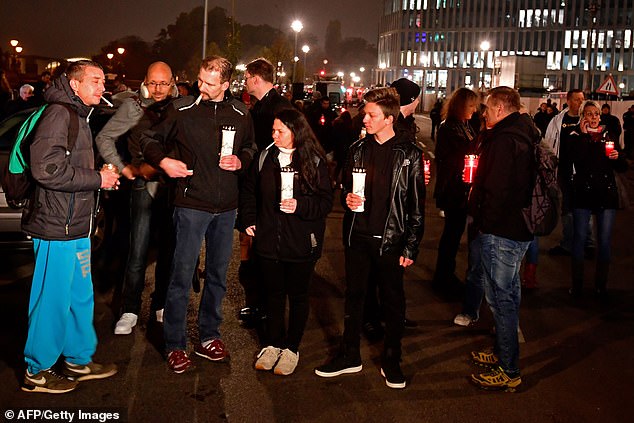 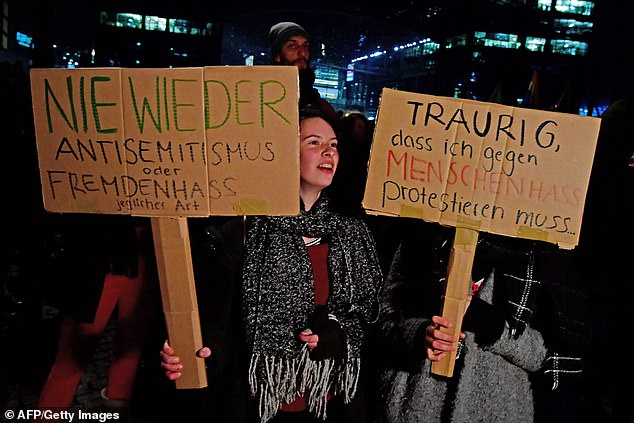 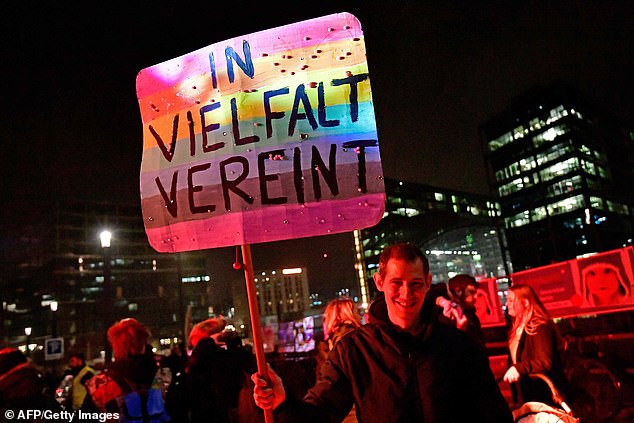 A counter-demonstrator holds up a placard which reads ‘Unified in diversity’ on November 9, 2018, the day which commemorates the 80th anniversary of the Kristallnacht Nazi pogrom

Speaking following the decision, a court spokesperson said it was illegal to prevent the march because it did not pose a threat to public order – a condition of such bans.

Geisel said he would appeal the court’s decision.

KRISTALLNACHT: THE NIGHT OF BROKEN GLASS

On November 9. 1938, the Nazis began their campaign to destroy the Jewish race.

The authorities watched on as Hitler’s SA paramilitary force and non-Jewish civilians targeted Jewish businesses and homes. 91 Jews were killed in the attacks in Germany and Austria and more than 30,000 were arrested and incarcerated in concentration camps. 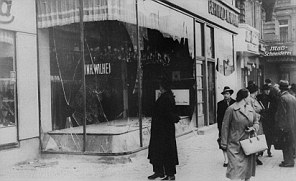 Jewish homes, hospitals and schools were ransacked and more than 1,000 synagogues were burned down, while thousands of Jewish businesses were destroyed.

Historians have long pointed to the two-day campaign of terror as the start of Hitler’s Final Solution – the dictator’s comprehensive plan to exterminate the entire Jewish population in Nazi occupied Europe.

The name of the wave of violence refers to the shards of glass left strewn across cities in the aftermath of the bloody pogroms.

While it is going ahead this evening, the marchers are being met by anti-fascist groups who have mobilised to counter what they call a ‘right-extremist provocation.’

The Local reported that more than a thousand people are expected to join the counter-protest.

The WfD is a nationalist and anti-EU group, purporting to stand for German culture and identity.

A spokesperson told The Local that the march was in remembrance of people who died trying to cross the Berlin Wall – which also fell on this day, November 9 1989.

November 9 is referred to in Germany as ‘Schicksalstag’ or ‘Day of Fate’ because of the magnitude of events that took place on this day in history. As well as Kristallnacht and the fall of the Berlin Wall, it marks the the abdication of the Kaiser in 1918 and the Beer Hall Putsch in 1923.

However for most people it is a time to remember the night Nazis launched a wave of attacks on Jewish homes and businesses.

On November 9, 1938, Jews were murdered, synagogues were set alight, the windows of 7,500 Jewish-owned shops were smashed and the insides ransacked, and up to 30,000 Jews were forcibly detained.

Although the Kristallnacht official death toll is 91, it is thought that around 1,300 people were killed or took their own lives in the aftermath.

The night marked an explosion of the anti-Semitism that had been building in Germany since Adolf Hitler became Chancellor in 1933. It was a grim indicator of the future mass murder of Jews by Nazis in death camps across Europe.

Ceremonies are being held across Germany and the rest of the world tonight to remember the victims of Kristallnacht and the Holocaust.

The real reason RHOSLC’s Meredith Marks and her husband split

Disney launches range of wedding dresses based on your favourite princesses

How Prince Harry Really Feels About Traveling Without Meghan Markle