Washington: The ranks of America's unemployed swelled toward Great Depression-era levels on Thursday in an unprecedented collapse that intensified the push-pull between White House and states over how and when to begin lifting the coronovirus restrictions that have strangled the economy. 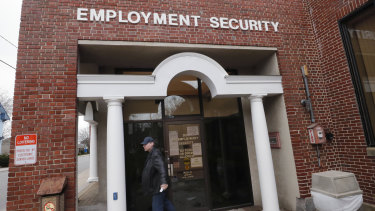 A man walks away from a locked door at the New Hampshire Employee Security centre, which handles unemployment claims, in Manchester, NH,Credit:AP

The government said 5.2 million more Americans applied for unemployment benefits last week, bringing the four-week total to about 22 million out of a work force of 159 million – easily the worst stretch of US job losses on record.

The losses translate to about 1 in 7 workers.

US President Donald Trump planned to announce late in the day a roadmap for easing the nation's social-distancing recommendations so that states can reopen for business.

While many Americans have chafed at the lockdowns and the damage to their livelihoods, others, including business leaders and governors, have warned that more testing and protective gear are needed first. 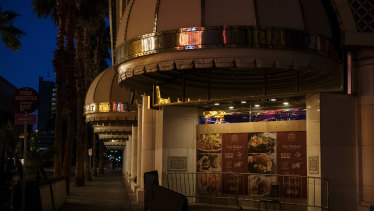 "My No. 1 focus is to keep my family safe, so I'm really not in a hurry to put an end to this," said Denise Stockwell, who is about to lose her job in marketing at Cornell University in Ithaca, New York.

"I wouldn't want a misstep, which is why I get so enraged by what President Trump is saying."

But conservative economist Steven Moore, a Trump ally, said there will be 30 million people out of work in the country if the economy doesn't open back up soon.

"And that is a catastrophic outcome for our country. Period," Moore said. "You're going to have social chaos."

Worldwide, the outbreak has infected more than 2.1 million people and killed over 140,000, according to a tally by Johns Hopkins University, though the true numbers are believed to be much higher.

The spread of the virus is declining in such places as Italy, Spain, France but is rising or continuing at a high level in Britain, Russia and Turkey, authorities said.

In New York, the most lethal hot spot in the US, reported more encouraging signs. The number of people in the hospital with the virus dropped to around 18,000 statewide – well short of the apocalyptic projections – and new deaths were put at about 600, down from the high 700s last week.

"We've controlled the beast. We've brought the rate of spread down," Governor Andrew Cuomo said. Still, Cuomo extended the state's lockdown through at least May 15, and New York City is lining up 11,000 empty hotel rooms to quarantine people living in crowded apartment buildings.

Police acting on an anonymous tip found at least 18 bodies over two days at a nursing home in Andover Township, New Jersey. All told, 68 deaths, including residents and nurses, have been linked to the home. Corpses were found packed into a room used to hold the dead until they can be picked by a funeral home. 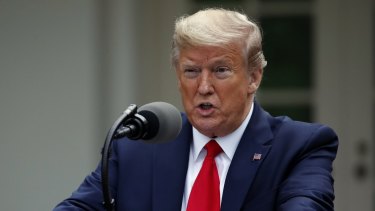 Donald Trump wants the economy reopened after tens of thousands have died.Credit:AP

"Those people that know they're vulnerable, self-quarantine. And everybody else, let them go back to work," said Aaron Carver, a laid-off housing contractor who joined a protest outside the governor's mansion in Richmond, Virginia, to decry what he said was the government's trampling on people's rights.

But health authorities and many politicians have warned that lifting restrictions too soon could allow the virus to come storming back.

The decisions rest not with the White House but with state and local leaders, who imposed the mandatory lockdowns and other measures over the past month. Seven Midwestern governors announced Thursday that they will coordinate on reopening their economies, after similar pacts were reached earlier this week among states in the Northeast and on the West Coast.

Mayor Bill de Blasio of New York City, with more than one-third of the nation's coronavirus deaths, was among those urging caution.

"Everyone wants our economy to restart," he said. But "if we can't provide the basics for our people, then you can kiss your recovery goodbye."

In the US, economists said the unemployment rate could reach 20 per cent in April, the highest since the Depression of the 1930s. Layoffs are spreading well beyond stores, restaurants and hotels to white-collar professionals such as software programmers and legal assistants.

Jacques Primo, 40, was laid off from his bartending job at a Savannah, Georgia, seafood restaurant.

"It's just shut down everything, turned off the whole city," Primo said as he waited in line at a food pantry. "Before, I've never been worried, because I'll go find another job. Now you can't. It's impossible."

By all accounts, the lifting of restrictions, when it happens, won't be like flipping a switch. Restaurants and other businesses may be reopened in phases, with perhaps a limited number of entrances or reduced seating areas, while grocery stores may stick with one-way aisles and protective shields at the cash registers, experts say.

Even then, it could take awhile before business comes back, if China and certain places in Europe are any indication.

Jeremiah Juncker, manager of the Rappourt pub in Ann Arbor, Michigan, wonders whether anyone would come if he were even allowed to re-open.

"It might be 'back to normal' for everyone else, but people still don't feel comfortable gathering at restaurants and bars," he said.

The economic damage, meanwhile, escalated around the world.

Many European countries, like the US, have seen heavy job losses, but the social safety nets there tend to be stronger. Places like Germany and France are using government subsidies to keep millions of people on payrolls instead of letting them go on unemployment.

Political leaders on the Continent are trying to find a balance between the country's health and its wealth.

Italy's hard-hit Lombardy region is pushing to restart manufacturing on May 4, the day the national lockdown is set to end, with perhaps staggered opening hours to avoid crowding on public transportation. But Italy's deputy economic development minister, Stefan Buffagni, warned that approach could lead to confusion.

Britain, with over 13,700 dead, extended its nationwide lockdown on schools, pubs, restaurants and most stores for at least three more weeks in a move that appeared to have wide public support. Foreign Secretary Dominic Raab said, "Any change to our social distancing measures now would risk a significant increase in the spread of the virus."

Swiss authorities announced a staggered series of reopenings, starting in late April with medical and dental offices, hair salons and other select businesses, followed in May and June by other stores, schools, zoos, libraries and museums.

"Ladies and gentlemen, the transition is beginning," Home and Health Minister Alain Berset said. "We want to go as fast as possible, and as slow as necessary."

Other indicators suggested the worst has yet to come in some parts of the world.

Japan's prime minister announced he would expand a state of emergency to the entire country, rather than just urban areas, as the virus continued to spread. Japan has the world's oldest population, and the elderly are especially vulnerable to the coronavirus.

UN Secretary-General Antonio Guterres urged stepped-up preparations in Africa, warning that the continent "could end up suffering the greatest impacts."

Monty Don pays emotional tribute to dog Nigel in heartfelt interview: ‘This is for him’

We saved £20k in a year so we could buy a house, here are our easy tips so YOU can too

World Cup 2018: How to watch England vs Sweden online