P&O chaos leaves Dover GRIDLOCKED: Passengers are forced to wait hours at the border and the town is gridlocked as bad weather exacerbates delays while P&O boats STILL can’t sail after all crew were sacked

Poor weather and a shortage of cross-channel ferry services are being blamed for huge queues at the border and gridlocked roads around Kent today.

Three-hour waits are being reported after the Port of Dover’s capacity was reduced, owing to fewer services being offered by DFDS, Irish Ferries and P&O Ferries in the wake of the redundancy debacle.

Drivers have been stuck in hours of queues before being able to board their boats, while other lorries were forced to wait in up to eight miles of queues overnight.

It comes as day two of Operation Brock caused fresh headaches for both holidaymakers and hauliers as the M20 in Kent was closed to hold lorries heading towards the coast.

Kent Police implemented the traffic management plan to stack HGVs heading to the continent after eight-mile long tailbacks were reported on the motorway overnight.

Some lorries were made to wait for up to eight hours, while sources described the situation as ‘a mess’ to ITV.

Last month, P&O Ferries admitted to breaking the law in the manner in which it terminated 800 members of staff to hire cheaper agency workers, a move that has caused a major backlash from politicians and workers. 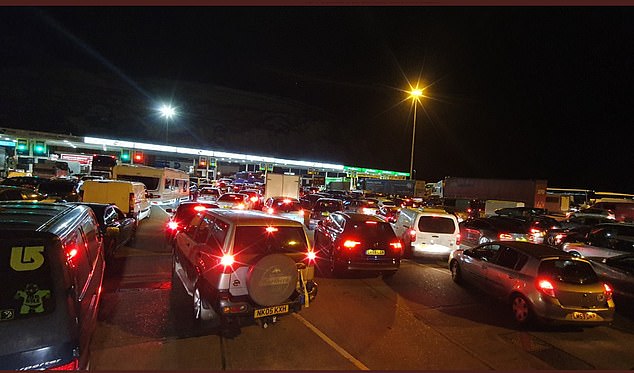 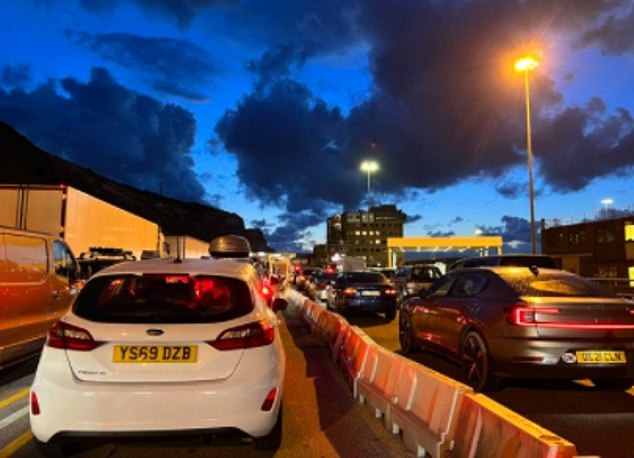 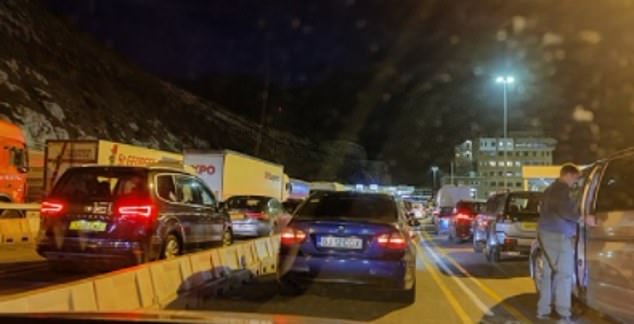 The M20 eastbound between J8 and J9 remains shut to non-freight traffic on Saturday. Pictured: The traffic chaos for holidaymakers continued overnight 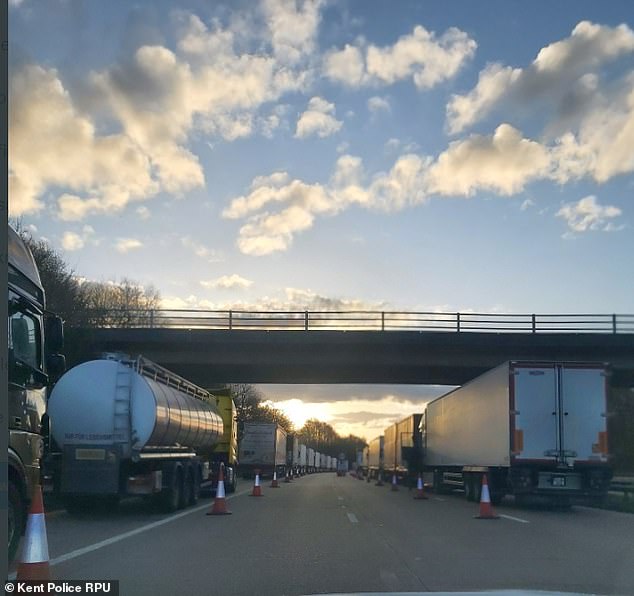 Day two of Operation Brock caused fresh headaches for both holidaymakers and hauliers as the M20 in Kent was closed to hold lorries heading towards the coast. Pictured: Lorries queuing on the M20 on Saturday morning

Three-hour waits are being reported after the Port of Dover’s capacity was reduced, owing to fewer services being offered by DFDS, Irish Ferries and P&O Ferries in the wake of the redundancy debacle 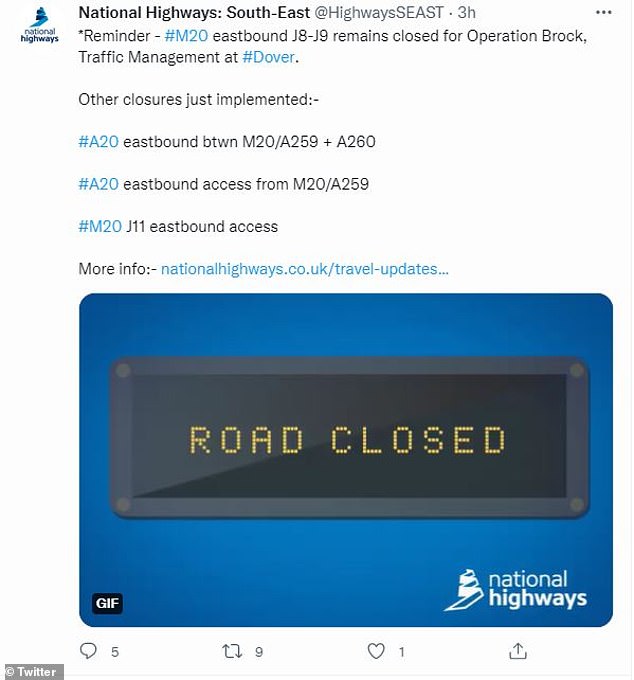 The M20 eastbound remains shut to non-freight traffic this morning, causing gridlocked roads for surrounding villages, and creating havoc for families hoping to get away for the Easter break

A shortage of ferries was exacerbated after a DFDS ferry struck a berth in Dunkirk amid strong winds last night, leading to that service being removed for repairs.

The M20 eastbound between J8 and J9 remains shut to non-freight traffic, causing gridlocked roads for surrounding villages, and creating havoc for families hoping to get away for the Easter break.

Meanwhile, the A20, one of the main access roads for the Port of Dover, remains closed east-bound owing to the huge queues of lorries attempting to cross the Channel.

The traffic chaos, which saw some cars stuck for up to three hours, prompted motorists to seek alternative routes towards the ferry terminal causing further delays in towns across Kent which have spilled over into Saturday.

Motorists heading to the coast were warned they can expect delays well in excess of an hour, while it was reported that some hauliers waited for up to eight hours.

Many schools across the country have broken up for the Easter holidays this afternoon, prompting the mass exodus. However, other children will be expected in their classrooms early next week.

Closures were first implemented last night as part of Operation Brock to allow lorries heading for the channel crossing to be ‘stacked’ on the motorway, in theory allowing them smoother access to the Kent coast.

A Department for Transport spokesman said: ‘We are aware of queues at Dover, and the Kent Resilience Forum and local partners are working to minimise any disruption by deploying temporary traffic-management measures as standard.’

Last night, the A20 Roundhill Tunnel was closed coastbound between the junction 13 of the M20 and the A260 near Folkstone.

This is part of Operation Tap which controls traffic approaching Dover Port. 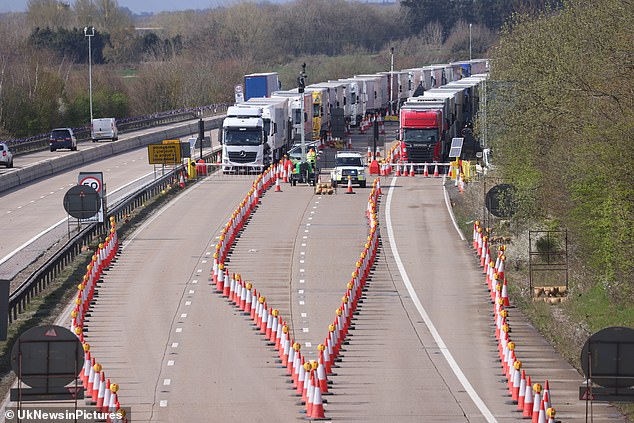 The M20 in Kent, pictured, saw lorries stuck in Operation Brock for more than six hours. Meanwhile, motorists heading to Dover are also facing significant delays of more than an hour with five-mile tailbacks resulting from the chaos 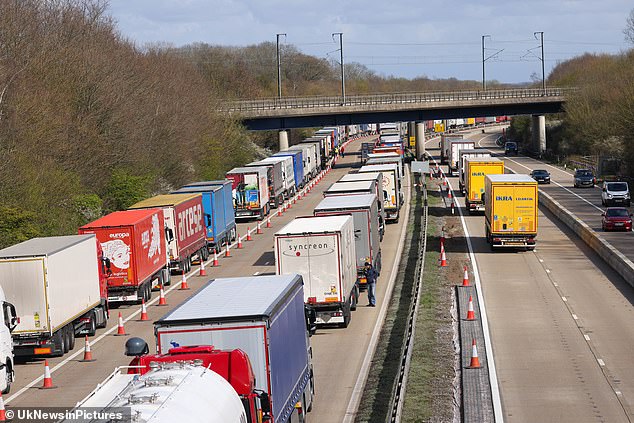 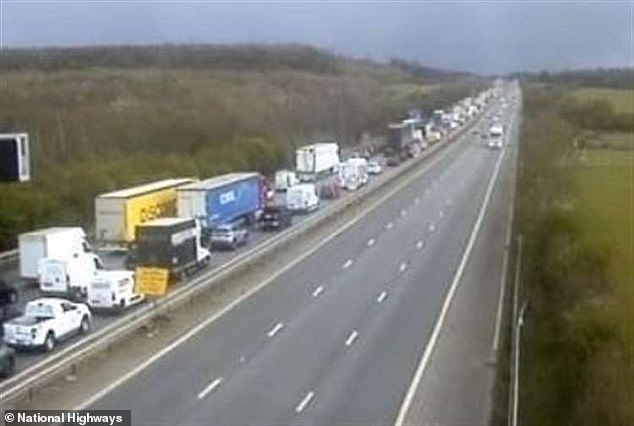 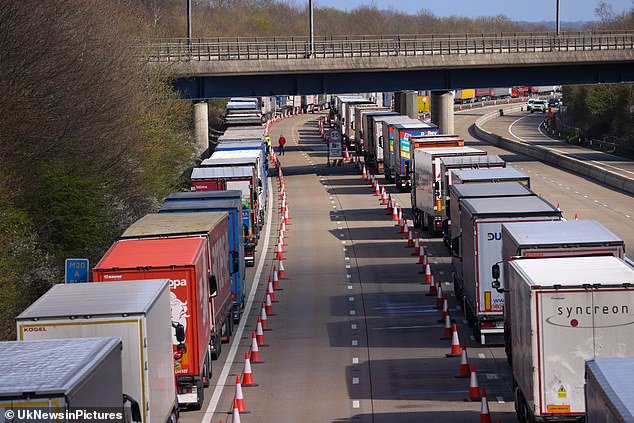 Kent Police were forced to implement Operation Brock, closing the M20 to park lorries to limit the numbers allowed to approach Dover

National Highways last night stated: ‘There are currently 5.5 miles of congestion on approach to J8 causing delays of 60 mins above normal travel time.

‘If this closure impacts on your planned route, please allow extra journey time. Plan ahead, you may wish to re-route or even delay your journey.’

The Port of Dover warned passengers about long delays approaching the ferry terminal. 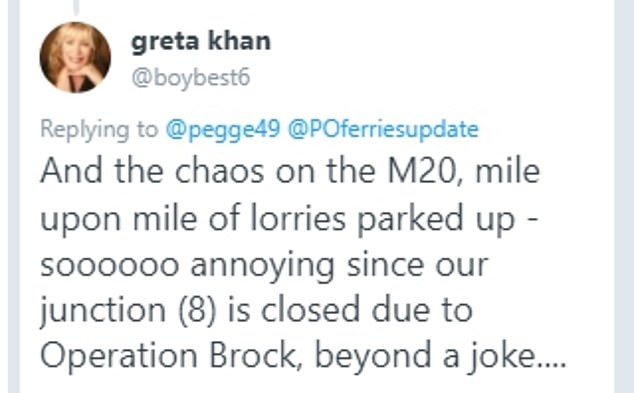 According to a spokesperson: ‘The main approach roads to the Port are currently very busy.

‘We are working with operators to get people on their way as swiftly as possible, but are asking passengers to please allow extra time for their journey.

‘Local traffic is advised to use alternative routes where possible.’

The ongoing dispute involving P&O Ferries has dramatically reduced the capacity of the port.

DFDS has also announced it will run a reduced service between Dover and Calais due to poor weather conditions and a ‘technical problem’.