Operation Protect Trump: 10,000 police and SAS will guard the President as he visits Blenheim Palace, meets Theresa May at Chequers and the Queen at Windsor while first lady Melania visits a children’s hospital 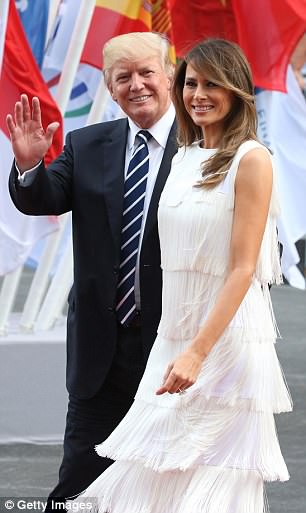 Up to 10,000 police officers will be drafted in to protect Donald Trump from mass protests and the threat of a terror attack when he visits Britain next month.

Hundreds of riot vans full of frontline PCs will take to the streets to stop planned rallies and marches turning violent – particularly when they clash with supporters of the controversial US president.

The Mail on Sunday can reveal that elite armed officers and the counter-terror ‘robocops’ who train alongside the SAS will also be on alert in case of a terrorist atrocity, while a staggering 40 police cars and motorbike outriders have been demanded whenever Mr Trump travels by road, to shield him from assassination attempts.

Chief constables have cancelled rest days and told officers to prepare for being shipped hundreds of miles from home to help out in areas the president is due to visit, under what has been codenamed Operation Manifold.

But there are fears the operation will leave the rest of the country without adequate security in the midst of a violent crimewave, which has seen 77 suspected murders in London alone this year. 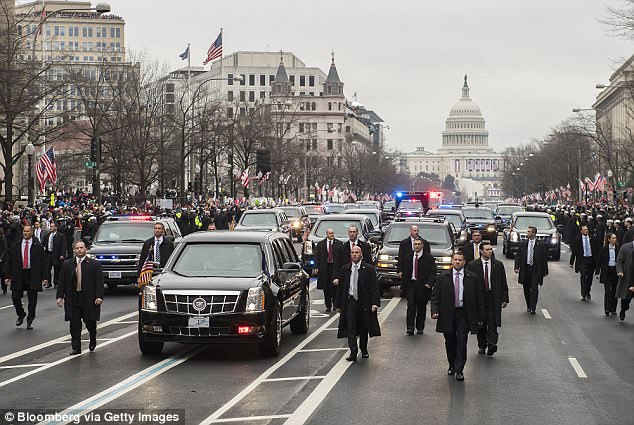 Hundreds of riot vans full of frontline PCs will take to the streets to stop planned rallies and marches turning violent. Pictured: The secret service escort the US president during his presidential inauguration parade

Kevin Hurley, a former public order chief in City of London Police, said: ‘It will be a significant drain on visible policing – it’s going to strip out resources from surrounding forces and it will be the youngest and fittest who are drawn off.

‘Whenever the US president visits there is a huge security requirement just because of the threat from terrorism, but because of his current profile it’s likely to increase opposition and there will be a significant requirement to maintain public order.’

President Trump, who was condemned last week for his policy of detaining immigrant children away from their parents, is not being afforded the full pomp and ceremony of a State visit when he arrives in less than three weeks’ time. 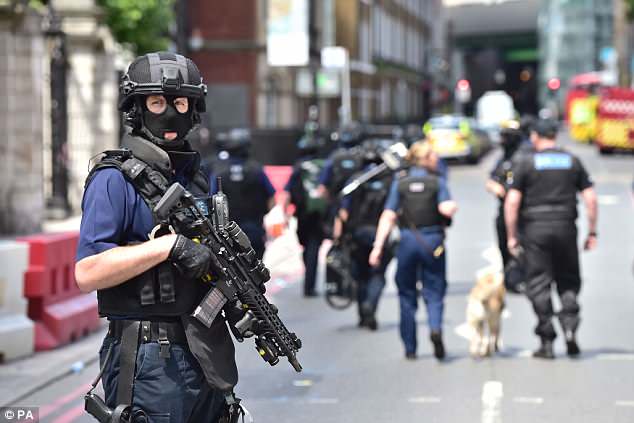 There are fears the operation will leave the rest of the country without adequate security in the midst of a violent crimewave, which has seen 77 suspected murders in London alone this year

Instead, he will be largely kept away from Central London where protests against him will centre, and instead shown the ‘best of British’ in a tour lasting just three days.

The president’s advisers are due to visit the UK shortly to thrash out the specifics, with Mr Trump set to arrive by plane on Thursday, July 12, with Stansted Airport pencilled in for his arrival.

He will then be flown in his Marine One helicopter to the US Ambassador’s grand residence in Regent’s Park before enjoying dinner at Blenheim Palace, Winston Churchill’s birthplace. 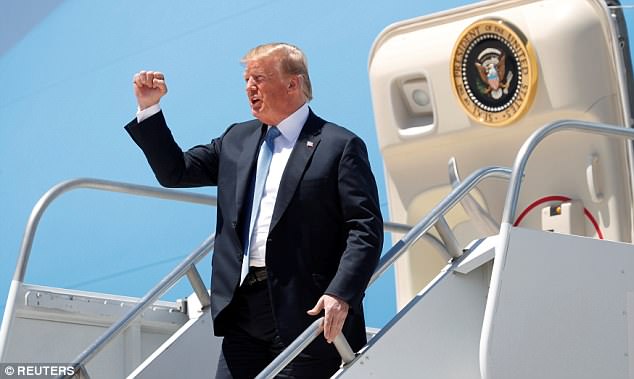 Chief constables have cancelled rest days and told officers to prepare for being shipped hundreds of miles from home to help out in areas the president is due to visit, under what has been codenamed Operation Manifold

The following day he will hold talks with Theresa May at the Prime Minister’s country retreat, Chequers, before meeting the Queen at Windsor Castle, and may also be taken to a military base.

On the final day the President is expected to visit his Turnberry golf course in Scotland before heading home.

Sources say that commanders are currently expecting that as many 200 Police Support Units – comprising an inspector, three sergeants and about 20 public order-trained PCs in three riot vans – will need to be ready for action throughout the trip.

In addition, as seen during last month’s Royal Wedding, hundreds of authorised firearms officers will be on duty.

And behind the scenes will be dozens of Counter-Terrorism Specialist Firearms Officers (CTSFOs), who wear military-style fatigues and are trained alongside special forces to perform hostage rescues or tackle terrorists. 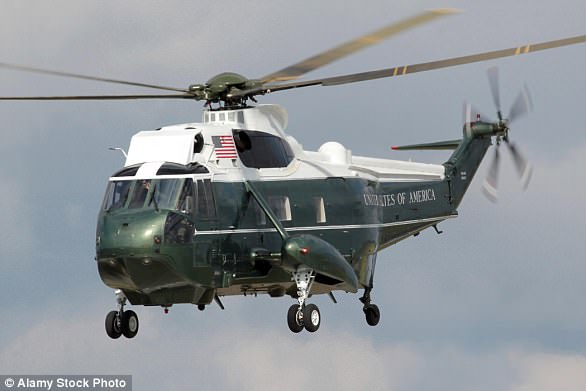 Along with his own ranks of Secret Service agents, he will also have flown over a fleet of bomb-proof Cadillacs – known as The Beasts – in which the Trumps and their entourage will travel. Pictured: One of the helicopters they will travel in

Through a record number of British police will be deployed for the visit, the US president will bring a small army of security personnel with him.

Along with his own ranks of Secret Service agents, he will also have flown over a fleet of bomb-proof Cadillacs – known as The Beasts – in which the Trumps and their entourage will travel.

They will arrive on Air Force One, a modified Boeing 747, and will be accompanied by a military cargo plane carrying The Beasts and two or more helicopters to be operated by US Marines.

Washington insiders say the US Secret Service is also relying on the British police to provide at least 40 cars with armed escorts and teams of motorcycle outriders every time the President and his wife Melania move by road.

This force will go ahead of the Trump car and will drive behind it, blocking all intersections along the route.

And thousands of police officers will be needed to keep order during the huge protests that are expected throughout the visit. 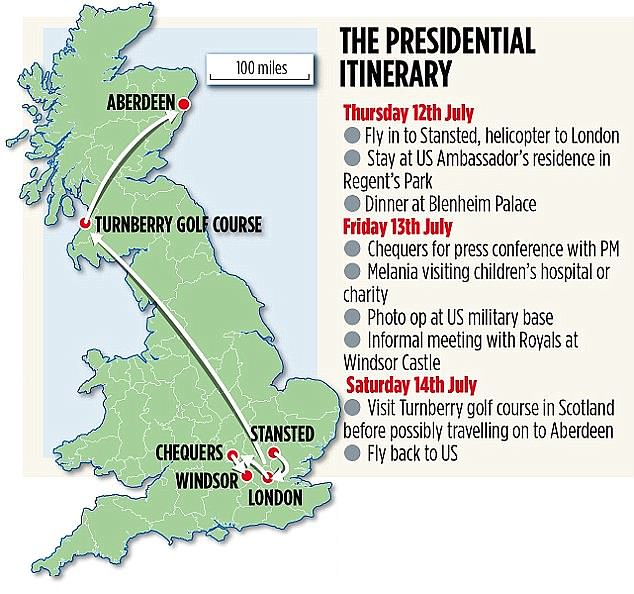 And earlier that day there will be a noisy protest led by Women’s March London gathering outside the BBC headquarters in Oxford Circus and rallying in Trafalgar Square.

Their logo is a skull and crossbones and their rallying cry is ‘bash the rich’.

But Britain’s most notorious anarchist group Class War is boycotting the main anti-Trump protest on health and safety grounds.

Founder Ian Bone posted on its Facebook page that too many people would be crammed into Trafalgar Square with no access to water or toilets.

‘It’s a recipe for disaster,’ he said.

But the key flashpoint is expected to be on the Saturday, when a hardcore band of Trump supporters will meet up with supporters of the jailed English Defence League founder Tommy Robinson, and likely clash with a counter-demonstration outside Downing Street.

Scotland Yard said: ‘We are preparing for a multi-faceted policing and security operation, involving the protection and movement of the president.

‘The requirements of this complex operation need to be balanced with the right of individuals to a freedom of speech.’

Chief constables are still finalising numbers needed to police the protests, and organising rotas for the areas that will lose their usual frontline officers. Unpaid Special Constables are expected to have to fill some gaps. Simon Kempton of the Police Federation, which represents the rank and file, said: ‘Thousands of police officers will be leaving their forces to work in long and arduous conditions, and their colleagues will have to maintain a service to the public.

‘This comes at a human cost to those officers.’

Last night Labour’s shadow police minister Louise Haigh told The Mail on Sunday: ‘Police officers across the country are having their rest days and leave cancelled on a weekly basis to keep people safe.

‘The very last thing they need right now is to be diverted from vital tasks to police the red carpet being rolled out for President Trump.’

‘The Masked Singer’ Finale Reveals Sun as Winner: Here’s the Identity of the Final Three Celebrities