A hush came over the crowd as the boy teed off at the 14th hole, par unknown, in Oakover Road, Preston.

He cracked his putter and the ball flew up a ramp and into a tunnel, travelling into a papier mache cow, rolling to the hole via the bovine’s bum. 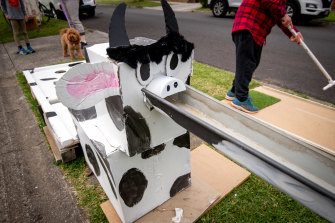 On Friday, the nature strips around Preston and Thornbury were converted into a course with wacky names for the holes including Holey Cow, Wedge Politics, Bogie Nights, I Like Big Putts and Whose Your Caddy.

Children from the area hit the streets and wandered from hole to hole with their putters and scoresheets, made by the parents, following an online map that took them as far north as Bell Street and south to Rennie Street.

Over at hole 18 – Putts on Fire – par also unknown, dad Ian Hillman, 46, said he was sitting in his garage one night “wondering what the hell to do with the kids” on school holidays. 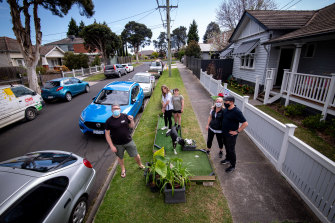 Ian Hillman (left) came up with the idea for the mini golf tournament.Credit:Eddie Jim

“I chucked it [the idea] out to the indoor cricket group [over text message]. I chucked it out to the Bell Primary [School] group and suddenly we had 10 holes,” he said.

The number of holes grew to 20, with a handful more popping up on the day.

“It was something to fill in the time for the kids,” Mr Hillman said.

Lily Schurmann, 11, said home schooling had sometimes been difficult and boring, and the mini golf tournament had created a bit of fun. 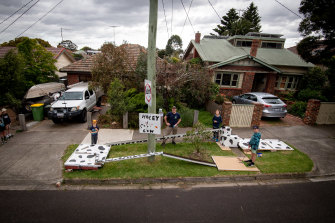 Friends Max, Otis and Hamish were keeping track of their scores – “I got a hole in five,” Hamish said – and there was a promise of gelato once the day was done.

The tournament was a time-filler for some parents too, with epic courses created out of pipes and pallets, while on the day un-childlike shouts of “Come on!” could be heard in the streets. 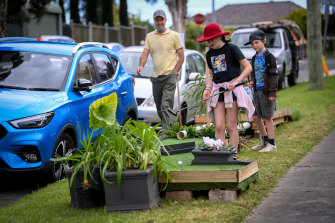 Ruby at the Putts on Fire hole.Credit:Eddie Jim

One of the other dads came up with names for the holes, a QR code was created to link to the online map and another parent donated prizes. Participants were encouraged to donate a dollar to the Royal Children’s Hospital.

“It’s the best idea I’ve ever had and I won’t make a cent out of it,” Mr Hillman, an app developer, said, tongue in cheek.

In need of some good news? The Greater Good newsletter delivers stories to your inbox to brighten your outlook. Sign up here.

'MAFS: Happily Ever After’ Recap: Shawniece Goes Into Labor