A paramedic has been cautioned after repeatedly attending musical theatre rehearsals whilst on duty.

Craig Young told bosses he would be unavailable for two hours during an evening shift as he would be attending an official health care meeting.

But instead the 35-year-old attended a ‘musical theatre group rehearsal’ of Anything Goes in uniform and lied about it, a disciplinary hearing was told.

He was fired last year and has now been given a five year caution order. 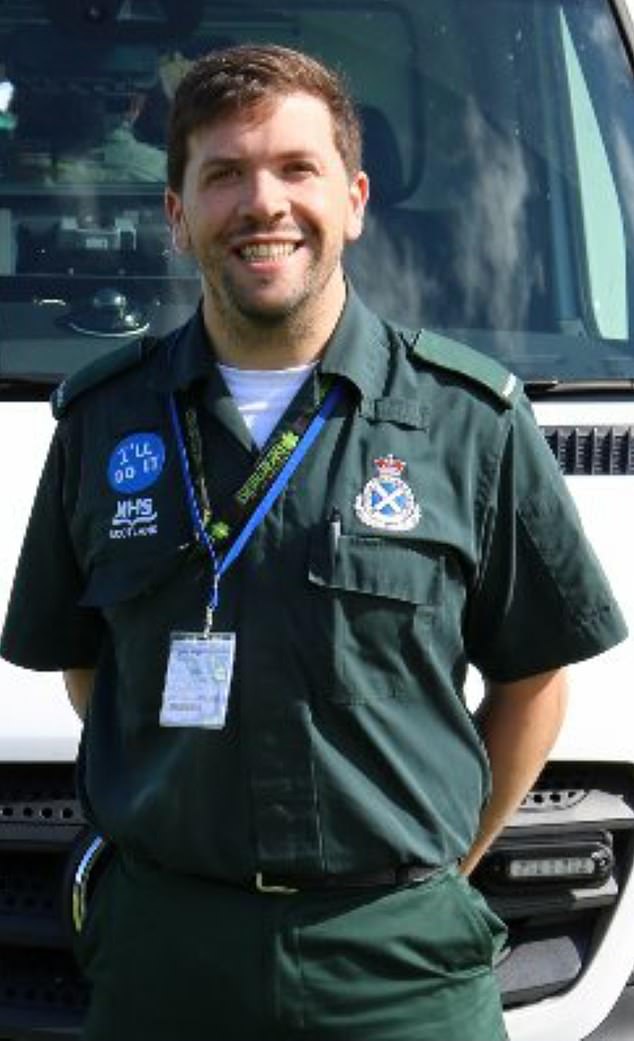 Craig Young, 35, who was a Trainee Advanced Paramedic at the Scottish Ambulance Service, attended a ‘musical theatre group rehearsal’ of in uniform and lied about it

The panel at a Health and Care Professions Tribunal (HCPTS) said his ‘dishonesty’ would shock and appal members of the profession and the public.

The caution order does not stop Mr Young from working in the next five years, but is taken into account if a further allegations are made against him.

HCPTS heard that Mr Young had previously asked his control centre to ask if he could attend rehearsals ‘whilst on duty’ — when he should have asked managers for direct permission.

The panel heard Mr Young was employed as a Trainee Advanced Paramedic by the Scottish Ambulance Service, and had served for around 13 years.

Between September 2018 and January 2020, Mr Young was said to have been rehearsing for his role in the production of Guy Bolton and P. G. Wodehouse musical Anything Goes — due to be staged at Edinburgh’s King’s Theatre.

The panel heard he had previously phoned the Ambulance Control Centre (ACC) on several occasions to ask if he could attend the rehearsals whilst on duty.

The panel was told ACC workers had been ‘happy’ for him to ‘stand by at the rehearsal hall’ so long as he was ‘still available to attend incidents’ and his ‘mobilisation was not delayed’.

However, the panel acknowledged this was not the ‘appropriate route’ of authorisation, and said he should have instead asked his line manager for permission.

Instead, senior managers had ‘no knowledge’ he was attending rehearsals whilst on duty, and were adamant that their permission ‘would not’ have been granted.

The panel noted some locations were acceptable for paramedics to be on standby — such as sitting in ‘McDonald’s’ or ‘the drivers’ lounge at the bus station’.

The panel heard that on one evening in mid-January 2020, Mr Young had attended his rehearsals in his official ambulance service vehicle and uniform but told his control centre he would be attending a Lothian Unscheduled Care Service (LUSC) meeting instead.

He told the ACC he would be unavailable for two hours during the meeting other than for ‘purple’ calls — the most serious of emergency calls involving incidents such as cardiac arrest.

But the panel heard when another colleague requested permission to attend a LUSC meeting the following day, they discovered no such meeting had taken place the evening before.

An investigation was launched and, during an interview the following month, Mr Young said he had ‘thought’ there was a meeting and had ‘panicked’ upon realising there wasn’t.

He said he had parked at a Scout Hall to ‘get his head sorted’ — but later admitted he had known the meeting was the following day and lied about going to rehearsals.

He was later fired by the SAS.

The tribunal branded his lying ‘deplorable’, ‘unprofessional’ and ‘unacceptable’, and ruled he had committed misconduct by ‘prioritising his own interests’ over his duty.

It said: ‘The Panel considered that undertaking this leisure activity whilst on paid duty without making his managers aware of what he was doing would be considered deplorable by fellow practitioners.

‘The Panel considered that [Mr Young]’s actions on 12 January 2020 in misleading individuals, about where he was and what he was doing whilst on duty, and being unavailable to respond to patients that may have needed his services was serious professional misconduct.

‘The Panel had no doubt that giving dishonest accounts to his employer about his actions…was conduct that was both unprofessional and unacceptable.

‘The Panel considered that members of the profession and the public would be shocked and appalled to learn of Mr Young’s actions.’

Peter Bart: Are Brit Auteurs Too Bonded In Franchises To Shock Us Anymore?

These are the skills your child needs before they start school