More than three years ago, I was invited to the Police Academy to watch specialist riot police train with a range of confronting weapons. It was no scoop but a carefully orchestrated public relations move. In commercial terms, it was a “soft opening”, unveiling the gear before it was seen in operation.

As then chief commissioner Graham Ashton said, when the gear was used, it “will be confronting to watch”. 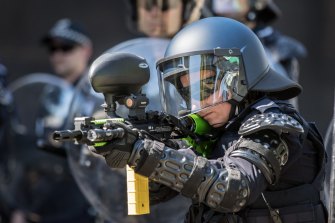 A preview in 2018 of the equipment now being used on the streets.Credit:Jason South

The plan then was to train 300 police to use equipment that included:

Police also now have access to drones to monitor gatherings and a mobile riot truck to record confrontations and identify offenders to be arrested later.

Ashton told me at the time the weapons were for “major incidents of public disorder, demonstrations that go over the top and where we need to disperse large crowds that are out of control. We need the community to be with us on this.

“It is an ugly look to see police in riot gear in a suburban street. We now have some equipment that has not been seen before that may alarm people.”

The gear was ordered after a series of demonstrations and riots in which police were outnumbered and many received serious injuries. At the time, police were concerned at running gang fights around Moomba Festival and repeated clashes between ultra-right and left activists. 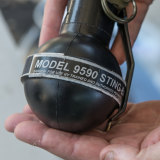 No one could have imagined the equipment would first be used to enforce government health orders. Senior police privately admit they should have used the Public Order Response Team, equipped with the gear, during Saturday’s violent Richmond clashes.

The riot gear was used for the first time in an August anti-lockdown rally and again at Monday’s CFMEU office brawls. The Age revealed that after Saturday’s running battles between uniform police and demonstrators, senior police would consider using PORT more frequently in future.

The force’s 15 pepper ball guns can fire dye pellets onto the body of offenders, so they can be followed and arrested. Superintendent Tim Tully said capsicum dust pellet rounds can be fired at an offender to disable them or be rapid-fired into the ground to set up a stinging dust wall to stop crowds advancing, or to separate warring groups.

“We will be able to ramp up or down our response depending on the circumstances.”

There remains a concern that the more access police have to weapons, the more they will use them. The use of capsicum began with a small hand-held spray and now includes large foam packs. Initially, spray was used about three times a week, and now it is deployed dozens of times a day.

Superintendent Tully said at the time of the unveiling: “There has been an increase in violent crowd behaviour in recent years. We respect the community’s right to gather and demonstrate peacefully, but we need to be equipped and trained to minimise harm.

“The options are like a set of golf clubs. You select the right one for the situation, and we have just added some more clubs.”

Chelsea Handler on Gov. Andrew Cuomo’s Reaction to Her Ghosting Claims: That Ship Has Sailed

Will Shuri Become The New Black Panther? Chadwick Boseman Left Behind A Legacy

Kelly Dodd Responds to Critics After Joking About Being COVID 'Superspreader'