The highly-anticipated caucuses plunged into chaos on Monday night (Tuesday AEDT) thanks to a technical glitch and new procedures that prevented local Democratic officials from releasing any results for almost an entire day. 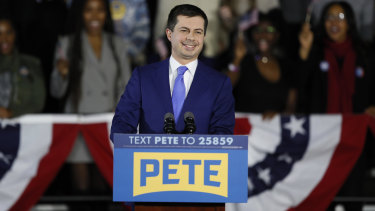 Democratic presidential candidate Pete Buttigieg has a narrow lead in the delegate count in Iowa. Credit:AP

On Tuesday afternoon (Wednesday AEDT) the Iowa Democratic Party released results from 62 per cent of precincts, meaning the final outcome of the caucuses remains a mystery.

The first round of results show Buttigieg claiming 26.9 per cent of state delegates, just ahead of Sanders on 25.1 per cent of delegates and Massachussetts Senator Elizabeth Warren on 18.3 per cent.

Biden, the former vice president, was next on 15.6 per cent of delegates and Minnesota Senator Amy Klobuchar claiming 12.6 per cent. 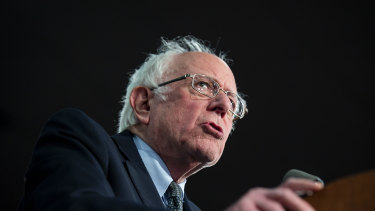 US Senator Bernie Sanders appears to be have come in second in the Iowa caucuses. Credit:Bloomberg

"As chair of the party, I apologise deeply for this."

Although the results were delayed, Price insisted the raw data was secure and Democrats could have faith in the results.

Many prominent Democrats have called for Iowa to be stripped of its cherished "first-in-the-nation" voting status and to abandon its arcane caucus system in favour of primary voting.

"This is a conversation that happens every four years, there’s no doubt that conversation will happen again," Price said.

Trump ridiculed the Democrats for their caucus fiasco, describing the delay as “an unmitigated disaster”.

Buttigieg still faces an uphill fight to secure the party's nomination. Polls show him struggling to attract support among African American and Hispanic voters, crucial components of the Democratic coalition.

'The Forty-Year-Old Version': An Auteurist-Comedy Star Is Born

Celebrity Couples Who Stayed Together After Cheating Scandals