The mysterious disappearance of a phallic-shaped sculpture from a German mountainside, where it first appeared without explanation several years ago, has caught the attention of local police.

Local media reported that police in the Bavarian town of Kempten, about 79 miles southwest of Munich, are investigating the disappearance, although it wasn't clear whether a crime had been committed.

"We don't know whether it is a criminal offense or not," police spokesman Holger Stabik told local newspaper Allgaeuer Zeitung on Monday. 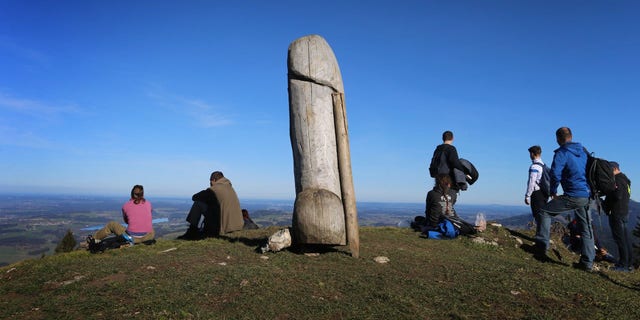 The peculiar sculpture suddenly vanished from a mountainside in Bavaria, Germany.
(Getty Images)

The almost 7-foot-tall (2 meters) sculpture appeared to have been chopped down over the weekend, the paper reported. All that remained on the 5,702-foot-high (1,738 meters) Gruenten mountain was a pile of sawdust and splinters.

The peculiar sculpture has become a hotspot destination for hikers in recent years and even appeared on Google Maps, where it was classified as a "cultural monument."

Media outlets attributed its sudden appearance on the mountain to a local legend that says it was made as a prank birthday present for a young man whose family didn't appreciate the gift. The 440-pound (200-kilogram) sculpture was then hauled up the mountain and left there.

Its disappearance comes just days after a mysterious monolith in Utah made headlines – before suddenly vanishing itself.

The Utah Bureau of Land Management has confirmed that the strange structure was removed by an unknown party. The monolith became a viral sensation after its recent discovery, sparking speculation about what it was and how it got here.

Fox News' James Rogers and The Associated Press contributed to this report.