A former Topshop design chief is suing controversial boss Sir Philip Green claiming she was left terrified after he mentioned the word ‘murder’ when criticising the quality of her work.

Mo Riach, 48, also alleges he subjected her to a sustained verbal attack in which he threatened to stamp on her phone and pulled at the neckline of her blouse.

She said she had been so disturbed by his ‘physically threatening’ behaviour that she suffered a breakdown and was forced to quit her ‘dream job’ as head of design at the retail giant. 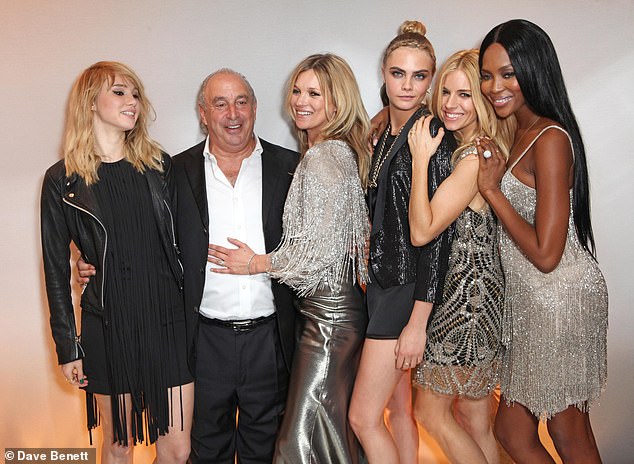 It comes after Sir Philip found himself at the centre of what has been dubbed the British #MeToo movement following allegations he sexually and racially harassed staff – all of which he denies.

At a preliminary hearing, his lawyers argued that Mrs Riach took too long to raise her case and there is no clear link between her claims and her breakdown around ten months later. 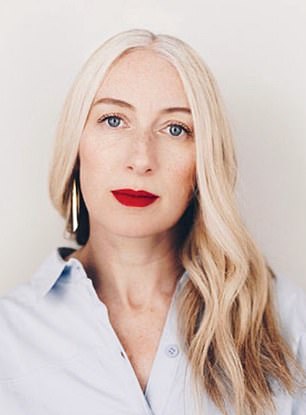 While Sir Philip’s lawyers argued that while they ‘accept the factual basis of the allegations’ between January and February 2018, they claimed contractual responsibility lay with Topshop.

But Mrs Riach, who had worked at the retailer since 2013, said the actions of Sir Philip were a ‘significant factor’ in her decision to resign last year.

She claimed that during a work trip to Istanbul in early 2018 he was ‘verbally and physically abusive’ in full view of top-level staff.

She told the hearing: ‘The Istanbul trip came on the back of a meeting where Sir Philip Green aggressively told me that the M on my necklace would stand for murder if he did not start seeing some ‘decent products’.’

Sean Jones QC – representing all three respondents – asked: ‘Did you seriously think that he was threatening to murder you?’

She said: ‘I don’t know what he was threatening – all I can say is that murder is a very strong word to use.

‘I can’t rationalise that sort of behaviour. Whether I felt like he was going to murder me or not, that word should never have been used. The look on his face while he said that … there was nothing jovial in it. It was serious and it was frightening.’

Of the Istanbul trip, she said in her statement: ‘On the first night at the dinner table with senior colleagues he shouted at me that if I didn’t put my phone down he would stamp on it with his foot.

‘And on the second day, when I was sitting at a table he came up behind me and jerked the chair suddenly, tipping me forward.

‘He also told me that I was not allowed to wear my necklace again until I had his permission to do so – my necklace is a prominent piece of jewellery with a large letter M as a pendant.’

However, Mr Jones argued the actions could not be viewed as violent.

Mrs Riach responded: ‘I have never been spoken to by anyone like that before. I would describe that as a very violent interaction.’

She claimed that Sir Philip later touched her in an ‘inappropriately intimate’ manner when she met him on a stairwell and he tucked her necklace in her top.

In her statement, she said: ‘He took hold of the M from my chest… He then quite gently pulled the edge of my top towards him, creating a gap between the top and my chest, and he used his other hand to put the necklace inside my top. 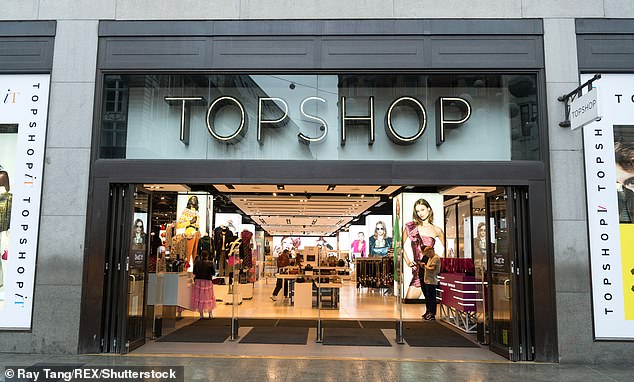 The mother has taken Sir Philip – along with Topshop and parent company Arcadia – to Central London Employment Tribunal claiming constructive dismissal, sex discrimination and breach of contract. A Topshop store is seen above

‘He was looking at me in the eyes as he did this and his face was uncomfortably close to mine. It was creepy – if it had been consensual, I would have described it as sensual – and inappropriately intimate. I believe there was clearly a sexual element to it and it crossed the line.’

Mrs Riach, from east London, said she did not make her complaint in the immediate aftermath of the Istanbul trip because she was ‘terrified’ of the tycoon.

She told the hearing: ‘I put my mental wellbeing to the side and tried to carry on. I wanted to pretend it never happened.. I wanted to be invisible. I was suffering mental health issues that I believe started from the incident [Istanbul]. I was broken.’

But in December 2018 she had a panic attack on the way to work and was signed off by her GP, who said she had ‘reactive depression and situational anxiety’.

She said she filed a complaint in January 2019 after Press coverage of similar claims against Sir Philip. But she resigned soon after a grievance hearing in April 2019 which cleared Sir Philip of any wrongdoing.

Mr Jones said he would ‘accept the factual basis of the allegations’, but questioned why the claimant had named Sir Philip in the case.

Employment Judge Anthony Snelson adjourned the case for a full tribunal next month.

A spokesman for Sir Philip, Arcadia and Topshop declined to comment.