Philippine leader made the admission as speculation swirls over his prolonged absence from the public eye. 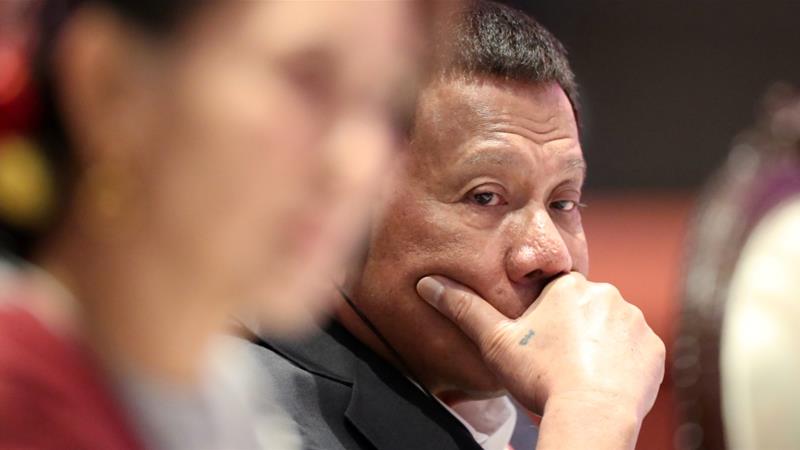 Philippine President Rodrigo Duterte has admitted that life is taking its “toll on my health”, as speculation swirls over the 74-year-old’s prolonged absences from the public eye.

Duterte cut short a trip to Japan last month because he was suffering from “unbearable pain” in his spine after a recent motorcycle accident, and has not spoken publicly for two weeks.

The accident came just 10 days after he revealed in early October that he has myasthenia gravis, an autoimmune disease that causes muscle weakness and can result in drooping eyelids and blurred vision.

“If you ask me … ‘Are you in the best of health?’ Of course not,” Duterte told GMA News television in an interview on Friday.

“All of the ailments, I have them because I am already old … Life has begun to take its toll on my health,” Duterte said.

The recent incidents have intensified speculation about his capacity to lead, although his spokesman Salvador Panelo has repeatedly said there is no need to issue medical bulletins on the president’s health.

Duterte has opted to work from his hometown Davao City, on the southern island of Mindanao, over the past week to get some rest, his spokesman has said.

The oldest Philippine leader elected, Duterte last week passed on the running of his signature anti-narcotics crackdown that has claimed thousands of lives to Vice President Leni Robredo, an arch-critic.

Duterte has not given public remarks since he attended a regional summit in Thailand that ended on November 4, shortly after he cut short his trip to Japan, having attended the enthronement ceremony of Emperor Naruhito with the aid of a cane.

Duterte had also previously said he suffers from migraines and Buerger’s disease, which is characterised by inflammation of blood vessels, usually due to smoking.

The Philippine constitution requires the handover of power to the vice president if the leader cannot perform his duties due to disability, resignation or death.

Bo Derek Talks About Getting Criticized for Her Infamous Cornrows

Chinese Zodiac: What is the Earth Monkey horoscope and what year is it?