Life on the high seas: Unseen photos taken by Royal Navy officer who fought in the Second Boer War in 1899 show blown up bridges and railways and sailors relaxing on leave in the Far East

Fascinating previously unseen photographs taken by a British naval officer who travelled the world while serving on a Royal Navy ship 120 years ago have come to light.

Henry Taprell Dorling served on cruiser HMS Terrible in the Second Boer War in South Africa before heading on to the Far East.

The war was the first major conflict of the 20th Century, claiming more tens of thousands of lives on both sides and signalling the birth of the modern British Army.

The images of the conflict show the crew on board the vessel as well as blown up bridges and encampments as Dorling was in the thick of action.

The album, containing 74 photos, also features his time afterwards in Hong Kong, where he enjoyed a welcome respite with his fellow officers.

Another striking image shows a nurse setting off an enormous artillery gun in front of an audience.

The photographs are set to sell for £3,000 in a London auction tomorrow by auctioneers Charles Miller. 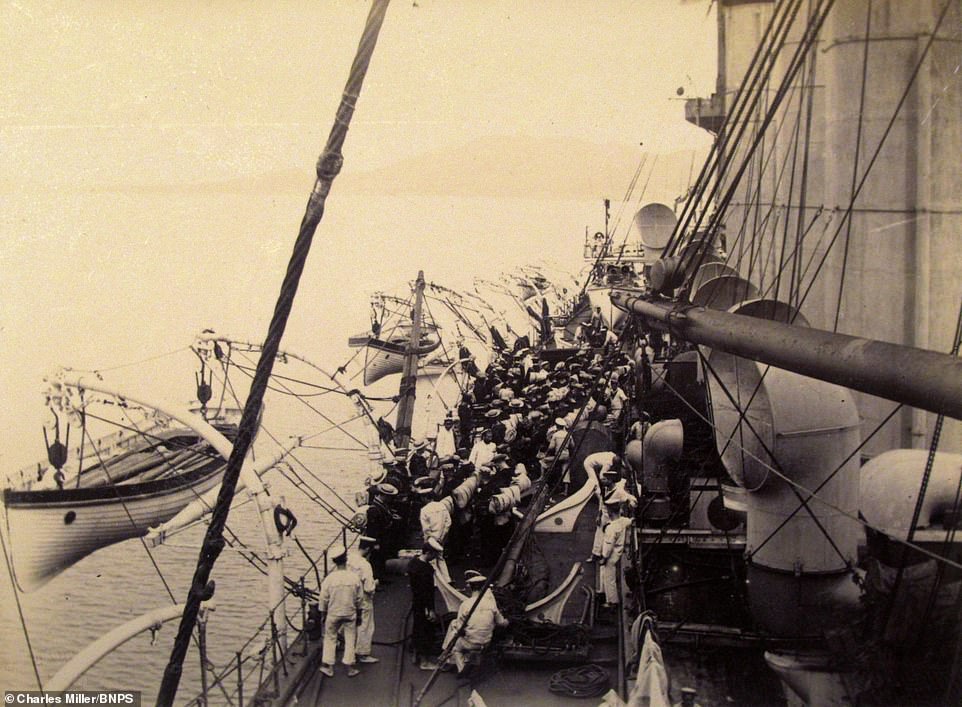 Fascinating previously unseen photographs taken by a British naval officer who travelled the world 120 years ago have come to light. Henry Taprell Dorling served on Royal Navy cruiser HMS Terrible in the Second Boer War in South Africa before heading on to the Far East. Pictured: One image seen in Dorlin’s album shows the crew of HMS Terrible on board the ship 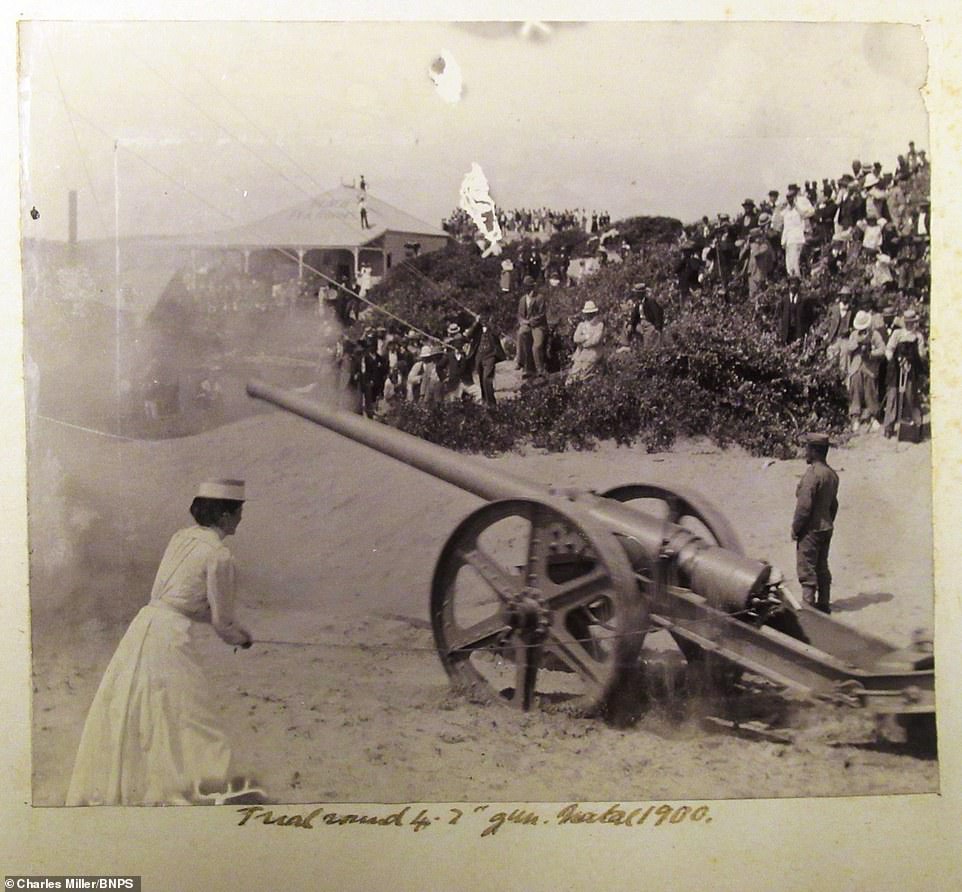 One striking photo shows a nurse setting off a large field gun while a large crowd of spectators watched from a hillside in 1900. The album, containing 74 photos, also features his time afterwards in Hong Kong, where he took pictures of locals as he enjoyed a welcome respite with his fellow officers 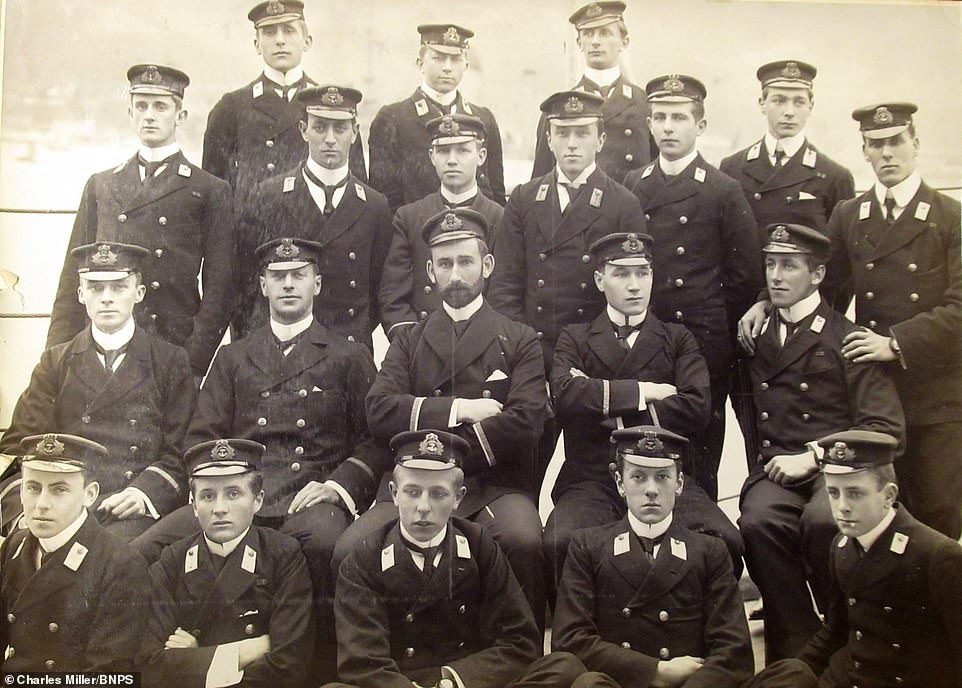 The HMS Terrible gun room crew are pictured posing for a photograph on board the vessel at the turn of the 20th century. The ship was one of only two of the Royal Navy’s Powerful class of cruisers. HMS Terrible was initially bound for China when her captain, Percy Scott, persuaded the admiralty to allow him to intervene in hostilities in South Africa 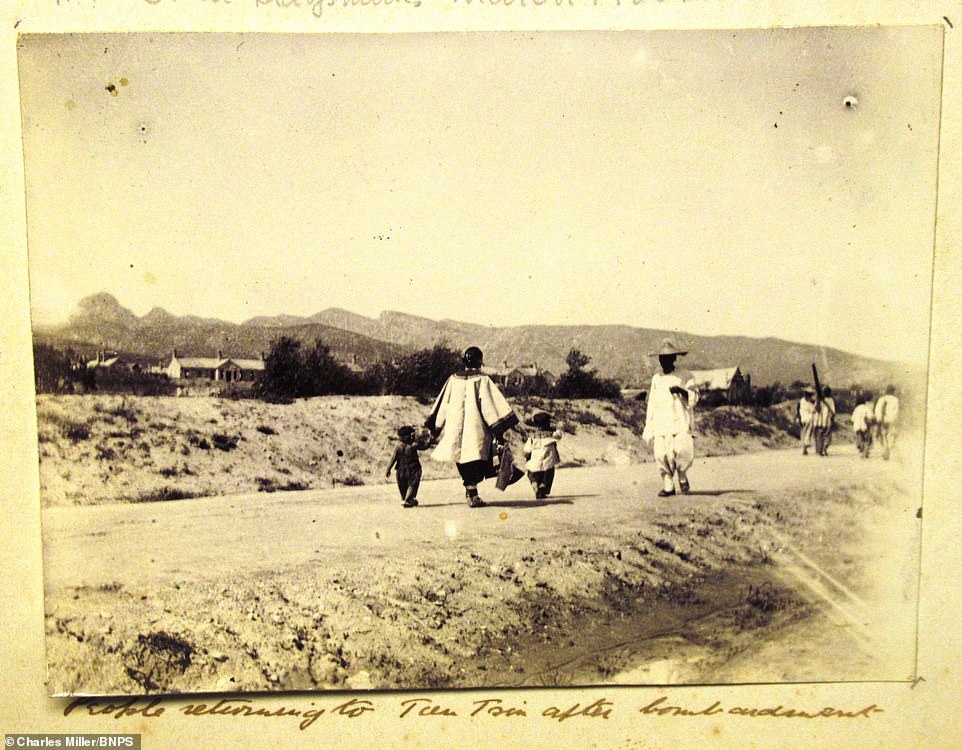 The album, containing 74 photos, also features Dorling’s time afterwards in Hong Kong where he took pictures of locals. Above, a woman with two small children can be seen walking as a man in a hat comes her way. Dorling’s album, containing 74 photos, has been consigned for sale by a private owner who acquired it from a deceased estate 10 years ago with auctioneers Charles Miller, of London. It is tipped to sell for £3,000 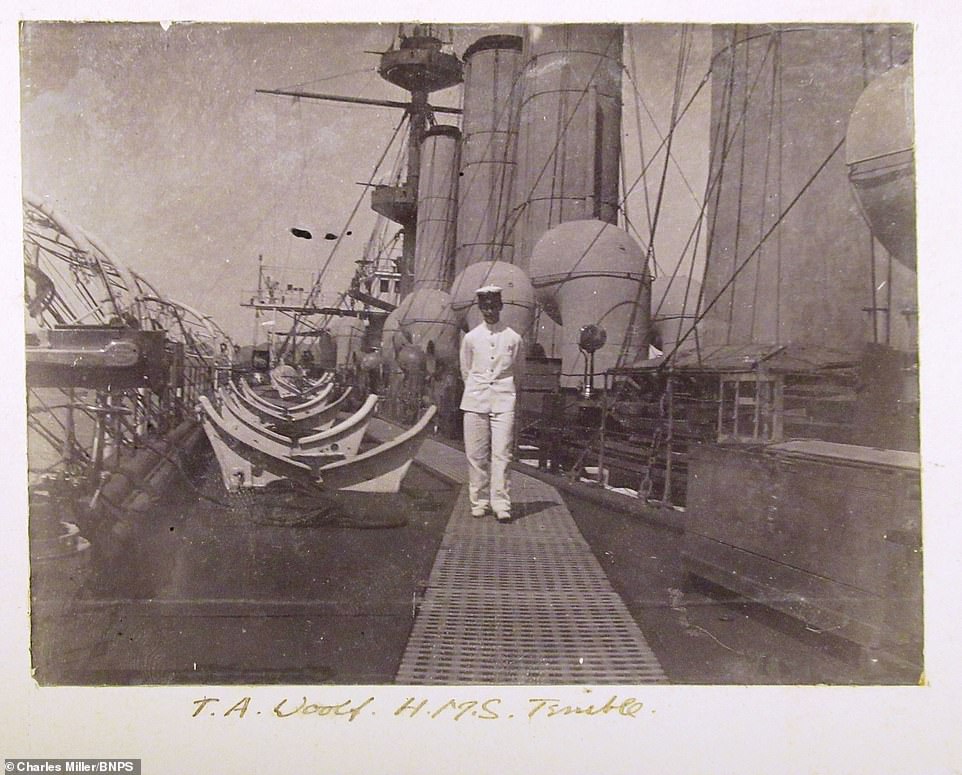 This image shows a sailor, named as T.A. Woolf by Dorling in the photo’s caption, standing on board the HMS Terrible. Captain Scott adapted the guns on the ship to allow them to be used on land – so they could support the army in the second Boer War. The army lacked any long-range artillery and had found they were being bested by the weapons the Boers had 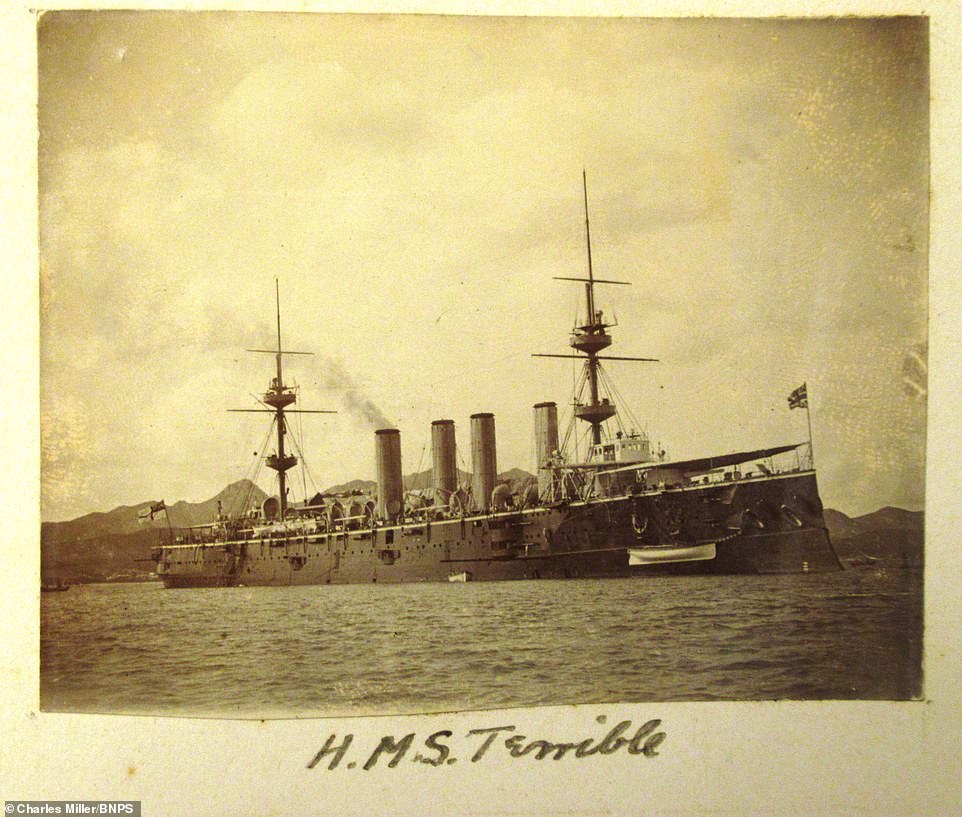 HMS Terrible is seen above while at sea. Captain Scott’s effort to re-purpose his ship’s guns for the fighting on land saw his men successfully mount them on to make them able to move. A brigade of men from the Terrible then took part in the effort to aid troops stationed at Ladysmith 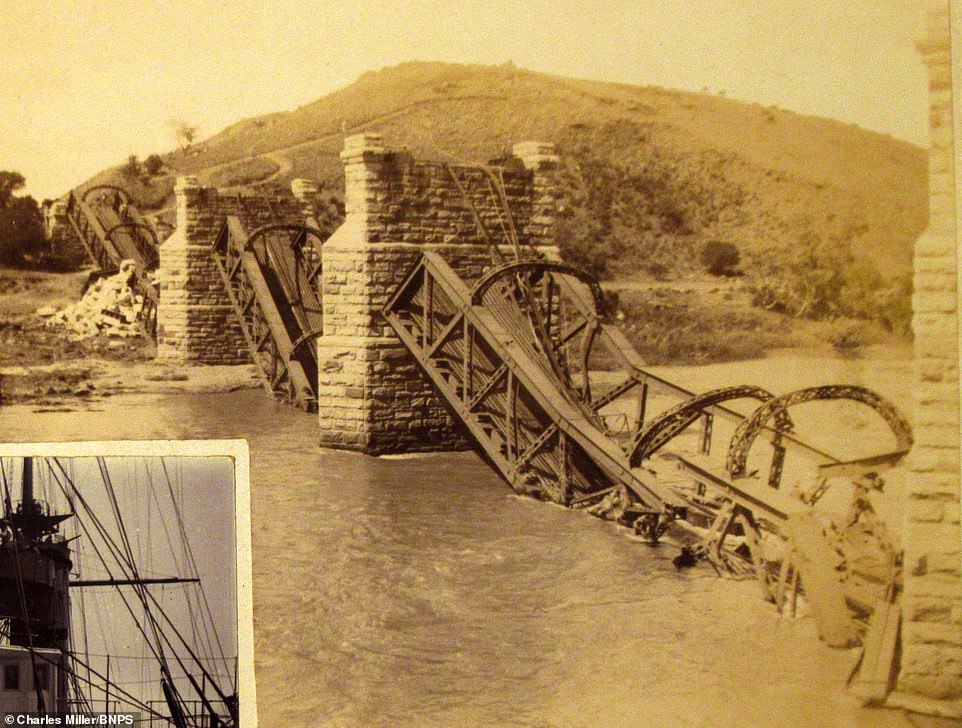 One image of the Boer War conflict in Dorling’s album shows a blown up bridge. The war lasted for three years from 1899 to 1902 and would claim 22,000 British and more than 6,000 Boer lives. Around 25,000 Afrikaner also died in the war, most of them in concentration camps 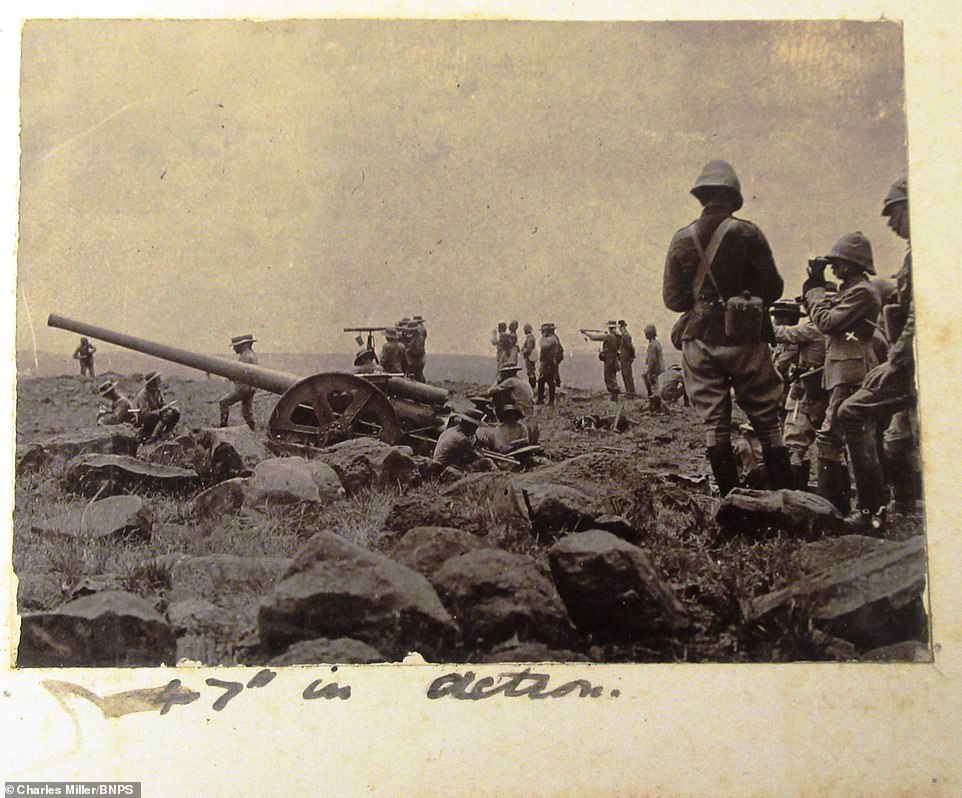 Dorling was on the front line during the Second Boer War and pictured soldiers looking out at their enemies with binoculars while surrounded by guns. Despite the British Army’s vast numbers, officers struggled to combat the much smaller but well-trained and mobile Boers 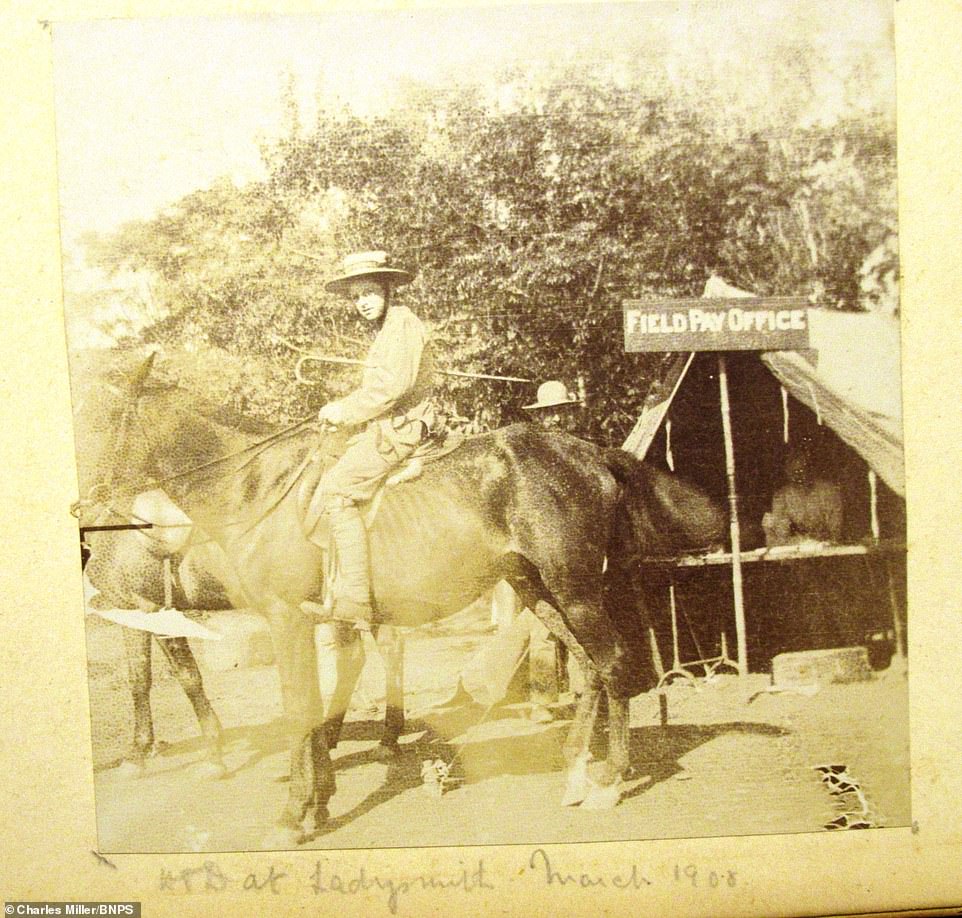 As the British Army was besieged by Boer fighters in the garrison town of Ladysmith, Natal, the Royal Navy landed guns from HMS Terrible and her sister ship HMS Powerful to help in the relief of the siege. Pictured: A man riding a horse is seen in March 1908 outside a Field Pay Office in Ladysmith, South Africa 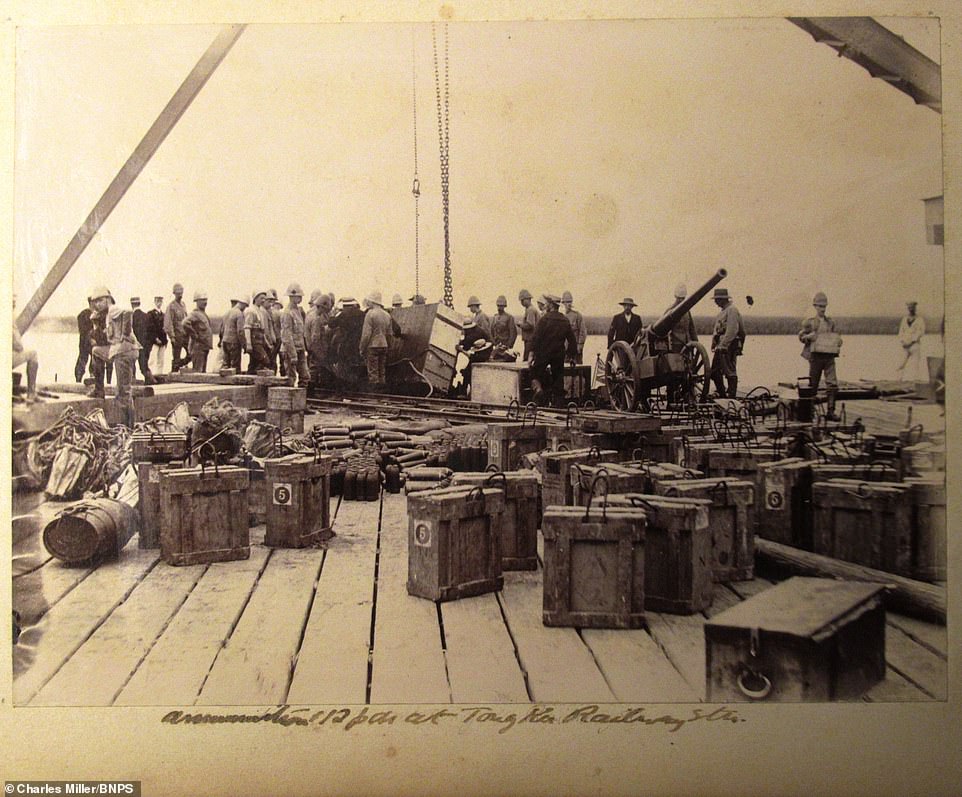 Troops from HMS Terrible are seen in South Africa with their weapons in the foreground. Captain Scott was appointed as the military commandant after arriving at Durban. As well as re-purposing the guns, Scott also adapted a small signal light so it could be used to communicate with forces which were besieged in Ladysmith 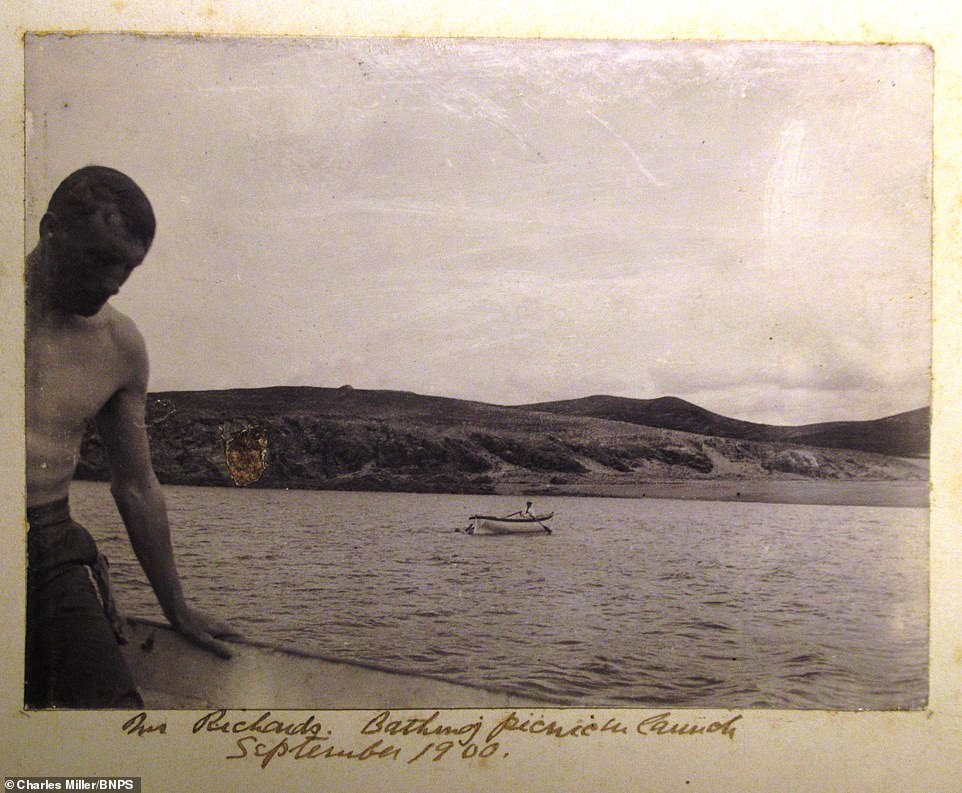 Dorling’s above image shows a man, identified only as Richards, appearing shirtless after going bathing. On the water behind him another man can be seen on a rowing boat 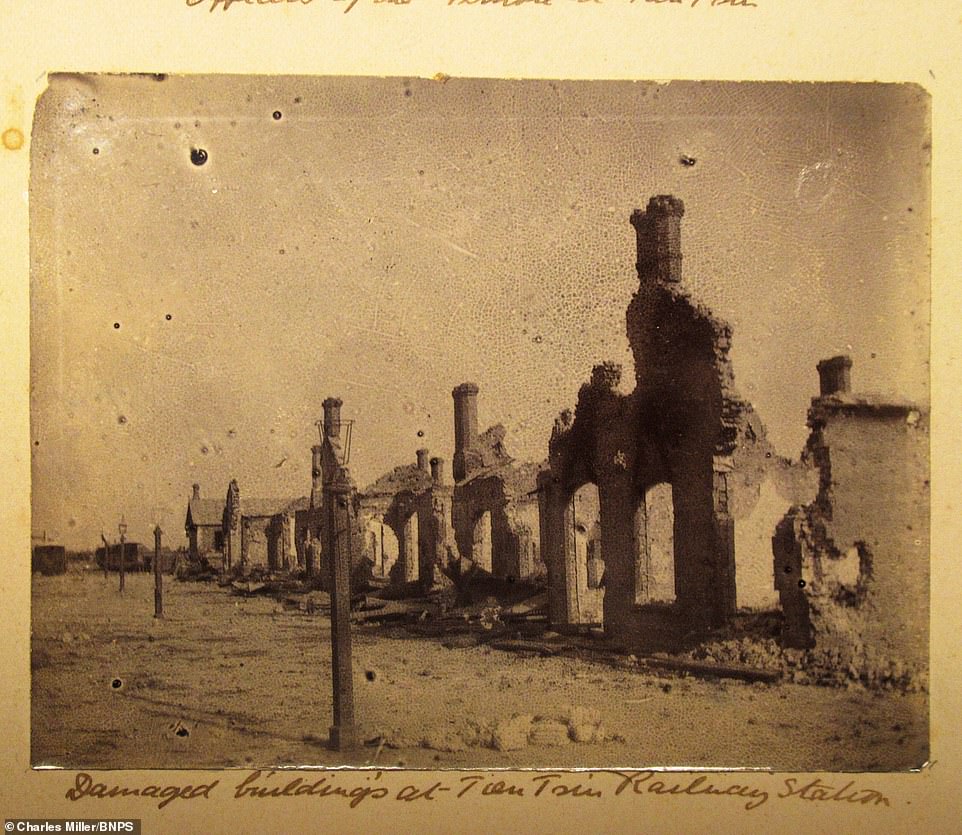 The Second Boer War (11 October 1899 – 31 May 1902) was fought between the British Empire and two independent Boer states, the South African Republic and the Orange Free State, over the Empire’s influence in South Africa. Pictured: Damaged buildings at a railway station during the Second Boer War 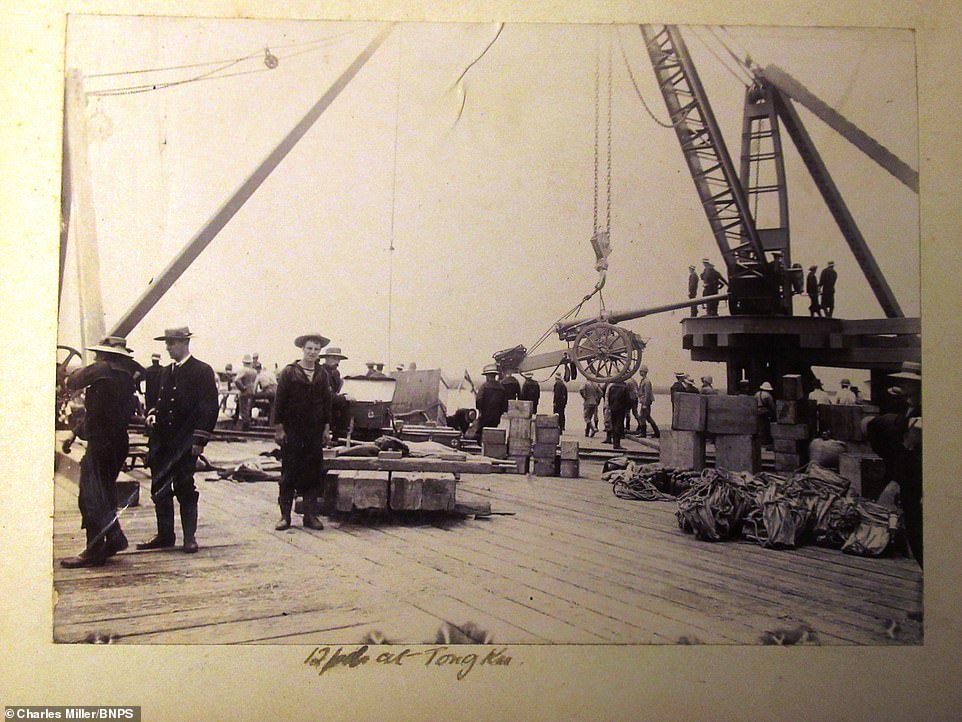 Crew members are pictured on board the HMS Terrible as they unload their guns, which have been re-purposed for use on land 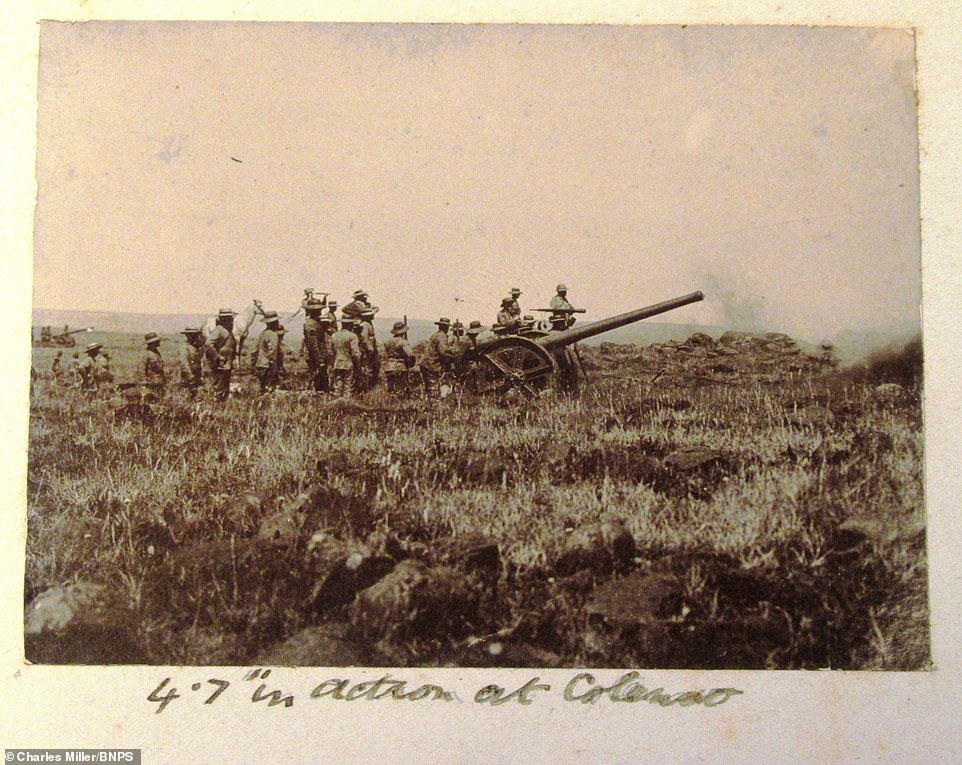 The war was the first major conflict of the 20th Century, claiming tens of thousands of lives on both sides and signalling the birth of the modern British Army. Pictured: Soldiers fire a fun during the Boer War 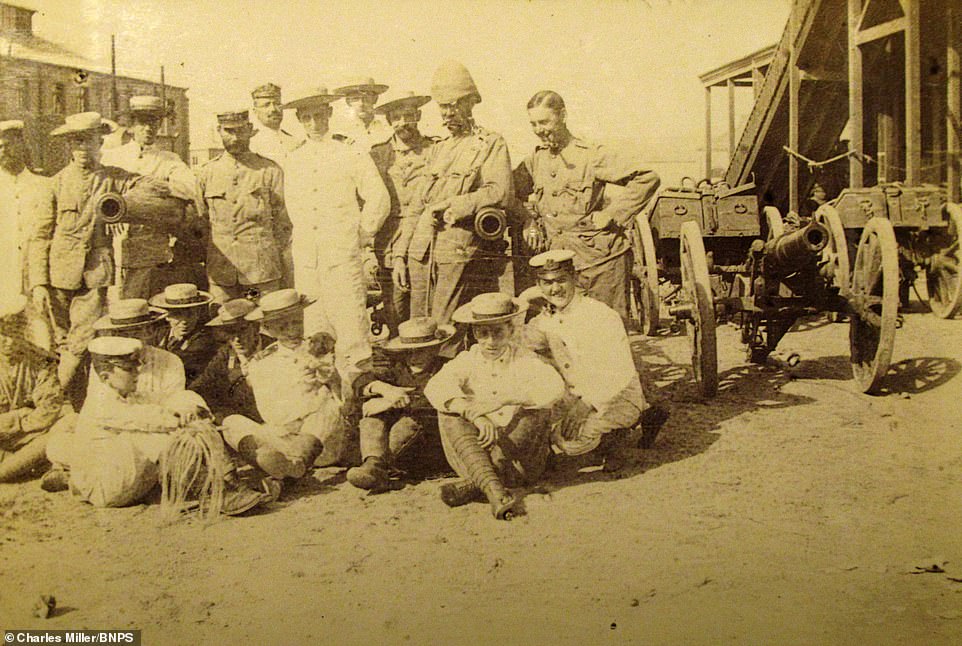 Some of the HMS Terrible Crew pose for a picture out in the field – with some resting on the barrels of guns. Auctioneer Charles Miller said the album was a ‘rare collection of eye-witness views’ of and from HMS Terrible. Also included, he said, were ‘interesting views’ of the ship’s officers ‘relaxing in Hong Kong on their return’. He said it would undoubtedly generate significant interest’ 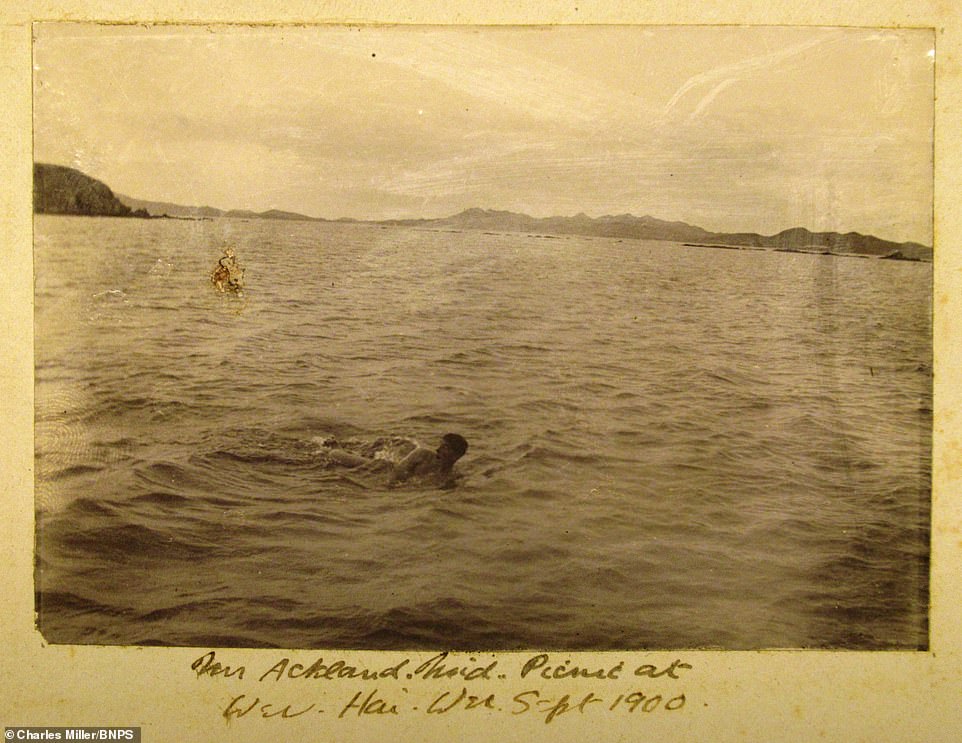 Dorling’s images also showed the crew of HMS Terrible enjoying some down time. Above: A crew member takes a dip in 1900 after a picnic 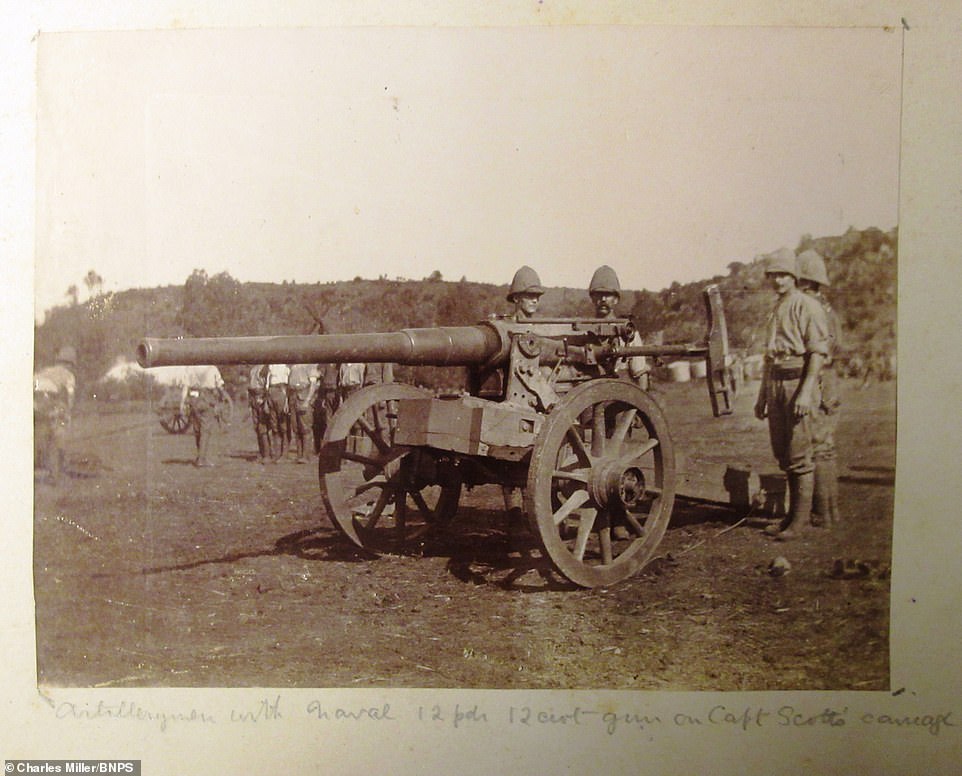 Incredibly, one of the guns re-purposed on the orders of Captain Scott is seen above. The caption said the image showed ‘artillery men’ with the ‘naval’ guns mounted on ‘Captain Scott’s carriage’ 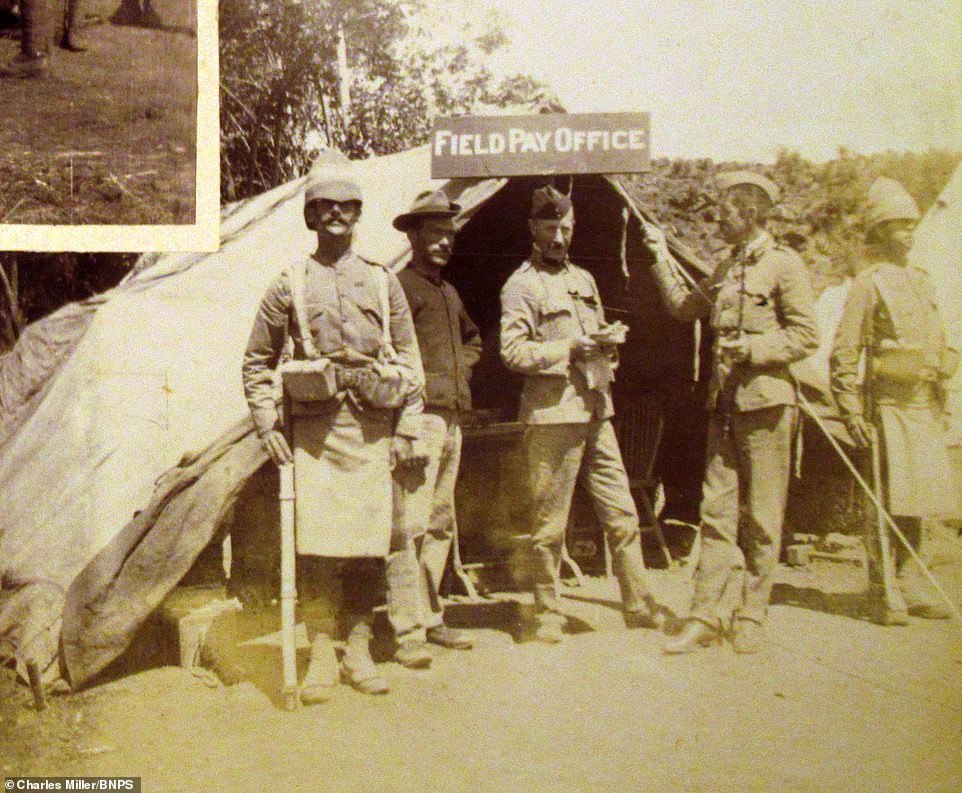 British soldiers who were fighting in the second Boer War are seen above standing outside a ‘field pay office’ during the conflict. Three men appear to be at ease, while two uniformed soldiers either side of them look like they’re on guard duty 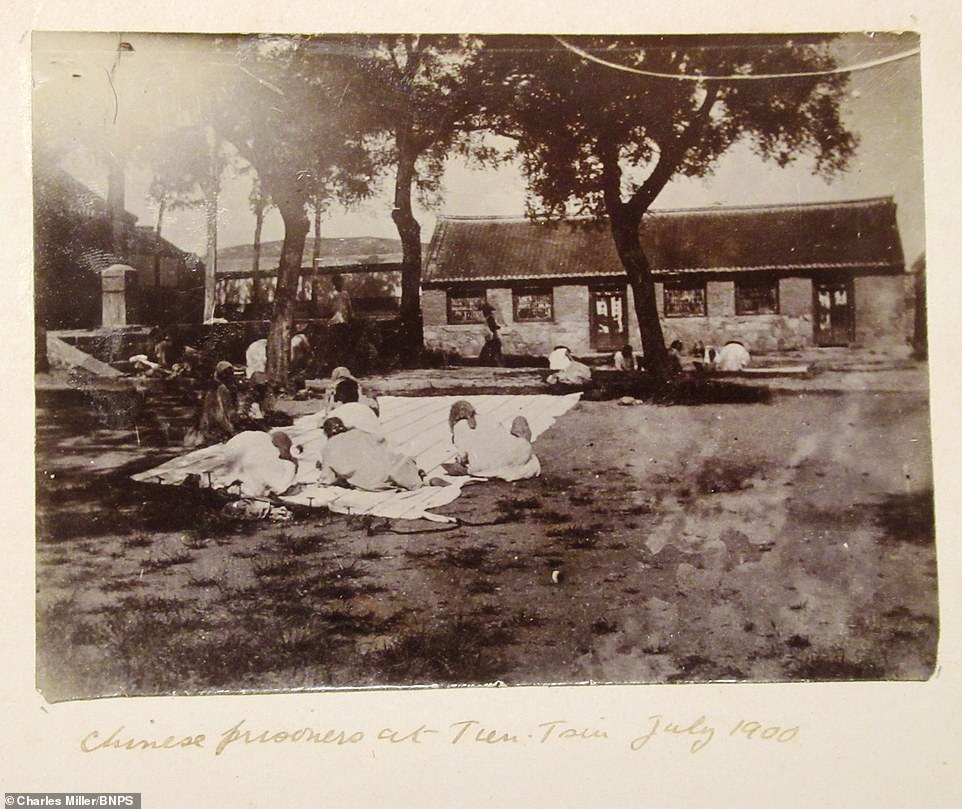 Dorling, who served in the navy from 1897 to 1929 and came out of retirement during World War Two, also took photos of the stunning scenery including an old Chinese fort. Pictured: Chinese people enjoy laying on a blanket in a garden in July 1900 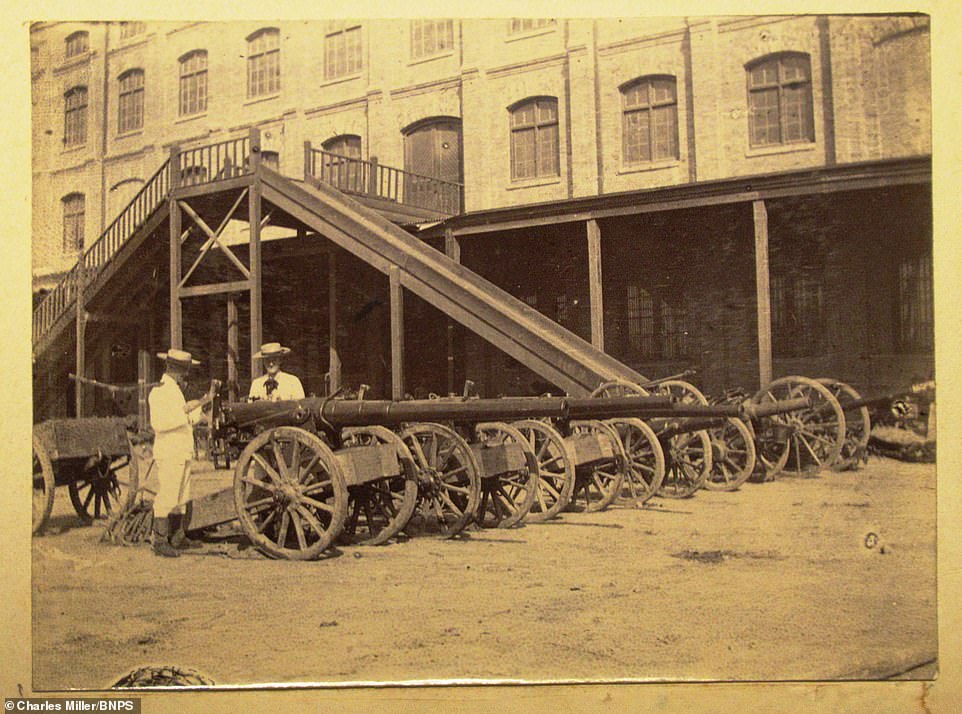 The enormous guns taken from HMS Terrible are seen above laid out in a row as two men, wearing rimmed hats, stand behind them 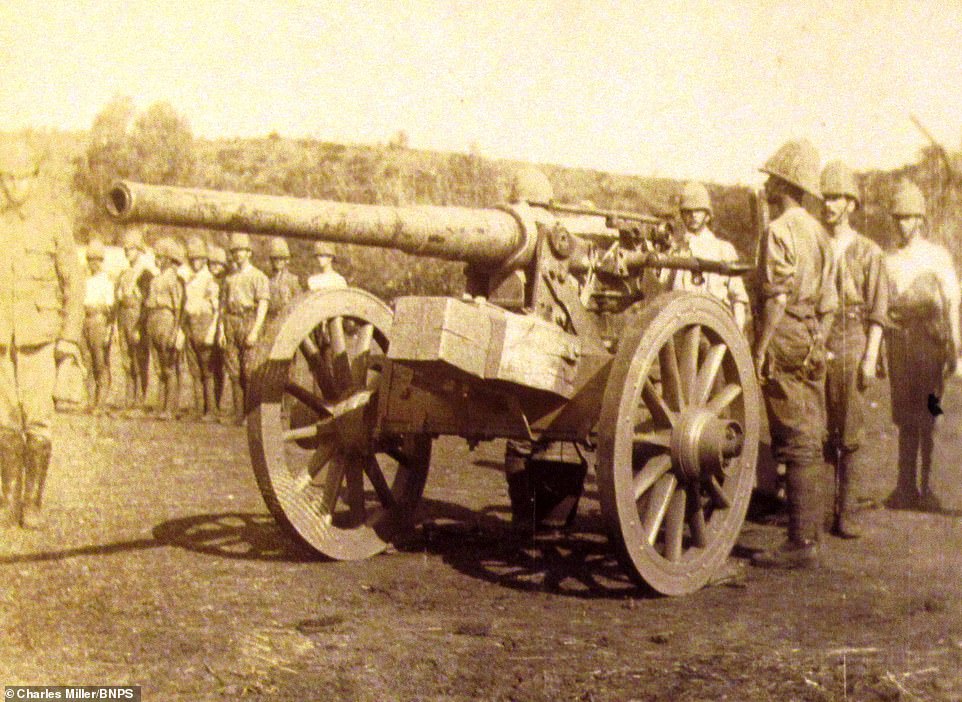 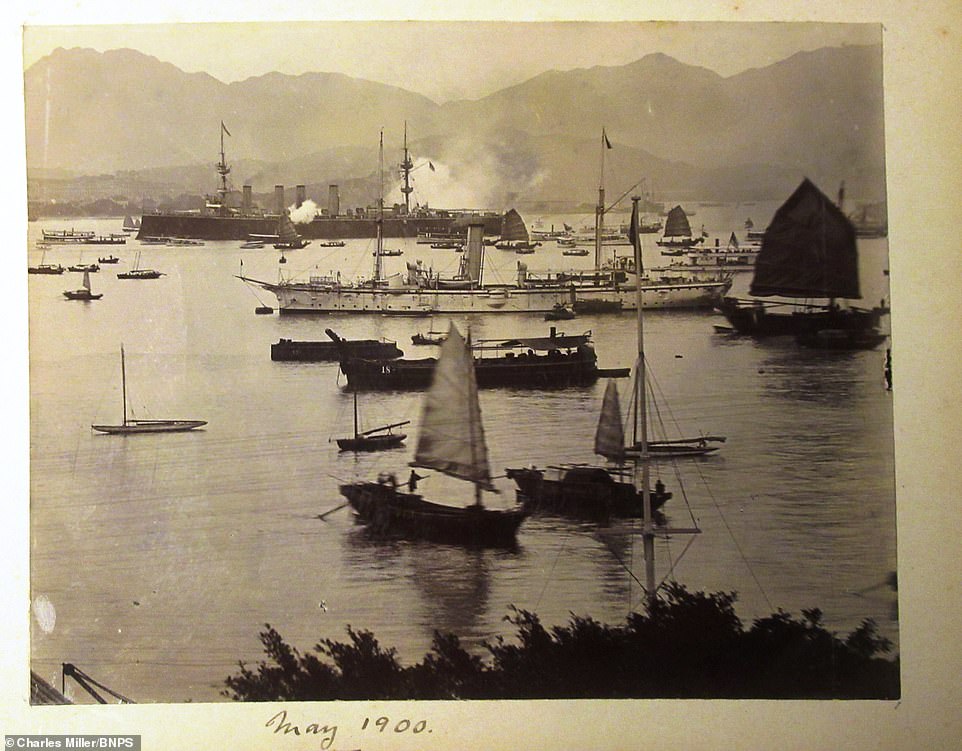 After helping out in South Africa, HMS Terrible sailed to Hong Kong, a British territory, where they helped forces content with an anti-imperialist movement known as the Boxers. Above: This image was taken in Hong Kong in May 1900 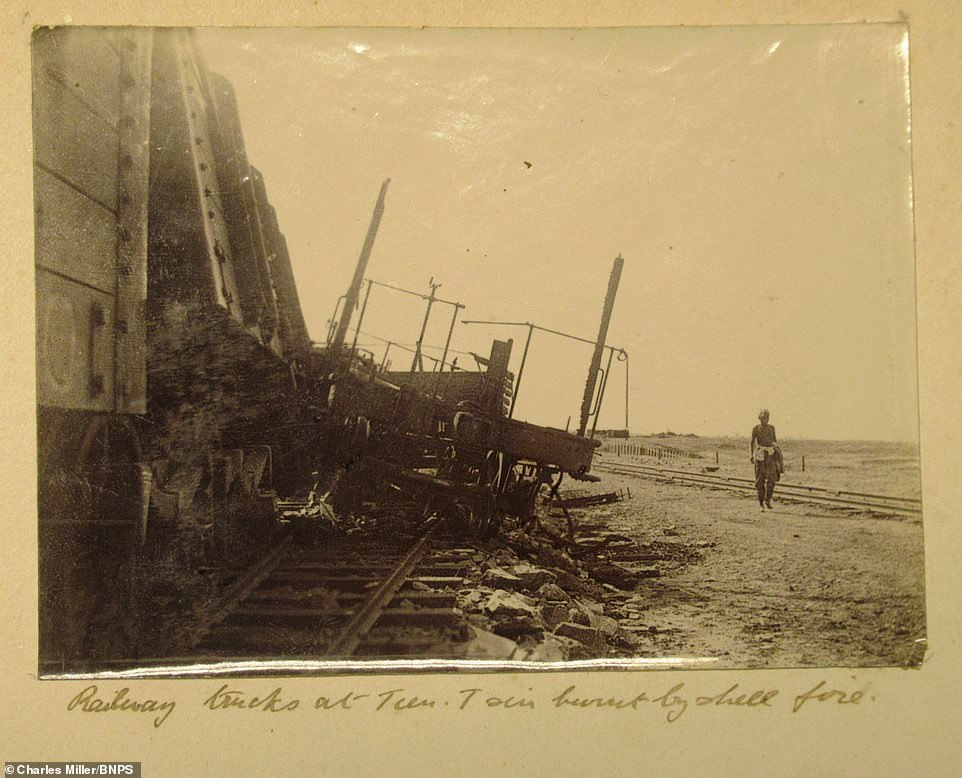 During his time in South Africa, Dorling also took this image of a derailed train, which he said had been knocked off course by the force of a shell 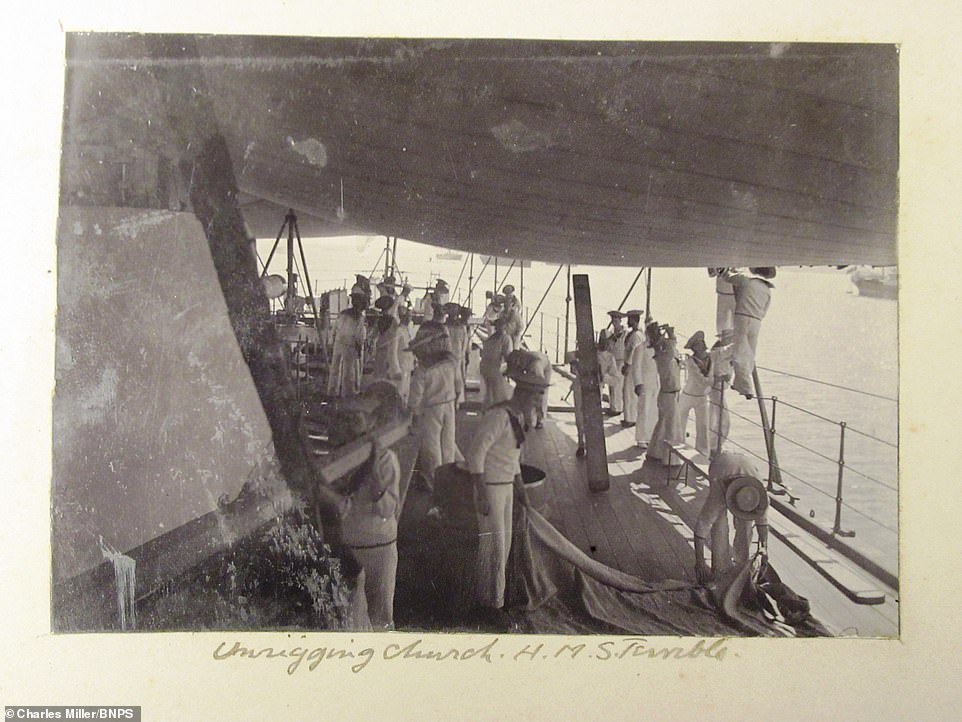 Dorling took this image on HMS Terrible whilst crew members were removing an awning following a church service on the vessel. He wrote in the caption: ‘Unrigging church’ 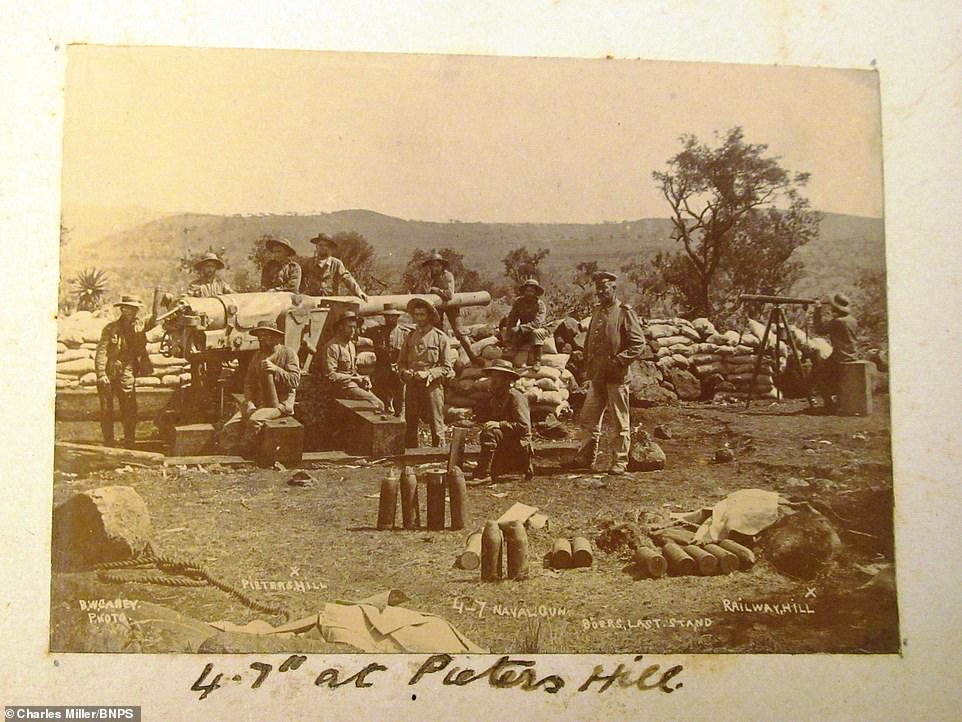 In one week in the Second Boer War – 10-15 December 1899 – the Boers won a number of battles and besieged the key towns of Ladysmith, Mafeking, and Kimberley. Pictured: Troops at ‘Pieter’s Hill’ in South Africa

The second Boer War: The battle which claimed 22,000 British lives

The second Boer War broke out after tensions between Britain and the Boers failed to heal following the first war in 1880-1881.

The Transvaal and Orange Free State were the two states in 1899 of what is today South Africa.

But Afrikaners, the descendants of Dutch and French settlers, were angry as they had to pay high rates of taxes and wanted equal rights to those in the British colonies of Cape Colony and Natal.

To make matters wors,e thousands of mainly British Uitlanders (foreigners) had come to the Transvaal for the gold rush.

Around 25,000 Afrikaner also died in the war, most of them in concentration camps.

Despite the British Army’s vast numbers, officers struggled to combat the much smaller but well-trained and mobile Boers.

In one week – 10-15 December 1899 – the Boers won a number of battles and besieged the key towns of Ladysmith, Mafeking, and Kimberley. 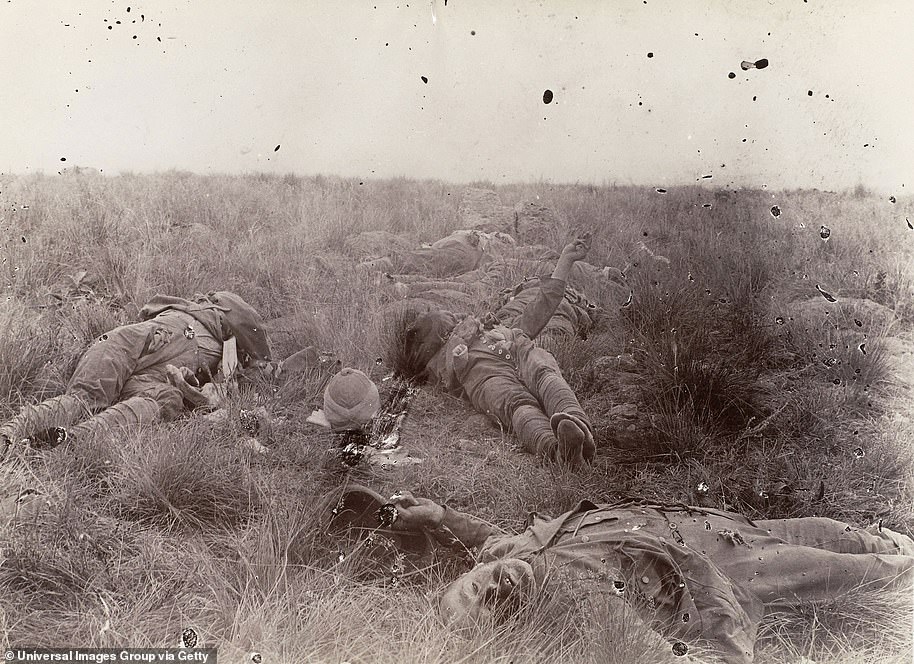 The Second Boer War lasted three years from 1899 to 1902 and would claim 22,000 British and 12,000 African lives. Pictured: Dead English soldiers killed at the battle of Spion Kop

The British were cut off in Ladysmith after being surrounded by the Boers in early November 1899.

Some top officers escaped on the last train but the remaining soldiers had to dig in defend the town in east South Africa.

Another famous battle was for Spion Kop, 24 miles from Ladysmith, which resulted in a victory for the Boers.

As it was the highest peak in the region it was a key target for the British to capture.

British troops had captured the summit by surprise in late January 1900 but morning fog blinded them from seeing they were overlooked by Boer guns on surrounding hills.

Boers then fired down on the British who had dug poor defensive positions.

The battle would claim 350 British lives and almost 1,000 wounded.

The British eventually won by the Army’s sheer numbers while officers used a ‘scorched earth policy’ to cut off supplies to the Boers.

Love Island's Kem Cetinay 'has made £1.2m' since leaving the villa – and Amber Davies 'has earned £1m'

Duchess of Sussex, Prince Harry’s ‘secret wedding’ was not a legal ceremony