PICTURED: Female assassin gang member who shot dead a former Mexican governor in the back of the head inside a restaurant bathroom as cops offer $50,000 reward for her arrest

Cops are hunting for a female assassin who gunned down a former Mexican governor inside a restaurant bathroom.

Authorities in Mexico have released surveillance camera images of the woman wanted for executing former governor of Jalisco and ex Institutional Revolutionary Party member Aristoteles Sandoval, 46, in a restaurant on December 18 in the resort city of Puerto Vallarta.

Pictures show a woman with blonde hair wearing a grey hoodie and blue jeans, and her male accomplice fleeing the eatery Distrito 5 after the shooting.

Local newspaper Mural reports that the woman shot the 46-year-old ex-governor three times; one in the back of the head, a second shot struck him near the heart and the third shot hit his intestines. 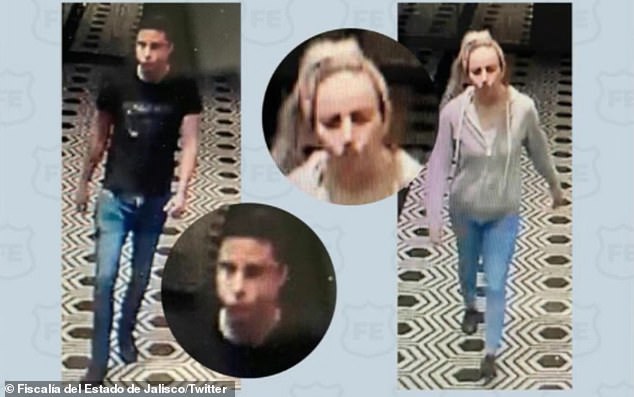 The Jalisco State Attorney General’s Office revealed Wednesday photos of two suspects (pictured) wanted for the December 18, 2020 murder of former Jalisco governor Aristóteles Sandoval. The woman, according to local newspaper Mural, shot Sandoval three times, including once in the back of the head 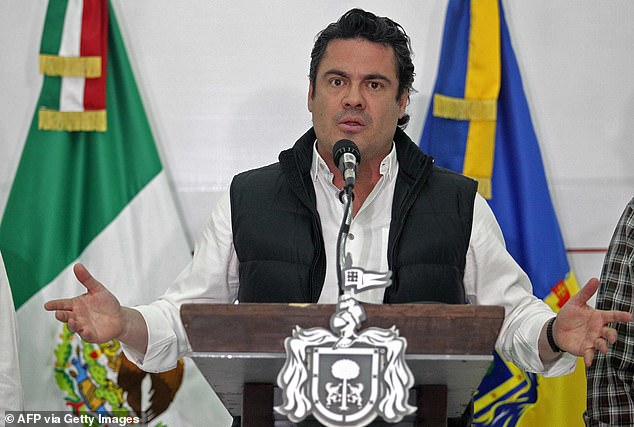 Attorney General Gerardo Solis announced a $50,000 reward is being offered to anyone who can come forward and provide information that could lead to the arrest and/or prosecution of both individuals.

‘Two people have been identified, a man and a woman, who could be related to the events under investigation,’ Solis said.

‘In order to obtain truthful information that allows us to identify these people, the State Attorney’s Office offers a million pesos [$50,000] as a reward for those who provide accurate data on each of them.’ 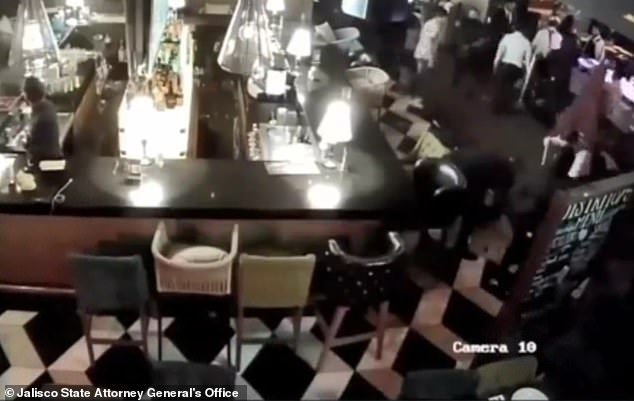 Still image from a video released by the Jalisco State Attorney General’s Office shows workers at the Distrito 5 restaurant in Puerto Vallarta cleaning up the area around the bar moments after former governor Aristóteles Sandoval was executed inside a bathroom on December 18, 2020 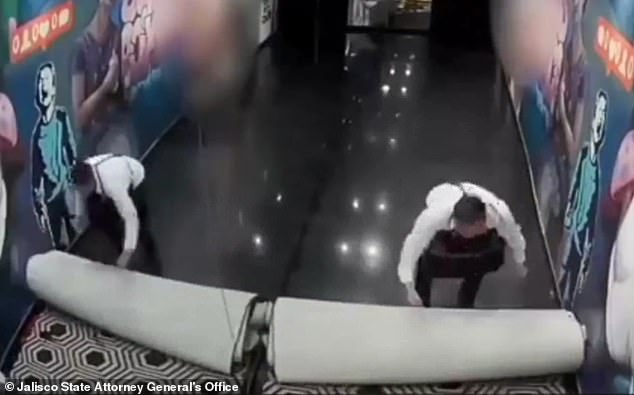 Sandoval arrived at the restaurant at 10pm local time with three friends, businessman Eduardo Riguero, Joaquín Sandoval, who is not related to the former governor, and Patricia Ceballos.

Sandoval, who had his security detail present, went to the bathroom by himself and was gunned down shortly after 1am.

A shootout erupted as his bodyguards tried to evacuate him from the restaurant, and found their escape was blocked by more gunmen outside. At least one of the security guard was seriously injured, but survived the attack. 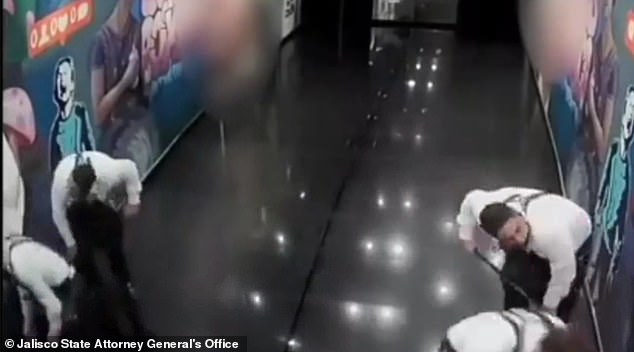 Restaurant employees in Puerto Vallarta, Mexico, are seen on a security video scrubbing the floor following the execution of former Jalisco governor Aristóteles Sandoval on December 18, 2020

Authorities have so far arrested four workers and charged them with obstruction of justice and concealing evidence. A judge has issued arrest warrants for six other workers, who are wanted for the same offenses.

Last week, Solis revealed footage that showed Distrito 5 workers cleaning the floor near the bar area and also removing a rug and scrubbing the hallway floor that leads to the bathroom.

Sandoval was a member of the old ruling Institutional Revolutionary Party who governed the state from 2013 to 2018.

His term was overshadowed by the local cartel’s rise from obscurity under Joaquín ‘El Chapo’ Guzmán’s Sinaloa Cartel to become one of the most powerful in Mexico, leaving a trail of death behind it.

More murders and clashes with security forces followed. Authorities said the gang bought off thousands of police as it gradually extended its reach across Mexico.

Today the Jalisco New Generation Cartel competes with the Sinaloa Cartel for control of much of the drug trade inside Mexico as well as to the United States.

The cartel’s leader, Nemesio ‘El Mencho’ Oseguera, is wanted by the U.S., which is offering a $10 million reward for information leading to his arrest and/or conviction.

In May 2015, authorities launched an abortive attempt to capture El Mencho, but the efforts ended with the shooting down of a military helicopter by cartel henchmen in western Jalisco.

Jury selection to start in trial over Ahmaud Arbery's death