Home » World News » PIERS MORGAN: Sussexes love to preach one thing and do the opposite

PIERS MORGAN: We need an urgent vaccine to save us from the Duke and Duchess of Polluting Hypocrisy and their cynical campaign to set up a rival money-grabbing renegade Royal Family

There’s a new advisory on the Duke and Duchess of Sussex’s website Archewell, the one named after the son they were determined to keep private so he wouldn’t be used as a media tool.

‘We love having you here,’ the message reads, ‘but we’re mindful of screen time. Why not take a break? We’ll still be here.’

This disingenuous virtue-signaling guff was presumably crafted by one of the couple’s partners, the Centre for Humane Technology, which counsels how to remove toxicity from one’s life.

I’d certainly welcome a break from the world’s most toxic royals whose laughable mission statement is to put ‘compassion into action’ but who never miss a chance to spew unsubstantiated abuse about their own families that they persistently trash and disown.

As with everything in Meghan and Harry’s ludicrous world, they love to preach one thing and do the exact opposite.

They’ve just finished a four-day trip to New York which even by their two-faced standards set a new low bar for hypocrisy.

Ostensibly designed for them to lecture the world’s ‘ultra-rich’ pharmaceutical firms on ‘equality’, something the privileged, pampered prima donnas know all about from the palatial comfort of their Californian mansion, the trip was in fact a ruthlessly cynical attempt to establish their new alternative Royal Family.

And it made me puke. 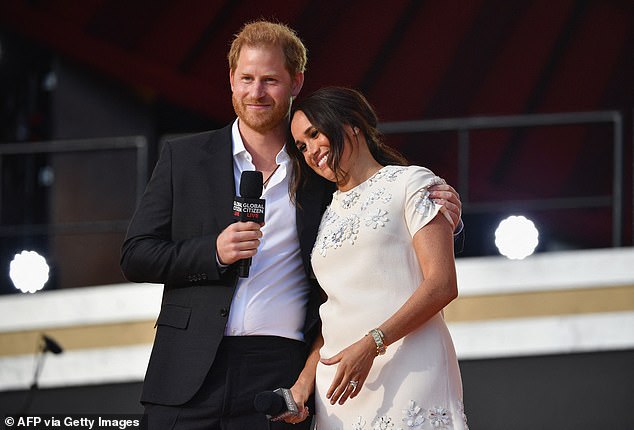 Meghan and Harry just finished a four-day trip to New York, and spoke during the 2021 Global Citizen Live festival in Central Park

Virtue-signaling message on Harry and Meghan’s website reads: ‘We love having you here… but we’re mindful of screen time. Why not take a break? We’ll still be here’

Let’s remind ourselves that the Sussexes quit Britain and royal duty because they supposedly wanted privacy.

The duplicity comes from their pretense to loathe everything the Royal Family and Monarchy stands for, but at the same time gleefully milking their royal titles with the obscene greed of a sounder of swine, the term for a group of feral hogs that destroys everything in its path.

Meghan and Harry have their noses permanently rammed in the regal trough, and it’s obvious that they now intend to keep them there until they’ve made themselves repulsively rich and famous.

In this regard, they’re the royal version of the Kardashians – people with no discernible talent other than for pimping themselves out to the highest bidders and a craven desire to air their dirty family linen in public for financial gain.

But at least the Kardashians’ mission to be billionaire TMI merchants is founded on a basic honesty: they don’t pretend to be talented or saving the planet.

By contrast, at the heart of the Sussexes’ stated campaign to ‘uplift and unite’ us all with their searing compassion – unless you’re related to them, then you can go **** yourself – lies outrageous two-faced deceit.

For a prime example, the self-styled eco-warriors never stop lecturing the world about the environment.

Only last month, Harry warned us that climate change is one of the ‘most pressing issues we are facing.’

And one of the purposes of the Global Citizen Live concert they attended on Saturday night was to demand tough new eco laws halving US emissions by 2030.

So, you might assume they lead by example in deliberately reducing their own carbon footprint?

In fact, they deliberately do the complete opposite.

On Saturday, the Sussexes flew back into Santa Barbara from New York in a private plane, a Dassault Falcon 2000 jet. It will have produced around 17 tons of carbon emissions for the flight. 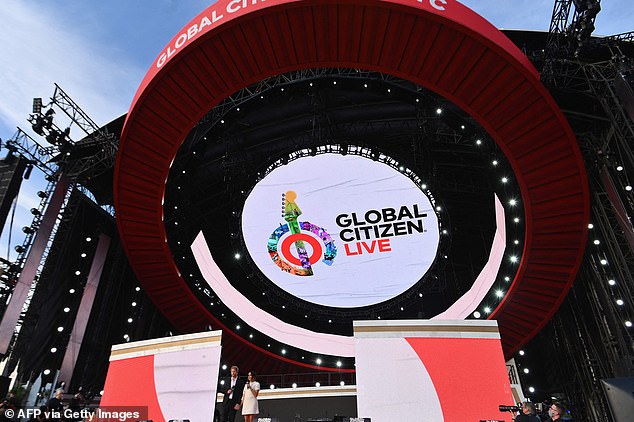 One of the purposes of the Global Citizen Live concert was to demand tough new eco laws halving US emissions by 2030. Meghan and Harry flew home on a private jet.

It’s the same mode of transport they have repeatedly used – often as guests of celebrity pals like Elton John and George Clooney – despite being criticized for obvious double standards.

Now, I’ve nothing against private jets, and have used them myself, but I’m not constantly lecturing the world on the urgent need to reduce its carbon footprint.

The hypocrisy is breath-taking.

Their mode of road travel follows a similar theme.

Waiting for them on the tarmac in Santa Barbara was a large gas-guzzling 4×4.

In New York, the Prince and Princess of Pollution sped around Manhattan in a luxury convoy of at least three Range Rovers and SUVs.

To quote from their own speech on Saturday, this willful disregard for their own eco-hectoring is ‘like throwing away life vests, when those around you are drowning.’

And what were they doing there anyway?

Ostensibly, the Sussexes were in the Big Apple to harangue pharmaceutical firms for not doing enough for ‘equality’ when it comes to dispensing vaccines to poorer countries.

As with everything else these two harp on about, the real issues surrounding vaccines and patents are far more complicated than they suggest, and the companies they’re attacking have already saved tens of millions of lives with their brilliant work in this pandemic.

But one of Global Citizen’s main objectives is also to ‘defeat poverty.’

Well, I’m sure we can all agree that nothing screams defeating poverty more than Meghan Markle sporting $100,000 worth of designer clothes – though whoever paid her to wear that unflattering bulky winter wardrobe on warm sunny days probably deserves a refund – and lavishly expensive jewelry as she trotted around impoverished parts of Harlem where she read schoolkids extracts from her own book, The Bench. 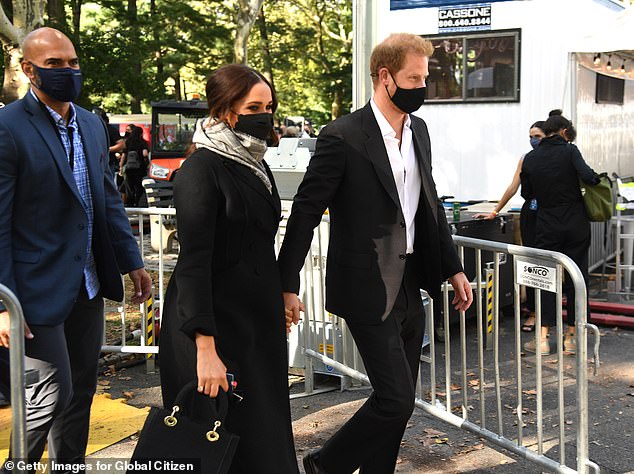 Meghan sported almost $100,000 worth of designer clothes during her trip, including bulky winter coats and a scarf despite the New York weather being warm and sunny 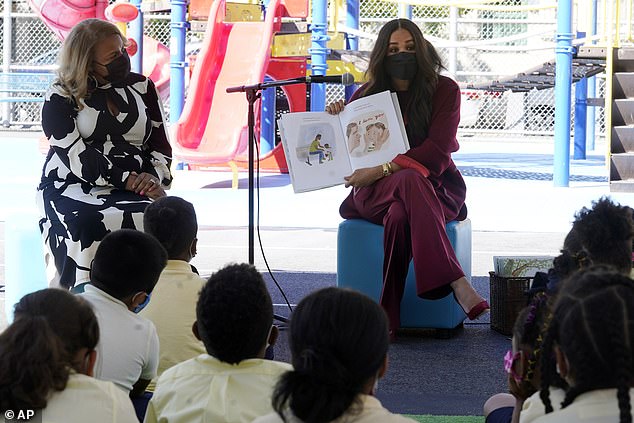 Meghan trotted around impoverished parts of Harlem where she read schoolkids extracts from her own book, The Bench

We were told this cringe-making display of self-aggrandizement was to ‘promote early literacy’ but as reviewers of this god-awful pile of bilge have attested, The Bench is to literacy what Madonna is to growing old gracefully.

It takes a special kind of brazen shamelessness to use children who can barely read to fire up your book’s flagging sales.

Just as it does to film yourself doing so, as Meghan and Harry reportedly did throughout their trip, to fulfil your massive multi-million-dollar contracts with paymasters like Netflix.

It also takes a special kind of brazen shamelessness to attack big pharma for being ‘ultra-rich’ and not doing enough to promote equality, when you are making yourselves ultra-rich by preaching about equality from your private jets and nine-bedroom, 16-bathroom mansion.

But my biggest concern about this New York trip though is not about the Sussexes’ shocking hypocrisy which happens with such regularity now that it’s lost all ability to surprise.

No, what worries me far more is the ongoing damage they are doing to the Royal Family and Monarchy with their very transparent attempt to establish an American-based renegade royal entity.

One that’s not based on the kind of quiet, admirable, stoic, modest, duty-led majesty of the Queen, but on a cheap, tacky, noisy, toxic, Kardashian-style 24/7 invasion of our senses that’s specifically intended to fleece royal status for maximum personal commercial benefit.

Meghan Markle’s incendiary but still-unproven claims of racism and callousness against the royals during her Oprah whineathon back in March have already caused very real harm to the Monarchy, especially in parts of the Commonwealth.

Now she and her hostage victim husband are striving to be a rival Royal Family that bestrides the globe like a woke colossus, and they’re being enabled in this delusion by the likes of New York mayor Bill de Blasio and the United Nations who treated them like world leaders in the past week. 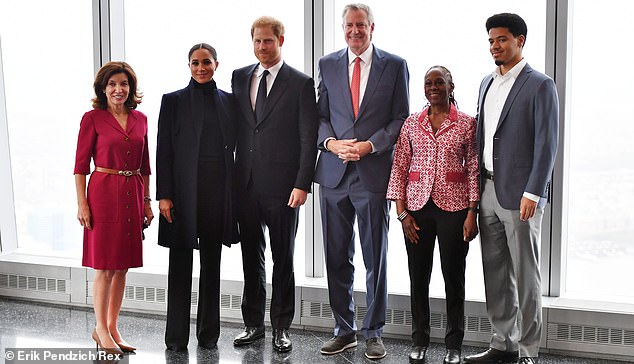 New York’s Mayor Bill de Blasio hasn’t found time to pay an important long overdue trip to Rikers prison but did find time to suck up to the Sussexes.

Governor Kathy Hochul took time out from her presumably busy schedule to join de Blasio for a photo PR op with the Sussexes at One World where they also met the UN Deputy Secretary General Amina Mohammed.

And the US Ambassador to the UN, Linda Thomas-Greenfield was so thrilled by rubbing shoulders with the royal couple that she excitedly posted pictures of them all on social media.

All of them were treating Meghan and Harry like world leaders.

They’re a retired actress and a retired Prince pretending to be world leaders so they can fill their royal boots with as much filthy lucre as possible before the penny finally drops to their gullible acolytes about what their real game is.

I see right through these ridiculous little chancers.

We need an urgent vaccine to protect us from these right royal hypocrites.

Yellowstone season 3 location: Where is Yellowstone filmed? Where’s it set?