Boris Johnson and Rishi Sunak are considering a U-turn over energy bills that would see VAT cut or scrapped to ease the pressure on hard-pressed families.

The Prime Minister has previously rejected the idea saying slashing the tax was a ‘blunt instrument’, but may be forced to act in the face of rising political pressure.

Labour is set to pile extra pressure on the Government over the rising cost of living by challenging MPs to back up past promises on cutting VAT.

In an opposition day debate in the Commons on Tuesday, the party will put forward a motion which, if passed, would force MPs to vote on the proposals. It could attract support from disaffected Tories unhappy at the increased burden.

A VAT cut and reductions in green levies designed to help boost eco-friendly power generation were also mentioned in a meeting between the PM and the chancellor, the Sun reported.

Meanwhile the oil and gas industry hit back against Labour demands for a windfall tax on profits as prices soar. in November BP boss Bernard Looney said that the company was ‘a cash machine at these types of prices’.

But today Oil and Gas UK said that the Treasury was already getting a tax revenue boost from the price rise.

Jenny Stanning, OGUK’s external relations director, said: ‘Our industry pays up to 40 per cent corporation tax on its profits – roughly double any other sector. That means that the UK Treasury is already gaining significantly from these price rises.

‘It is predicted to get an additional £3 billion in corporation taxes in the two years from last April – making a total of around £5 billion based on Treasury figures.’ 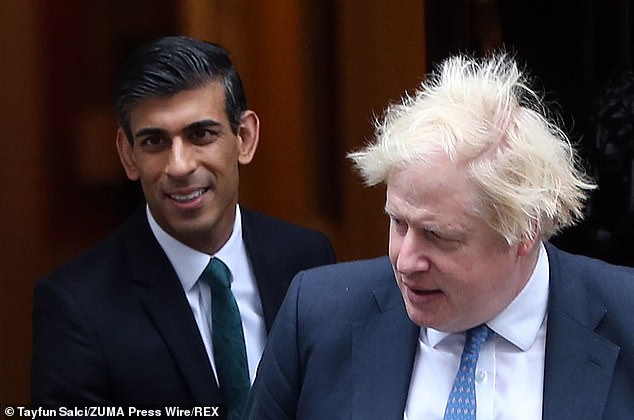 A VAT cut and reductions in green levies designed to help boost eco-friendly power generation were also mentioned in a meeting between the PM and the chancellor, the Sun reported. 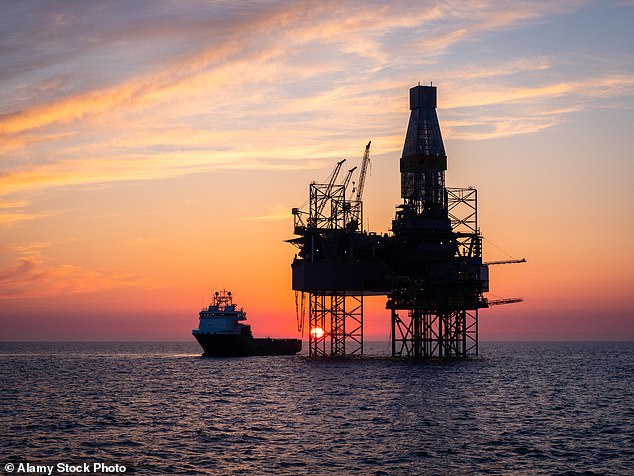 Meanwhile the oil and gas industry hit back against Labour demands for a windfall tax on profits as prices soar. in November BP boss Bernard Looney said that the company was ‘a cash machine at these types of prices’.

Labour has proposed slashing VAT on energy bills for a year, alongside a windfall tax on the North Sea oil and gas industry, to help support those struggling as energy prices rise.

But the Government has so far resisted making moves on VAT, and Education Secretary Nadhim Zahawi said oil and gas companies were ‘already struggling’.

However Labour says the industry was expected to report a near-record income in 2021/22.

They pointed to previous pledges made by members of the Government on VAT on energy bills, including Prime Minister Boris Johnson and Levelling Up Secretary Michael Gove.

Writing in The Sun in 2016 they said that leaving the EU would allow the UK to scrap VAT on energy bills, calling it ‘unfair’.

If backed, Labour’s binding motion would guarantee time in the Commons for a Bill on cutting VAT.

The party said this could come into effect alongside expanding the Warm Homes Discount to 9.3 million people.

Last night it was revealed Downing Street is considering an emergency loan scheme for energy firms to stave off a major increase in bills, it was claimed last night.

The Chancellor was said to be in ‘listening mode’, speaking to groups of MPs about their concerns over the large rise in power bills expected when the price cap lifts in April.

He also held talks with Boris Johnson on Sunday night as pressure mounted on the Government to protect families from rises expected to run to hundreds of pounds.

No 10 officials are said to be considering an ’emergency credit facility’ for firms to help them avoid putting up bills. But there is concern that smaller companies may not be able to take on such credit risk.

Experts predict that rising wholesale prices will lead to a 50 per cent increase in energy bills in April.

Last night Labour urged Mr Johnson and fellow Brexiteer Michael Gove to stick to their 2016 pledge that leaving the EU would let the UK scrap the 5 per cent VAT on domestic energy bills, saving almost £90 on average bills next year. 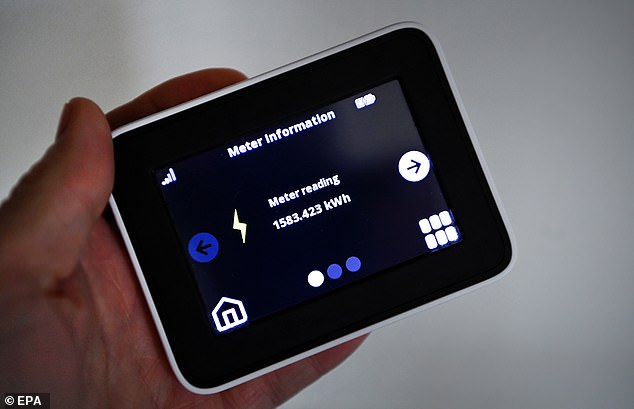 But ministers are believed to be cool on the idea as it would help everyone equally and not do enough to reduce the bills of the lowest paid.

Mr Sunak is set to hold more meetings with Tory MPs over the coming days to discuss cost of living issues.

One MP said: ‘The Chancellor was in full listening mode. He said we’ll see something well before the April price rises… but there was a need to ensure all the consequences were thought through.’

Asked about power price rises yesterday, Mr Johnson said: ‘I’ve been meeting the Chancellor constantly. I understand the pressures that people are facing.

‘This is the result of global price spikes as a result of the economy coming back from Covid.

‘We’ve got to help people, particularly people on low incomes.’

A government source said: ‘We are looking at a range of different things worth exploring, but we are not anywhere near making a decision.

‘It’s not like the Covid pandemic where a decision has to be made yesterday. There is time – and it is important to get this right.’

The Prime Minister is expected to hold further talks with Mr Sunak and Business Secretary Kwasi Kwarteng this week.

Conservative MP Stephen McPartland told the BBC the Government should introduce ‘credit facilities’ to help energy firms cope with volatile prices. He said this would let firms draw on financial reserves as an alternative to increasing bills. The BBC said Downing Street was looking at the idea. 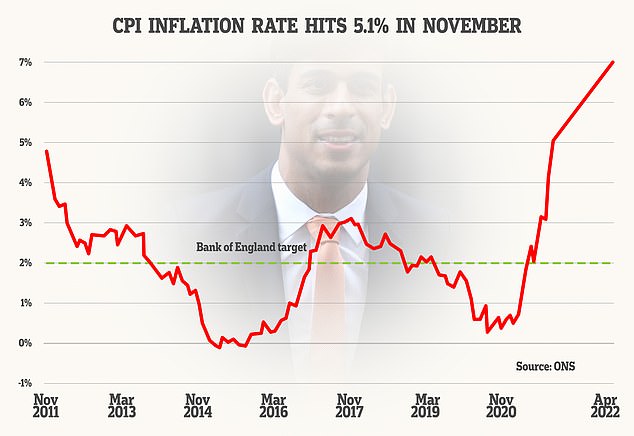 Backbenchers have warned the Chancellor the 1.25 per cent national insurance rise coming into force in April would worsen the pressures on family finances

Labour has proposed slashing VAT on energy bills for a year, alongside a windfall tax on the North Sea oil and gas industry, to help support those struggling.

Today the party will put forward a Commons motion which, if passed, would guarantee parliamentary time for a Bill on cutting VAT.

The party said this could come into effect alongside its plan to expand the £140 Warm Homes Discount to 9.3million people. Labour leader Sir Keir Starmer told his MPs last night: ‘It is Labour that is making all the running, offering ideas and solutions.

‘Meanwhile, what do the Tories offer hard-pressed families? Nothing. Yesterday Nadhim Zahawi [Education Secretary] was on the radio pleading poverty on behalf of oil companies instead of focusing on the worries of ordinary families.’

Boris Johnson has said he and Rishi Sunak are ‘looking at what we can do’ to cushion the blow of predicted increases of 50 per cent in power bills. Here are ten ways they could help:

Labour wants the 5 per cent VAT on domestic energy bills axed, saving families around £90 next year on average. Ministers are cool on the approach, but it has not been ruled out.

Tory backbenchers have demanded the temporary removal of a green levy that accounts for 13 per cent of the cost of energy bills but ministers say it is a key part of Government policy.

Profits of North Sea oil and gas firms are taxed at 30 per cent corporation tax plus a 10 per cent supplementary charge. Labour wants this put up to 50 per cent to raise at least £1.2billion.

2.2million households get the £140 Warm Homes Discount on energy bills. Ministers are understood to be looking at some form of extension. Labour wants to extend eligibility so 9.3million households receive it.

Some pensioners get £25 if temperatures drop to or below freezing for seven days. This could be increased, along with the winter fuel payment.

PUT UP BENEFITS IN GENERAL

Energy firms are calling for a loan to spread costs associated with company failures – estimated at £94 per customer – over a longer billing period.

The Treasury is considering industry proposals for a much larger £20billion loan scheme to help defer all elements of the price rises.

Jacob Rees-Mogg is said to have called for a 1.25 per cent National Insurance hike to be delayed.

Labour has urged ministers to set up a £600million fund to support energy-intensive firms that are particularly hit by increased bills.

This Is What Black Love Sounds Like According to PJ

Greatest Showman: Reimagined release date: When is album coming out?

Explainer: What is contact tracing and how can it help fight the new coronavirus?