Police are this morning in a battle to shut down an illegal rave in a well-known beauty spot after a ‘large’ number of lockdown revellers gathered last night.

Officers say it will likely take ‘some time’ to disperse the unlicensed party, which took place overnight in the Forest of Dean in Gloucestershire.

People are being advised to avoid the beauty spot, one of the surviving ancient woodlands of England, while police attempt to disperse revellers.

Gloucestershire Constabulary said in a tweet: ‘Police are currently in the Forest of Dean near to Speculation Car Park dispersing a rave.

‘People are advised not to attend the area due to safety and Covid risks.’ 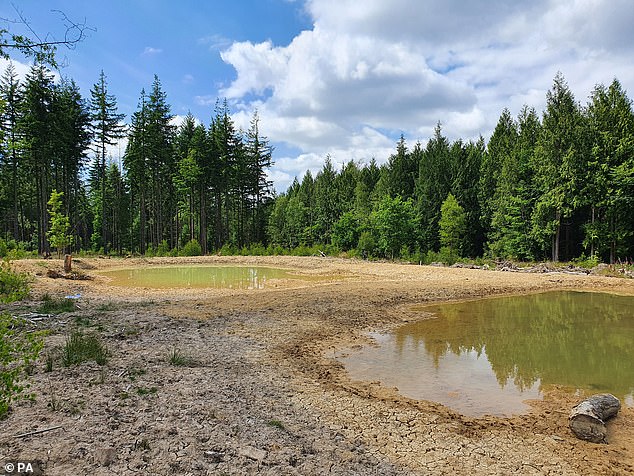 Officers say it will likely take ‘some time’ to disperse the unlicensed party, which took place overnight in the Forest of Dean in Gloucestershire

They added it would ‘likely take some time’ to resolve the incident.

A Gloucestershire Constabulary spokesman said the operation had been ‘relatively successful’ and was ‘coming to a close’.

No arrests have yet been made, though details of any arrests are expected to be released later today.

Gatherings of more than 30 people are still banned in England under the government’s eased lockdown measures.

Unlicensed raves are illegal under the Entertainment (increased Penalties) Act, which was introduced in 1990.

The Forest of Dean rave follows a number of similar events since lockdown began.

Last month,  two men were arrested after two 15-year-old boys were stabbed in a rave in Westcliff, Essex. 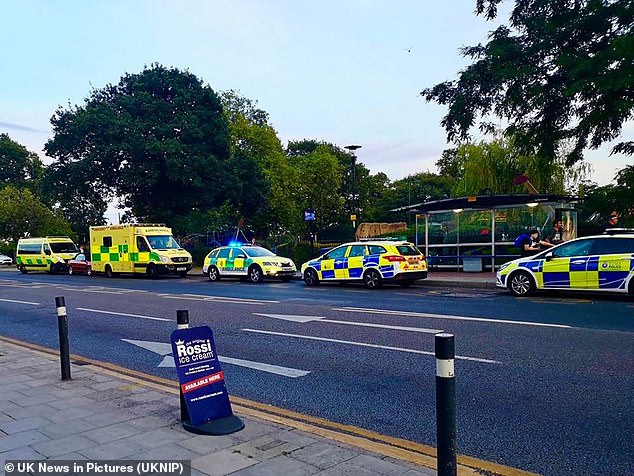 Essex Police were called at around 7pm yesterday to reports of a large group of people fighting, including some with weapons, in Chalkwell Esplanade near Chalkwell train station 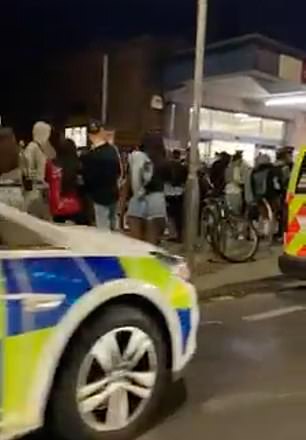 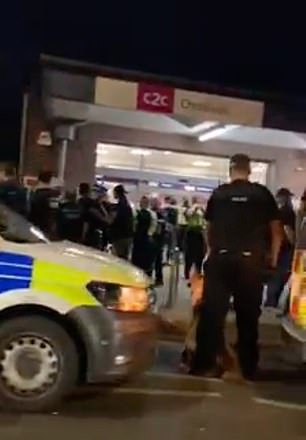 One of the 15-year-olds was injured in the head and leg while the other was stabbed in the arm. Their injuries are categorised as non-life threatening

Police officers were left running for safety from aggressive crowds who pelted them with bottles in south London during an illegal rave in June.

Shocking body-cam footage released by the Metropolitan Police last month showed members of the force fleeing for cover after angry yobs began to fire bottles and other objects at them during an illegal rave at an estate in Brixton on June 25.

The scenes, which left 22 officers injured and saw police vehicles smashed, come after figures released by the police revealed around 530 illegal raves have been organised across London in the past month.

Yesterday police closed off a car park to a beauty spot in Greater Manchester after reports of someone planning a ‘large event’.

Officers restricted access to a car park in Sale Water Park, near Sale, due to the gathering.

Though Greater Manchester Police did not give details of the event, reports on social media suggest it may have been a dog meet-up, report the Manchester Evening News.

A post on GMP Trafford South Facebook page said: ‘Police have temporarily closed the car park at Sale Water Park due to someone planning a large event. Please avoid the area.’

TV highlights for Friday, May 18

‘Bullying Bercow’ would fly into rages, thump table and call staff names, ex official reveals as he stands by complaint