Are the police giving up too? Officers have issued 841 fines since lockdown was eased despite handing out 600 in one day over the Easter weekend

Police in England have issued just 841 fines for breaching lockdown since restrictions were eased, representing a dramatic reduction in the number of penalties.

There were 1,019 fixed penalty notices (FPNs) issued in England between May 12 and 25 – roughly one fifth of the 4,967 handed out during the previous fortnight – according to provisional data released by the National Police Chiefs’ Council (NPCC).

This figure is likely to be revised upwards as more fines are reported.

Earlier data showed this year’s sunny Easter weekend was a flashpoint for fines, with nearly 600 issued on the Saturday, April 11, and an additional 500 the next day.

Just 841 fines were handed out by forces in England since lockdown measures were eased on May 13, with the highest number, 178, during the latest period given the day before. 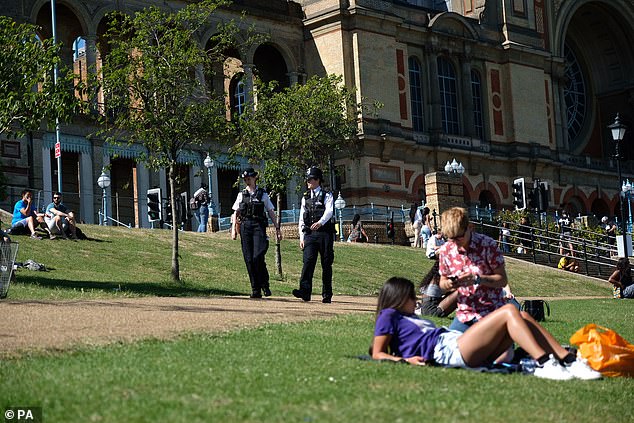 There were 1,019 fixed penalty notices (FPNs) issued in England between May 12 and 25 – roughly one fifth of the 4,967 handed out during the previous fortnight (pictured: Alexandra Palce, London, May 29)

HOW MANY LOCKDOWN FINES HAVE BEEN ISSUED IN YOUR AREA?

Here are the total number of fines issued by police forces in England between March 27 and May 25 for alleged breaches of the coronavirus lockdown laws:

Number of fines issued by police forces in Wales in the same timeframe:

The NPCC said penalties have been given to people for driving with others who are not members of their household, house parties, large gatherings and camping, since restrictions were relaxed.

NPCC chairman Martin Hewitt said: ‘As restrictions are carefully eased, the public have been able to go about their business in greater numbers, and with greater flexibility.

‘The collective public effort over the past two months has meant police officers have only rarely had to step in to enforce regulations and even less so in the past few weeks.

‘I am confident the vast majority will continue to act responsibly. We will be issuing guidance to officers on how to approach new changes to the regulations in the coming days.

‘The overarching aim of the police response has always been to keep people as safe as possible, and encourage them to follow the regulations, thereby reducing the transmission of the virus.

‘We will continue to play our part and are grateful for all of the positive engagement we have had with the public to date.’

Police were given powers to break up gatherings and fine people for breaching restriction of movement rules under the Health Protection Regulations 2020, from March 27.

The fines carried penalties of £60, reduced to £30 if paid within two weeks, with the fine doubled for each repeat offence up to a £960 maximum.

Friday’s figures are the first to be released since the row about Dominic Cummings’ 260-mile drive to Durham with his wife and four-year-old son, and their trip to Barnard Castle.

Previous updates had been given as part of a briefing, with journalists allowed to ask senior officers questions.

Of the 43 regional police forces in England and Wales, the Metropolitan Police have recorded the highest number of fines, with 1,035, followed by North Yorkshire, with 1,032, and Devon and Cornwall, with 906.

Warwickshire has issued the fewest, with just 40.

Durham Constabulary, which concluded the Prime Minister’s chief adviser may have committed ‘a minor breach’ of lockdown rules, but will face no further action, have handed out a total of 155 fines.

The NPCC said most penalties have been given to young men, aged between 18 and 24, with more issued on weekends and during warm weather.

It comes ahead of a further easing of lockdown restrictions on Monday, with those in England allowed to gather in groups of six in parks or private gardens.

But Downing Street said police do not have the power to enter gardens to check numbers.

The Prime Minister’s official spokesman said: ‘Under the coronavirus regulations police do not have the power to enter a home.

‘They have the power to enter a home separately if they believe serious criminality is taking place, but in terms of the regulations it does not allow them to enter private properties.

‘I’m sure that members of the public will show common sense and will want to abide by the rules, police will have the power to enforce the regulations using the proportional and pragmatic approach they’ve taken so far.’

Welcome To The Delightfully Chaotic World Of Run BTS