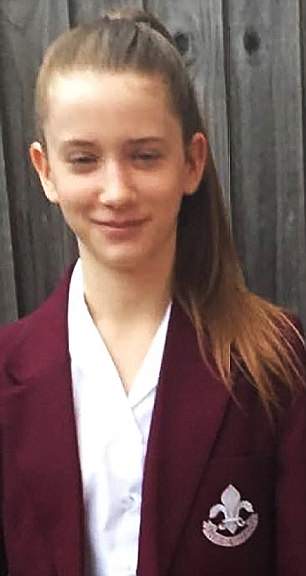 Chloe McGrory (pictured in her school uniform) was last seen in her home town of Watford, Hertfordshire at around 5.15pm on Thursday

The search is on for a 13-year-old schoolgirl who hasn’t been seen since yesterday afternoon.

Chloe McGrory was last seen in her home town of Watford, Hertfordshire at around 5.15pm on Thursday.

After she failed to come home last night her family alerted police who launched a search and public appeal for help.

She is described as being around 5ft 4ins tall and of slim build.

She has long dark hair and was last seen wearing her school uniform – a tartan maroon skirt with maroon blazer, black tights and white Adidas trainers.

Officers and Chloe’s family are growing increasingly concerned for her welfare.

Friends and family have taken to social media to express their concern.

Her cousin wrote: ‘Please share to help find my cousin.

If you have seen Chloe since she was reported missing or have information about where she has been, please call Hertfordshire Constabulary’s non-emergency number 101.

If you believe you are with her now or have seen her in the last few moments, please call 999 immediately.

Gray wolf which walked more than 8,000 miles to find a mate is dead