Police officer, 29, sent his friends CCTV footage of him taking a suspect to the ground and laughed as one claimed the prisoner ‘looked a complete p***k’ but keeps his job

A disgraced police officer who filmed himself tackling a suspect to the ground before circulating the clip on WhatsApp has been allowed to keep his job.

PC James Younas, 29, boasted of his take-down to colleagues and friends and laughed when one described the arrested man as a ‘a complete p***k.

The Northumbria Police officer used his iPhone to record the CCTV footage of the arrest from Wallsend, Newcastle-upon-Tyne, which he claimed he needed to write the incident report.

But a misconduct probe found PC Younas had shared the video for his ‘own entertainment’ and said he was ‘showing off’. 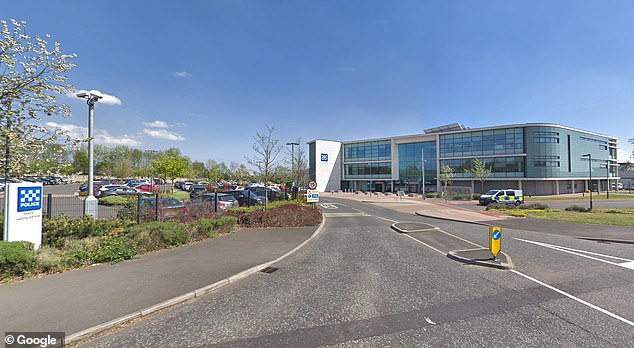 The Northumbria Police officer (Wallsent HQ pictured) used his iPhone to record the CCTV footage of the arrest from Wallsend, Newcastle-upon-Tyne, which he claimed he needed to write the incident report

Over the course of 10 days, he sent the video to four people, including citizen Neil McNally to whom he said: ‘Don’t show anyone ha’.

Mr McNally replied: ‘I won’t – brought him down well there ha! He looked a complete p***k.’

However the officer has avoided the sack and will continue his already decade-long stint in the force.

Barrister Steven Reed said: ‘It shows you are proud of what you are doing, that you are boasting. You see this as a joke.’

Although PC Younas apologised at the hearing, he insisted he had shared the footage with Mr McNally because he was interested in pursuing a career with the police.

But this excuse was dismissed by Mr Reed, who said: ‘Your messages don’t show any recruitment process – instead you are showing off to a friend.

‘You enjoy the attention given to you by Mr McNally.’

In a plea to keep his job, PC Younas told investigators: [Becoming a police officer] always something I’ve wanted to do since I was a young child.’

PC Younas is the latest in a string of Northumbria Police officers to retain their positions despite becoming embroiled in scandal.

Last month, Sgt Claire Hunter kept her job despite calling a suspect who died on her watch a ‘nasty smelly drunk’.

And PC Katie Barratt won her job back after branding takeaway staff ‘p***s’, although the force is appealing the panel’s decision to reinstate her.

Supt Sav Patsalos, head of Professional Standards at Northumbria Police, said: ‘We expect officers and staff to maintain the highest standards at all times and if anyone is found to have fallen below these we are committed to taking appropriate action.

‘On Wednesday, the panel of an independently-chaired misconduct hearing has concluded an officer breached the Standards of Professional Behaviour and that it amounted to gross misconduct.

‘The panel determined he should receive a final written warning.

‘I would like to reassure the public that we have taken positive measures to reinforce the responsibilities of all officers and staff around confidentiality.’

Mary J. Blige Says She Will Never Take Care Of Another Man