Revealed: Police officer who punched drinker who ‘swore at him’ outside pub Tasered pregnant woman who later suffered miscarriage

The police officer filmed punching a drinker who ‘swore at him’ has been revealed as the same man who previously Tasered a pregnant woman – who went on to miscarry.

Campaigners have called for ‘bully’ officer PC Matthew Hughes to be sacked after he was caught on camera appearing to punch and kick Stephen Dawe, 42.

And last June PC Hughes Tasered Leanne Perrett, 35, when he intervened in a domestic bust-up between her and her boyfriend, it has now emerged.

Perrett was three months pregnant but suffered a miscarriage after she was hit by the high-powered stun gun in a busy street, a court heard last year when the pair admitted assaulting an emergency worker.

More recently Mr Dawe was pepper sprayed in the eyes and taken to the ground after allegedly calling an officer a ‘d***head’ in a pub.

South Wales Police say he was arrested after allegedly being drunk and disorderly and abusing the officers. 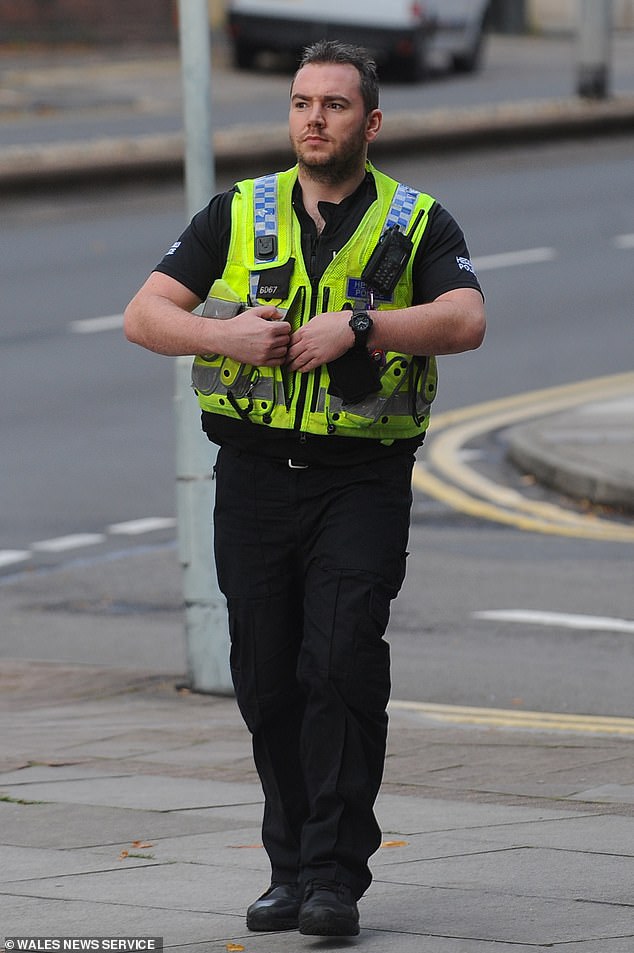 Campaigners have called for ‘bully’ officer PC Matthew Hughes (pictured) to be sacked after he was caught on camera appearing to punch and kick Stephen Dawe, 42

At court District Judge Shoman Khan told Perrett and her boyfriend Kyle Butts the police officer had been right to use his Taser. He said: ‘The officer’s reaction was instinctive, it was a heated situation and I thought he dealt with it very well.’

PC Hughes stepped in when Perrett and her partner Kyle Butts, 34, were seen arguing in the street, and fired the Taser while trying to control them.

Speaking outside court at the time, Perrett said: ‘I suffered a miscarriage after it happened. I was three months pregnant and I lost the baby. I know that’s what caused it.’

Perrett said the Taser should not have been used to break up the row. She said: ‘The first thing I remember was waking up and being pushed into the back of the police van. The copper’s reaction was completely over the top, he was well out of order. He had no need to Taser me.’

A spokesman for South Wales Police said: ‘Suffering a miscarriage is an extremely traumatic experience and our sympathies are with anyone who loses a child in this way.

‘The court recognised there was no medical evidence that this incident was the cause of the miscarriage. The Taser footage was reviewed by South Wales Police with no issues identified.

‘We hope the sentence ordered by the court, along with the drug treatment programme, provide the necessary support.’

Perrett, also of Llantwit Major, was handed a 16-week suspended sentence and ordered to do a thinking skills programme. 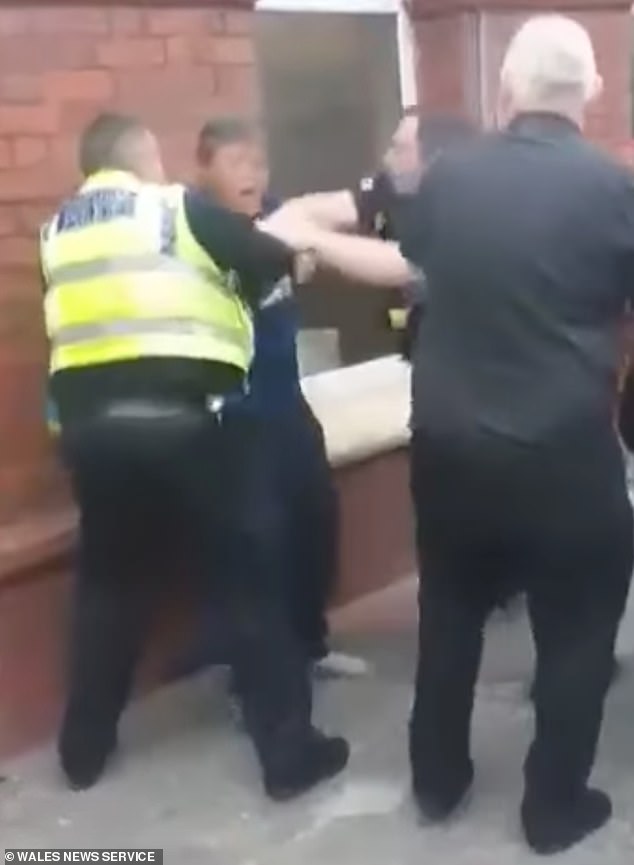 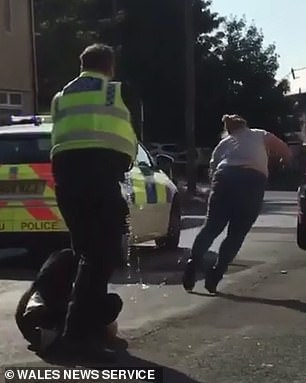 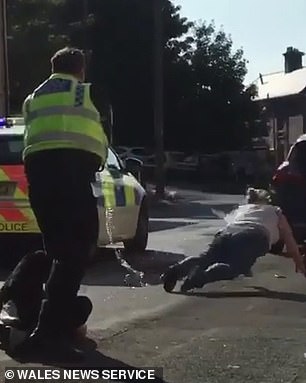 Last June PC Hughes Tasered Leanne Perrett, 35, when he intervened in a domestic bust-up between her and her boyfriend, it has now emerged 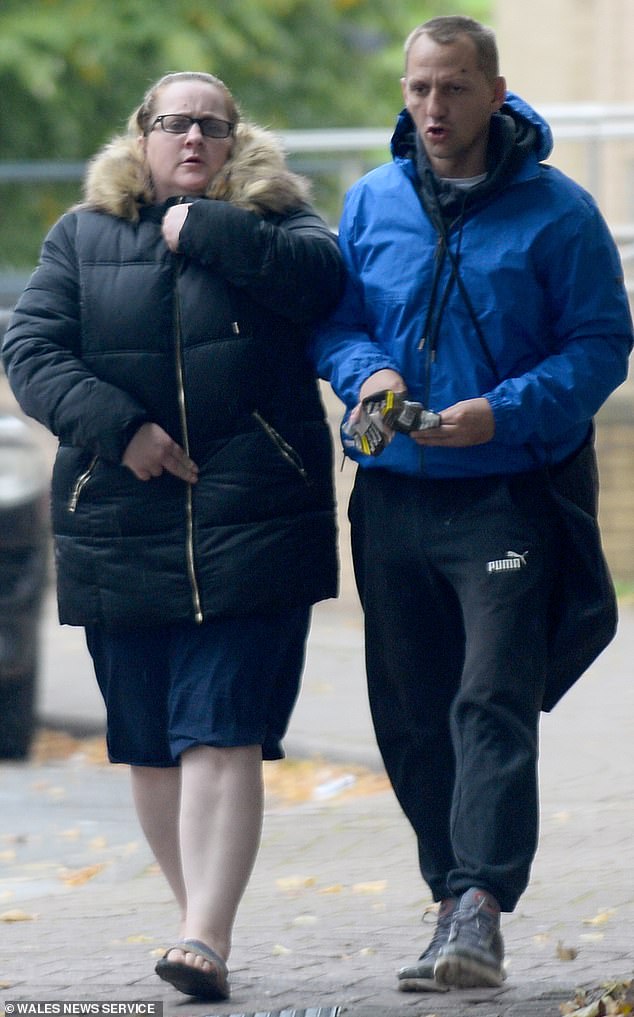 Ms Perrett was three months pregnant when an officer fired his stun gun at her during a the row between her and her partner Kyle Butts (pictured) in Barry, South Wales

Mr Dawe’s family have complained to the Independent Office for Police Conduct about PC Hughes’ behaviour.

Mr Dawe’s daughter, who asked not to be named, claimed: ‘My dad said hello to them and they ignored him, so he called them out.

‘Next thing he knew they’d grabbed him and taken him outside. My six-year-old brother and 10-year-old sister were also there and are traumatised by what they saw.

‘I shot the video and watching it back makes me feel sick to my stomach. Our family is definitely going to be taking this further.’

In a statement, South Wales Police said officers attended the Tadcross Hotel as part of an unrelated matter before arresting Mr Dawe.

A spokesman said: ‘While at the premises a man became abusive and aggressive and, as a result, PAVA – an incapacitant spray – was discharged.

‘A 42-year-old man was arrested on suspicion of being drunk and disorderly and assaulting a police officer by spitting. He has been released on conditional bail pending further enquiries.

‘We are aware of footage being circulated on social media and the matter is being considered by the force’s Professional Standards Department.’

What is Harvey Price’s disability Prader-Willi Syndrome? – The Sun