A Venezuelan opposition lawmaker almost stripped down naked, showing just his briefs, during an emotional debate in front of the country’s National Assembly on Tuesday.

Gilber Caro, a member of the hardline opposition party Popular Will, called for unity and the support of Juan Requesens, 29, an opposition leader who was accused and jailed for allegedly having a role in an assassination attempt on President Nicolas Maduro on August 4 during a military celebration.

Caro hailed Requesens as ‘a brilliant young man. A young man who gave it his all in the streets.’

‘It’s the moment. I call for unity in this institution so that we can defend it the way Requesens was out in the street defending the institution and Venezuela’s liberty,’ he said. 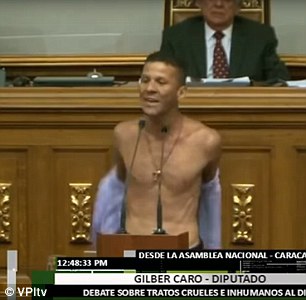 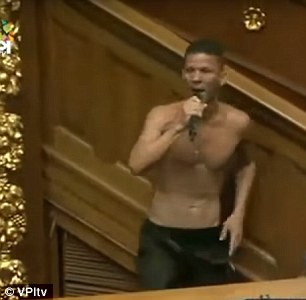 Gilber Caro, an opposition lawmaker in Venezuela’s National Assembly, undressed himself down to his underpants during a debate on Tuesday

Moments later, Caro, 43, removed his sports coat as he questioned everyone in attendance, ‘where does a man’s dignity rest?,’ before tearing his dress shirt off and walking to the other side of the chamber.

The politician momentarily paused to take his pants off and then blamed the president’s administration of stripping its citizens basic rights to food and medicine.

He himself spent 17 months imprisoned after Maduro accused him of carrying out terror attacks in 2016 before he regained his freedom in June.

‘A man’s dignity and love is not carried inside what I just finished removing,’ Caro yelled. ‘The dignity is in the heart and we carry Venezuela in the heart, [too].’ 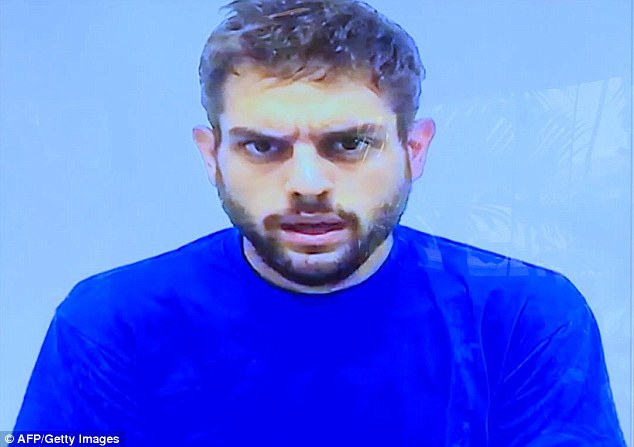 Hours after Caro’s emotional tirade, a court in Caracas kept Requesens detained along with two other high-ranking military officials, whose exact roles in the alleged assassination plot weren’t revealed.

Requesens, 29, has been charged with seven counts, including, terrorism, illegal possession of firearms and explosives, treason and attempted homicide.

The government steadfastly claims that opposition factions conspired with assailants in Miami and Bogota, although they have not shown any supporting evidence.

Three days after the two drones exploded in Caracas, intelligence agents rushed Requesens’ home  and apprehended him along his sister, Rafaela Requesens, a student leader.

Authorities say they have arrested 14 people as they carry out a manhunt for 34 other alleged conspirators, including exiled opposition leader, Julio Borges, the former head of the South American nation’s opposition-controlled National Assembly, who is now living in Colombia with his family.

Last Friday, officials released a videotaped statement from Requesens of having a role in an assassination attempt on President Nicolas Maduro. 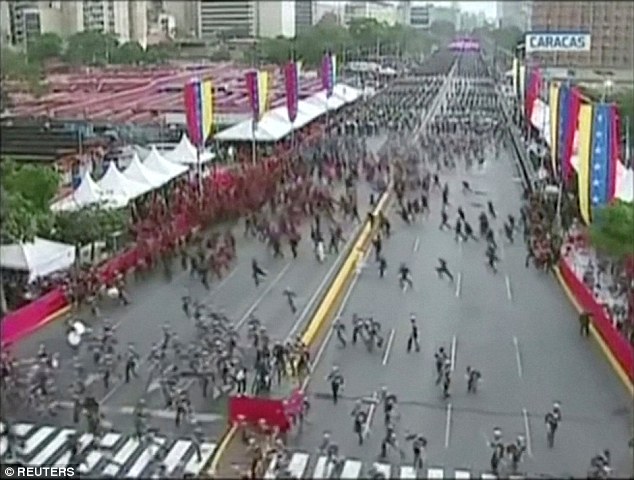 The country’s current social, political and economical climate has caused millions of Venezuelan’s to flee to neighboring Latin American countries, especially those that surround their borders.

Ecuador’s Ministry of Foreign Affairs estimated last week that close to 4,000 Venezuelans are seeking entrance across its borders on an average day.

Before Colombian President Juan Manuel Santos stepped down from office on August 2, his government awarded temporary residency to a sea of 440,000 Venezuelans that had crossed the border due to the on-going crisis.

The One Show issues apology as viewers in uproar over blunder You had one job!

Wowcher is slashing 77 percent off charcoal BBQs in big sale

Dwayne Johnson Is 'Very Proud' of Daughter Simone for Signing with WWE: It 'Blows My Mind'