Tel Aviv:  US Secretary of State Mike Pompeo has amplified the  Trump administration's rhetoric against Iran and gave warm boosts of support to Israel and Saudi Arabia in their stand-offs with Tehran.

Pompeo's comments in Riyadh and then Tel Aviv came as he neared the end of the Middle East leg of his first trip abroad as America's top diplomat. He has called for concerted international action to punish Iran for its missile programs and other actions that he said destabilise the region. 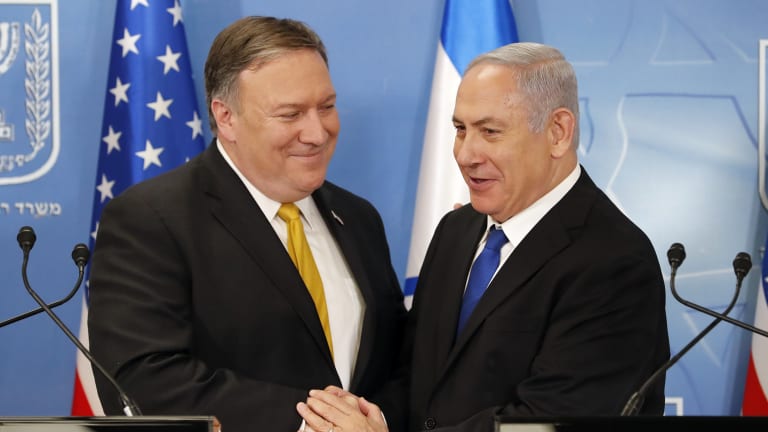 US Secretary of State Mike Pompeo. left. is greeted by Israeli Prime Minister Benjamin Netanyahu in Tel Aviv, on Sunday.

The tough line was welcomed by his hosts, particularly in Israel, which considers Iran its greatest threat and has led calls for the West to revise or reject the 2015 nuclear deal with Iran.

"We remain deeply concerned about Iran's dangerous escalation of threats to Israel and the region and Iran's ambition to dominate the Middle East remains," Pompeo said after a nearly two-hour meeting with Israeli Prime Minister Benjamin Netanyahu. "The United States is with Israel in this fight."

It also has complained the nuclear deal does not do enough to prevent Iran from developing a nuclear-weapons capability, and expressed concerns about Iran's involvement in the civil war in neighbouring Syria. Israel says it will not allow Iran to establish a permanent military presence in Syria, fearing the Iranians use it to launch attacks. 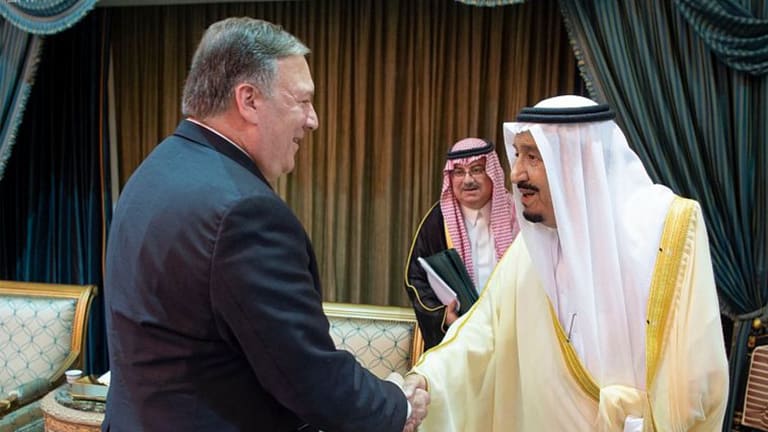 President Donald Trump is to decide by May 12 whether to keep the US in the nuclear deal. Pompeo repeated the Trump position that "if we can't fix it, he is going to withdraw."

Saudi Foreign Minister Adel al-Jubeir said the kingdom "supports the policy of the Trump administration against Iran and to improve the terms of the nuclear agreement with Iran."

Netanyahu also welcomed the US recognition of Jerusalem as Israel's capital and the scheduled move of its embassy from Tel Aviv on May 14. Pompeo said the U.S. is "incredibly proud" of that upcoming move.

The Palestinians claim Israeli-annexed east Jerusalem as their capital. They have criticised the US move and all but cut off ties with the White House.

Pompeo had no meetings planned with any Palestinian official and it was not immediately clear whether there had been any outreach to the Palestinians about his trip, which was to end in Jordan.

In Riyadh, Pompeo said Iran "destabilises this entire region" and he also urged the Saudis and their neighbours to resolve a festering dispute with Qatar. US officials say Iran is exploiting it to boost its influence in the region, including in Yemen and Syria.

Pompeo met with Saudi King Salman, whose country, along with Bahrain, Egypt and the United Arab Emirates, is embroiled in a row with Qatar that had undermined Gulf Arab unity and frustrated the US as it seeks to blunt growing Iranian assertiveness.

"I think they would all agree that it's in everyone's best interests that the Gulf states all figure out how to be together," Pompeo told reporters as he travelled to Israel. "We've got a common challenge in Iran I think they all recognise that. We're hopeful that they will in their own way figure out their dispute between them."

The ex-CIA chief had arrived in the kingdom a day earlier, shortly after Iranian-backed Houthi rebels in Yemen fired missiles at Saudi Arabia's southern city of Jizan, killing one person and underscoring what US officials said is a growing threat emanating from Iran.

Pompeo's meetings in Saudi Arabia and Israel, to be followed by discussions in Jordan, come just weeks ahead of several key dates that could bring further volatility to the region.

Trump is facing heavy pressure from European and other parties to stick to the Iran nuclear deal.

British Prime Minister Theresa May's office said she discussed the agreement with her French and German counterparts and they believe it should remain intact, even while addressing shortcomings.

Trump's new national security adviser John Bolton, a hard-liner like Pompeo on Iran, suggested Trump was unlikely to stay in.

"He certainly said very negative things about the deal, which implied that these other steps wouldn't really address that concern, but, look, it's possible in the discussions with our European allies that we'll be able to see some possibility there," Bolton told "Fox News Sunday."

Also hanging over the trip is the uncertainty about Trump's policy on Syria, which has shifted between a speedy all-out withdrawal of American forces and leaving a lasting footprint to deter Iran from completing a land bridge from Tehran to Beirut.

Speculative bet or inflation hedge? Bitcoin in the coronavirus crisis