Portland businesses and a church picked up the pieces Saturday morning between nights of unrest in the city following a number of police shootings nationwide.

Groups of around 100 people moved around the streets of Portland, either protesting or looking to cause damage on Friday night, leading police to declare a riot.

The mayhem marked the third night in five days that police have declared a riot in the city in the wake of police shootings nationwide, including those claiming the lives of Adam Toledo, 13, in Chicago, and Daunte Wright, 20, in Brooklyn Center, Minnesota. 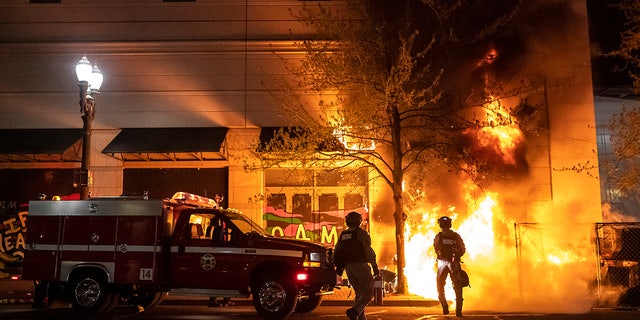 Portland Police and fire crews respond to a structure fire, set by protesters following the police shooting of a homeless man on April 17, 2021 in Portland, Oregon. (Photo by Nathan Howard/Getty Images)

Police also shot a man in Lents Park in southeast Portland on Friday morning. The victim, a White man in his 30s who has not been identified, died at the scene.

By Saturday morning, local residents were left to sort through the aftermath: At First Christ Church on Southwest Park Avenue, parishioners put up plywood to cover the damaged windows, KGW 8 reported.

“Sometimes when windows are broken in a riot, it’s not a specific statement by one individual,” lead pastor Cynthia McBride said, as she sought to uphold the church’s message of love and unity. “It’s more people who seem to be caught up in the angst of the moment.”

The church had been damaged once before in the past year. A police report noted that the church is “a location known for their generosity in feeding over a thousand meals weekly to the homeless.” 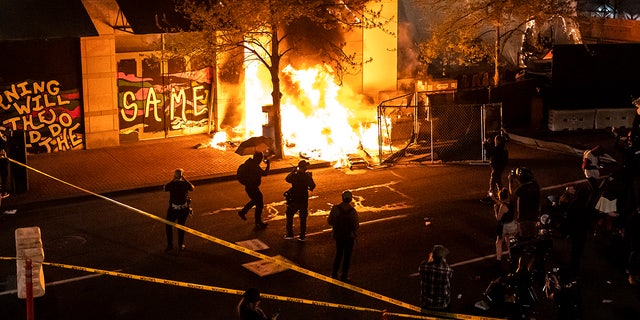 McBride expressed her frustration that the church has to foot the cost of repairs again after already struggling financially due to the pandemic – money that might otherwise go toward fulfilling the church’s mission.

The Oregon Historical Society felt the same burden, with windows also smashed for the second time this year.

“It is depressing on so many levels,” museum director Kerry Tymchuk said. “We invested in windows that were impenetrable so they weren’t able to get in as they did last time and throw flares in to the building or steal things, which they did last time.”

A police report stated that a group of “an estimated several hundred people” started marching after 9:30 p.m. and smashed windows of several businesses, including Nordstrom, Verizon, Nike and more.

The protests resumed Saturday night, this time with demonstrators putting pressure on the police by gathering outside the east precinct building.

ALMOST HALF OF FEDERAL CASES AGAINST PORTLAND RIOTERS HAVE BEEN DISMISSED

Protesters had moved dumpsters into the streets before police finally declared an unlawful assembly and moved to break up the protest, KATU reported.

Police gave the group a chance to disperse on its own, warning that any individuals who remained could face crowd control munitions, arrest or citation.

Andy Ngô of The Post Millennial shared protected tweets from an individual – allegedly a part of an Antifa group – who urged fellow protesters to hide their “bloc,” which could serve as evidence of their activity.

“Antifa are telling their comrades to discard of evidence if they were involved in the arson attacks last night in downtown Portland,” Ngô tweeted. “Fires were set near propane tanks.”

“Bloc” refers to the gear – called black bloc – that is used to conceal a person’s identity, including ski masks, scarves, sunglasses, helmets and other face-protecting items.

The initial tweet advised protesters that it was “better to spend $50 on new bloc than prison time.”

What Every Guy Should Know About Laser Hair Removal