THE gloves were off, even before the sparring began.

Donald Trump brought UFC welterweight Colby Covington to watch his TV debate with Joe Biden – and the grappler would have been proud of what he saw. 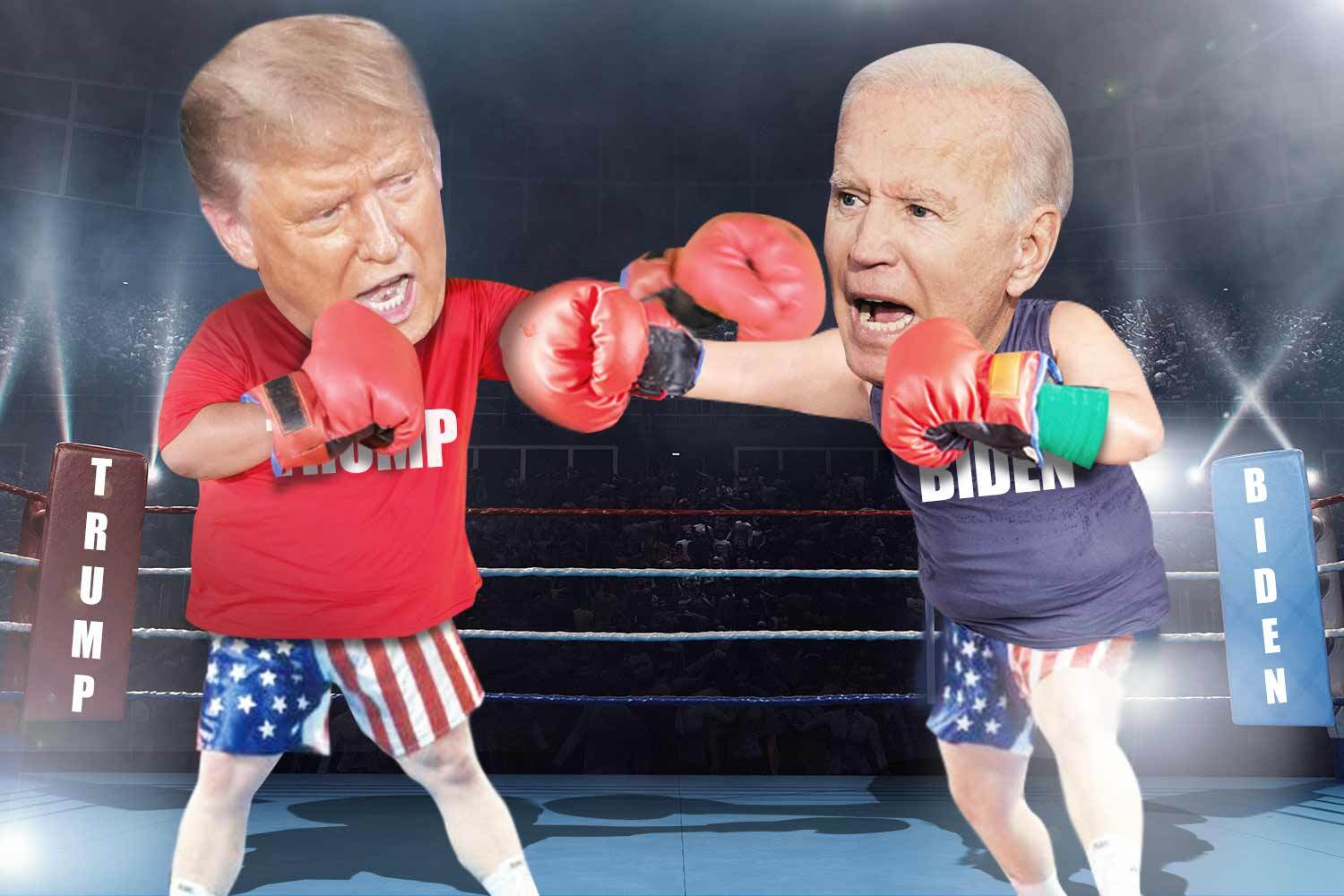 Brawling Trump turned the presidential prize-fight into a wrestle for the White House by launching a series of stinging blows.

The US President fought dirty – bringing up the cocaine addiction of Biden’s son, calling his rival dumb and refusing to condemn a right-wing hate group.

But did he emerge victorious? Snap polls seemed to give the contest to Biden – but Trump’s supporters said his combative style won the day.

Evangelical leader Ralph Reed said: “Trump proved again why he is the best counterpuncher in American politics. It's not always pretty, but it’s effective and it’s why Trump bested Biden.”

Millions of Americans had turned in for the first in a trilogy of debates between the Republican reigning champ and the Democrat contender.

Ever since John F Kennedy outshined Richard Nixon in 1960 – and claimed the White House – going one-on-one in a TV spectacle has been considered a crucial part of the presidential race.

The winner’s momentum carries them towards the November vote – while the loser is left with just weeks to turn things round. 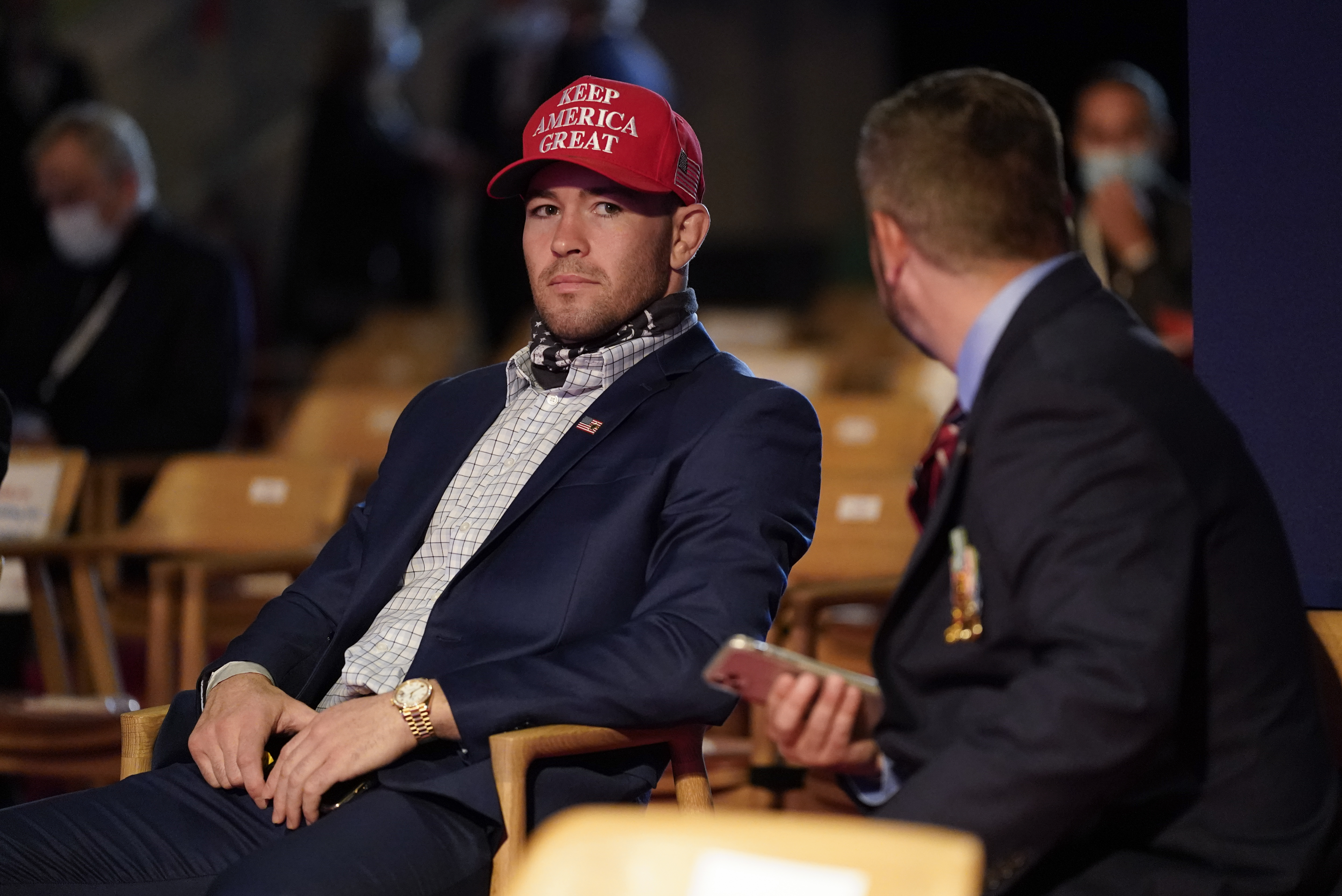 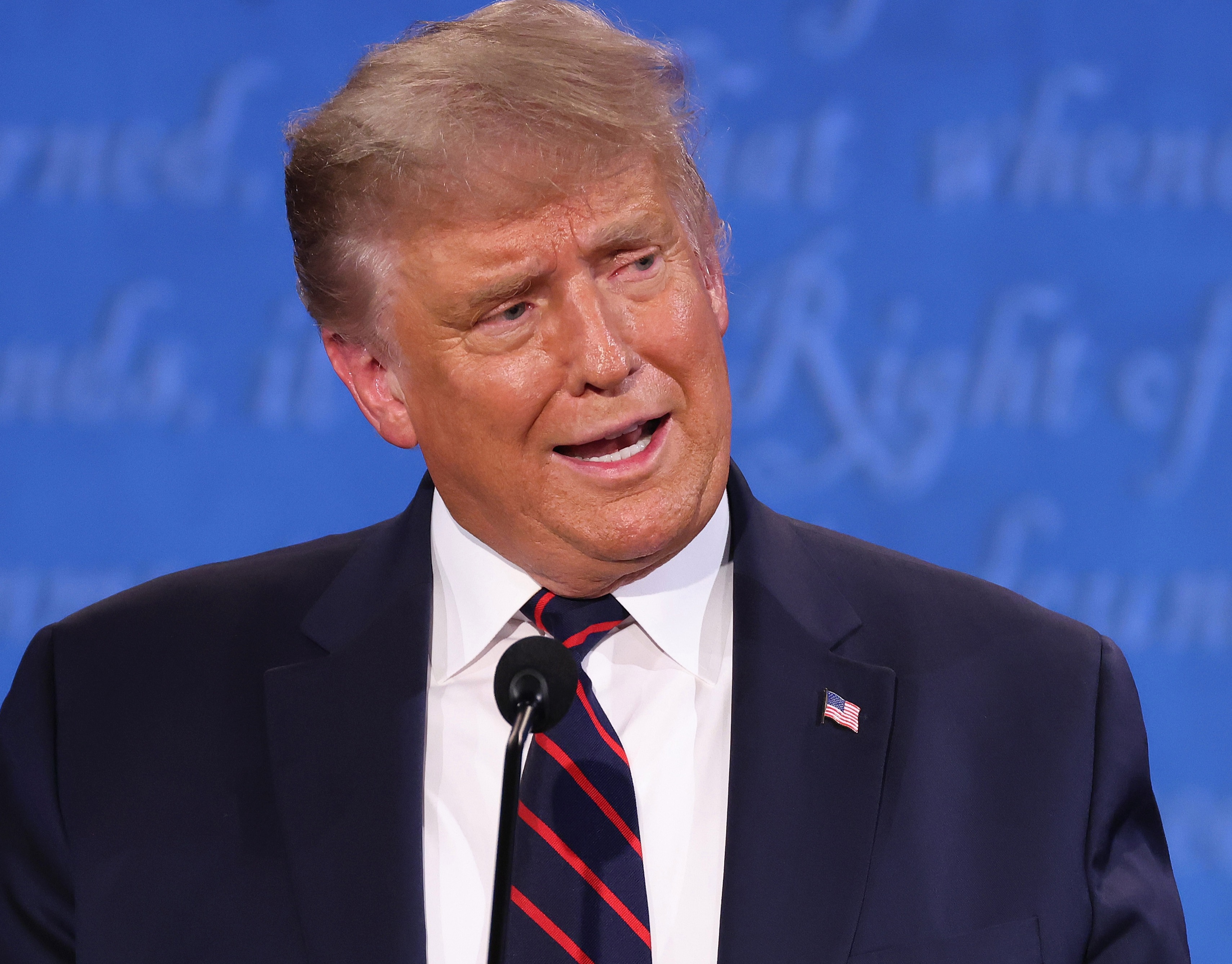 Trump and Biden’s opening 90-minute debate was fought over six bruising, 15-minute rounds, each on a different topic.

Before they stepped into the ring – a socially-distanced stage at Samson Pavilion in Cleveland, Ohio – Trump’s cornermen were mischievously trying to give their man an edge.

Unfounded rumours spread that Biden had refused to have a pre-match ‘ear inspection’ – hinting that he was being provided with a loop feeding him information.

Trump had also repeatedly chided him for failing to agree to a drug test.

Biden punched straight back – tweeting a photo of a pair of headphones and a tub of ice cream with the caption: “It’s debate night, so I’ve got my earpiece and performance enhancers ready.”

But as the debate got underway, Trump came out swinging – knowing he needed to impress the judges after slipping in the polls.

He claimed the middle of the ring and peppered Biden with jabs – declaring that his opponent was being controlled by radical left-wingers who would wreck America.

The president goaded: “They’re going to dominate you Joe, you know that.”

Later on in the round, seemingly unable to take anymore verbal pummeling, a bloodied Biden spat back: “Will you shut up, man?” 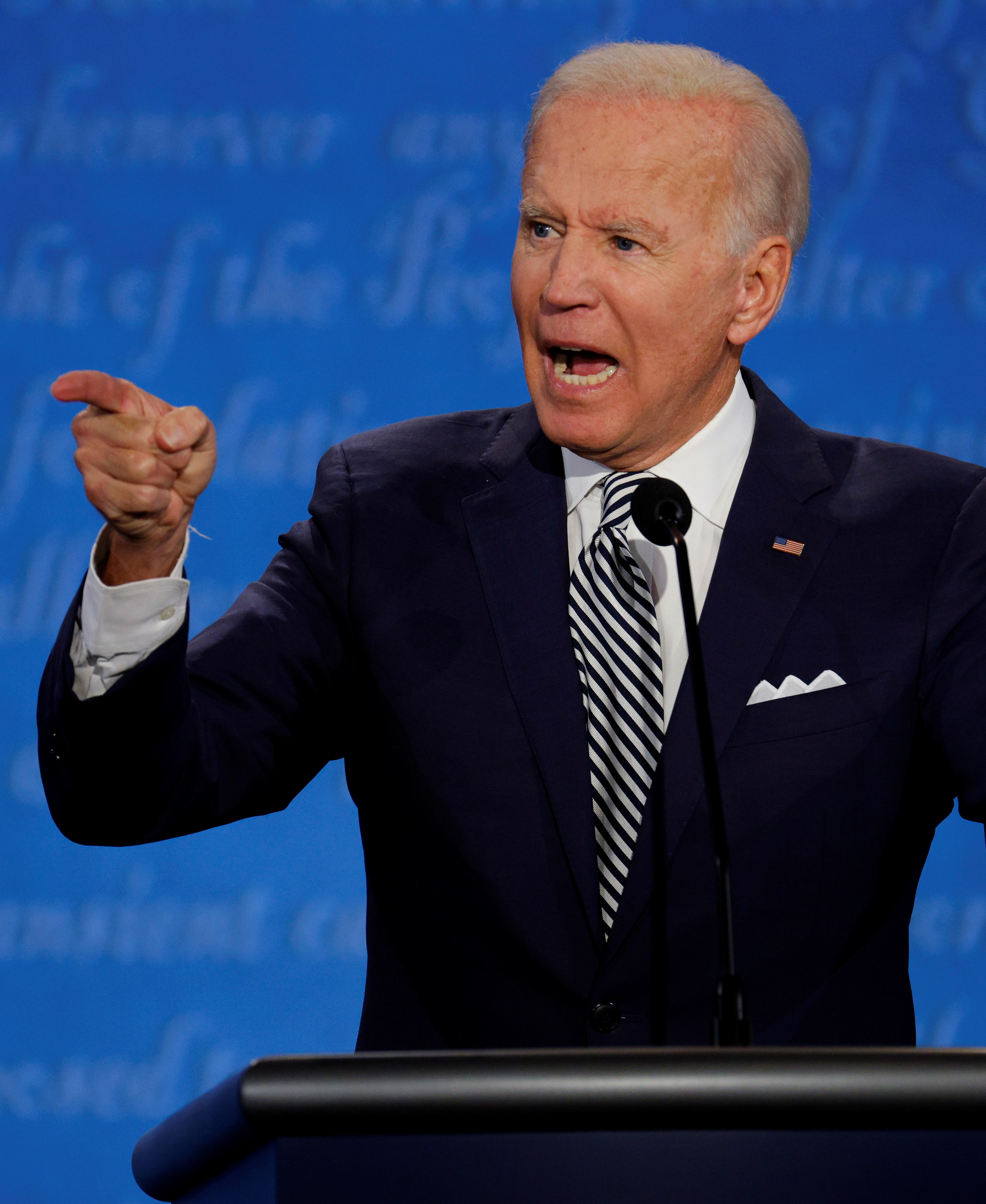 Trump even threatened to go after the ref – struggling debate moderator Chris Wallace – warning him: “I guess I'm debating you, not him, but that’s ok.”

Round one to Trump – the sprightly 74-year-old who had tons more energy than his 77-year-old opponent, a man he has repeatedly mocked as ‘Sleepy Joe’.

But Biden immediately pinned Trump to the ropes on the Covid-19 pandemic – which has killed 200,000 Americans – declaring: “This is the same man that told you by Easter it would be gone.”

He then unleashed a strong right-hand to the jaw, adding: “Maybe you could just inject some bleach in your arm and that would take care of it.”

Trump was rocked back by the zinger – which referenced his rambling claim that disinfectant could be used on patients to treat the deadly virus.

He replied: “That was said sarcastically and you know it.”

Trump attempted to counter – claiming that under a President Biden the death toll would have been two million and insisting that Obama’s former VP wanted to delay a vaccine.

He also jabbed at Biden’s insistence that he would not endanger the health of his voters by holding large rallies, quipping: “Because nobody will show up.”

On masks, Trump slung a left-hook and said: “I don't wear them like him. He could be speaking 200ft away from me and he’s wearing the biggest mask you've ever seen.”

But the judge’s scorecards were level.

In the middle rounds, Trump taunted Biden for being “bottom of his class” as they clashed in the centre of the ring over the economy.

The president continued to bob, weave – and interrupt – his rival at every opportunity, prompting Biden to dismiss him as a “clown”. 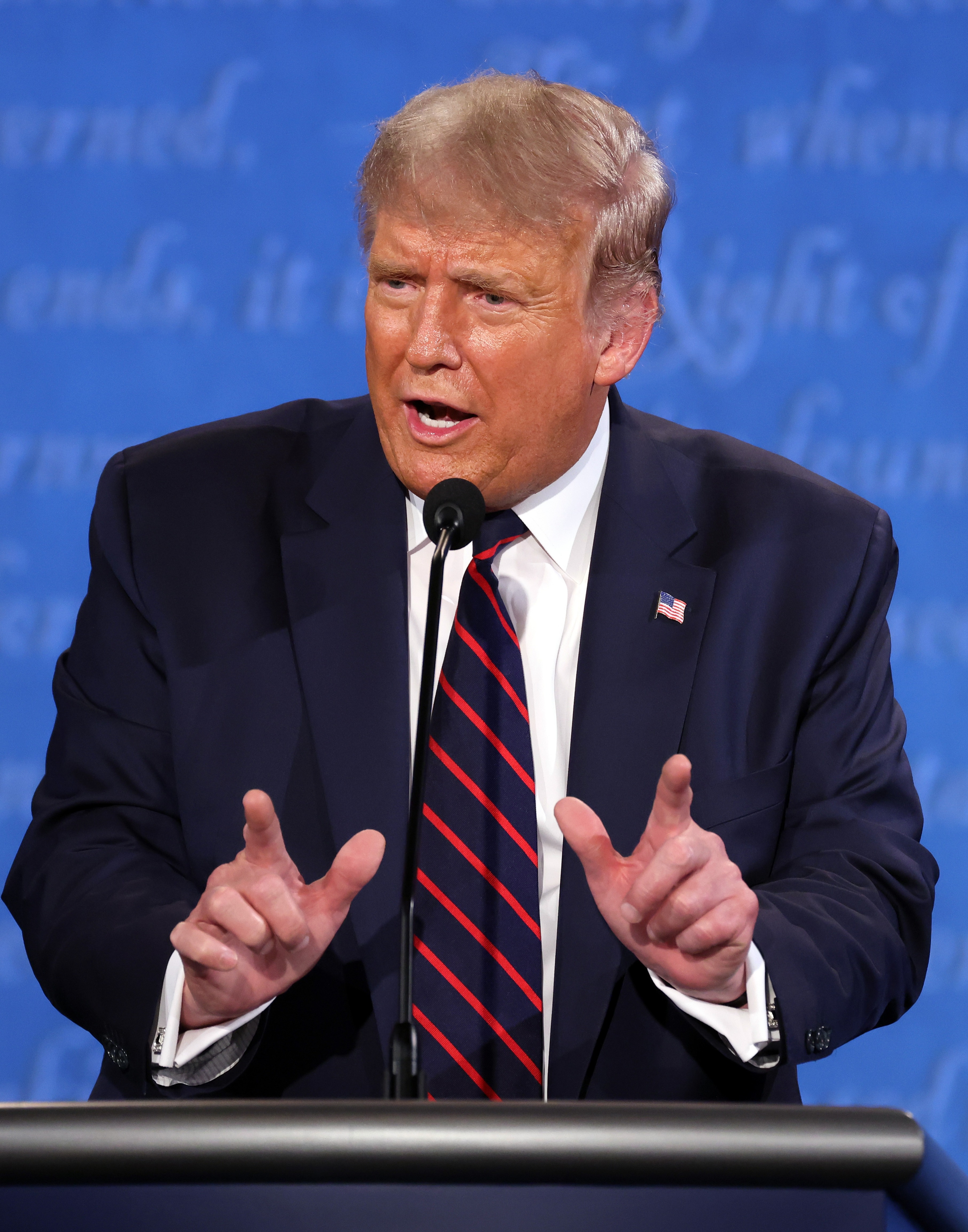 They ended up trading blows over Trump’s taxes and the influence of China – with ref Wallace repeatedly stepping in to separate them.

Trump, slamming one into the body, said: “This guy will close down the whole country and destroy our country.”

Biden countered: “He's done very little. He talks about the art of the deal – China perfected the art of the steal. We have a higher deficit now with China now than we did before.”

But it only encouraged a barrage of low blows from the president, who attacked Biden’s son Hunter over his financial ties to China and Russia.

He said: “China ate your lunch Joe and no wonder – your son goes in there and takes out billions of dollars.

“And also, while we’re at it, the mayor of Moscow’s wife gave your son $3.5million. What did he do to deserve it?”

Flinching Biden responded by insisting that “none of that is true” – but the damage was done.

The next round, on the racism crisis in the US, was a bruising encounter for Trump.

He refused to condemn the right-wing extremist organisation ‘Proud Boys’, instead opting to say: “Proud Boys stand back, stand by.”

The strange comment appeared to be a call to arms for the hate group.

Trump was also battered by Biden for his remarks that there were “many fine people on both sides” after a white supremacist rally in Charlottesville, Virginia, which left a woman dead.

“This man is the saviour of African Americans? This man has done virtually nothing.”

As the pair tired, they were involved in brief skirmishes on the environment before a blockbuster final round. 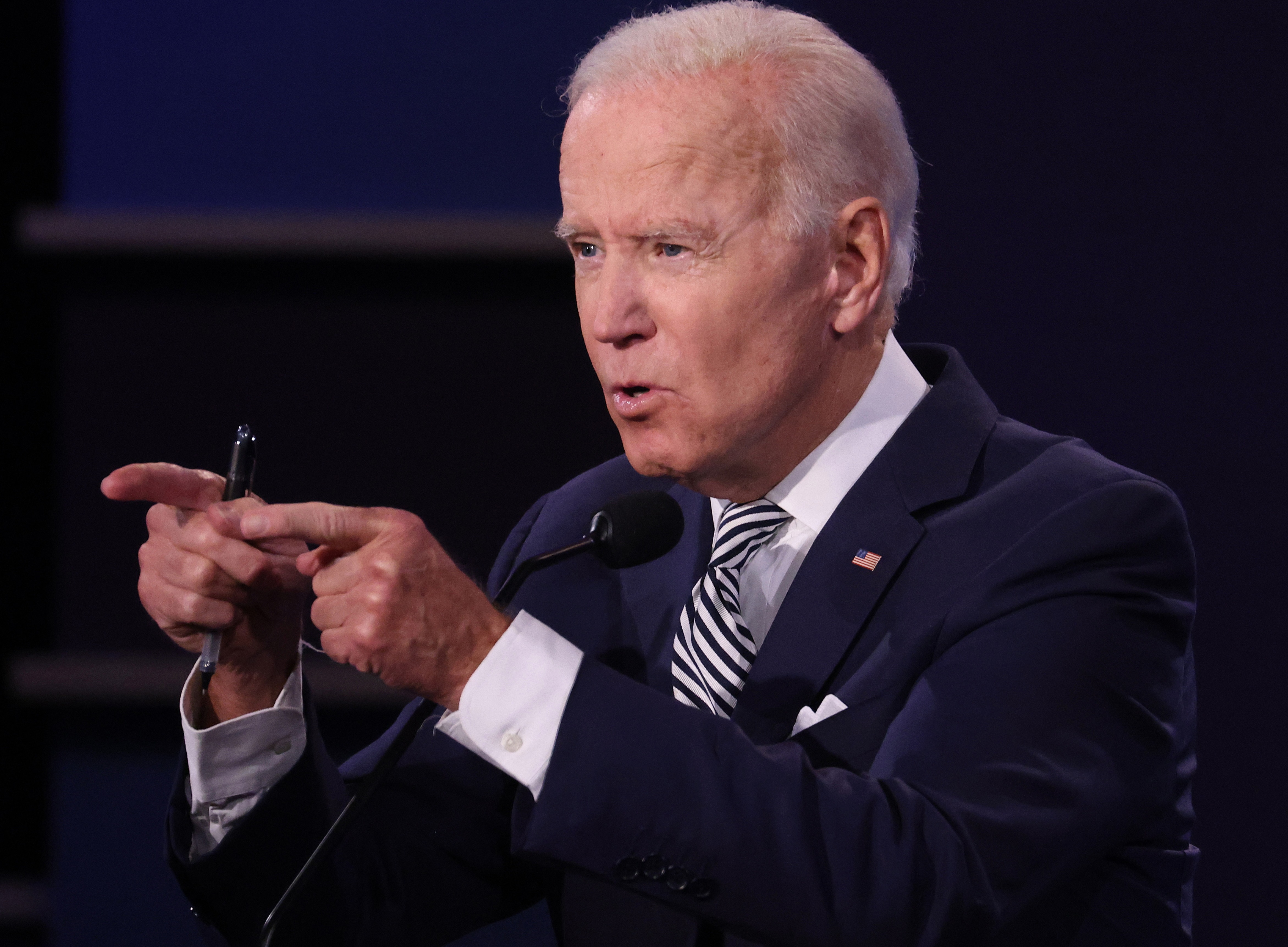 Biden came out strong, insisting that the US has become “weaker, sicker, poorer, more divided and more violent” under President Trump.

He added: “We left him a booming economy and he caused a recession. It is on his watch.”

Biden also criticised the president's reported mocking of fallen US troops as “losers” – bringing up his late son Beau, who served in Iraq before dying from brain cancer in 2015.

But Trump wound his arm up for one last huge hook – attacking Biden’s other son, Hunter, for his cocaine addiction.

Trump said: “I don’t know Beau – I know Hunter. Hunter was thrown out of the military.

“He was dishonourably discharged for cocaine use. And he didn’t have a job until you because Vice President.”

Biden, taking a standing eight-count, admitted: “My son had a drug problem. He’s overtaken it. He’s overcome it. I love him.”

It was a crushing blow.

But was it Joe Biden who was left wincing – or the American people?
The show will roll into Utah next week, for the second presidential debate between the two men.

'Married at First Sight': Mindy Shiben Was Shocked That Zach Justice Didn’t Even Do This With Her On Their Honeymoon

Huawei P40 Pro’s biggest problem may have just been solved