Kigali: Prince Charles has told Commonwealth countries considering becoming a republic that it is for them to decide, and that cutting cords with the British monarchy can be done calmly and without rancour.

Opening his first Commonwealth Heads of Government Meeting as head of the Commonwealth, in Kigali, Rwanda, Charles acknowledged growing republican movements in some member states.

These include countries in the Caribbean and more recently Australia, following the appointment of Matt Thistlethwaite as the first-ever assistant minister for the republic.

Charles did not single out any country: “I want to say clearly, as I have said before, that each member’s constitutional arrangement, as republic or monarchy, is purely a matter for each member country to decide”.

“The benefit of long life brings me the experience that arrangements such as these can change, calmly and without rancour,” the 73-year-old said. 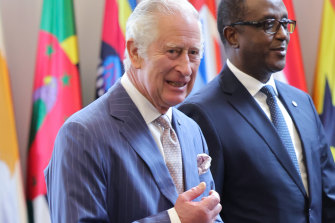 Prince Charles, arrives at the CHOGM opening ceremony in Kigali, Rwanda, on June 24, his first as Head of the Commonwealth.Credit:Getty Images

Barbados ditched the monarchy last year and Jamaica, which wants slavery reparations, has said it intends to follow suit.

Charles said that new ways to acknowledge the past wrongs of slavery were needed. “Frankly, this is a conversation whose time has come,” he said.

Whether a country opts for its own head of state has no bearing on its membership of the Commonwealth group of nations, which is expected to grow this year by admitting the former French colony Gabon to its ranks. Rwanda, a former German and Belgian colony, was admitted to the group in 2009.

Earlier British Prime Minister Boris Johnson hit back at critics, including Charles, of his Australia-style plan to deport asylum seekers to Rwanda, saying they should keep an open mind.

Johnson landed in Kigali with nothing but praise for the Rwandan President Paul Kagame who is accused of brutally repressing political opponents and operating a campaign of state-sponsored enforced disappearances. 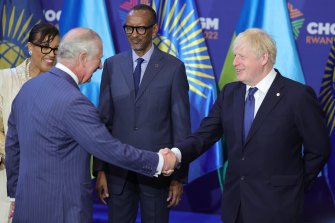 Critics have questioned Rwanda’s suitability to host the summit, as well as care for Britain’s unwanted asylum seekers, because of its human rights record.

Britain wants to mimic Australia’s offshoring solution to deal with unwanted asylum seekers who arrive by boat after crossing the English Channel.

Because the Channel is not in international waters, Britain cannot turn boats back (as Australia does) without cooperation from France. It has an obligation to rescue boats in distress.

So the UK asked the African nation to take the arrivals.

The first flight was barred by the European Court of Human Rights (ECHR), which is not connected to the European Union, but the UK is determined to press ahead and is proposing to rip up the Human Rights Act and replace it with a bill of rights that would prevent future ECHR injunctions.

Johnson urged his critics to study Rwanda’s economic record instead – poverty declined from 77 per cent in 2001 to 55 per cent in 2017.

“I’m delighted that Prince Charles and everybody are here today to see a country that has undergone a complete transformation, or a very substantial transformation,” he said.

“And if I’m seeing the prince tomorrow of course I’m going to make that point,” he said.

On Friday, after the meeting, Johnson told Reuters he would not disclose any conversation he had with heir-to-the-throne.

“But what I will say is as people come to Rwanda, like you have today, there are a lot of prejudices about Rwanda [that] need to be blown away,” he said.

Charles was reported to have called the UK’s plan to copy Australia’s offshore solution for asylum seekers who arrive by boat “appalling”.

Clarence House has not denied the report. The monarch is expected to be politically neutral.

Back in London, Johnson’s Conservative Party lost two parliamentary seats on Friday, prompting the resignation of the party’s chairman and renewing doubts about the future of Britain’s embattled leader, Reuters reported. The losses suggest the electoral coalition Johnson brought together at the 2019 national election may be fracturing. He has already survived a vote of no-confidence by Conservative MPs this month.

Charles and Johnson met for a “cup of tea” on Friday morning in Kigali.

Both Charles and Johnson have met Kagame in the Rwandan capital. Johnson praised Kagame’s “moral stance” on Ukraine, according to a spokesman. 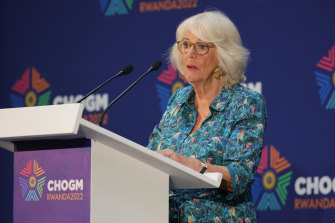 Camilla, Duchess of Cornwall and future Queen Consort, speaks at the Violence Against Women and Girls event in Kigali, Rwanda.Credit:Getty Images

In a speech at an anti-violence event, Charles’ wife Camilla, Duchess of Cornwall, highlighted Kagame’s commitment to improving conditions for women, noting that Rwanda was ranked seventh in the world in terms of women’s rights and opportunities.

“On International Women’s Day earlier this year, I was profoundly touched by President Kagame’s powerful message on social media, which read, ‘Equality is a right, not a favour’,” Camilla said.

“So let us bear His Excellency’s words in mind as we focus on violence in the home against women and girls today and remember that we are seeking rights, not favours.”

In his first address ahead of the official Commonwealth Heads of Government summit, Johnson likened the grouping, often maligned as a disparate and redundant relic of the British Empire, as a fertiliser.

“What if there was a miracle fertiliser, a fertiliser of business that grew your business that expanded your profits and cut your costs by 21 per cent?” he told the Commonwealth Business Forum.

“There is such a fertiliser and I’ll tell you [the] ingredients: it’s a common language; it’s a familiar sense of our legal and administrative systems; it’s a shared system of mutual trust between us and that system is called the Commonwealth.

“That fertiliser knocks 21 per cent off the cost of trade between Commonwealth members,” he said.

'The Unbearable Weight of Massive Talent': Neil Patrick Harris Was the Perfect Combo of Being 'Smarmy but Likable' as Nicolas Cage's Agent

Fargo Season 4 Will Start Airing Before Filming Is Finished

Instagram: How to stop strangers from video calling you