‘I’ve just killed my mum’: Private schoolboy, 17, who switched genders stabbed his mother 118 times before dialling 999 to tell police they should arrest him ‘and bring a body bag’, inquest hears

A private school pupil who switched genders strangled his mother and stabbed her 118 times before making a chilling 999 call to tell police ‘bring a body-bag’, an inquest heard today.

Rowan Thompson was visiting his mother Joanna Thompson and the pair had just returned for a morning jog when the 17 year old attacked her in her village home.

Mrs Thompson, 50, was strangled to unconsciousness in their living room by Thompson and ’10 or 15 minutes later’ he returned to brutally stab her 38 times to the forehead, 64 times to the neck, and 16 times to the arm.

At 12.45pm on July 1 last year, Thompson called 999 in a ‘calm, unemotional and quite ordinary manner’ and said ‘I’ve just killed my mum…. I strangled her and I’ve been stabbing her with various knives and whatnot’.

The police officer who arrested Thompson at the home in Hambledon, Hampshire, said the teenager was ‘extremely calm and composed’ and ‘seemed to be more concerned about his cat’.

In October, Thompson was found dead aged 18 while in custody at a secure mental health facility – just four days before he was due to stand trial accused of murdering his mother.

Today an inquest into the death of speech therapist Mrs Thompson heard Thompson had been visiting her for the weekend, having recently moved to live with his father, who is a magician, in Barnsley, South Yorkshire.

It was heard Thompson and his mother had ‘stressful’ conversations about his living arrangements on the night before her death and he felt she was ‘controlling and over-bearing’.

Thompson, who became gender-less and changed his name from Ben, had previously been admitted to mental health hospitals following a suicide attempt and suffered depressive bouts.

He told police he felt ‘strange’ while returning from jogging with his mother, was on ‘auto-pilot’, and ‘could not remember anything’ until he arrived at the police station. 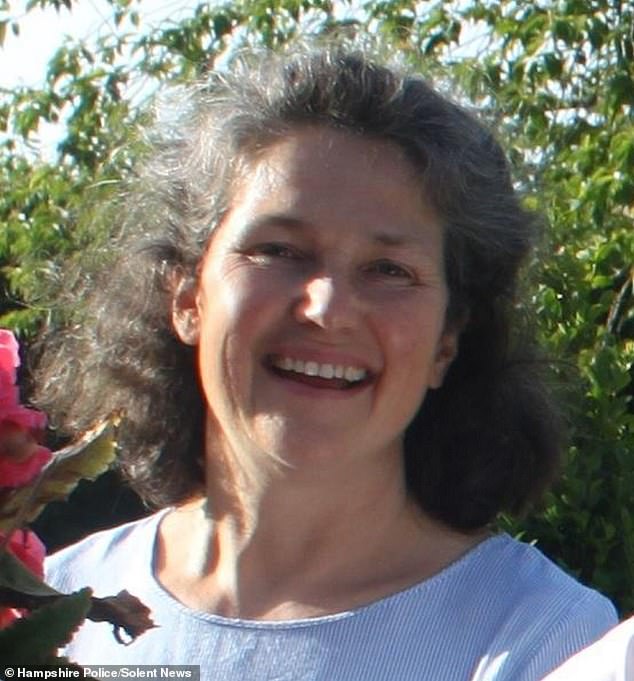 Rowan Thompson was visiting his mother Joanna Thompson and the pair had just returned for a morning jog when the 17 year old attacked her in her Hampshire home. Mrs Thompson, 50, was strangled to unconsciousness by Thompson and ’10 or 15 minutes later’ he returned to brutally stab her 38 times to the forehead, 64 times to the neck, and 16 times to the arm

Today a clip of his shocking 999 call to police was played at Winchester Coroner’s Court, in which he says he ‘made sure’ his mother was not breathing.

He said: ‘I’ve just killed my mum. I need someone to arrest me as that’s what you do and an ambulance would be nice.

‘I strangled her and I’ve been stabbing her with various knives and whatnot. My younger brother is at school, he’s due back later tonight.’

‘I started strangling her, she fell to the floor. I strangled her a bit more and stopped… then I kept my hands around her.

‘Then I started stabbing her and whatnot… She’s in the living room.’

He cheerfully added: ‘I’m down for the weekend, I had a meal and went to the cinema with my best friends which was really nice.’

He also told the 999 operator he ‘put the knives in the dishwasher just in case’ and after he was arrested on suspicion of murder, he told police ‘think it’s a bit more than suspicion’.

She said: ‘In the last couple of years Rowan was showing signs of being depressed and showing suicidal tendencies, he had to be admitted to hospital.

‘She found it difficult, he was seeing counsellors. He changed his name and gender.’

She added: ‘He was never hostile towards her but she talked about being on egg shells around him, he would get upset about things and she was never sure what would upset.’

However, she said her sister made ‘slightly strange comments in the weeks before her death’. 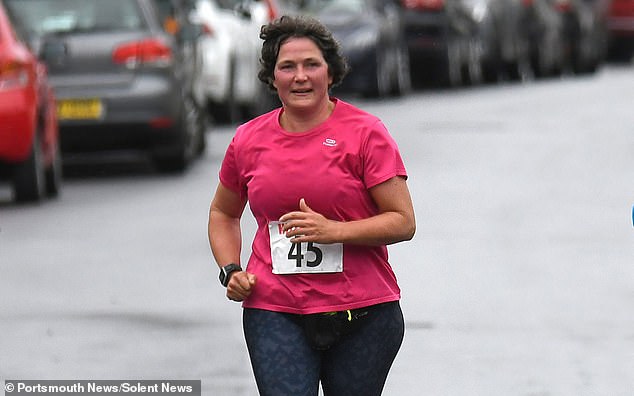 Today an inquest into the death of speech therapist Mrs Thompson heard Thompson had been visiting her for the weekend, having recently moved to live with his father in Barnsley, South Yorkshire. It was heard Thompson and his mother had ‘stressful’ conversations about his living arrangements on the night before her death and he felt she was ‘controlling and over-bearing’ 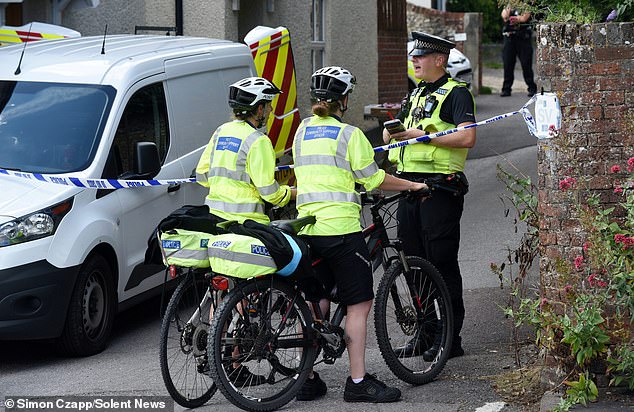 She said: ‘Jo told me if anything ever happens to her what she would like me to do with her son. I didn’t ask about it, I wish I had.’

Ms Rugge-Price also said: ‘When [police] said Rowan was being held it completely shocked me and I was really sad for Rowan. It was totally out of my imagination.’

Sarah Ritchie, Mrs Thompson’s friend, went running with the pair on the morning of her death and said Thompson was ‘quiet’, adding that a decision hadn’t been made about whether he was due to move back to Barnsley or stay in Hambledon.

She said Thompson tried to commit suicide in 2017 following the suicide of Mrs Thompson’s brother.

Pathologist Dr Basil Purdue said Mrs Thompson suffered a fractured neck and that 14 of her neck wounds caused ‘copious bleeding’ as they struck her jugular vein.

He concluded that although she was unconscious, her heart was still beating when Thompson stabbed her 118 times.

Dr John Sandford, a psychiatrist, said Thompson had minor autism but ‘there was nothing to suggest he was suffering from abnormal mental functioning’ when he killed his mother.

However, this was disputed by his father as two opposing psychiatrist reports, prepared by Thompson’s defence counsel in court, were not read out.

Mr Thompson said: ‘For [Dr Sandford’s] report to be read into the record as a standalone is very biased when there were two other professionals who had opposing views. They said he was mentally incapacitated at the time.’

Mr Pegg said: ‘It seems no one will ever know why [Thompson killed her]. The only person who knows is Rowan and he’s going to be unable to tell us.’

He also said: ‘The evidence I have heard seems to me to suggest that Jo never had any concerns about his conduct towards her, there was no history of hostility towards her.’

Mr Pegg also said: ‘Around 12.45pm on July 1 Rowan dialled 999. In that call he appears in a calm, unemotional and quite ordinary manner to tell the call handler exactly what he has done.

‘He said he made sure that she was not breathing.

‘Jo remained in a state of unconsciousness when Rowan took a knife and and stabbed his mother 118 times. The main focus of Rowan’s attention was him stabbing his mother’s neck.’

Thompson, who studied at the £16,000 a year Churcher’s College in Petersfield, was due to stand trial at Winchester Crown Court on October 7 this year, but was found dead at Prestwich Hospital, Greater Manchester, on October 3, prompting an investigation by authorities.

Police said the death was not suspicious.

Ms Rugge-Price described her sister as a ‘shy, gentle and kind’ mother who was ‘always thinking about others’ and was ‘devoted to both her sons’.

I'm a hot doctor but it wasn't always the case – if you looked at my school photos you'd be stunned, my glow up is 10/10 | The Sun

Helen Skelton discusses having a 'face like thunder' on Strictly

Spoilers: On edge Suki hides a secret in EastEnders