A Victorian coroner will refer two Melbourne doctors to the Australian Health Practitioner Regulation Agency after finding their actions, and those of a string of companies, contributed to the death of a mother who suffered an allergic reaction during a heart scan organised by her employer.

Coroner Simon McGregor said an inquest into the death of Peta Hickey, 43, had uncovered a testing regime and industry that put profit over patient care, calling for federal Health Minister Greg Hunt to undertake an audit of Australia’s radiology clinics.

“The snapshot provided by the inquest has revealed an industry putting profits over patients,” Mr McGregor said.

Ms Hickey, a business executive from Heidelberg Heights, attended a heart scan at the suggestion of her employer, Programmed Skilled Workforce Limited, on May 1, 2019.

The company had launched a testing regime for all senior staff after a colleague suffered a near-fatal cardiac arrest while on a work trip to Japan in 2018.

But the mother of two, who had no history of heart problems, had an anaphylactic reaction to contrast dye injected as part of the CT scan under the watch of Dr Gavin Tseng, and died in hospital eight days later. 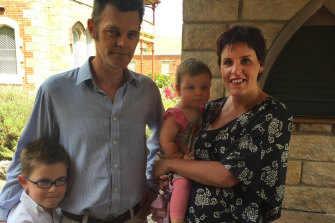 Peta Hickey (right) with her husband Richard and their children.

She had never met or spoken to the doctor, Doumit Saad, who signed her referral.

On Monday, coroner Simon McGregor called for EpiPens to be made available at testing sites and for a nationwide audit of all radiology clinics after finding there was a widespread acceptance of incomplete radiology referrals.

“Peta died as a result of substandard clinical judgment from doctors at the beginning and the end of the [heart check] program, combined with the misalignment of incentives amongst the various business entities that facilitated the process,” Mr McGregor said.

Outside the Coroners Court of Victoria, Ms Hickey’s husband, Richard Hickey, remembered his late wife as a beautiful, generous and warm person, and called on those who contributed to her death to apologise. 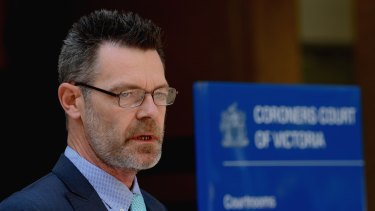 Richard Hickey speaks to the media outside the Coroners Court on Monday.Credit:Eddie Jim

“Right now Peta should be getting excited with our daughter Maggie as she prepares to start big school next year. She should be rehearsing lines with our son Max for his upcoming performance in the school musical. Instead, we prepare for those milestones and another Christmas without Peta,” Mr Hickey said.

“I have fought to find out the truth … so our kids … will, in time, be able to understand. But more importantly … so we can ensure this never happens to anyone else ever again.

“This has been a monumental effort, a determined family, up against corporate machines.”

The family are considering whether to launch legal action against the doctors and companies involved.

The hearing heard Ms Hickey was given an injection of contrast dye as part of the CT scan at Future Medical Imaging Group at Moonee Ponds after labour hire firm Programmed sought a corporate deal for heart scans for its executives.

Programmed used booking service Priority Care Health Solution to co-ordinate the program in early June 2018 after it learnt of and began referring staff to a combination heart and coronary test.

Priority then engaged Jobfit, which provides bulk medical assessments such as pre-employment fitness testing, to arrange the bookings, via MRI Now.

Ms Hickey, who had no history of heart issues, agreed to be tested and went along to FMIG with a signed referral from Dr Saad, who was employed by Jobfit and had been contracted to assist with reviewing the test results.

Soon after the dye was administered, Ms Hickey complained of dizziness and shortness of breath before losing consciousness.

The specialist radiologist who administered Ms Hickey’s contrast dye injection as part of her heart scan – Dr Tseng – later revealed he didn’t give her potentially life-saving adrenaline because he could not do two things at once.

A post-mortem examination of Ms Hickey later revealed a normal heart and coronary artery and no evidence to suggest a history of symptoms or signs relating to cardiovascular disease.

In handing down his findings, Mr McGregor said Ms Hickey was given “insufficient” medical treatment. 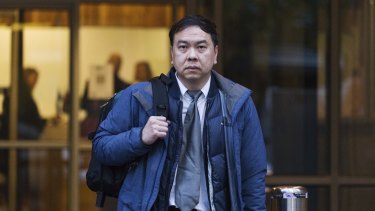 “Despite the fact the FMIG’s policies and procedures were substantially compliant … Peta’s defective referral was accepted and acted upon. Her subsequent anaphylactic relation to the contrast dye was poorly managed by Dr Tseng, and there was nothing the other radiology staff or the emergency services personnel could do to reverse the situation,” the coroner said.

“The conduct of Programmed, Priority, MRI Now and Drs Saad and Tseng causely contributed to Peta’s death. The conduct of Dr Saad and Dr Tseng departed from normal professional practices. The conduct of Priority appears to have been, as a matter of fact rather than any legal term of art, misleading and deceptive.”

Mr McGregor said he would now notify the Australian Health Practitioner Regulation Agency of the “insufficient and unsafe” actions of both Dr Saad and Dr Tseng.

He said Dr Saad authorised the compiling of referrals using his signature for patients he had not seen, failed to halt the testing program when he learnt his signature had been used, and failed to apply ethical standards, seeing people as clients or candidates rather than patients.

Mr McGregor said not only did Dr Tseng continue with Ms Hickey’s scan despite her invalid referral, he then undertook a CT scan in similar circumstances only days after Ms Hickey’s severe contrast reaction.

Maurice Blackburn medical negligence principal Kathryn Booth said this was a case of corner-cutting and of subjecting patients to a dangerous procedure without assessing them for risk factors.

“This was an entirely avoidable tragedy that has taken the life of Peta, a much-loved mother of two whose life was ahead of her. Everything that could have gone wrong in this case did go wrong,” Ms Booth said.