Criminal prosecutions in England and Wales plunged by almost 60% in three months as restrictions imposed to tackle the Covid-19 pandemic hit the justice system, figures suggest.

Both prosecutions and convictions were down 18% in the 12 months to June 2020, compared to the previous year, according to Ministry of Justice (MOJ) statistics.

The report published on Thursday, which is the first to contain a full quarter affected by the coronavirus pandemic, shows the impact on courts as restrictions on movement were imposed to tackle coronavirus towards the end of March. 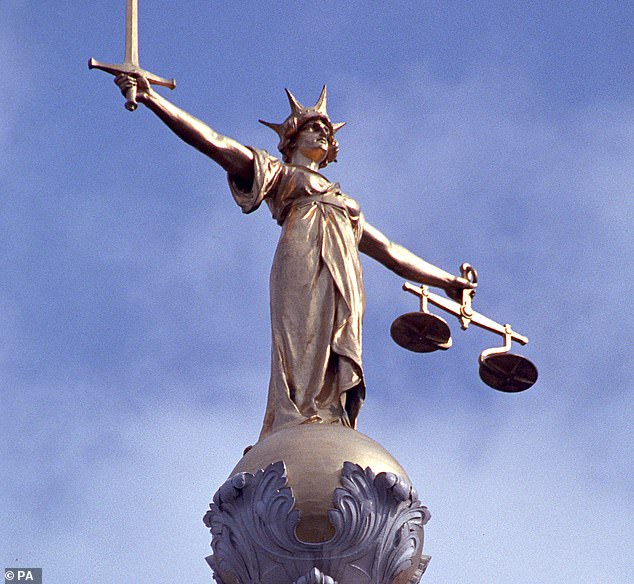 Criminal prosecutions have fallen by almost 60% since the start of the pandemic according to the latest figures from the Ministry of Justice (pictured: Central Criminal Court, Old Bailey)

There were similar drops in convictions and offenders sentenced, which plummeted by 59% and 58% respectively.

The figures also show the average custodial sentence hit its highest in a decade in the year to June – reaching 19.5 months, up two months from the previous year.

‘This increase continues the longer term upward trend over the last ten years and in the latest year may be partly influenced by the prioritisation of cases likely to result in custody in response to the Covid-19 pandemic restrictions on movement,’ the report said.

A total of 1.34 million people were dealt with by the criminal justice system in the year to June, down 15% on the previous 12 months.

The latest quarter saw a 49% drop from the previous three months.

The total number of offenders sentenced dropped 17% to 975,000 compared to the previous year, the data shows.

An MoJ spokesman said: ‘The situation has vastly improved since the period these figures cover – magistrates’ backlogs are now falling and the number of cases being resolved by the Crown Courts has trebled since April.

‘We’re spending £80 million on a range of measures to further drive this recovery, including hiring 1,600 additional staff and opening more Nightingale courts to boost capacity.’

Last month, it was reported the courts backlog which has worsened during the pandemic could quadruple by 2024 without action according to a study by a crime and justice consultancy. 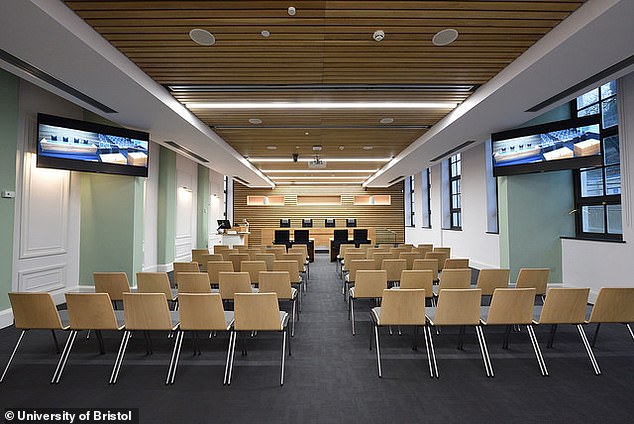 ‘Nightingale’ courts in public spaces like civic centres and university moot courts were opened to hear legal cases in a bid to tackle the backlog (pictured: University of Bristol moot court)

Crest said there is ‘catastrophic risk to public confidence, and effective enforcement of the law’ and that longer sittings and new courts are needed to tackle the problem.

While the authors of the study say this is worst-case scenario, the Ministry of Justice says the study is based on ‘extreme assumptions’.

In March 2020, almost half of all courts were closed and jury trials were paused to minimise social interaction between court users.

After jury trials were halted and around half of courts closed, up to nine in 10 hearings used remote technology to continue making progress throughout the pandemic.

Some jury trials resumed in May, after almost two months on hold, but this summer Justice Secretary Robert Buckland QC warned that clearing the lockdown-induced backlog could continue into next year.

According to the Criminal Bar Association, the latest statistics show there is a current backlog of more than 47,000 crown court cases in the system.