A protester has launched tomatoes at Emmanuel Macron during his first election victory walkabout in France.

The reelected president was meeting voters at a market in Cergy, northwest of Paris, when he was targeted.

The En Marche! leader was not directly hit but it sent his security team into a frenzy, shouting ‘Projectile!’ as they tried to shield the leader. 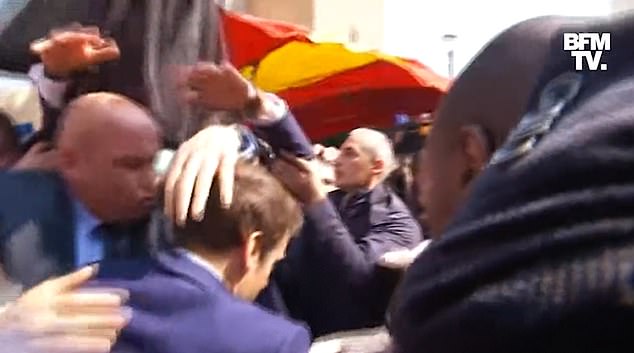 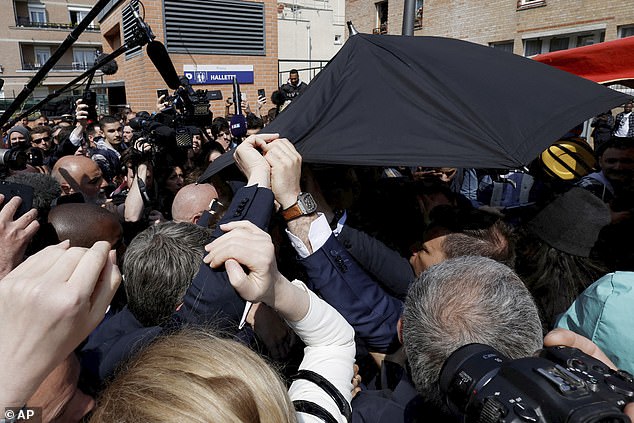 They opened an umbrella and Macron lifted his hands above his head as they tried to stop the rain of cherry tomatoes landing on him.

The president can be heard saying, ‘it’s not serious’, before he was ushered away by his bodyguards.

Another angle shows the protester launching himself from a table into the crowd, starting a scuffle, before he was detained.

It was the first time Macron took to the streets since Sunday’s vote and the visit was only announced by the Elysee Palace this morning.

He chose the region where he received fewer votes than left-wing candidate Jean-Luc Mélenchon in the first round in his bid to heal a divided France. 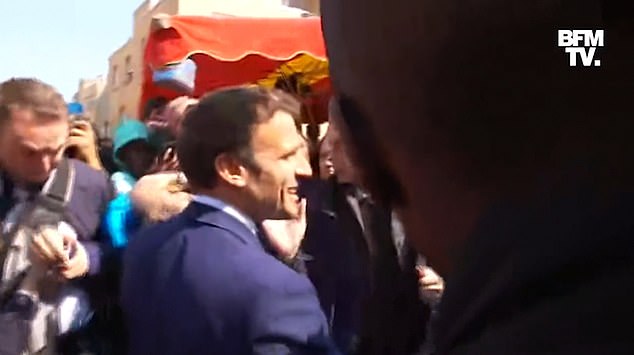 The reelected president was meeting voters at a market in Cergy, northwest of Paris, when he was targeted

Tensions are running high in France after another fierce election battle which saw Marine Le Pen gaining on the centrist pro-European leader but failing to seize power.

On Monday morning, hours after the result was announced, a knifeman shouted ‘we have to kill Macron’ as he stabbed a priest and a nun multiple times in an unprovoked attack. 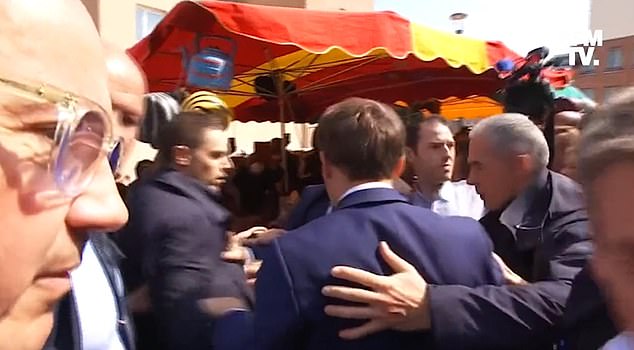 The president can be heard saying, ‘it’s not serious’, before he was ushered away by his bodyguards

Father Krzysztof Rudzinski, 59, was stabbed 20 times with a 7cm knife before Sister Marie-Claude, 72, was cut in the hand as she reportedly snatched the knife from the attacker.

French police arrested a 31-year-old French man from Fréjus, southeastern France, after the attack at 10am in the Saint Pierre d’Arène church, Nice.

Macron beat Le Pen 58.5 per cent to 41.5 per cent to win re-election on Sunday but Le Pen produced her highest-ever level of support in her three attempts to become France’s leader.

His win will be made official today and he will then hold a Cabinet meeting before setting a date for his inauguration ceremony, which must be held by May 13.

The centrist leader will be under pressure in the June polls to convince a divided nation to push through his election manifesto. 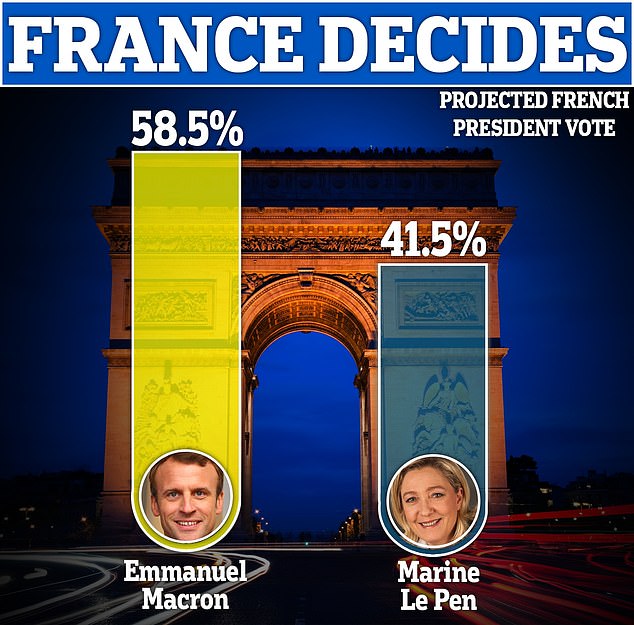 His tighter winning margin than in 2017 shows the discontent in France with his domestic record.

Five years ago, Mr Macron’s party won 308 out of 577 seats in the lower house of parliament.

If they can steal seats from Mr Macron’s party or form a coalition to vote down many of his plans, he will effectively be left as a lame-duck president for five years.

Eric Zemmour of the hard-Right Reconquest party has suggested forming a Right-wing alliance to block the leader’s reforms.

Mr Melenchon, who won 22 per cent of the vote in the first round of the presidential election, has said he should become the next French PM in the June polls.

He said: ‘Macron’s election is the worst result of the Fifth Republic. He swims in an ocean of abstentions and spoiled ballots.’

Turnout in French parliamentary elections is usually lower than the presidential vote and was just 42 per cent of eligible voters in 2017.

French economist Christopher Dembik said: ‘He [Mr Macron] risks being a lame duck faced with major social discontent if he wants to implement sensitive reforms such as for pensions.’