Protesters have spent a fourth night on the steps of Victorian Parliament as Labor powerbroker Adem Somyurek threatens to derail the state government’s controversial pandemic legislation.

It comes as Victoria records 1007 new coronavirus cases and 12 deaths. 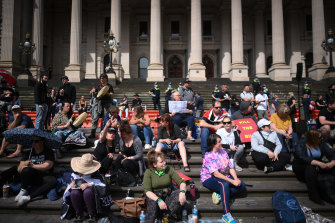 Protesters gather at on the steps of Parliament on Wednesday.Credit:Eddie Jim

The crowd on Spring Street was strong again on Wednesday evening, with many demonstrators staying late into the night. They sang, danced, held signs, and cheered as passing cars beeped their horns.

A man shouted, “kill the bill” through a megaphone as protesters joined in the chant, and some in the crowd turned hostile at the sight of reporters.

Many have vowed to keep demonstrating on the parliament steps until the state government dumps its proposed pandemic legislation, declaring amendments made to the bill late on Monday insufficient.

The legislation is intended to replace the state of emergency legislation that has given the government power to enforce health orders.

The emergency laws expire in December, and the new bill is meant to allow the government to keep enforcing policies, such as isolation requirements, while also being available for any future pandemic.

Mr Somyurek belatedly proved his COVID-19 vaccination status on Wednesday, after earlier refusing to do so, paving the way for his return to vote in the upper house on Thursday against the legislation.

In a piece published late on Wednesday for the Herald Sun, he vowed to block the reforms that he claimed rewarded “autocratic leaders who have ruled by decree”.

Mr Somyurek argued the Andrews government did not have the numbers in the upper house to pass the bill in its own right, but only claimed those powers with Labor-leaning crossbenchers.

“The three crossbenchers are likely to be consulted before caucus members and cabinet ministers. This leaves Andrews as the sole decision-maker, which is not acceptable in complex modern government.”

Reason Party leader Fiona Patten told Radio National’s Fran Kelly on Thursday morning that if Mr Somyurek were to appear in parliament and vote against the bill, it would be defeated.

“The numbers aren’t there. The numbers are very close at the moment so if Mr Somyurek was to appear, the vote would be 19/19, so it would fail,” she said.

Ms Patten said that, as an alternative to the pandemic legislation, the government could take an extension of the state of emergency laws back to parliament – something the Opposition had indicated it would oppose.

“So Victoria could actually end up being the only state that has no regulations around its pandemic,” she said. “I understand people saying let’s take time doing this, [but] we have been working on this legislation since March.”

MP shocked by threats to politicians

The Reason Party leader said she was “absolutely shocked” by the extremity of some sentiments on display at recent protests. “I’ve been having threats of snipers outside my office,” she said.

“I was walking down the street the other day and someone had tagged a sign saying, ‘hang [Daniel] Andrews’,” Ms Patten said.

“I don’t remember a time in Australia’s history where we’ve talked about killing our political leaders.”

“I don’t remember a time in Australia’s history where we’ve talked about killing our political leaders.”

There are 337 people in hospital with the virus, and 63 in intensive care. Sixty-five people in ICU have been cleared of COVID-19.

Another 6315 Victorians rolled up their sleeves to receive a dose of a COVID-19 vaccine at a state-run clinic on Wednesday. Of the state’s population over the age of 12, 88 per cent are now double-dosed.

With Bianca Hall and Rachel Eddie

'Teen Mom 2': Jenelle Evans Says She Did Worse Things on Camera Than Her Husband Shooting the Dog

The best, most secure and prettiest laptop bags