More than 200 life-saving anti-stab kits are put in bars, schools and shops across West Midlands in honour of 26-year-old knifed to death outside pub

More than 200 life-saving anti-stab kits have been placed at bars, schools and shops across the West Midlands in honour of a 26-year-old who was knifed to death outside a pub.

The kits, which contain bandages, tourniquets and gloves, have been placed in easy to reach locations so that members of the public can stem catastrophic bleeding before paramedics arrive on scene.

There are 227 of the packs issued across Wolverhampton, Sandwell, Dudley, Birmingham, Walsall, Solihull and Coventry, which have been funded by West Midlands police and crime commissioner David Jamieson.

Their arrival comes after intense campaigning from mother Lynne Baird, who set up the Daniel Baird Foundation in memory of her 26-year-old son after he was stabbed to death outside the The Forge Tavern in Digbeth, Birmingham, in 2017.

Ms Baird said: ‘Sadly in 2017, when my boy was attacked, there wasn’t a first aid kit to hand in the area.

‘Had there been, then Daniel might still be with us today. I would love it if these kits could be placed in every busy area of the West Midlands.’

In Central London, 320 of the packs have been deployed near key venues. 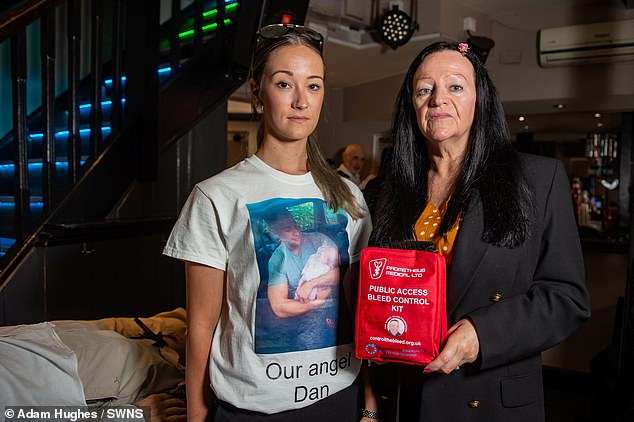 Lynne Baird and daughter-in-law Stacey Coombes have campaigned for bleed control kits to be deployed at key locations such as pubs and venues, after Ms Baird’s son Daniel was stabbed to death in Birmingham in 2017 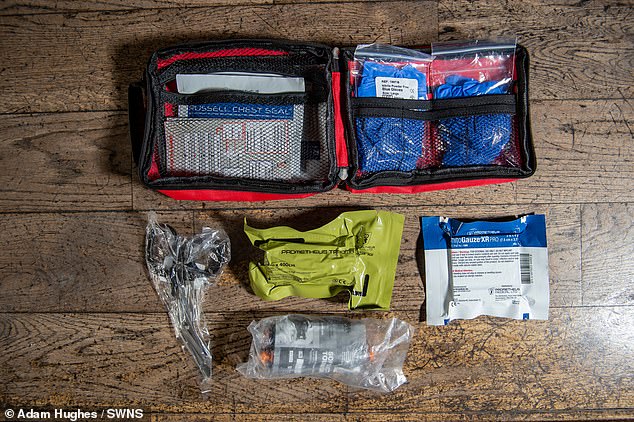 There are 227 of the kits situated at sites across the West Midlands, while Central London has 320. The packs contain gauze, tourniquets and seals that can be used to slow bleeding and treat chest wounds before paramedics arrive on scene

More recently there have been several high profile murders in the West Midlands, including the death of 15-year-old schoolboy Keon Lincoln.

The teenager was stabbed and shot after being attacked by a gang of youths in Handsworth, Birmingham, on January 21.

And six months ago a student was stabbed to death and seven others were injured after a man went on a knife rampage in Birmingham city centre.

Just two days ago a murder investigation was launched after a man died after being stabbed in the neck near to the 2022 Commonwealth Games site in Perry Barr.

Each kit is designed to be easy to use and keep an injured person alive until they can receive medical treatments from a professional medic.

Ms Baird added: ‘We know how important it is that when someone is stabbed, cut or injured that they receive first aid treatment straight away.

‘These kits are designed to save lives and I’m delighted so many are now in areas near to where they are needed most.’ 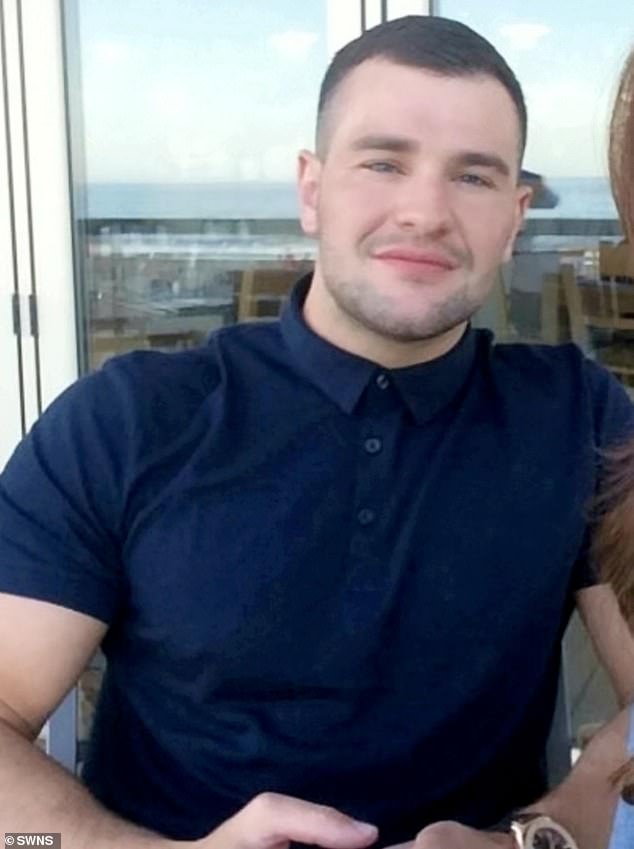 Daniel Baird was stabbed to death outside a pub in Digbeth, Birmingham in 2017. His mother Lynne said: ‘When my boy was attacked, there wasn’t a first aid kit to hand in the area. Had there been, then Daniel might still be with us today’

Bleed control kits have been deployed across London and the West Midlands to provide rapid treatment to stab victims before paramedics arrive.

Hundreds of kits have already been placed in London at bars and pubs in response to soaring incidents.

Knife crime in the West Midlands has doubled since 2012 and the PCC says they are keen to ensure these kits are distributed across the region.

David Jamieson, the West Midlands Police and Crime Commissioner, said: ‘The bleed-control kits are a simple yet smart idea that has been designed to save a life.

‘That is why I took little convincing that we should roll them out across our region.

‘Sadly, knife crime has been rising across the country in the last decade, and so too has the number of fatalities.

‘These new kits are good value for money and if they save just one life then they will have been worth the investment.

‘I’d also like to praise Lynne Baird for her excellent tireless work on this issue. Without her, none of this would have been possible.’

Do cats have to be microchipped?

Firefighters rescue hapless ducklings who fell into a grid