Putin gets his big table out again: Russian leader invites UN Secretary-General to sit down at his 100,000-Euro 20-foot gold-leaf furniture

The comically-large table Vladimir Putin uses to host world leaders has made a reappearance as the Russian dictator hosted UN Secretary-General Antonio Guterres for talks about the war in Ukraine.

The now-famous gargantuan table has been a feature of Putin’s televised engagements with world leaders – with many speculating that the table is meant to enforce social distancing around the Covid-conscious Russian president. 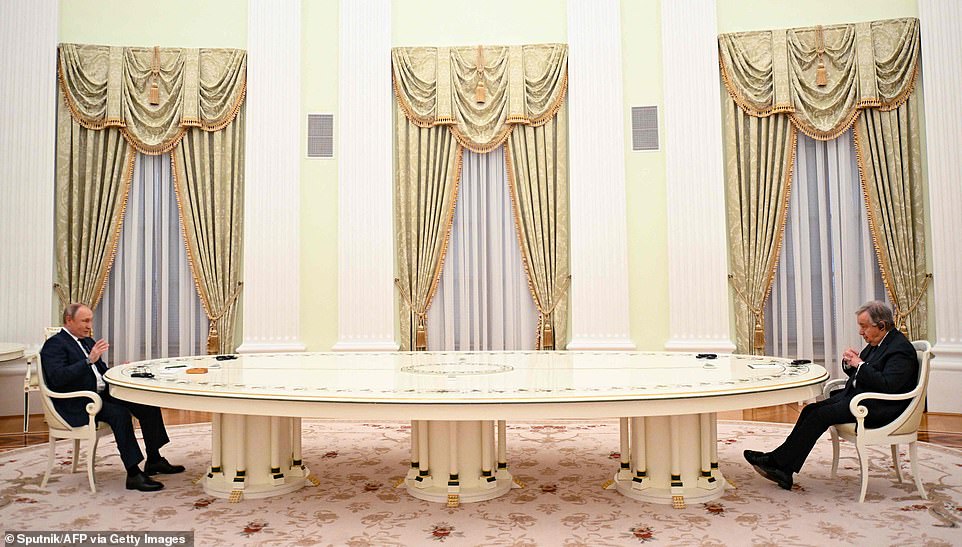 Pundits were struck by photos as Putin and French President Emmanuel Macron met to discuss the Ukraine crisis before the invasion, with some suggesting Mr Putin wanted to send a diplomatic message.

But two sources said after the meeting on February 7 that Mr Macron had been asked to take a Covid test before meeting Mr Putin, but had refused one offered by the Russians over fears they would obtain his DNA.

The interior designer who built the table has said that in today’s money it would cost as much as 100,000 euros.

Entrepreneur Renato Pologna, who heads up a company called ‘Oak’ in Cantù, Italy also dismissed suggestions the table was made with Covid-19 social distancing in mind, telling Italian newspaper Corriere that it was built 25 years ago.

The Russian president was photographed hosting a meeting with his French counterpart Emmanuel Macron last week at the Kremlin, each sat at either end of the 20ft white and gold table.

German Chancellor Olaf Scholz also took his turn to meet Putin as part of the failed diplomatic attempts to cool the crisis in February, and was also pictured at the table. 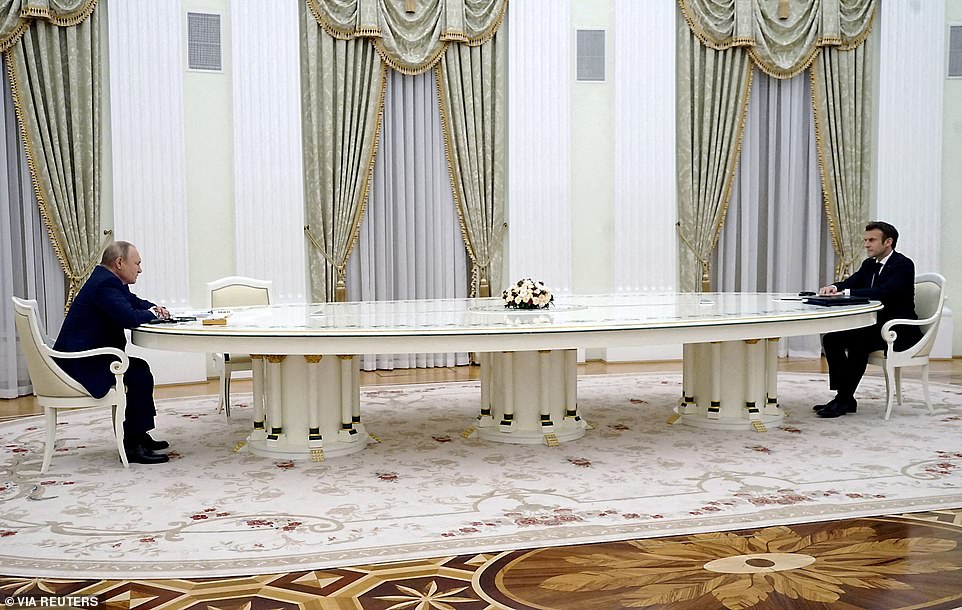 The interior designer who built Vladimir Putin’s now-famous gargantuan table that he uses for a meeting with the likes of French counterpart Emmanuel Macron (pictured) has said that in today’s money it would cost as much as 100,000 euros 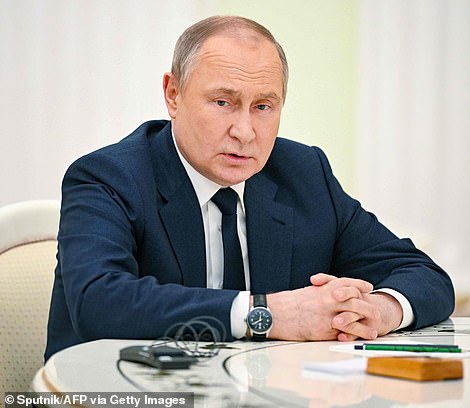 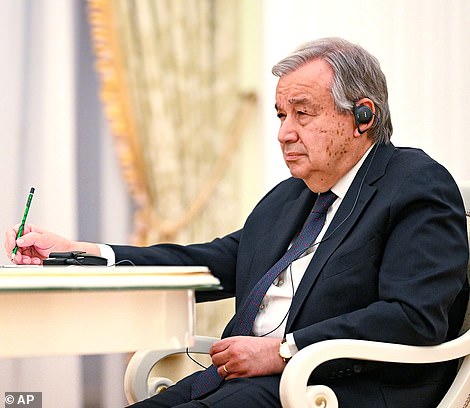 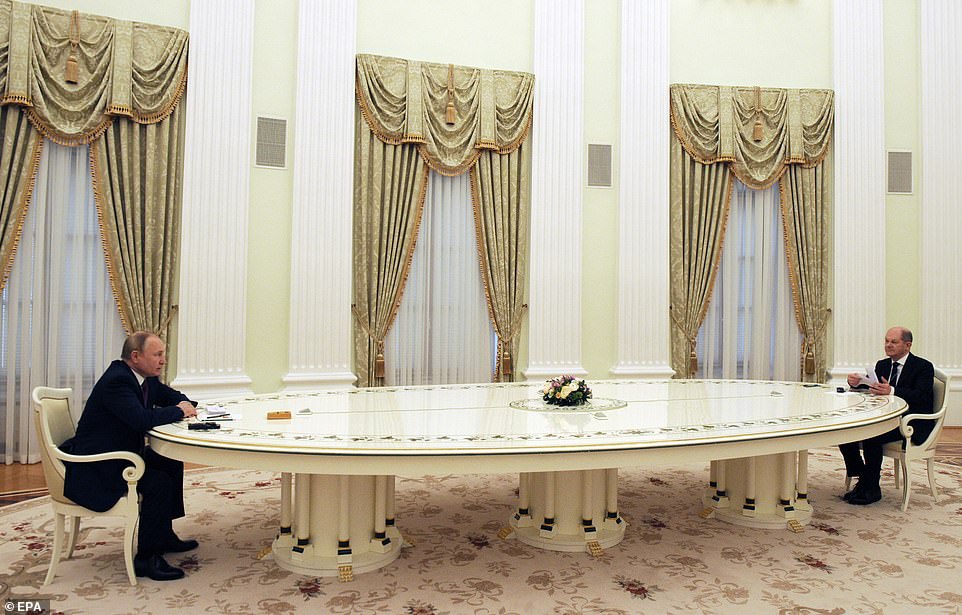 Despite the significance of the talks, it was the table that perhaps drew the most attention, with social media users quickly creating memes poking fun at the huge distance between the two leaders, and the giant table.

But Mr Pologna was not phased by this, telling the Italian newspaper that he was thrilled to see his work getting so much attention.

‘I recognised (the table) as soon as I saw it,’ he said. ‘I am proud of it, I always get excited when I see that my work is in the background of something important. I hope it brings good luck against the war.’

When asked about the memes, he said he found them ‘really funny’.

‘saw that someone turned it into a swing: brilliant. Someone else put lap dance poles on it. They even made it into a curling rink. At this point we can say that it is a table that develops creativity,’ he told the newspaper.

He explained that the table is six meters long and two-and-a-half meters wide (roughly 20ft by 8.5ft), is made mostly of oak, and is completely unique.

The designer called the piece ‘very challenging’ to handle, with the accents on the table being made from gold leaf. The decorations on top were also hand-made. 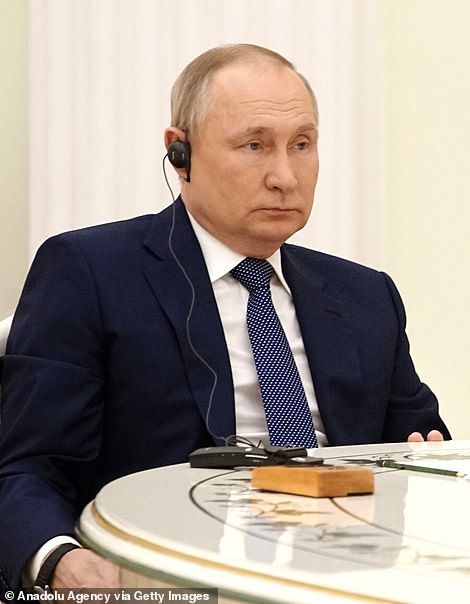 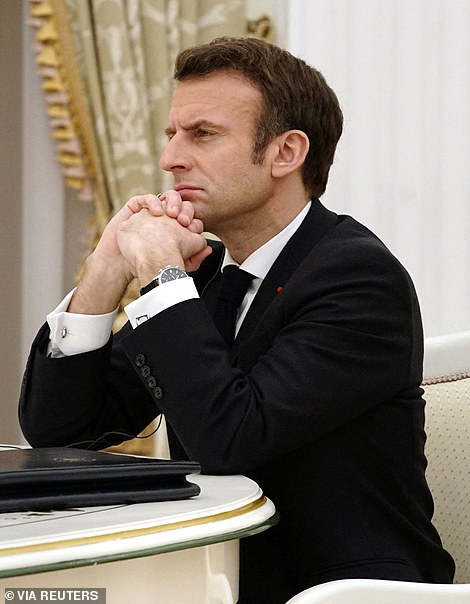 The Russian president was photographed hosting a meeting with his French counterpart Emanuel Macron, each sat at either end of the 20ft white and gold table

When asked whether it was built specifically for use during the pandemic, Mr Pologna quashed the suggestion.

‘It may be useful for the purpose but certainly the length has nothing to do with the pandemic. I made it 25 years ago!’ he said.

He said that the table was just one piece of a larger project he was tasked with, which was to fit out the interior of one of the Kremlin buildings from 1995 to 1997.

The same building, he said, once hosted G8 meetings in 1997, and his company designed furniture, floors, lighting, fireplaces, ceilings and marble wall finishes.

When asked about the price for the table, Mr Pologna said at the time, he was paid in Italy’s currency Lire, which was officially replaced by the Euro in 2002.

The designer said that the Kremlin was not his only up-market client. He said many were international, adding that he had done work for others in Arab countries, such as ‘sheikhs and royal families,’ and the sultans in Malaysia.

‘At one time I had orders from Gaddafi and Saddam’s family,’ he said, but refused to divulge any further information to Corriere.

The image of talks between Putin and Macron in February were widely mocked on social media. 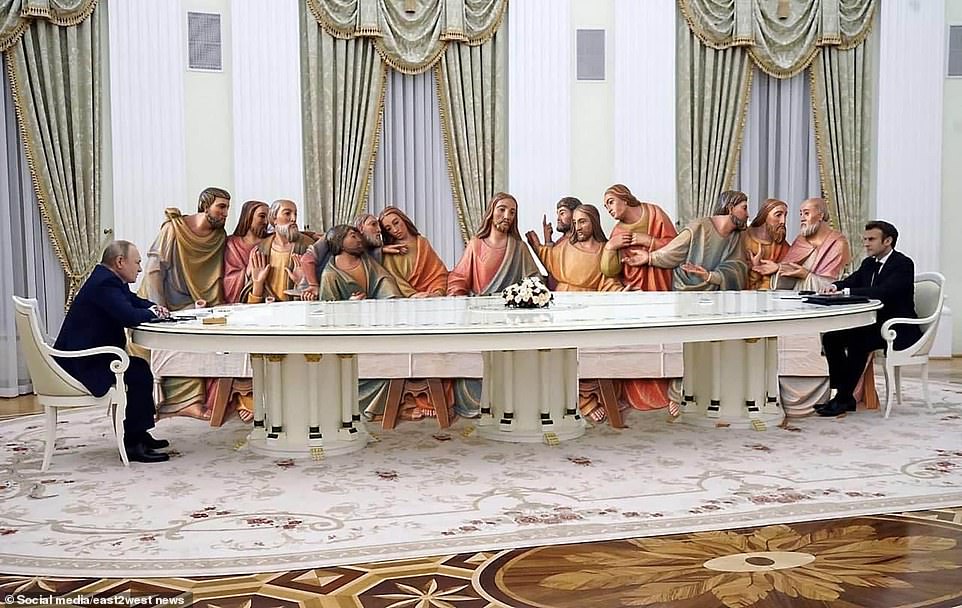 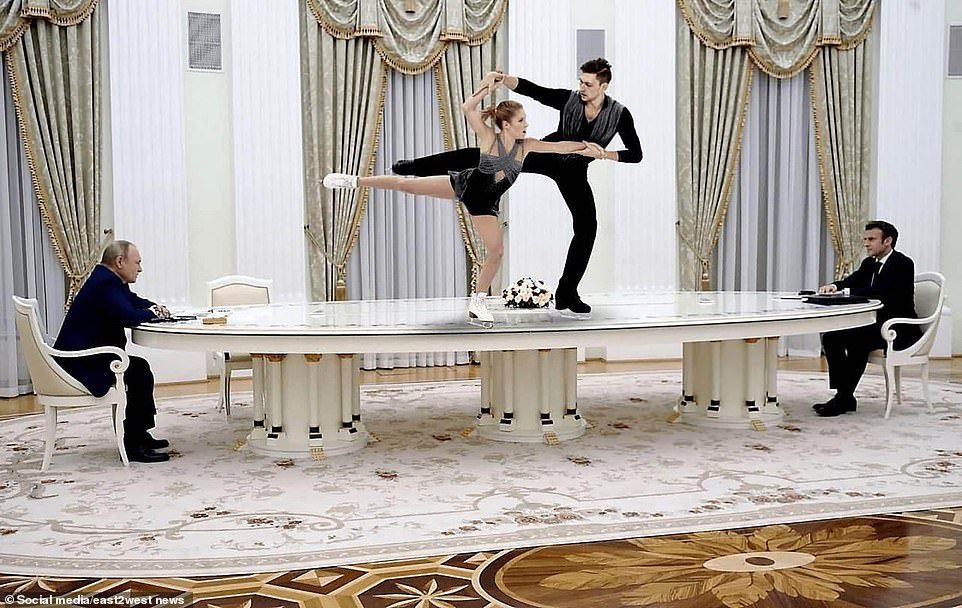 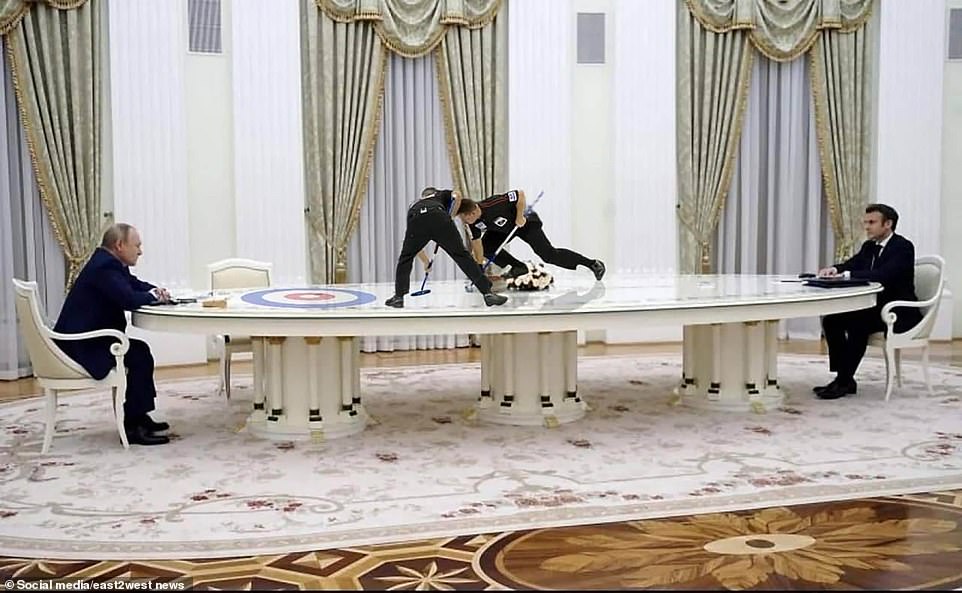 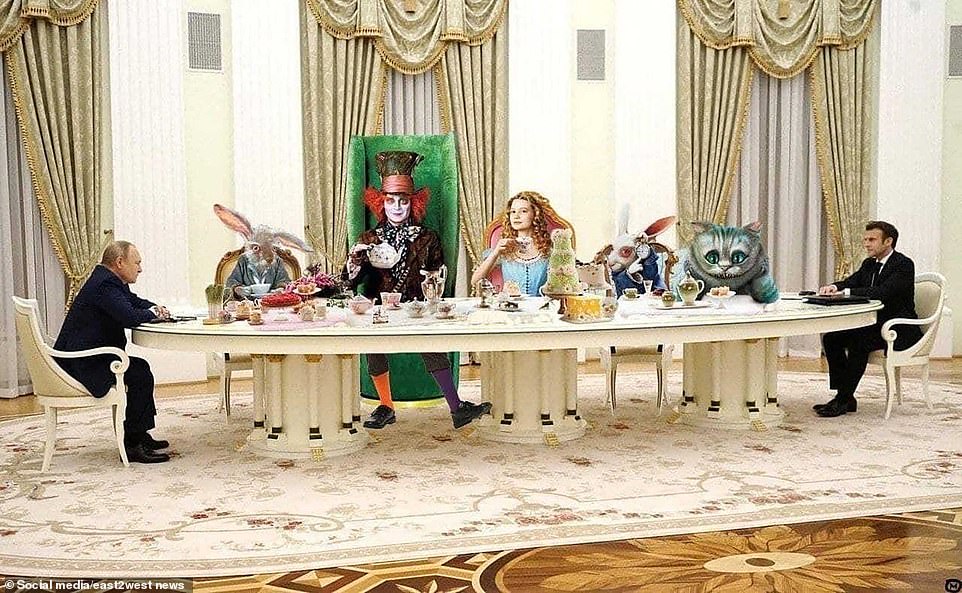 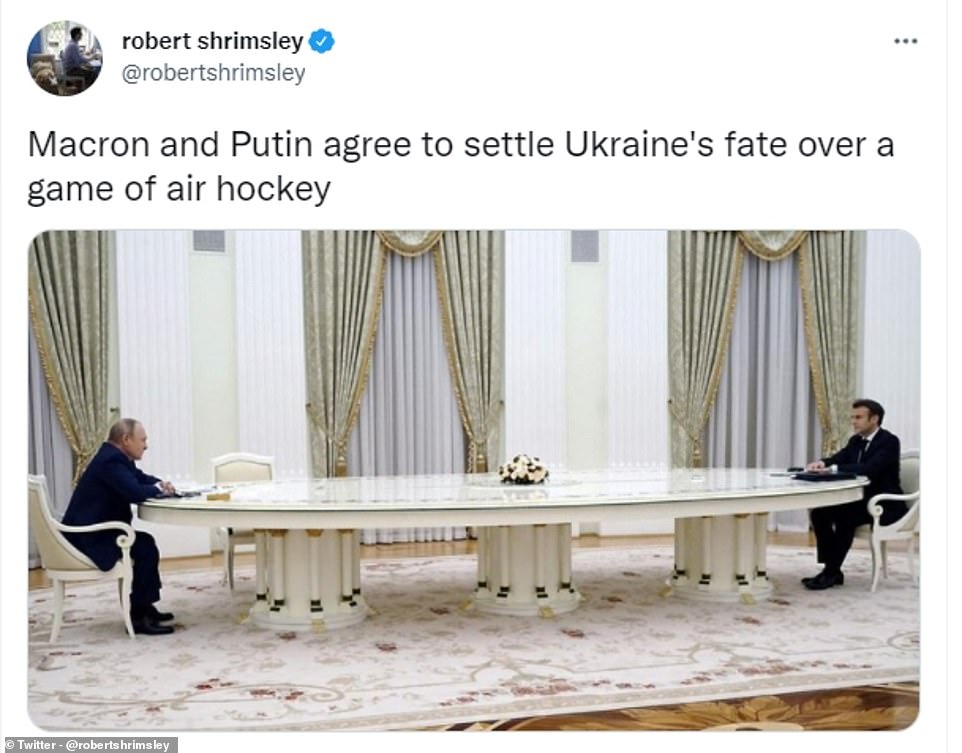 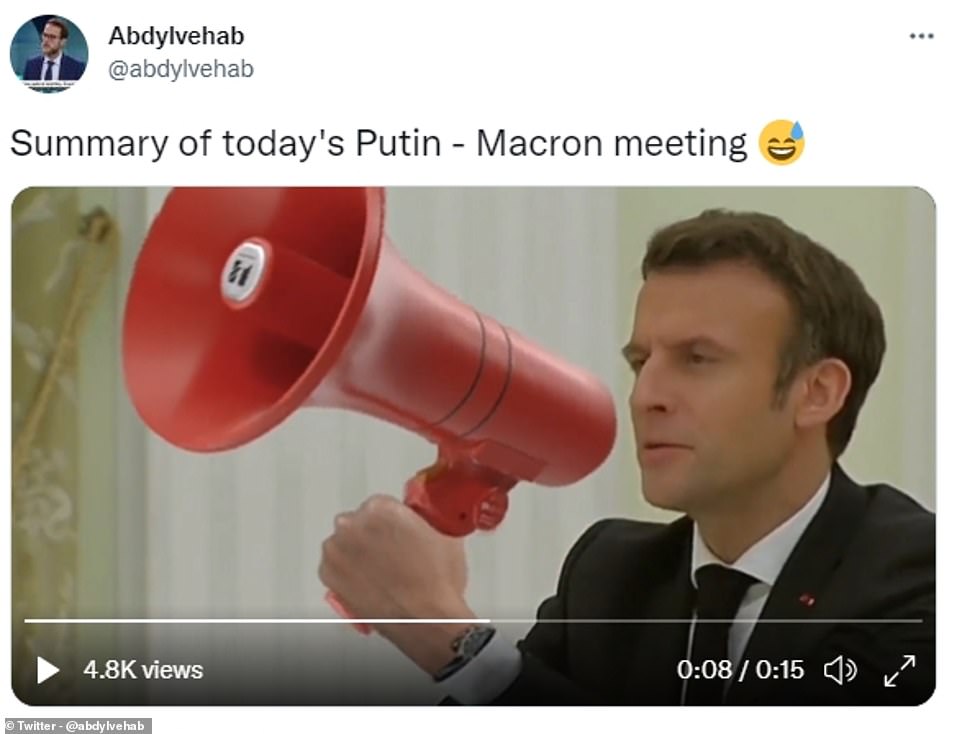 The picture, which shows the leaders sitting several metres apart at each end of a long oval table in the Kremlin yesterday, was doctored to show Putin and Macron playing badminton, table tennis and air hockey in a bid to ‘decide the fate of Ukraine’.

Other versions mocked Macron and Putin for not holding the talks through a zoom call as they would have been ‘closer’ and suggested the pair had sat further apart than the distance ‘between the Russian troops and the Ukrainian border’.

Others showed Macron speaking into a megaphone so that Putin could hear him from the other end of the table, engaged in a Harry Potter-like duel and likened the meeting to a scene from The Incredibles.

The interview with Mr Pologna came as Russia said some of its troops were returning to base after exercises near Ukraine, and it mocked repeated Western warnings about a looming invasion.

Green levies WILL be added to your gas bill

‘Walkable chair’ makes standing on the job a lot easier

I'm a cleaning pro – there's 8 areas in your bedroom that are filthy, what you need to clean NOW and how to clean them