‘Make way!’ Moment Queen’s Guardsman flattens child who stepped into his path at the Tower of London

A child was knocked to the ground by a member of the Queen’s Guard after accidentally stepping into his path at the Tower of London.

Footage captured from the Tower of London earlier today shows a group of tourists taking photographs of the two Guardsmen in their ceremonial bearskin hats as they march across the grounds.

However just seconds later a young child walks into the path of one of the soldiers who immediately shouts: ‘Make way!’

The child is then knocked to the ground by the marching Guardsman who tries to step over them and carries on past the tourists. 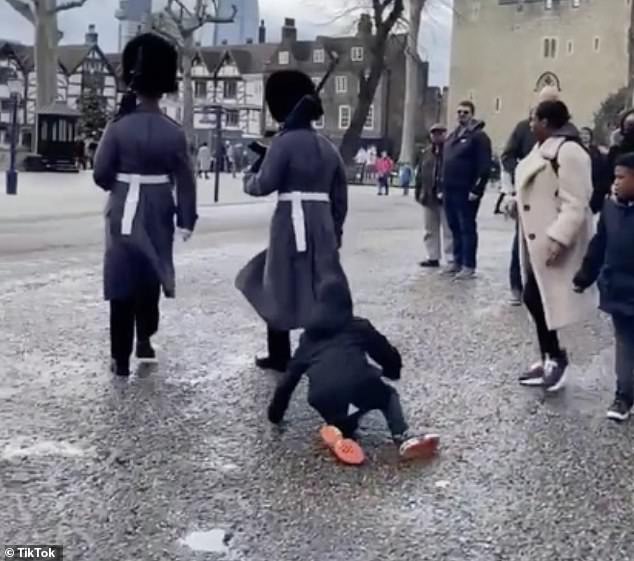 A spokesperson for the Ministry of Defence told MailOnline: ‘We are aware of an incident at the Tower of London earlier today during a routine patrol.

‘The Guardsmen on duty warned members of the public that a patrol was approaching but the child unfortunately ran out in front of the soldier unexpectedly.

‘The soldier tried to step over the child and continued on his duty.

‘Following the incident, the soldier checked on the child and was reassured that all was well.’

The Queen’s Guard are charged with protecting the official royal residences across the UK.

They are known for their distinctive red tunics and bearskin hats but during the autumn and winter months they wear long grey coats instead. 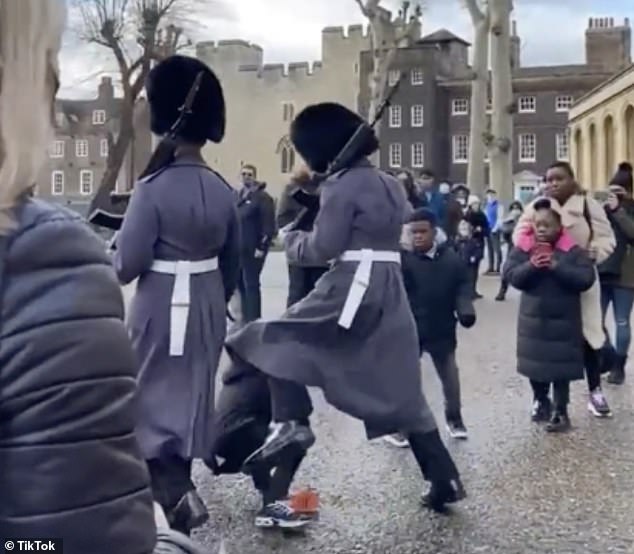 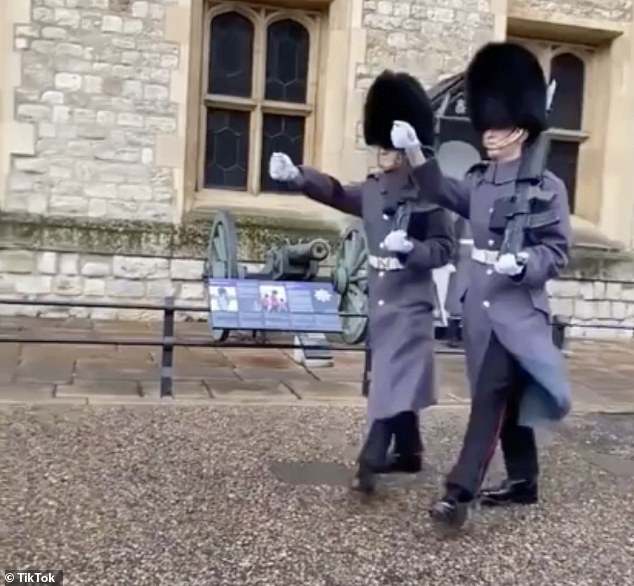 The soldiers are picked from one of five infantry regiments and have been protecting royal residences for three centuries.

The units, manned by fully-trained, serving soldiers, have more than 350 years of history and have defended monarchs since Charles II took the throne after the English Restoration in 1660.

There are thought to be guidelines in place for guardsmen to deal with obstacles, which include stamping their feet and shouting.

Raising a rifle is considered a ‘final warning’, after which the guardsmen is allowed to detain the person in question.

If a person obstructs their path the Guardsmen will shout: ‘Make way for the Queen’s Guard.’

The latest scenes have since gone viral after it was shared on TikTok with the caption: ‘My sister went to England, first day in.’

One user wrote: ‘Just no need for this.’

Another viewer added: ‘Why can’t we change the rules so that the guards can just walk around people? I’m sure the answer is ”tradition” but who really cares.’

In 2018, a tourist, who had crossed a rope barrier, was pushed out of the way by a member of the Queen’s Guard at Windsor Castle.

The tourist was not injured and managed to remain on her feet despite the incident.

Michael B. Jordan Just Showed Off His Ripped Abs in a New Shirtless Vacation Photo

Spectacular blood moon ‘to bring end of the world’ next month

Tinder adds panic button to save users from dangerous dates