Singing in the rain! Heavy rain doesn’t dampen spirits at Leeds Festival but the sun will be back for Bank Holiday Monday along with temperatures of 73F

Rain hasn’t dampened spirits at Leeds Festival today, where revellers are reaching for their waterproofs so they can sing and dance through the heavy showers.

Some regions will be hit with 40mph gusts of wind while parts of south west England, including Dartmoor, will see up to 60mm of rain today. On average, it receives only 90mm of rainfall throughout the whole of August.

The dismal conditions will be worsened by miles of roadworks on motorways and scores of train cancellations due to the closure of London Euston station for engineering works.

But there is hope for some sunshine on Monday, which will mean a brighter day for revellers at Notting Hill Carnival, who face soggy celebrations today with showers forecast later on.

For those mourning the recent heatwave, forecasters are predicting another Indian summer, as the El Nino weather phenomenon is set to bring hotter-than-usual temperatures until November. 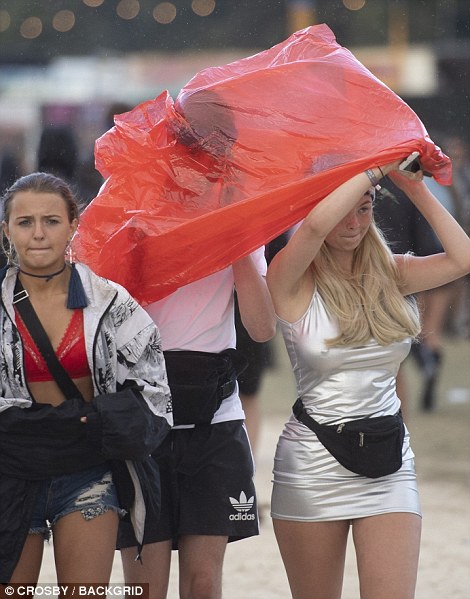 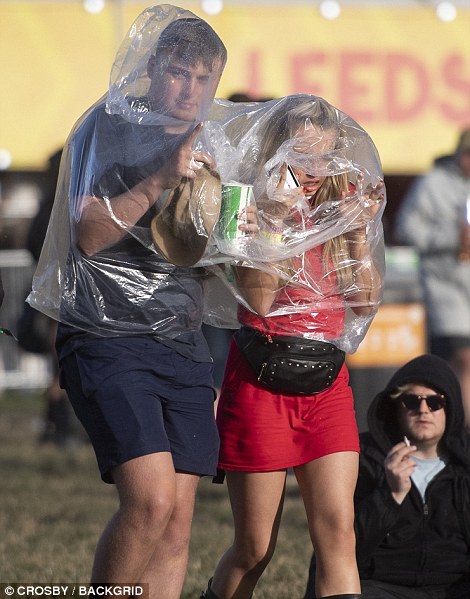 Rain hasn’t dampened spirits at Leeds Festival today, where revellers (pictured) are reaching for their waterproofs so they can sing and dance through the heavy showers 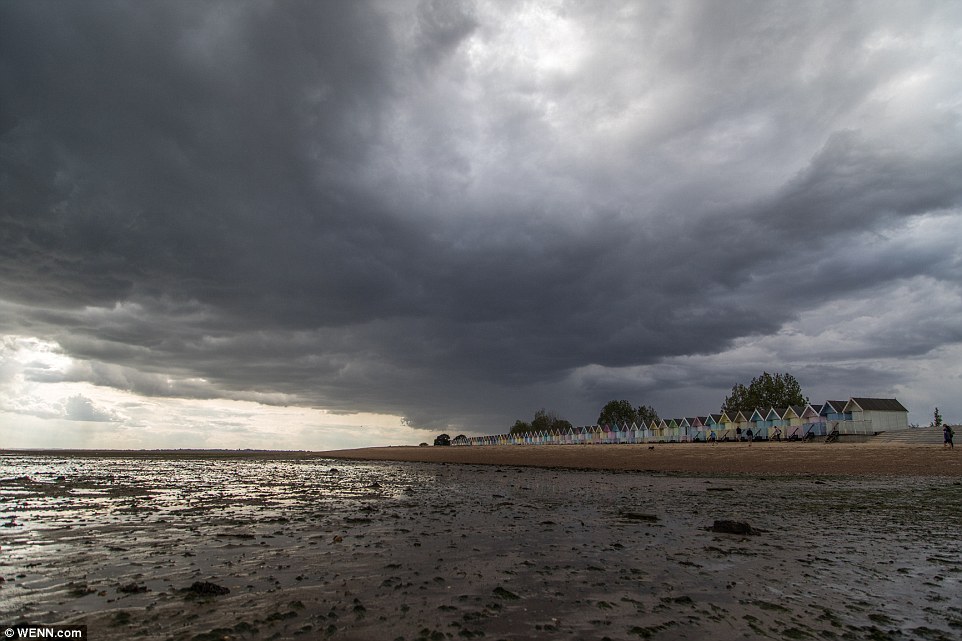 Large parts of Britain are due a Bank Holiday washout today with heavy rain expected to fall across the country. Pictured: Dark skies blow over beach huts on West Mersey Beach in Essex, where temperatures will stay mild but there will be wind and rain People were pictured huddling under tents and other waterproofs on the pebbled beach in Sidmouth, Devon yesterday 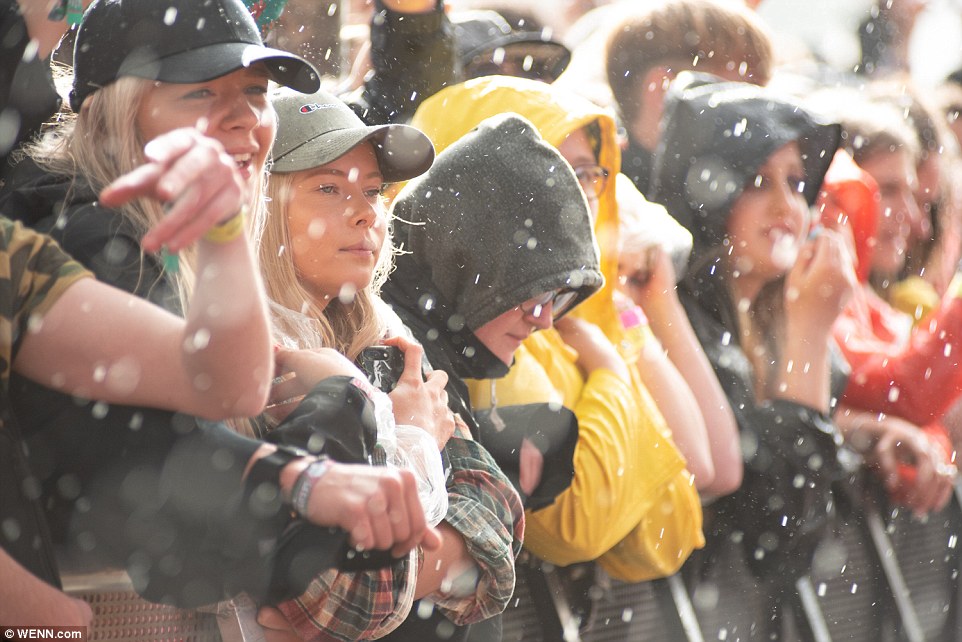 Festival goers in Leeds quickly abandoned summer clothes and adorned hoodies, baseball caps and raincoats at the festival there yesterday Temperatures will reach a high of 18C in London today. Bank Holiday trippers will be greeted with temperatures of 17C in Brighton and 16C in Blackpool.

Met Office meteorologist Sarah Kent said: ‘We’ve got outbreaks of rain quite widely and that rain will be heavy. We’re looking at thickening cloud bringing heavy rain into western areas and then that spreads across all parts.

‘The strongest winds are tied in with the heaviest rain. For a time we will see the wind gusting at 40mph. The most frequent gusts will be along Irish Sea coasts.’ 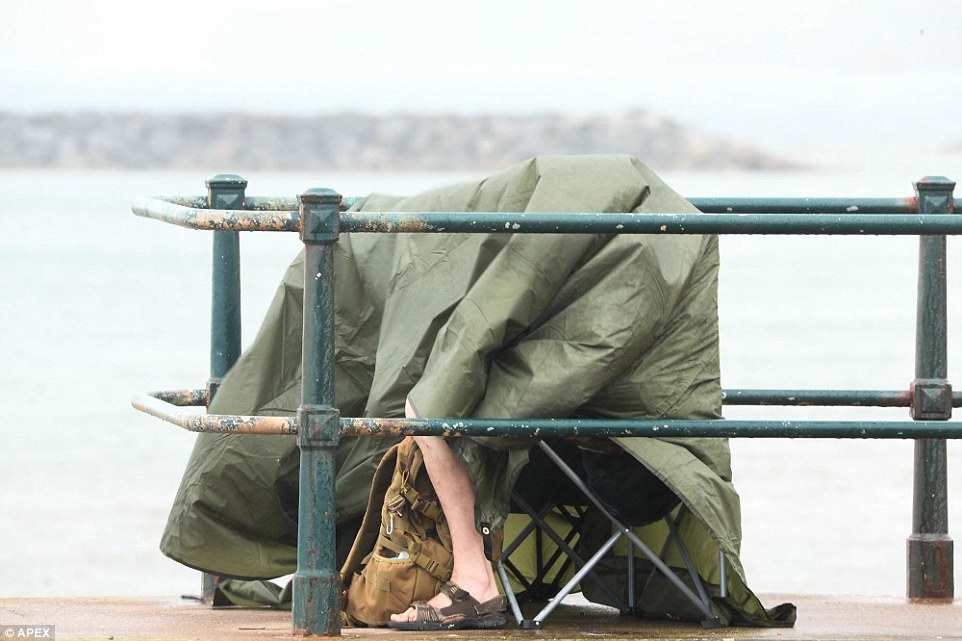 Beach-goers in Sidmouth, Devon, had to protect themselves from poor weather yesterday. This person has covered themselves in a large green waterproof to shelter from rain and high winds 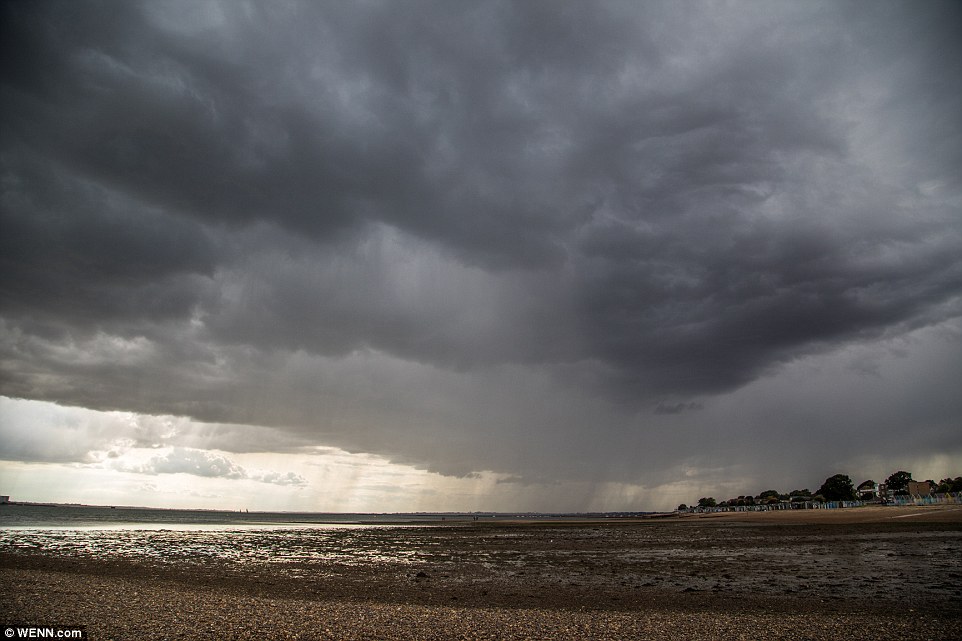 Temperatures are expected to rise tomorrow. Ms Kent said: ‘Some parts will see bright spells on Monday although it’s going to be a rather cloudy day. There are going to be a few showers around.’

There were 90-minute delays yesterday on the M6 as it was closed while emergency services dealt with a man standing on the wrong side of bridge railings above junction 10. West Midlands Police said the man was detained under the Mental Health Act.

‘A region marked ‘warmer likely’ in El Nino conditions means a greater than 50 per cent chance that the temperature will be in the top third of temperatures observed in the season.’

Met Office forecaster Greg Dewhurst said: ‘Largely fine weather is expected from Thursday. In the period to September 22, it is most likely much of the UK will see a good deal of dry, warm and settled weather.

‘Daytime temperatures are expected to be above average overall, especially in the South and East where it may become very warm – and with the warmer conditions perhaps spreading further North and West at times.’

The Met Office long-range forecast to the end of October said: ‘The likelihood of above-average temperatures is greater than normal.’ 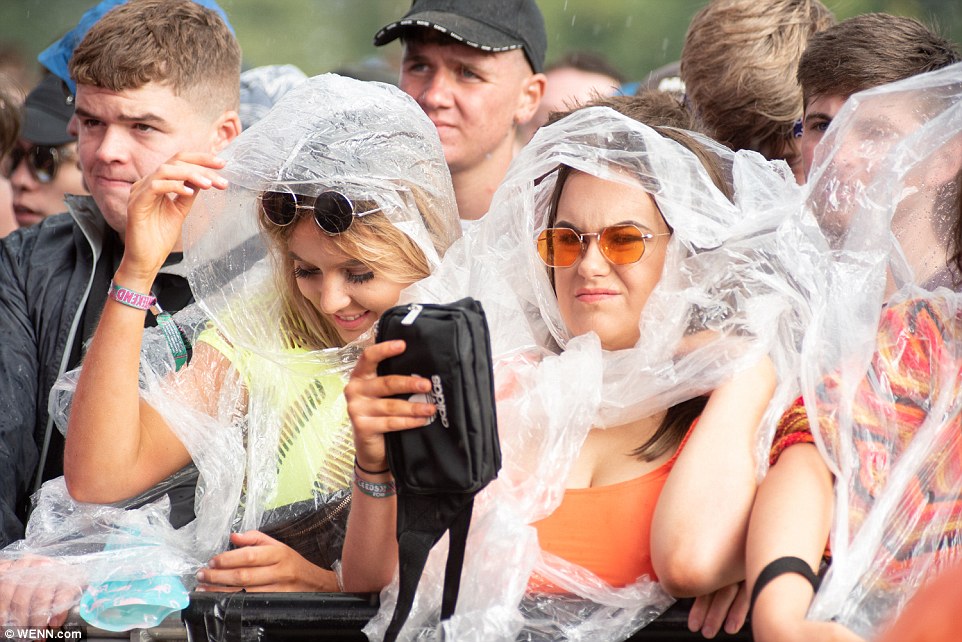 Two women cover up to try and shield themselves from the downpour at Leeds Festival yesterday. Despite the rain, people were still enjoying the second day of the festival