The daily case number is a new record for Victoria, surpassing the previous record – set on Tuesday – by more than 1000. Wednesday’s figures bring the total number of active cases in Victoria to 19,994. 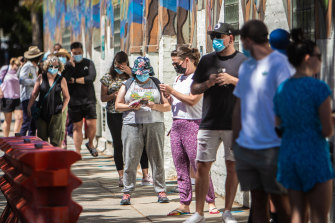 A COVID-19 testing queue at Collingwood on Tuesday. Credit:Scott McNaughton

The number of people in hospital with the virus has remained steady at 397. There were 106 people in the intensive care unit on Tuesday, 62 of whom were active COVID-19 cases and 28 on a ventilator.

Another 535 Victorians rolled up their sleeves on Tuesday to receive a dose of a COVID-19 vaccine, while it was another big day for testing, with 75,132 results processed.

The sharp increase in Victoria came as the NSW tally rose to 11,201.

In good news for Victorian travellers, Queensland Premier Annastacia Palaszczuk announced on Wednesday morning that, from January 1, travellers from interstate hotspots could use a rapid antigen test, rather than a PCR test, to satisfy the state’s border requirements.

Queensland has been under increasing pressure from other jurisdictions, including Victoria, over its requirements for PCR testing for travellers, as testing facilities around Australia struggle to keep up with demand at facilities through the holiday season.

In a statement released on Tuesday, Chief Health Officer Brett Sutton urged Victorians who needed proof of a negative PCR test to travel interstate to get tested after midday, in a bid to address the blowout in wait times at clinics.

Testing sites were still overwhelmed on Wednesday morning, with at least eight at full capacity and forced to close within minutes of opening about 7.20am.

Otherwise, the shortest wait time listed on the state government’s website was 15 minutes at Hume City Council. Several other facilities had 60-minute wait times about 7.30am, while the wait time was 180 minutes at both Akoonah Park Berwick walk-in testing site and Chadstone Golfers Drive.

By about 8.30am, the list of testing sites at full capacity had grown to 21.

Australia’s chief health officers are considering reducing the isolation period for people who test positive to COVID-19 following recent moves by health agencies in the US and the UK to shorten isolation requirements.

A senior federal government source, speaking on the condition of anonymity to detail the committee’s confidential work, said the Australian Health Protection Principal Committee was expected to report back early next year, with recommendations likely to be presented to national cabinet.

Speaking on ABC News Breakfast, Cricket Australia chief executive Nick Hockley said the organisation remained confident its strong COVID-19 safety protocols would see it through the remainder of the season.

With Paul Sakkal and Jewel Topsfield