A FURIOUS recruiter claims that her “slimy” boss forced her to tell a size 16 jobseeker she didn't get the role because he thought she was “too fat”.

Faye Angeletta has slammed her “horrible” manager for making her deliver the news – after he branded the potential recruit as “not the slimmest”. 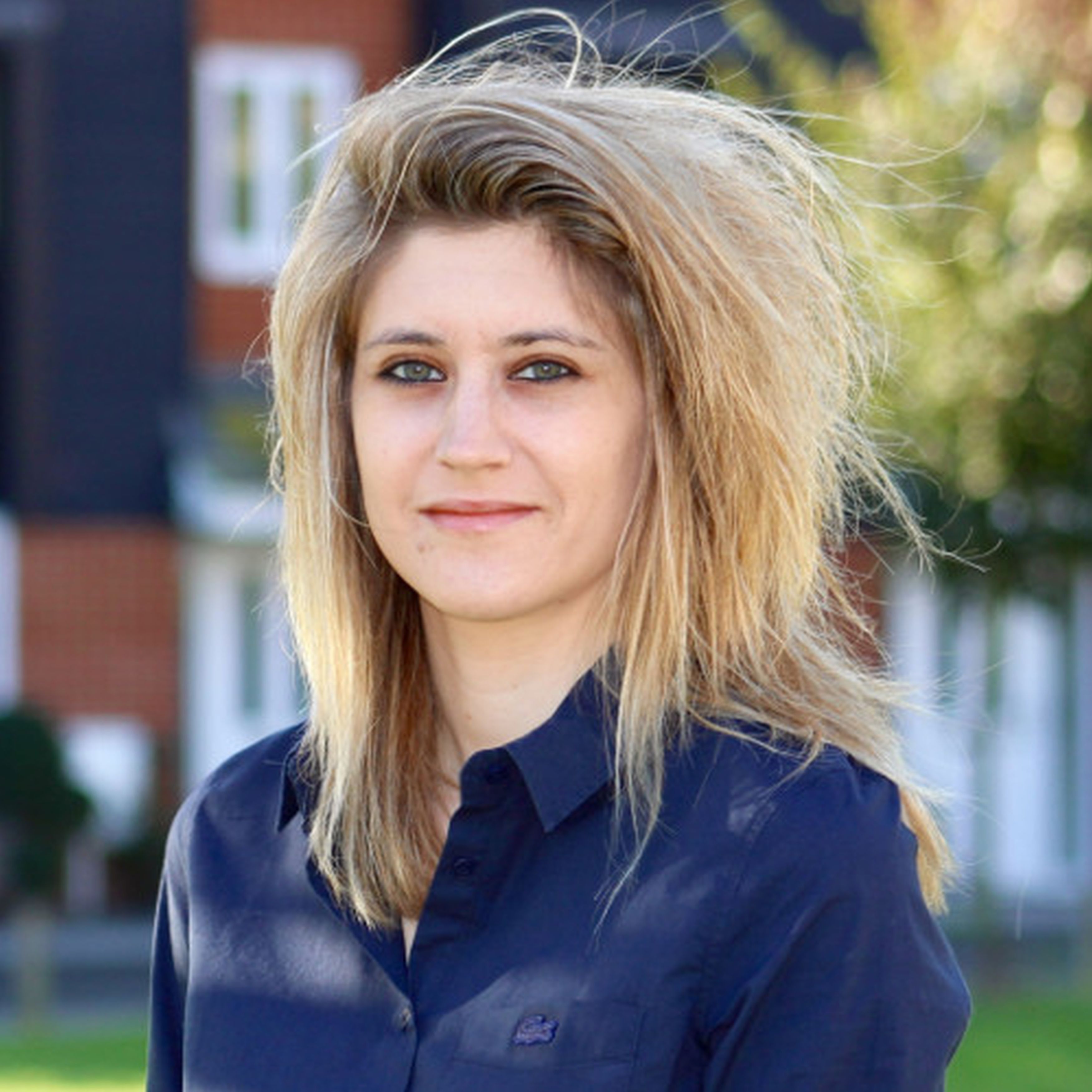 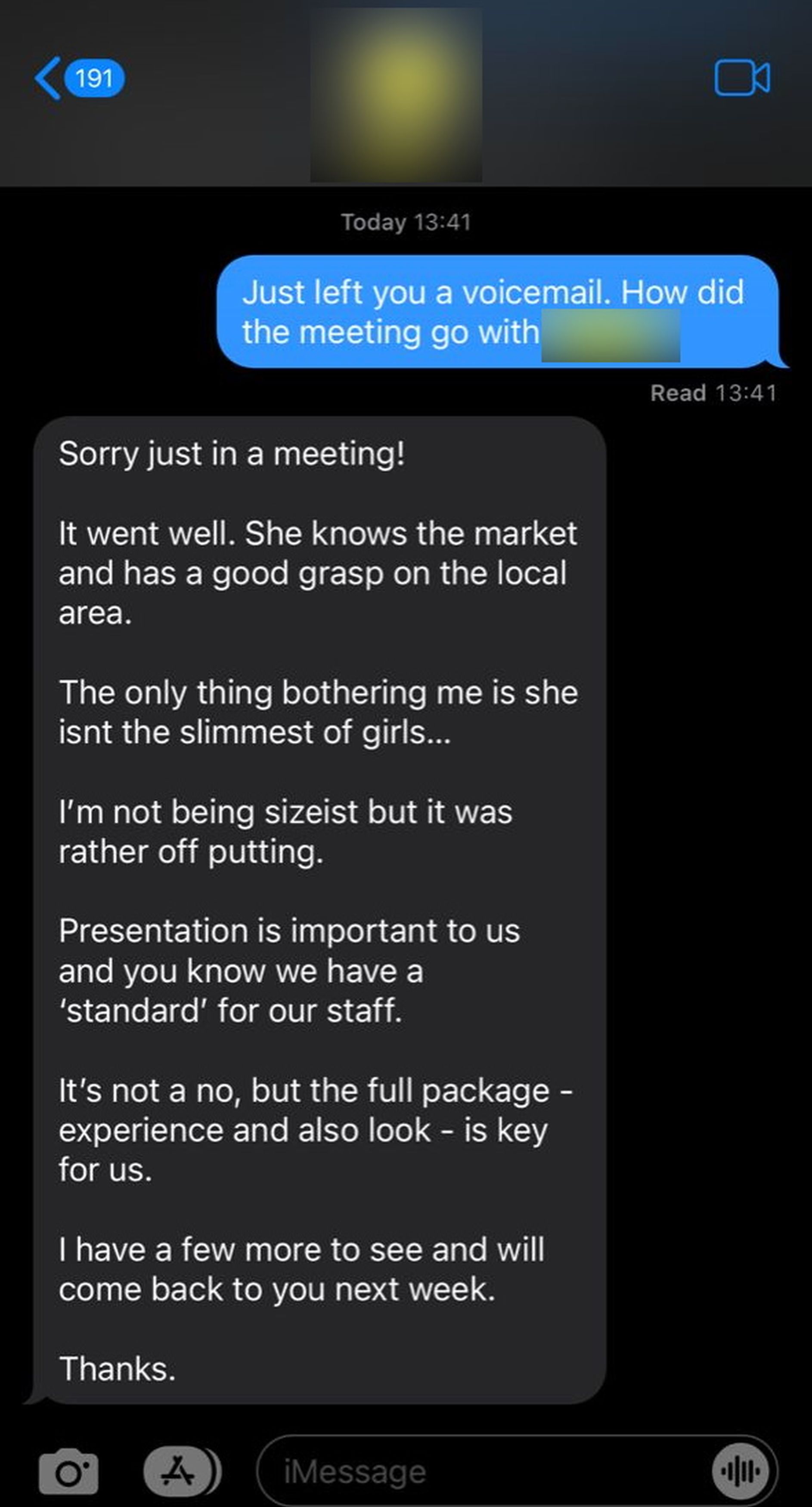 Faye, who is the director of TDM Recruitment,  had put forward the candidate to one of her clients for a role in new home sales.

The company director, 32, branded the boss as “slimy and horrible” after he sent back feedback saying he feared for the showroom stairs.

He even said that he worried that the candidate would suffer a “heart attack” due to her “size” despite her just recovering from battling cancer.

Faye then pulled the woman from the running and explained she could not open her up to bullying over her appearance.

However the recruiter claims the candidate then demanded to know what the “honest feedback” from the interview was, so she felt she had to tell her the brutal comments.

Posting online to shame the boss’ “unbelievable” response, Faye was inundated with comments from other recruiters who branded the bloke “absolutely disgusting”.

Faye, from Stratford, East London, said: "I've been working in recruitment for seven years. It was unbelievable.

"That message came through on a text message. I absolutely couldn't believe he'd put it in writing.

"On the phone he said 'well, you know, I worry for the stairs that we've got in the show room or her having a heart attack'.

"He was a slimy, horrible man. He laughed down the phone. This woman is a size 16 – the average size for a woman in the UK. It's just honestly unreal."

Faye refused to bite her tongue when giving feedback to the woman, trying to encourage her to not “reengage” with the client in the future.

She even advised the client in her social media message to use a “modelling agency” rather than recruitment if looks meant that much to them.

Faye added: "I'm looking for the best person for the job. At the moment across the whole of the UK, there is a shortage of talent.

"I said to him 'I just want you to realise that your reason for not taking this candidate is wrong.

"There will be criticism and I have to filter what is said to me back to the client. This lady had a battle with cancer. She is actually taking steroids.

"I had one candidate who hadn't washed for a few days. People need to know why they didn't get a job and what they can improve on.

"You might say 'just make sure before your interview you check yourself in the mirror and make sure your hair's tidy or you don't have coffee on your lips'.

"He didn't actually say no to her. He basically said he was still interested but she was too fat.

"If I put that person in that job, I would feel responsible for the bullying that could happen. I couldn't put her in a job where she would be judged on the basis of her appearance is absolutely not okay.

"She said 'I want to know honestly what the feedback was'. When I told her, she just laughed and said 'are you joking?'"

Faye has also claimed that one women was recently rejected because she was getting married and the client was concerned she would get pregnant and need time off.

In her post, she even claimed candidates had been rejected for having “garlic breath” and for “stroking a cat” throughout an entire call.

Others who saw the post slammed the boss, with one branding the whole experience as “horrendous”.

Rosie Christie said: "I would love to see a picture of this guy. Would he be a suitable candidate for the cover of Men’s Health? It’s usually those that aren’t a 10/10 that would make these kind of comments."

Caroline Fertnig added: "Just a shame it’s not possible to name and shame. There appears to be a shortage of good new homes sales staff and it would be shame for anyone to work for such a tool!" 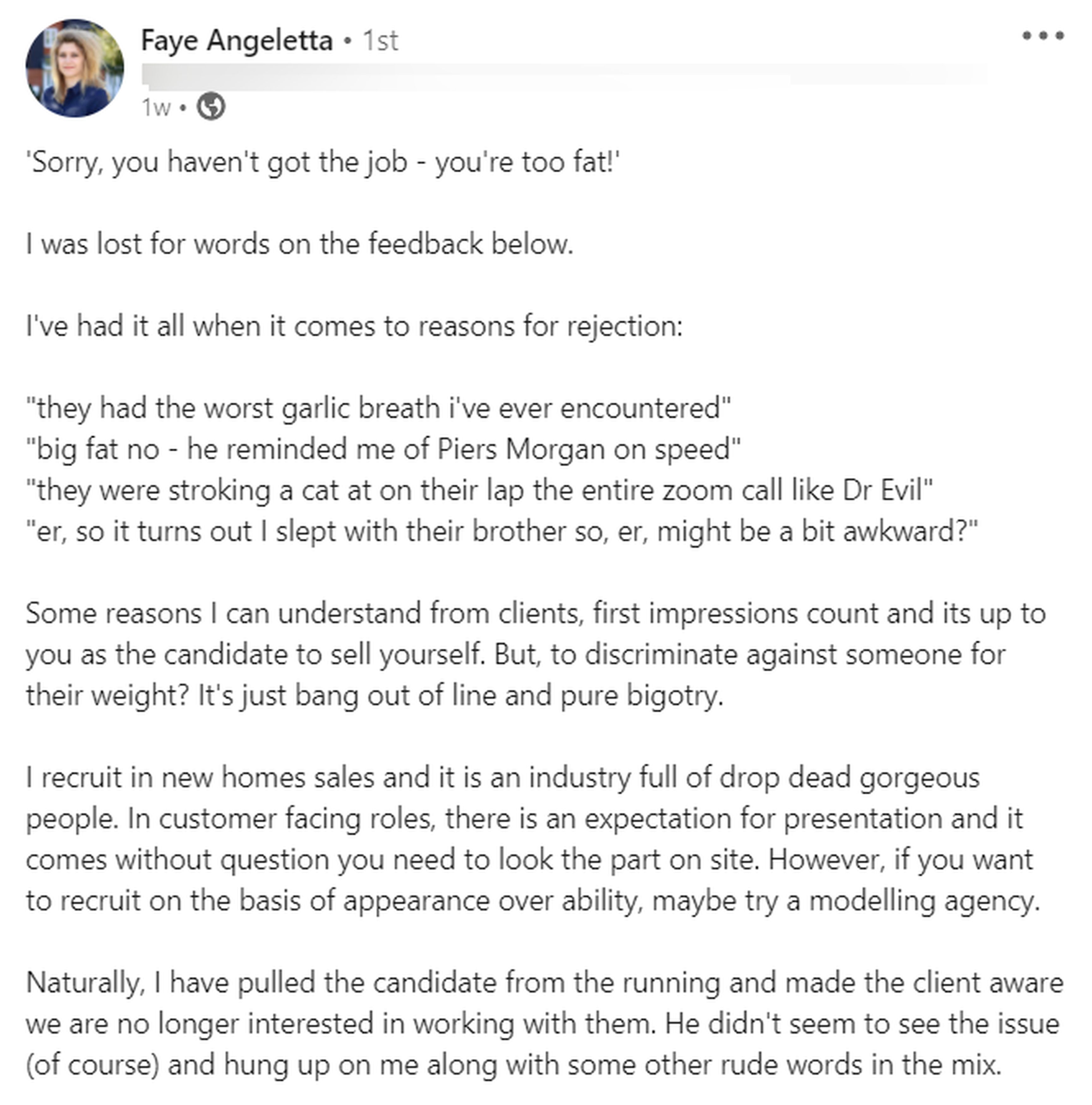 As *NSYNC’s ‘No Strings Attached’ Turns 20, Execs and Collaborators Look Back

Wait, So This Is How Everyone Is Styling Vests Now?