Jakarta: Leaders of south-east Asian countries on Saturday reached consensus on five points towards resolving the crisis in military-ruled Myanmar at a special meeting. 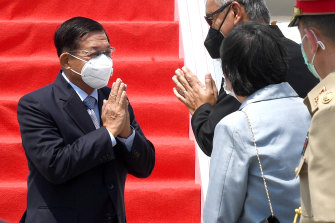 Myanmar’s Senior General Min Aung Hlaing is greeted by Indonesian officials upon arrival at Soekarno-Hatta International Airport on the outskirts of Jakarta on Saturday.Credit:Indonesian Presidential Palace via AP

The consensus also included allowing humanitarian help in the country, releasing political prisoners and appointing a special ASEAN envoy for the Myanmar crisis.

Indonesian president Joko Widodo called for the creation of an ASEAN special envoy to Myanmar to engage with all parties in the crisis-torn country.

The President, who is commonly known as Jokowi, called for aid channels to be open and for Myanmar to release all political prisoners. 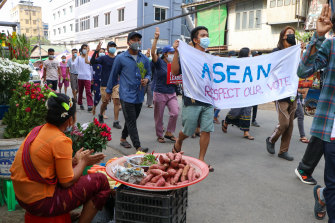 Anti-coup protesters in Yangon, Myanmar on Saturday as General Min Aung Hlaing, the senior military leader behind the coup, met with ASEAN leaders in Jakarta.Credit:AP

Jokowi was speaking after the 10-member bloc’s crisis meeting on Myanmar, aimed at persuading Senior General Min Aung Hlaing, who led the military takeover in February that sparked turmoil in his country, to forge a path to end the violence.

Opposition leaders on Saturday slammed the meeting, saying it legitimised the coup at a time when ASEAN leaders had resisted meeting military opponents.

The Weeknd's Mother Was Disappointed In Him As a Teenager; 'She Looked at Me Like She Had Failed'