Keep your cool! Ascot revellers make sure they are hydrated by downing a few drinks on the hottest night of the year

Revellers bared their flesh and stayed hydrated by downing drinks as they took to the streets yesterday to enjoy the hottest night of the year.

As the country recovered from the sweltering heat which drew people in their thousands to the coast, people inland found their own ways of having fun and keeping cool.

In Leeds groups of young revellers made the most of the weather and headed for a night out in the city centre dressed in skimpy clothing and downing pints.

Meanwhile, racegoers at Royal Ascot, which loosened its dress code due to the heat, had buckets of fun as they spent the day enjoying the horse racing in the glorious sunshine.

It all became a bit much for some people, with pictures showing some having to sleep off their exertions with a mid afternoon siesta.

It came after millions Britons basked in glorious sunshine as the mercury reached 32.7C (90F) in Santon Downham, in Suffolk, breaking the year-to-date record which was set only yesterday.

Overnight temperatures reached a muggy 19C (66F) in the South East, a stark contrast to further north where they remained in single digits in some areas. 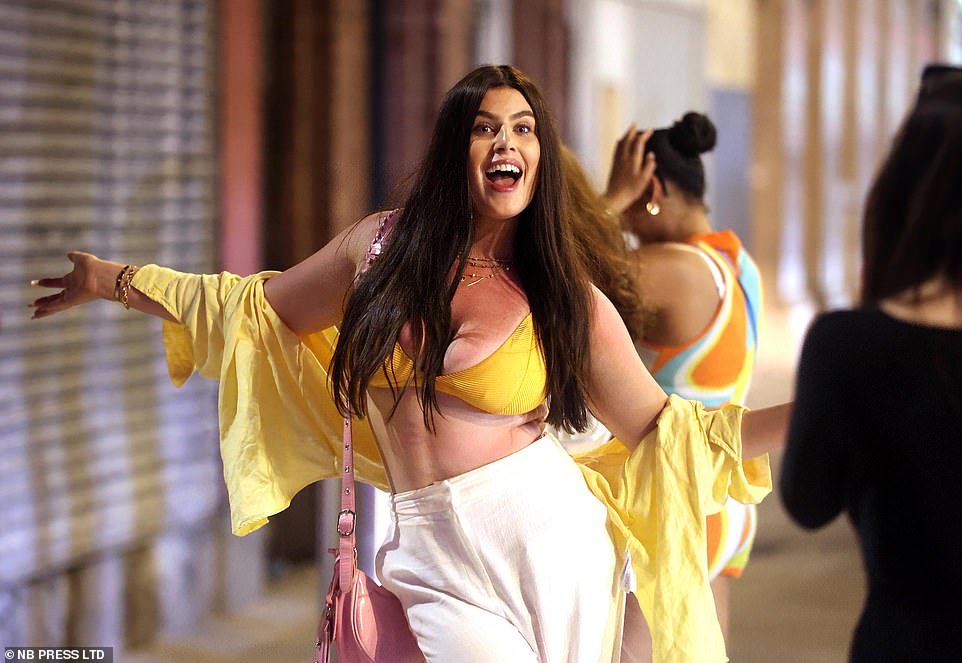 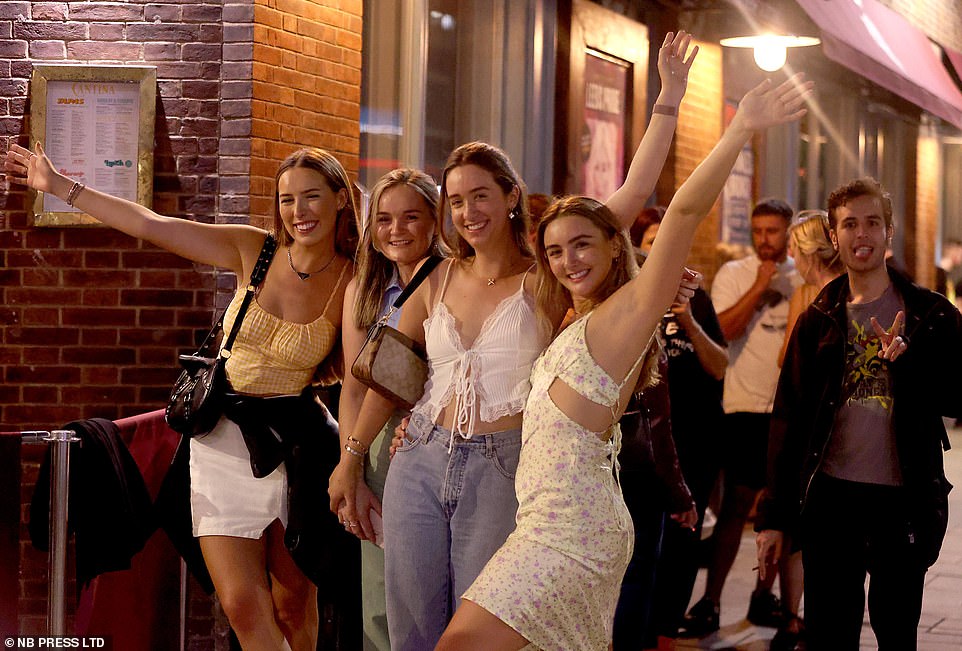 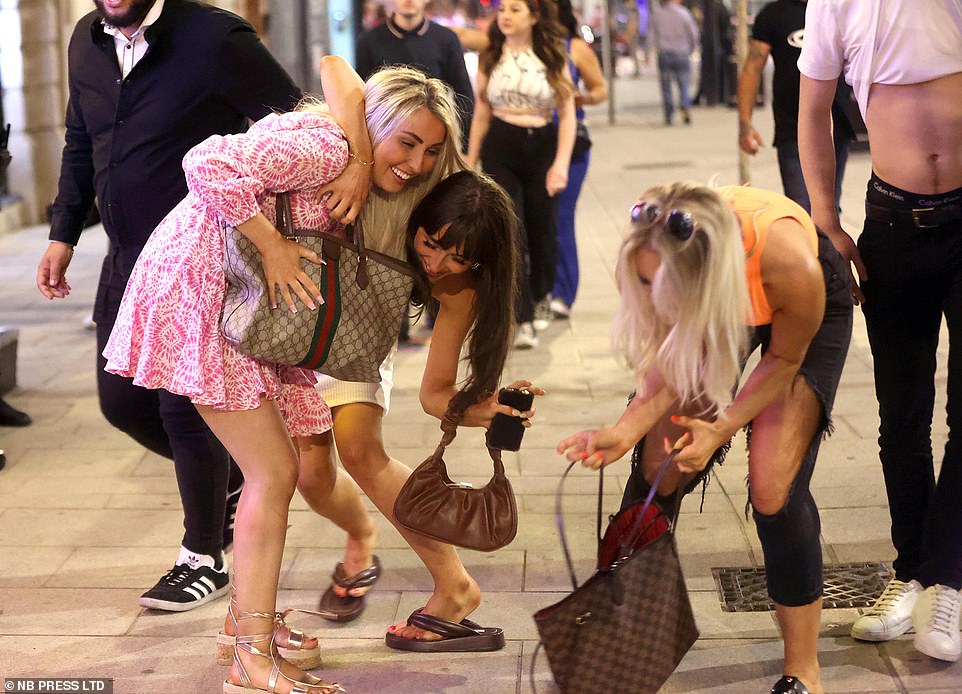 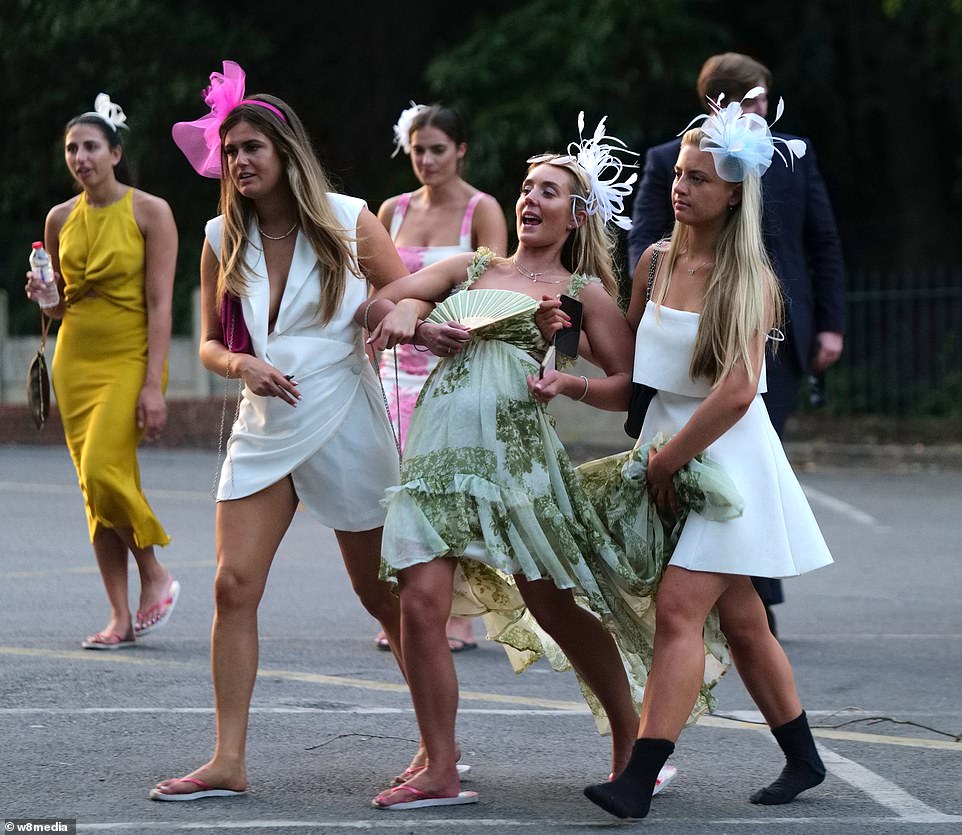 A group of ladies at Royal Ascot, with one looking slightly worse for wear after a long day mixing alcohol and horse racing 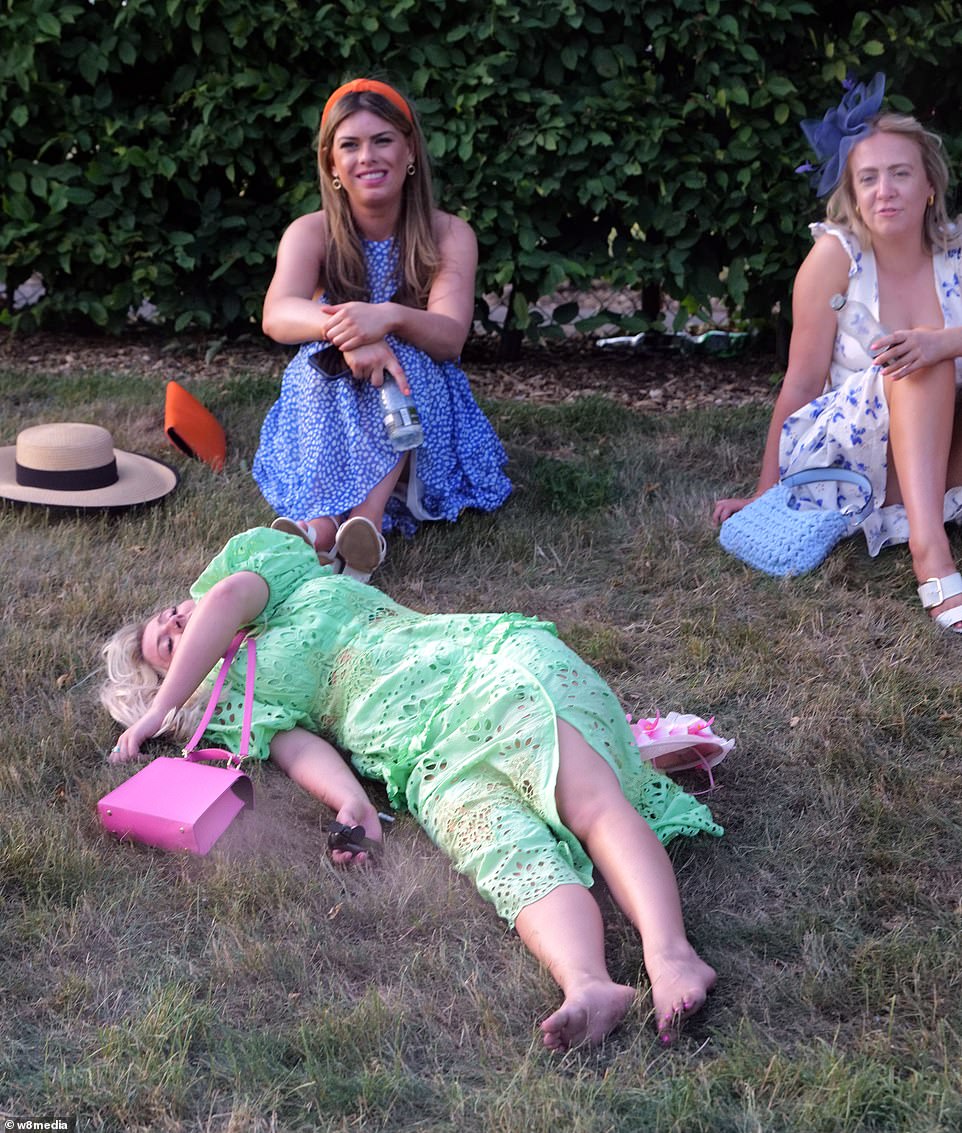 This lady had to have a mid-afternoon siesta to try and sleep off the effects of her exertions at Royal Ascot on Friday, June 17 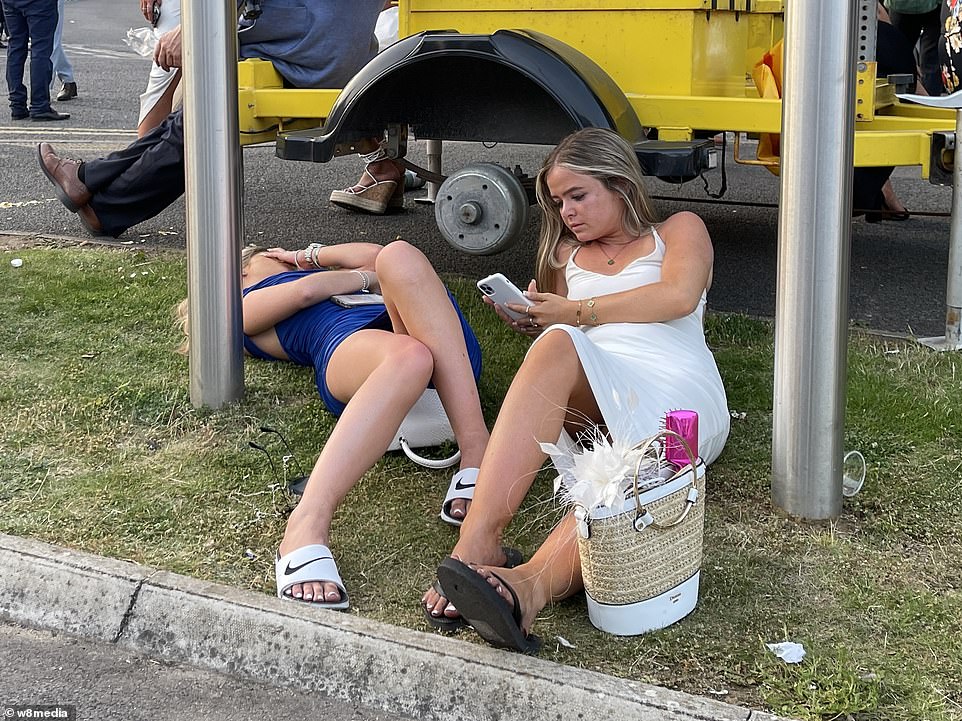 The long day of drinking and horse racing proved too much for some, with some racegoers having to have a lie down at the end of the day 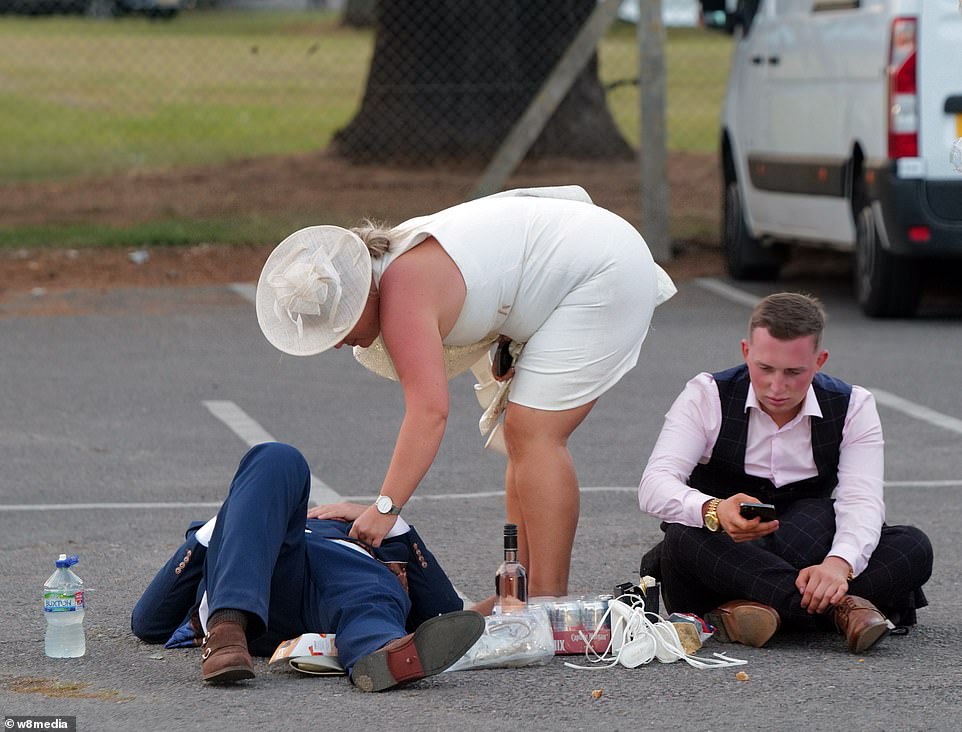 This man needed to rest his head, deciding to do it on the asphalt of a car park at Royal Ascot on Friday afternoon while waiting for a lift home 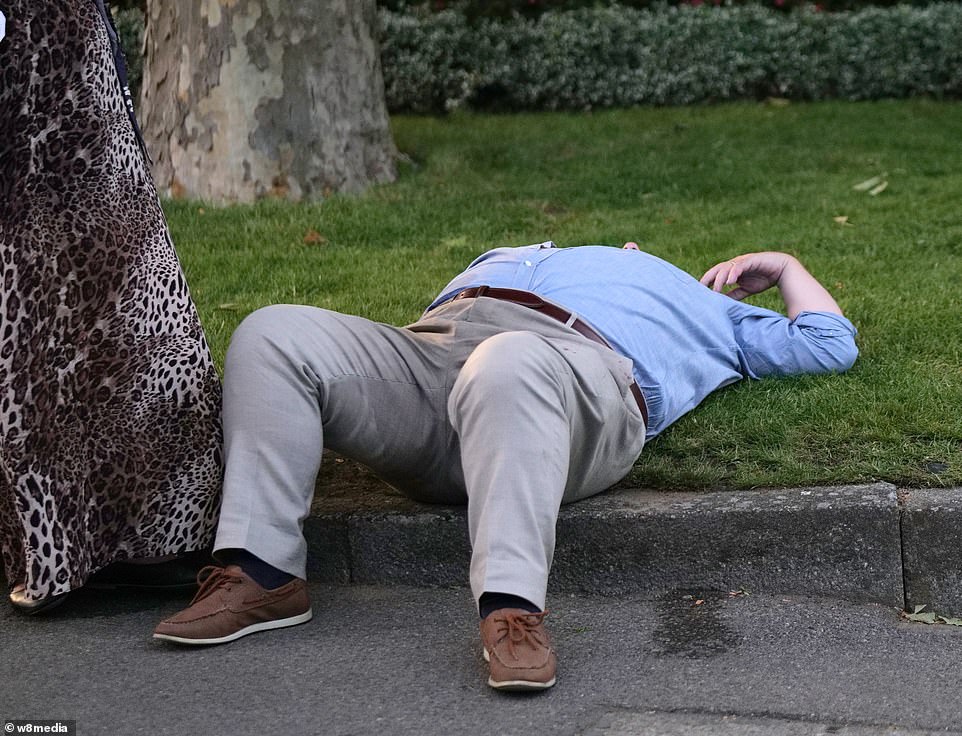 The dress code at Royal Ascot was relaxed by organisers to mitigate the extreme heat. Pictured is a racegoer taking a rest after a long day at the event

There had been suggestions that the all-time June temperature record of 35.6C (96F) could be under threat after a plume of warm air from the continent moved north.

However, temperatures fell just short of this as a slight southwesterly wind meant air was driven in from the cooler Atlantic Ocean, rather than continental Europe where Spain and France are in the grip of a historic heatwave.

That didn’t stop people across the country enjoying the weather, with lidos across London packed early in the morning as swimmers enjoyed a pre-work dip in the hot weather, while large groups of sunbathers were seen sitting on Bournemouth beach as early as 8.30am.

The council in the Dorset town said that by 11.15am, all of its seafront car parks were full and the surrounding roads were ‘very busy’.

Royal Ascot relaxed its dress code for the hot weather, allowing men to remove their ties and all spectators to bring in water and soft drinks – with both moves happening for the first time in the event’s history.

The dress code was relaxed for the first time in 2017 when men were allowed to take off their jackets, while on another occasion racegoers were advised to wear boots on waterlogged ground, reported the Daily Telegraph.

And while many people were enjoying the glorious weather, experts fired warnings for people to be careful the heat and sun.

Dr Vikki Thompson, climate scientist at the University of Bristol’s Cabot Institute for the Environment, said: ‘Heatwaves are one of the most deadly natural hazards. In the UK, 3,000 deaths were linked to heatwaves in 2021.

‘The health issues related to heat include direct effects, such as heat stroke and cardiovascular failure, and indirect effects including poorer mental health and an increase in accidents such as car crashes and drownings.’

Sadly one person is already through to have lost their life in the heatwave – a 37-year-old man died after ‘getting into difficulty’ in a lake at Pitville Park in Cheltenham, Gloucestershire, on Thursday evening.

Emergency services had been called to the park at 5.47pm on Thursday. Despite crews’ best efforts to save the man, he was pronounced dead at the scene. His death is not currently being treated as suspicious. 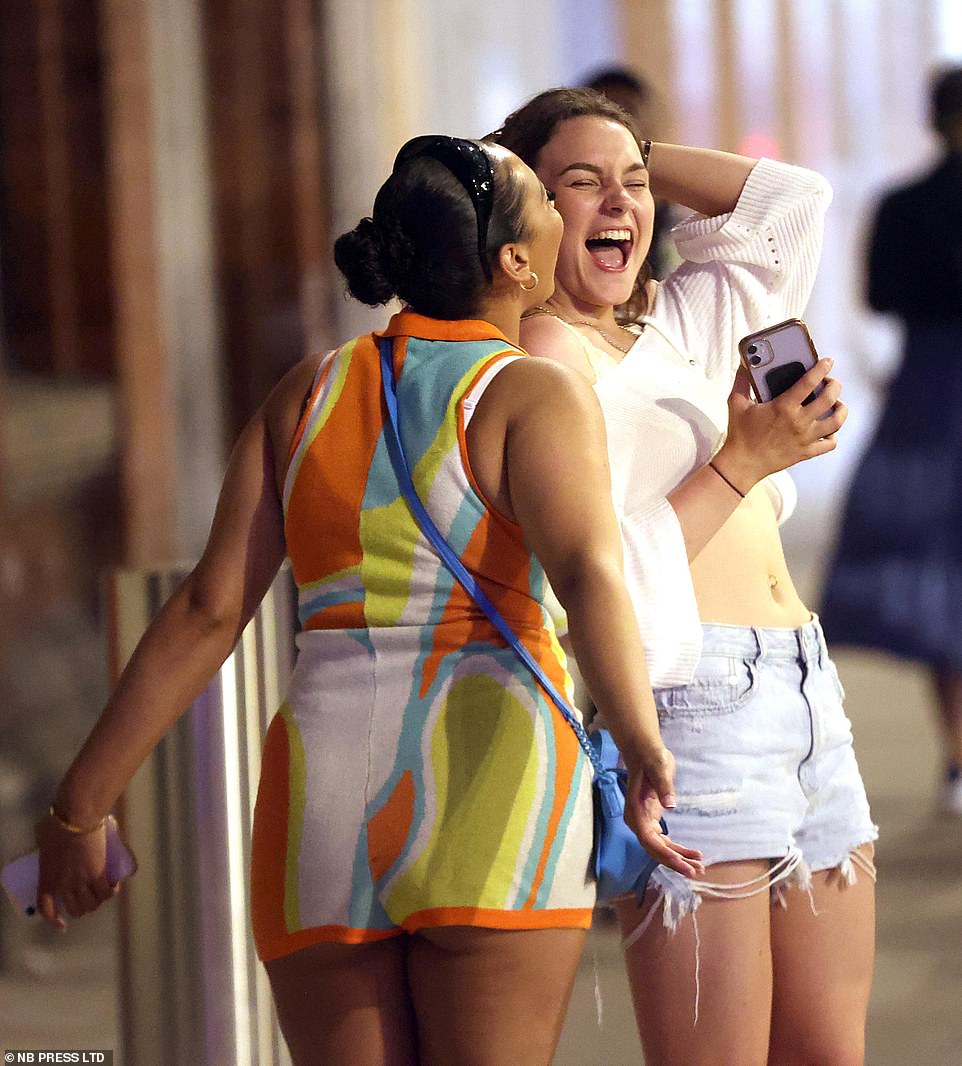 These two women in Leeds appeared to be having a cracking night out on Friday, joining other revellers in enjoying the warm weather 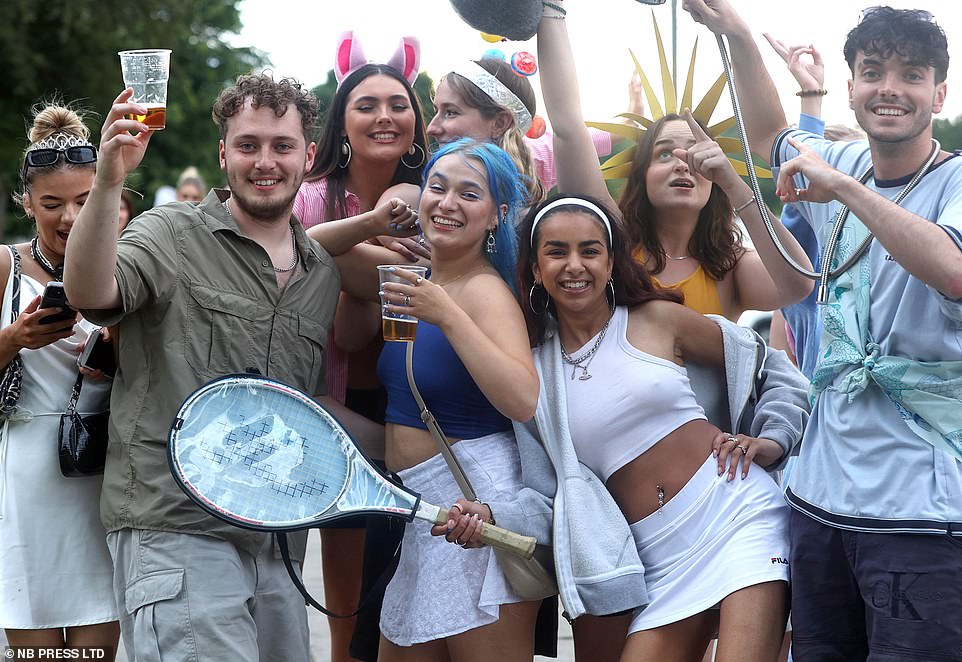 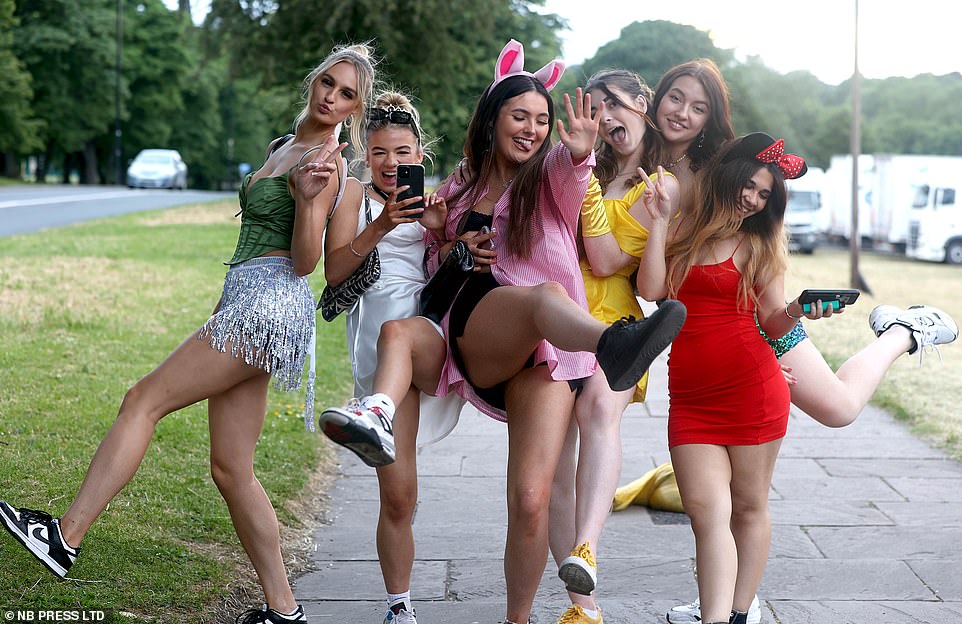 In a scene that was common in cities across the country yesterday, this group of revellers headed for a night out after the warm temperatures 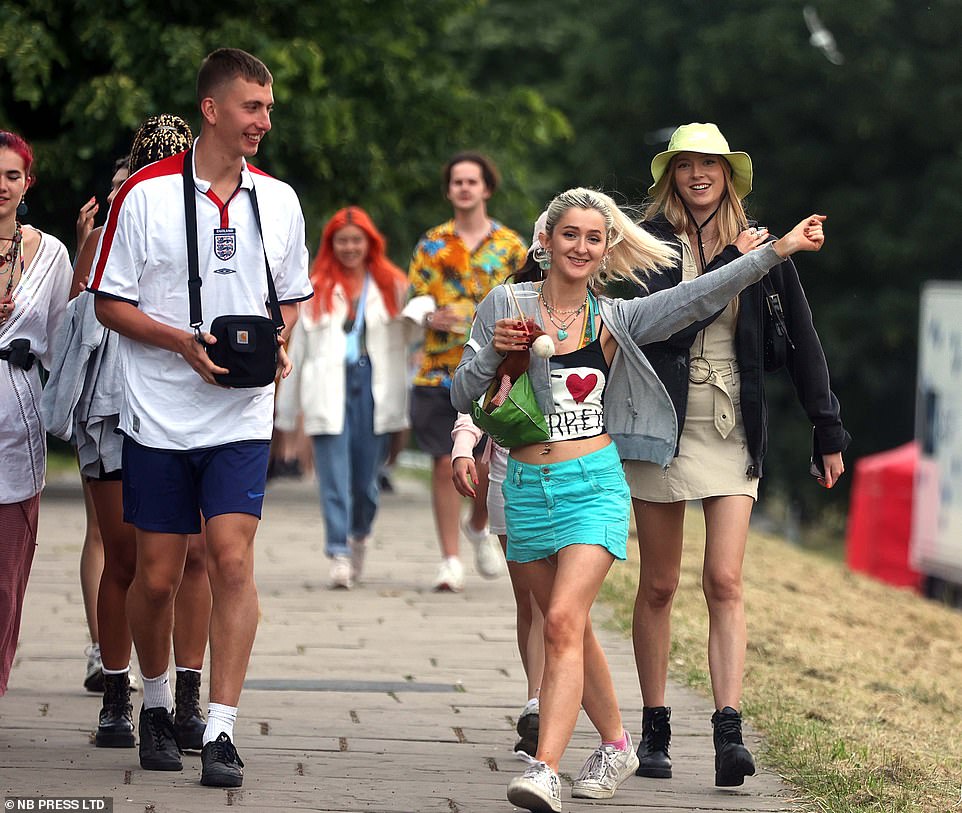 With temperatures peaking at more than 32C yesterday, revellers in Leeds made the most of it before things cool down over the weekend

The heat is expected to lessen somewhat today according to forecasters, with  the Met Office predicting relatively cool highs of 25C (77F) on the south coast today, with temperatures inland and on coastal areas further north staying below 20C (68F).

The scorching continental air will be pushed away with a cooler blast from the Atlantic on Saturday and Sunday with temperatures expected to drop to a low of around 15C (59F) by the end of Sunday.

Meanwhile, rain and cloudy weather are expected to hit Manchester and parts of the north west of England later on Friday, while parts Hull and the surrounding areas in the north east could also experience some showers.

People in the capital were pictured eating ice creams as early as 10am; police patrolled beaches in South Wales in plain clothes in a bid to spot ‘concerning or predatory behaviour’; racegoers drank water as they waited to enter Royal Ascot; and a bus burst into flames at Streatham Hill in South London although the cause is not yet known.

Parts of the UK were hotter than Jamaica and the Maldives yesterday- but people in Northern Ireland, North West England and Scotland were warned to brace for cooler weather and rain.