After Rio Tinto’s non-response to the Juukan Gorge disaster it’s good to see the miner has swung sharply the other way.

Or how else to explain the near three-month listening tour new Rio Tinto chief executive Jakob Stausholm has undertaken since arriving here from the UK on Australia Day?

The softly spoken Danish executive succeeded Jean-Sebastien Jacques as chief executive on January 1. This was after the mining company’s explosion at the 46,000-year-old Aboriginal rock shelters at Juukan Gorge in the Pilbara caused a corporate implosion that claimed Jacques, two of his deputies and eventually chairman Simon Thompson after a shareholder revolt.

Stausholm has already pledged to “restore trust” in the company. And since his arrival in Australia in January, sources say he has deliberately sought out “warts and all” feedback to hear how the company got it so wrong.

Meetings have so far included former chief executives Leigh Clifford – who spent 37 years with the miner – and Leon Davis, who wrapped up his tenure heading the mining giant in 2000 and astutely observed the value of iron ore in the Juukan Gorge was “absolutely not” worth the damage wrought to the miner’s brand by the detonation.

There’s no word on the reception he received from the two former bosses, but those inside the firm say Stausholm has heard his fair share of wrath from other groups since touching down. No surprises there.

But Stausholm must be doing something right. On Monday night, like a nervous Featherington sister being presented at court in Bridgerton, the Rio chief played debutant at the Business Council of Australia’s annual dinner, the most prestigious event on the calendar.

Stausholm got a special mention from Queen Charlotte, we mean Prime Minister Scott Morrison, at the dinner, which attracted more than 400 guests. His reception was in stark contrast to that of outgoing chairman Thompson, who visited Australia last November but whose only government meeting was with Resources Minister Keith Pitt for 15 minutes at Brisbane Airport. 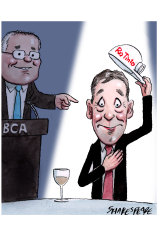 But if there was any question about the hierarchy in the room, the BCA’s table list expertly overseen by chief executive Jennifer Westacott spelt out the peak body’s priorities loud and clear. The Prime Minister sat at the centre of the room on a table including Telstra chief executive Andy Penn, Coca-Cola Amatil managing director Alison Watkins, Transurban chief executive Scott Charlton and BCA president Tim Reed.

It may come as news to some readers to learn that one of Elon Musk’s most trusted lieutenants is an Australian executive who used to work for, er, Telstra. But 57-year-old Robyn Denholm, who was born in Milperra in south-west Sydney and has chaired Musk’s Tesla empire since late 2018, is slowly broadening her corporate footprint back in her home city. Denholm has taken on an advisory role inside the prominent venture capital fund Blackbird Ventures, where she is acting as an informal mentor to a number of its startups.

Founded nine years ago by Niki Scevak and Rick Baker, Blackbird has become one of the country’s most formidable startup investors with stakes in unicorns including online graphic design giant Canva and workplace culture tool CultureAmp. At the same time, it has attracted investment from heavyweight institutional investors including the Future Fund, AustralianSuper and Hostplus.

While sources inside Blackbird were tight-lipped about Denholm’s role at the firm, where the vibe is much more T-shirt than suited and booted, it represents the executive’s most significant local appointment since she quit as Telstra’s chief bean-counter in late 2018. That resignation, to take on the chair job at Tesla, came less than two months into the role and shocked the local corporate establishment. But it has no doubt paid off for Denholm, given Tesla’s stratospheric share price and her lucrative options, some of which she sold for a reported gain of nearly $100 million earlier this year.

After Dutton made a government plane unavailable at the last minute, the Labor senator was forced to take a Virgin flight instead, an initial inconvenience that has paid off.

“I would like to thank Minister Dutton for cancelling the plane and inviting me to take a commercial flight. Because of that I ended up having four days on the island instead of two and had multiple opportunities to meet the Biloela family rather than the one hour planned with the committee trip.”

And multiple media opportunities as well. It seems Dutton’s manoeuvrings are a classic case of the Streisand effect, named after the famed singer who once attempted to suppress a story, which only drew more media attention. In other KK news, she is on the hunt for a new media spokesperson to replace Lucy Bradlow, who is leaving after three months in the job.

Woman sank fishbowls of cocktails, Malibu and prosecco every night on a boozy girls’ trip to Majorca… unaware she was EIGHT MONTHS pregnant

Weed beer is near, and it’s gonna be weird