Last week turned dark for Australia’s Indonesian neighbour when a parent and four young children detonated suicide bombs in front of three churches in the city of Surabaya, East Java. Theirs were not the only bombs discovered that day, nor were they the only family with intent to kill — two other families, fortunately less successful, were later revealed to be part of the same plot. Just days before the Surabaya bombs, terrorist inmates seized control of a Jakarta prison and slaughtered five officers. The police responded swiftly, rounding up suspects across the country. The chilling message was clear that terror is all around. 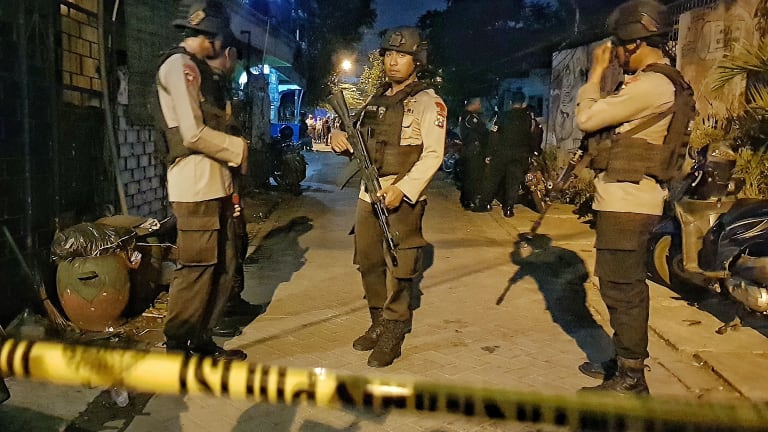 Armed police at a site where a suspected terrorist was shot dead and four members of his family apprehended after the Surabaya attacks.

Indonesians grappled with these shocking events in different ways. Almost all condemned the acts of terror; nearly none laid blame for the violence on Islam. The narrative distinguishing Muslims from terrorists is dominant — but here ends the agreement. How the country arrived at this juncture and what needs to be done are hotly debated.

One line of argument blames the government for failing to prevent the tragedy. Conspiracy theories abound, including suggestions that the deadly attacks were a ploy to distract attention from other critical issues. Speculation about who orchestrated the attacks, with insinuations of state involvement, have spread to national politics, multiplied and amplified by social media.

Others explain the predicament by linking terrorism to growing intolerance, often so closely as to characterise individuals and groups with intolerant views as “radicals” and “extremists” with some even calling for public measures to limit the freedom of movement and expression of those who espouse these views.

Neither of these approaches is useful in formulating a national agenda to move forward together, an agenda that must encompass multiple goals: addressing intolerance, combating terrorism, and upholding democratic values.

Simplistic theories about state or institutional conspiracies overlook the bleak reality that a handful of Indonesian citizens, using the Islamic lexicon, chose to kill both themselves and their young children in order to inflict terror and death on others. Last week, these “others” included both Catholics and the Indonesian police, the latter because they are the public face of the supposedly “un-Islamic” state in its fight against terrorism. It is reckless, to say the least, to shrug off the weight of this problem using the simple narrative of conspiracy.

Unfortunately, in response to decades of growing intolerance in Indonesia, some defenders of tolerance have attempted to forcibly silence individuals they consider to hold intolerant views, citing the dire need to prevent extremism, and using the power of networks and intimidation to act in ways that others may see as undemocratic or as persecution. There is a sense of urgency that has allowed this to take place and to be accepted by many who would otherwise be in the forefront of support for democratic values.

A national trauma like the bombings in Surabaya should bring together groups with different interests and outlooks, but the gap remains wide open in Indonesia, for two principal reasons. One, Indonesia is approaching a highly political year: both legislative and presidential elections will take place in 2019. Narrow political interests have clouded the judgment of elected leaders and fractured the common narrative of what took place and how to move forward.

Second, after witnessing the primordial impulses that were awakened in the 2017 Jakarta elections — when Islamist groups successfully demanded the ouster and imprisonment of the governor — and fearing the rise to power of groups that use persecution as a tactic, the defenders of democratic pluralism seem ready to retaliate. Though they may use the language of counter-terrorism, their targets also include non-violent extremists.

Between these two extremes, bombarded by competing narratives of what has happened and why, Indonesians need to think about how to address intolerance and terrorism while upholding democratic values. Politicians and commentators need to be more honest about how they talk about these issues, and refrain from promoting conspiracy theories that serve only to sharpen divisions. And Indonesians must learn to distinguish between intolerance and terrorism. Confusing the two will only create stigma — or worse, anarchy — in their communities.

This is the pressing new challenge to Indonesia’s democracy at the brink of a highly political year.

Sandra Hamid is the Asia Foundation’s country representative to Indonesia. She is in Australia as a guest of the Lowy Institute.

Are you a real ‘foodie’? Check out the 50 signs that prove you’re a true gastro expert

Royal Ballet and Liam Scarlett part ways after an investigation