‘Why is Banksy trying to claim my work?’ Rival graffiti artist insists new hula hoop mural in Nottingham is actually HIS and he’s got the stencil to prove it – after Banksy posted image of painting on Instagram

A graffiti artist has insisted a mural of a girl using a bicycle tyre as a hula hoop is his own, despite Banksy sharing a picture of the piece on his own Instagram page – the anonymous artist’s usual way of authenticating his work.

Itchers, based in Birmingham, has assured local media in Nottingham that the artwork is his own, saying he even has the stencil to prove it.

The piece appeared on a wall last Tuesday on the corner of Rothesay Avenue in Lenton, Nottingham – but Banksy didn’t share an image of the mural on Instagram until Saturday.

Once it was ‘confirmed,’ as a Banksy, the wall mural was said to be worth more than street’s average house price of £214,280. 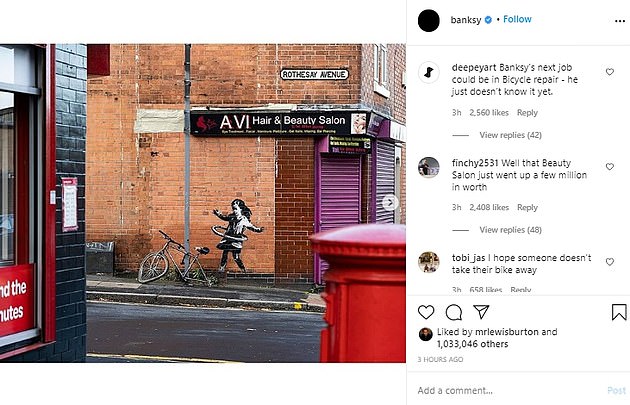 Banksy posted an image of the mural on his Instagram account on Saturday, seemingly putting an end to speculation as to the provenance of the graffiti – but a Birmingham based artist has now staked his own claim to the piece

But Itchers is defiant that the artwork is his own, telling NottinghamLive: ‘It’s definitely mine, I’m not sure what he is doing to be honest, I’m flabbergasted.’

Itchers says he is unsure whether the world-famous artist is just trying to promote his work, adding: ‘I just want answers from him, and I want to know why he is trying to claim my work.

‘I’ve got the copy of the stencil I used – it’s clearly mine.’

Itchers, also known as Hers, has previously revealed himself to be behind works that were mistaken for Banksy’s in Rugby and Lichfield, Staffordshire. 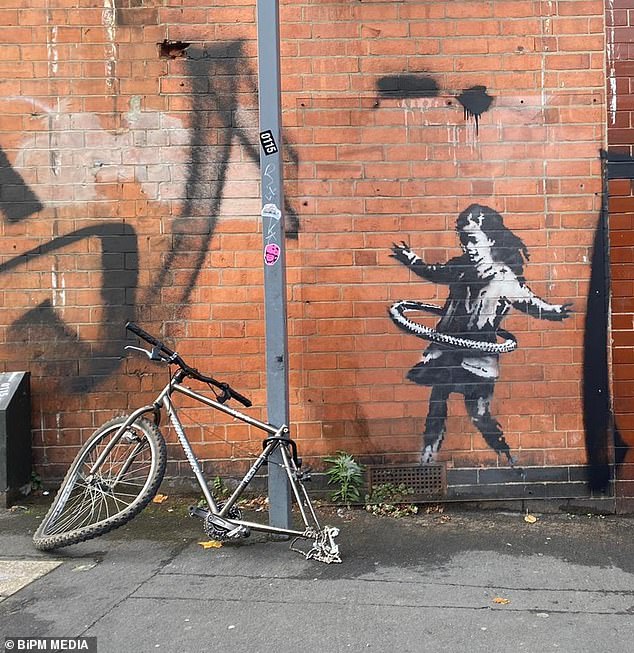 Once reports came that the piece was confirmed as a Banksy, the wall mural was said to be worth more than the average house price of £214,280 on Nottingham’s Rothesay Avenue, where the work appeared last Tuesday

The piece appeared on a wall last Tuesday on the corner of Rothesay Avenue in Lenton, Nottingham.

Sprayed in black and white, the tongue-in-cheek image sits just behind a battered bike chained to a lamp post with an infinity lock.

The bike is missing a tyre.

Surinder Kaur, 42, who runs the beauty salon next to the artwork, said the bike had appeared at the same time as the mural.

‘He brought the bike with him – there is one tyre on the bike and the other tyre is in the picture as the little girl’s hula hoop,’ Kaur said. 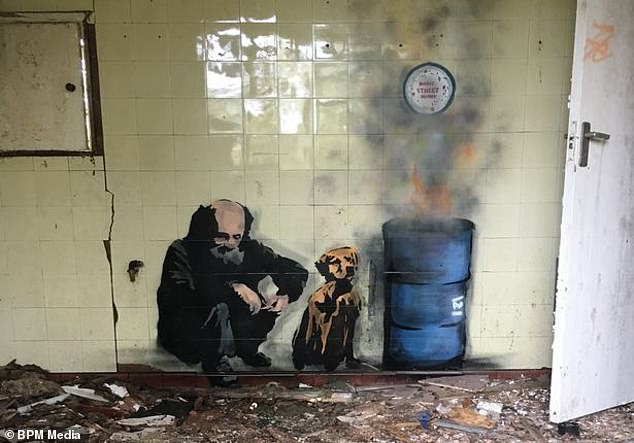 Itchers, who is also known as Hers, has created his own graffiti in various locations, including in an abandoned house in Staffordshire, above 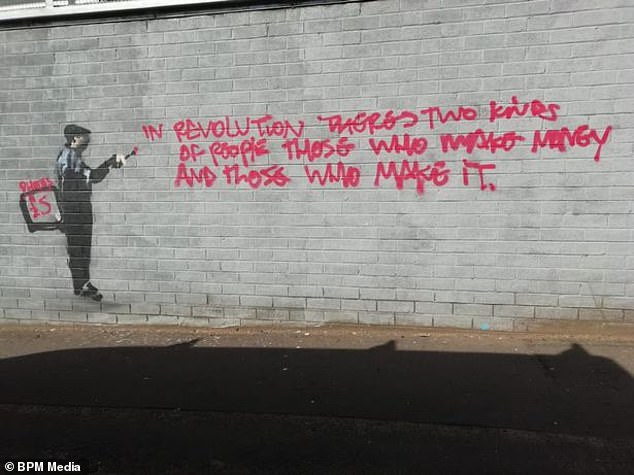 She told the PA news agency that within hours, the council had rushed to protect the piece by placing clear plastic sheeting over it.

Vandals have sprayed painted over the plastic two or three times already.

‘Everyone is very excited and many, many people are coming to see the picture,’ Ms Kaur said.

‘Everyone was confused about whether it was real or not real but it’s an amazing picture, it’s amazing art.’ 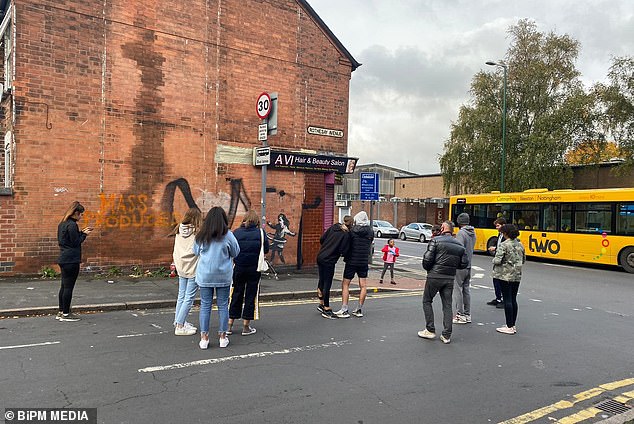 While the mural has attracted a lot of attention, it is not not yet clear whether it will be removed and sold as has been the case with some of Banksy’s previous works

Banksy’s ‘Devolved Parliament’ – featuring the Houses of Parliament filled with chimpanzees – sold for £9.9 million last year, setting a new record for his work according to valuation website MyArtBroker.com.

Many of his murals have also been lifted from walls and sold, with Kissing Coppers – an image of two male police officers in an embrace on the side of a Brighton pub – selling for £350,000 in 2011.

Ms Kaur said she is renting the property and so will not be entitled to any money should the mural be sold.

Ms Kaur, who has only recently reopened following lockdown, said lots of people have been coming into her salon to ask about the mural, but she is not yet sure whether it will create a boost for her business.

‘Let’s see – I’m not sure about anything right now,’ she said.

In July, a coronavirus-inspired Banksy artwork appeared on a London Tube train.

A series of rats were stencilled around a carriage wearing face masks, sneezing or clutching hand sanitiser in a piece named If You Don’t Mask, You Don’t Get.

Transport for London swiftly removed the piece in line with its anti-graffiti policy, but said: ‘We appreciate the sentiment of encouraging people to wear face coverings.’

This summer, Banksy used the sale of his artworks to finance a 30-metre motor yacht to rescue migrants trying to cross the Mediterranean into Europe.

A 2006 Banksy titled Oh My God could fetch up to £1million when it goes up for auction this week.

Bonhams in London is hosting a Post War and Contemporary Art auction on Thursday evening, which will see a handful pieces go up for sale, including on piece by Damien Hirst. 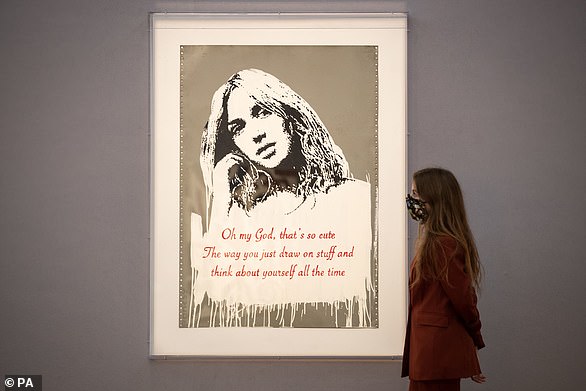 Oh My God, by Banksy, is expected to fetch between £700,000 and £1million when it goes up for auction at Bonhams in London on Thursday

But the pick of the bunch will arguably be Oh My God, which is valued at between £700,000 and £1million.

The artwork, which was spray painted on a piece of found metal, is said to take inspiration from Girl with a Pearl Earring, and first appeared at his seminal Barely Legal exhibition in Los Angeles in 2006. 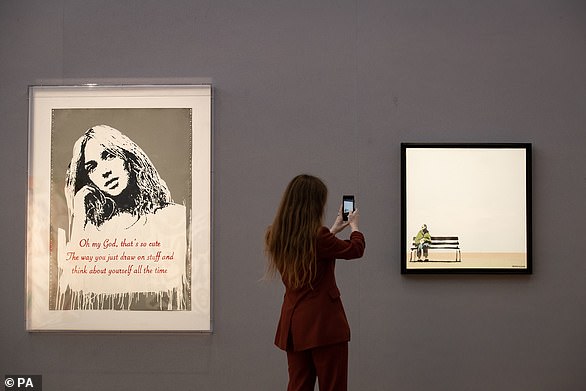 The artwork (left) is said to take inspiration from Girl with a Pearl Earring, and was spraypainted on to a piece of metal. Another of Banksy’s works, Weston Super Mare (right) is also going up for sale, but for a much lower guide price

Describing the piece, Bonhams wrote: ‘Oh My God is amongst those most rare of Banksy works whose subject appears completely unique.’

One of Banksy’s earlier works, Weston Super Mare, from 1999, will also be up auction. 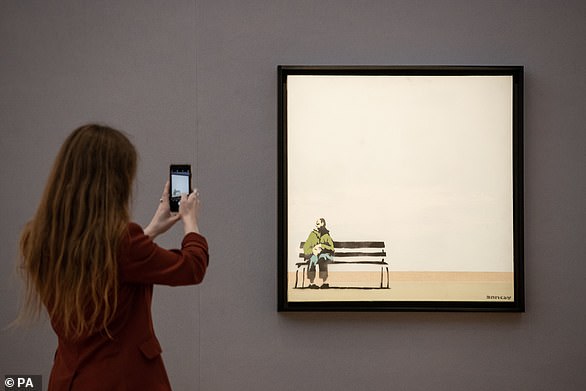 Bonhams describes Weston Super Mare as ‘a work of searing honesty and self-revelation; a very personal painting that gives a clear, if very rare, insight into the artist’s background and personality.

The auctioneer adds: ‘Executed in 1999, this work is one of the earliest and most significant canvases by the artist to come to auction.’